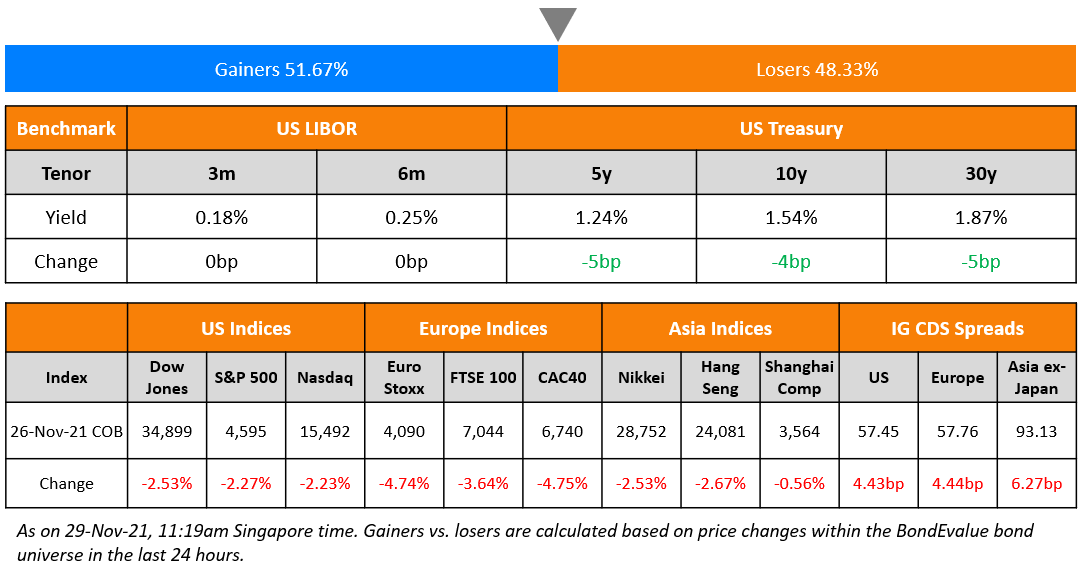 US equity markets dropped sharply with the S&P and Nasdaq falling 2.3% and 2.2% respectively on Friday after concerns over the new Omicron B.1.1.529 variant shook global markets. All sectors ended in the red led by Energy, down 4.1% and Financials down 3.3%. US 10Y Treasury yields fell ~13bp to 1.47% on Friday following the latest variant’s concerns. It has recovered slightly today to 1.54%. European markets were lower with the DAX, CAC and FTSE down 4.2%, 4.8% and 3.6% respectively. Brazil’s Bovespa ended 3.4% lower. In the Middle East, UAE’s ADX was down 1.8% while Saudi TASI was down 4.5% on Sunday. Asian markets have opened lower – Shanghai, HSI, STI and Nikkei were down 0.1%, 0.6%, 1% and 0.6% respectively. US IG CDS spreads and HY CDS spreads widened 4.4bp and 20.7bp respectively. EU Main CDS spreads were 4.4bp wider and Crossover CDS spreads were 21.9bp wider. Asia ex-Japan CDS spreads widened 6.3bp.

The course will be conducted in-person at 79 Robinson Road, Singapore on 1-2 December. 90% IBF funding is available to eligible company-sponsored Singaporeans & PRs. Click on the banner below to sign up.

Nanjing Lishui Urban Construction raised $60mn via a 355-day bond at a yield of 2.45%, unchanged from initial guidance. The bonds are unrated. Proceeds will be used for general corporate purposes. The bonds are issued by Lijian International and Nanjing Lishui Urban Construction Group has provided a keepwell. The keepwell provider is a local government financing vehicle for the Lishui district government in Nanjing, Jiangsu province. It provides infrastructure construction, affordable housing, public transportation, and water supply and water treatment.

Put-Call ratio is a ratio calculated based on option contracts which compares either the volumes or open interest of put options divided by those of call options for a particular period. Buying a put option is a bearish bet while buying a call option is a bullish bet, and hence, a higher put-call ratio is interpreted as a bearish bet on the underlying security (stocks, indexes, ETFs. However, sometimes the ratio is also seen as a contra-indicator since the savvier traders sell options. Hence it is preferred to look at the ratio alongside the movement in the underlying rather than in isolation, to get a better gauge of the market sentiment. The iShares 20+ Year Treasury Bond fund (TLT) ETF put-call open interest ratio was at its highest in more than a year with Bloomberg noting that it indicates more bearish bets on treasury long-tenor bonds than bullish bets.

“With the likes of the Fed and Bank of England already behind the curve, it is unlikely that the new variant will change their direction of travel at this stage… Financial conditions remain easy and inflation continues to surprise on the upside, giving the Fed limited room to delay the withdrawal of unprecedented monetary support.”

“The market and the Fed are very data dependent, and if the next few inflation reports show no sign of significant moderation… The first step is to get more aggressive with tapering, and January is on the table for reducing more of their current extraordinary policy accommodation.”

“The narrative for a steeper curve was the story at the start of this year when the Fed was telling investors they would let inflation run hot… The moment for the steepener has passed by. Now the Fed is focused on maintaining its inflation credibility, and you trade that by flattening the curve.”

“I think it’s time for a change in policy at the Fed,” he said. “I was of the view that this may be easier with someone who hasn’t repeated over and over again that inflation is transitory. Inflation is not transitory and it’s really important for the Fed to realize this… What I’m worried about is that it will ease because the Fed is going to have to hit the brakes. So rather than hit the brakes hard next year, it’s much easier to ease your foot off the accelerator starting now.”

“We have a lot of momentum in the economy right now. And that momentum, I’m hopeful, will be able to carry us through this next wave, however it turns out… We’re not going to let inflation get out of control” 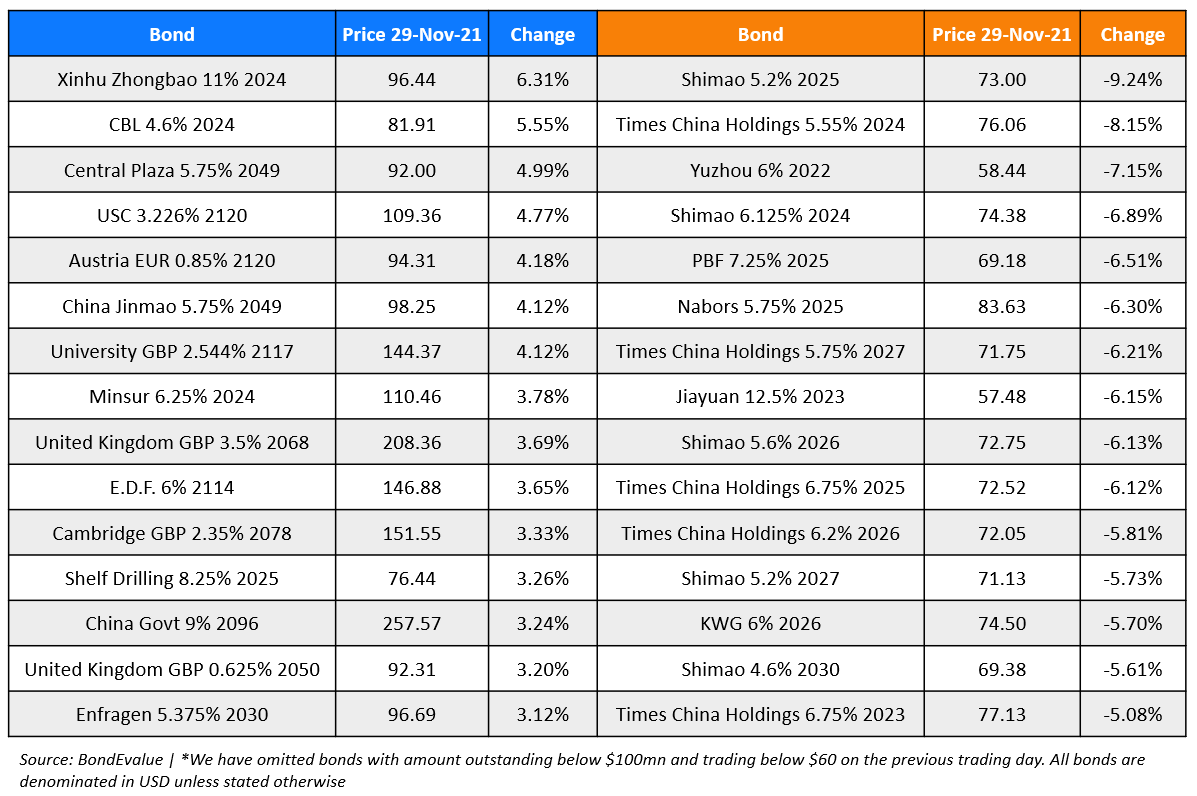