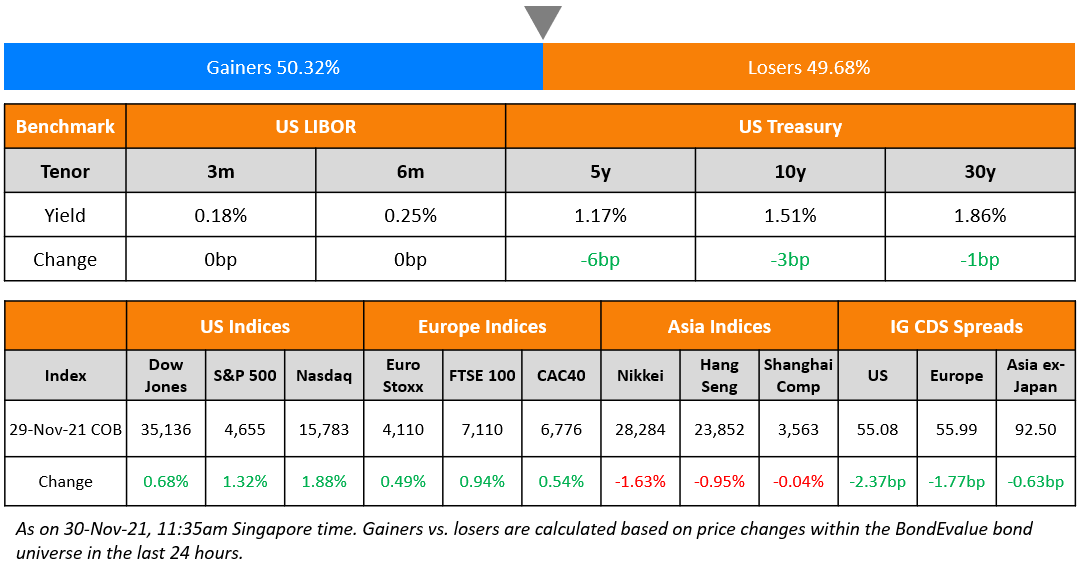 US equity markets recovered well on Monday with the S&P and Nasdaq rising 1.3% and 1.9% respectively after the sharp sell-off on Friday as some optimism emerged on the Omicron variant’s impact. All sectors ended in the green led by IT, up 2.6%. US 10Y Treasury yields fell 3bp to 1.51%. European markets were higher with the DAX, CAC and FTSE up 0.2%, 0.5% and 0.9% respectively. Brazil’s Bovespa ended 0.6% higher. In the Middle East, UAE’s ADX was up 2.2% and Saudi TASI was up 0.2%. Asian markets have opened mixed – Shanghai and Nikkei were up 0.2% and 0.6% while HSI and STI were down 1.1%, 0.6% respectively. US IG CDS spreads and HY CDS spreads tightened 2.4bp and 10bp respectively. EU Main CDS spreads were 1.8bp tighter and Crossover CDS spreads were 10.1bp tighter. Asia ex-Japan CDS spreads tightened 0.6bp.

US Dallas Fed Manufacturing Index came slightly lower in November at 11.8 vs. 14.6 in October. German CPI YoY for November inflation rose 5.2% vs 5% forecasted. 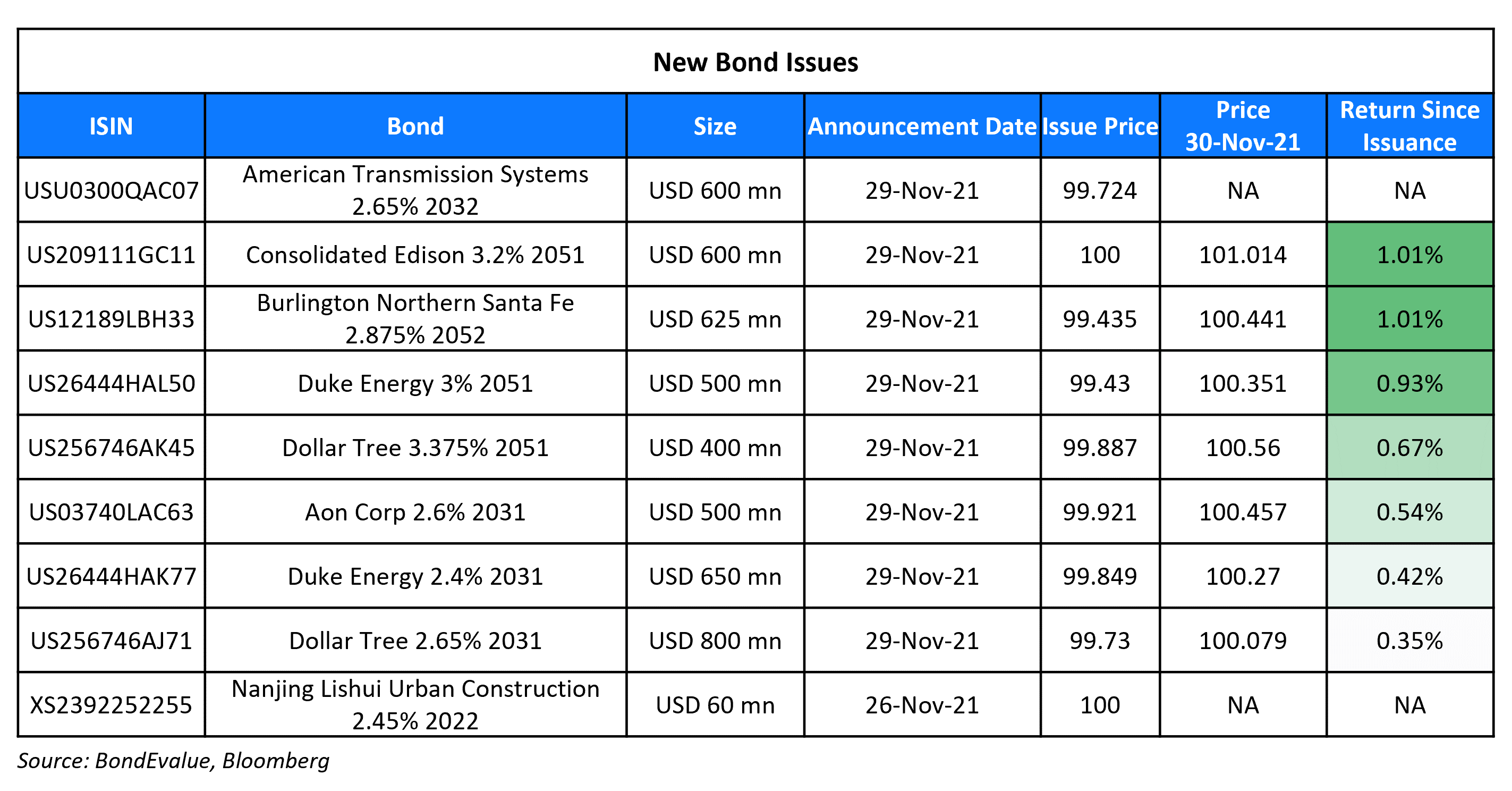 Qingdao Development Area Investment Construction Group raised $50mn via a 3Y bond at a yield of 4.6%, unchanged from initial guidance. The bonds are unrated. Proceeds will be used for working capital. The issuer is an infrastructure construction and state-owned asset management entity in the Qingdao West Coast New Area in China’s Shandong province.

Green bonds are bonds whose proceeds are used towards financing projects that have a positive environmental impact such as renewable energy, energy efficiency, pollution and prevention control, clean transportation, climate change adaptation, green buildings etc. The first green bond was issued by the European Investment Bank in 2007. Since then, the bond markets have seen green bond issues from supranationals such as The World Bank, sovereigns and corporates. FT reports that green bonds are facing new questions over authenticity as companies and countries are pushing its boundaries.

“The recent rise in Covid-19 cases and the emergence of the omicron variant pose downside risks to employment and economic activity and increased uncertainty for inflation,” Powell said. “Greater concerns about the virus could reduce people’s willingness to work in person, which would slow progress in the labor market and intensify supply-chain disruptions.”

“At this point, I am confident that our recovery remains strong.” On the issue of the debt limit, “I cannot overstate how critical it is that Congress address this issue.” “If we do not, we will eviscerate our current recovery.”

“It reveals that Treasuries still provide very good cross asset hedging.” “When there is a macro shock, the bid can be ferocious – strong inflation not withstanding.”

“The consensus now seems to be that government bonds are not doing their job,” she said. “That argument fails to consider the relative importance of bonds in reducing overall portfolio volatility.” “Bonds will continue to provide diversification if bond volatility is lower than equity volatility, even if the correlation is positive,” Ryan said. “They might a less valuable assets compared to their own history as their expected returns over longer-term horizon are much less than equities. But if you want to make sure that you are not going to suffer a wild price swing, then bonds serve that purpose.”

“It’s been one of the more difficult years to be a fixed income PM — we’re certainly not invited to many dinners.”

Alexis Duvernay, investment specialist at M&G Investments
“There’s been some talk about a Lehman Brothers moment and we don’t really see that happening.” “The market as a whole has been quite resilient.” “It’s really focused on the real estate sector”.

Matthew Chow, an analyst at S&P

“I think we can say it is a sector-wide concern right now.” “Obviously, people are concerned about the declining contracted sales, the tightening on funding, and recently there are also concerns about any hidden debt”.

Arthur Lau, co-head of emerging markets fixed income at PineBridge Investments
“The onshore market is open to a very select group of property developers with government relationships or a very high quality credit standing,” he says. For lower-rated companies, “they need to resort to other means of fundraising”. “The whole scheme of property developers is to rely on refinancing so they can repay [debt] at the same time that they can continue to produce physical property to sell,” says Lau. “If they can’t sell to anyone, they won’t be able to recoup their investment and cash flow will be dead.”

“Risks of a debt restructuring for the most leveraged developers have not faded, but the worst may be over.” “In the short-term, high-yield credit spreads are still likely to remain volatile.”

“We decide, not the issuer, whether the green bond is really green.” “We try to understand whether these countries have a chance to transition toward a more democratic version of their politics. Or whether they are stuck for decades with politics that will never change.”

“We believe that increased transparency and standardisation of reporting from issuers can help investors better identify the best actors.” 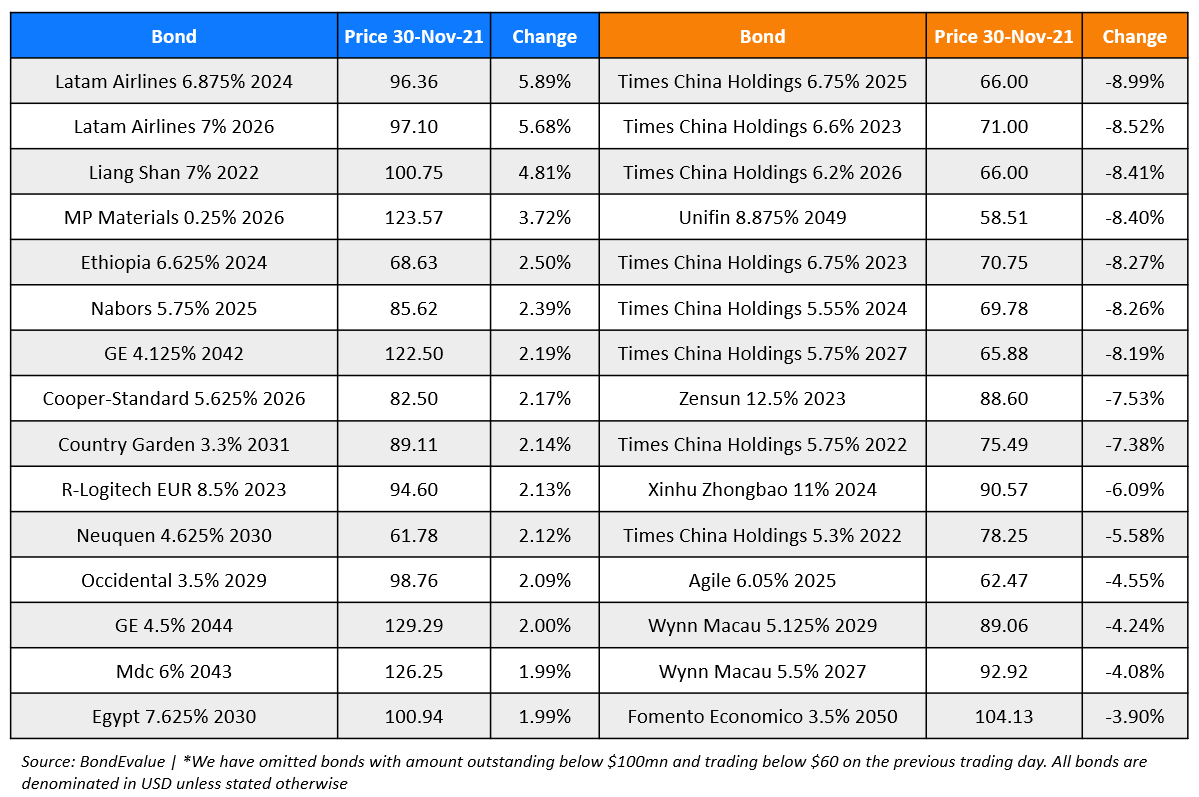