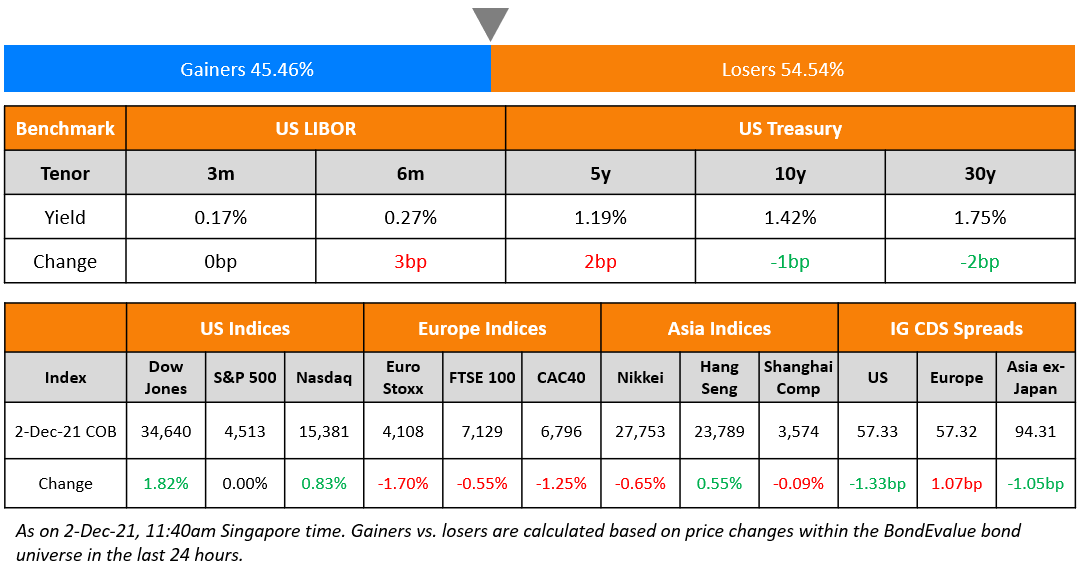 US equity markets recovered yesterday with the S&P and Nasdaq closing 1.4% and 0.8% higher respectively. All sectors were in the green led by Industrials, Energy, Financials and Real Estate, up over 2.7% each. US 10Y Treasury yields moved 1bp lower to 1.42%. The US Treasury curve continues to flatten with the 2s10s at a 11-month low of 80.7bp. European markets were lower with the DAX, CAC and FTSE down 1.4%, 1.3% and 0.6% respectively. Brazil’s Bovespa saw a sharp 3.7% rally. In the Middle East, UAE’s ADX was closed while Saudi TASI was up 0.3%. Asian markets have opened mixed – Shanghai was up 0.6%, and STI was up 0.3% while HSI and Nikkei were down 0.8% and 0.2% respectively. US IG CDS spreads tightened 1.3bp and HY CDS spreads tightened 9.4bp. EU Main CDS spreads were 1.1bp wider and Crossover CDS spreads were 2.7bp wider. Asia ex-Japan CDS spreads tightened 1.05bp.

US jobless claims for the prior week came at 222k, lower than forecasts of 240k. Bloomberg reports that Brazil’s economy has fallen into recession as extreme weather conditions, high interest rates and inflation cut short its recovery from the pandemic. Its GDP fell 0.1% in July-September after posting a revised decline of 0.4% in Q2, thereby two consecutive quarters of negative GDP growth for South America’s largest economy. 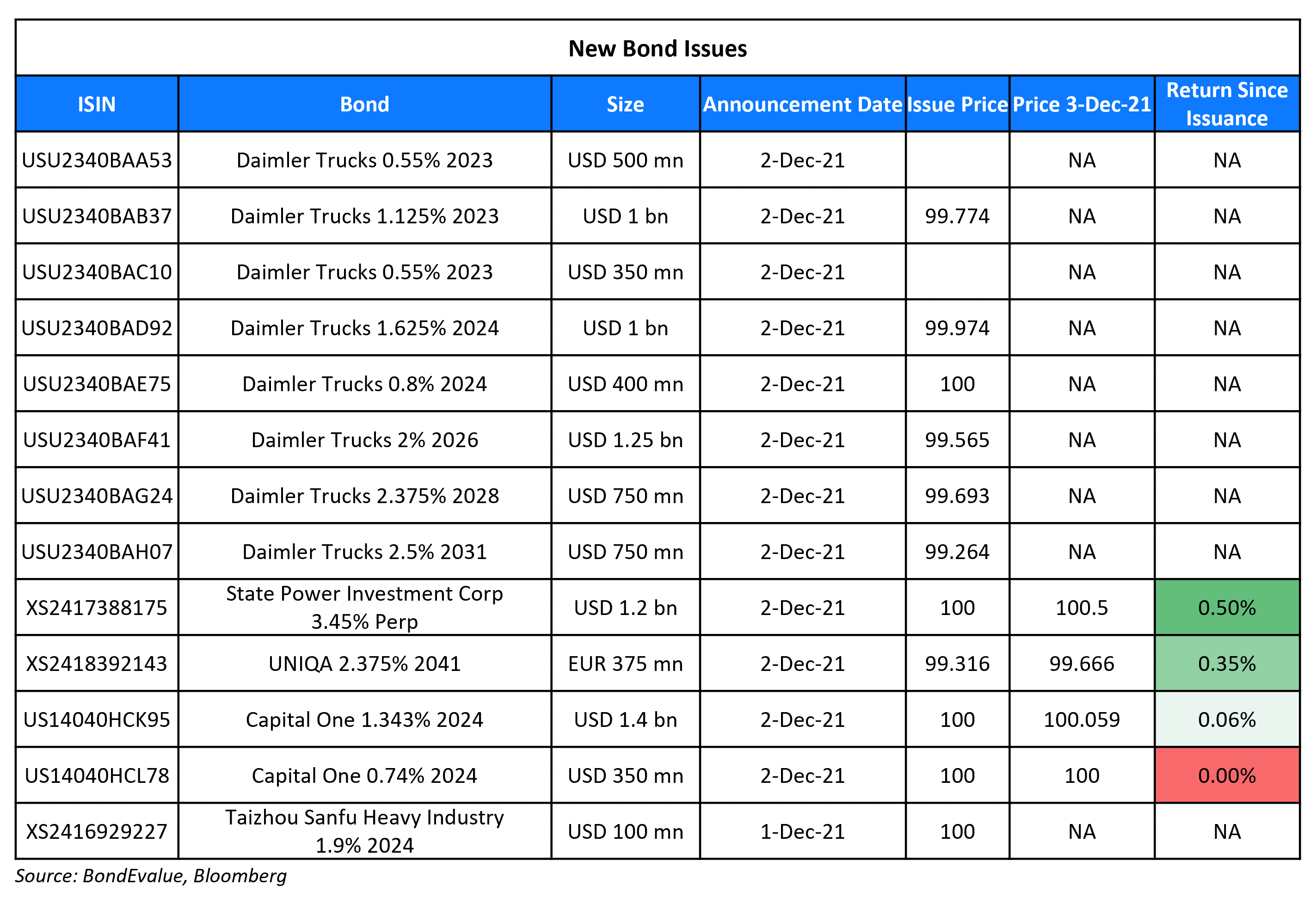 State Power Investment Corp (SPIC) raised $1.3bn via PerpNC3.5 preference shares at a yield of 3.45%, 40bp inside initial guidance of 3.85% area. The bonds have expected ratings of Baa1 (Moody’s), and received orders over $1.7bn, 1.3x issue size. If not called on the first call date, the dividend will step-up by 300bp. The preferreds carry both a dividend stopper and pusher, and a change of control put at 101 before the first call date and at par. SPIC is one of the five largest state-owned electricity producers in China. Asia bought 99% while Europe took 1%. Banks and financial institutions bought 35%, asset managers and fund managers 34%, corporates and insurers 18%, and private banks took the remaining 13%. The new bonds are priced 45bp wider to its existing 3.38% Perps callable in October 2024 that currently yield 3%.

Olympus Corp raised $500mn via a 5Y bond at a yield of 2.143%, 17bp inside initial guidance. The bonds have expected ratings of Baa2/BBB+ (Moody’s/S&P). Proceeds will be used for general corporate purposes. Olympus is a global manufacturer of medical devices such as endoscopy and therapeutic equipment, medical products and microscopes.

“We’ve been very concerned that the Fed has frankly been behind the curve and needed to act more quickly… I don’t think it’s going to be so much of a dramatic event for markets. I think the stock market, the housing market and consumers can handle it… Let’s say labor force participation does not pick up. Then we could have an even bigger issue. Then, instead of the Fed tapping on the breaks, we might see them slam on the breaks. That would cause a lot of volatility. That’s the biggest risk.”

“Big jumps in energy prices normally cause a growth slowdown six months later. Next year was starting to look grim even before this new variant cropped up.”

“Previously, central banks were using Covid concerns to remain dovish. But this time around we’ve reached the point on the inflation front, at least for the Fed, where they’re not going to do that any more.”

“Without the Omicron news this would have been bearish for bonds. It’s been a tough few weeks, but our view remains that we will get through this latest concern around Covid a retest those March highs.”

About 60% of the world’s poorest countries are at high risk or are already in debt distress, double the share in 2015. “low-income countries will find it increasingly difficult to service their debts… We may see economic collapse in some countries unless G-20 creditors agree to accelerate debt restructurings and suspend debt service while the restructurings are being negotiated.” 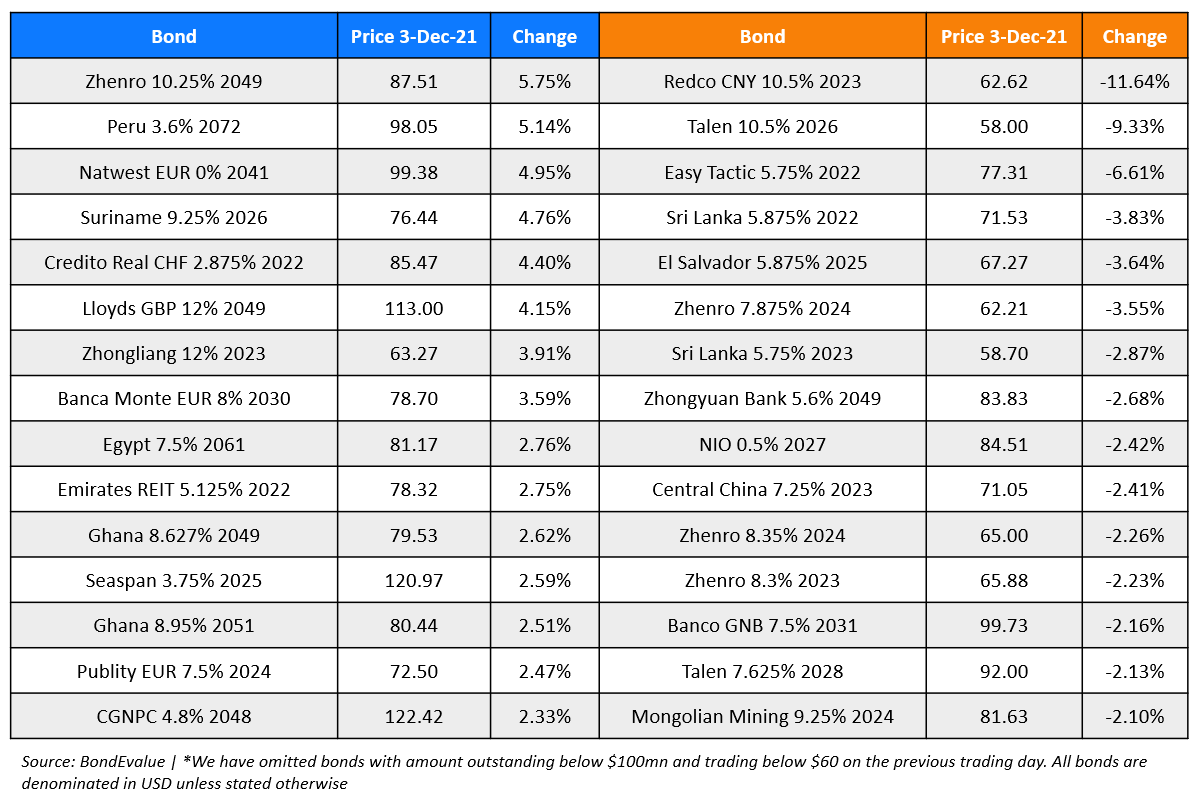