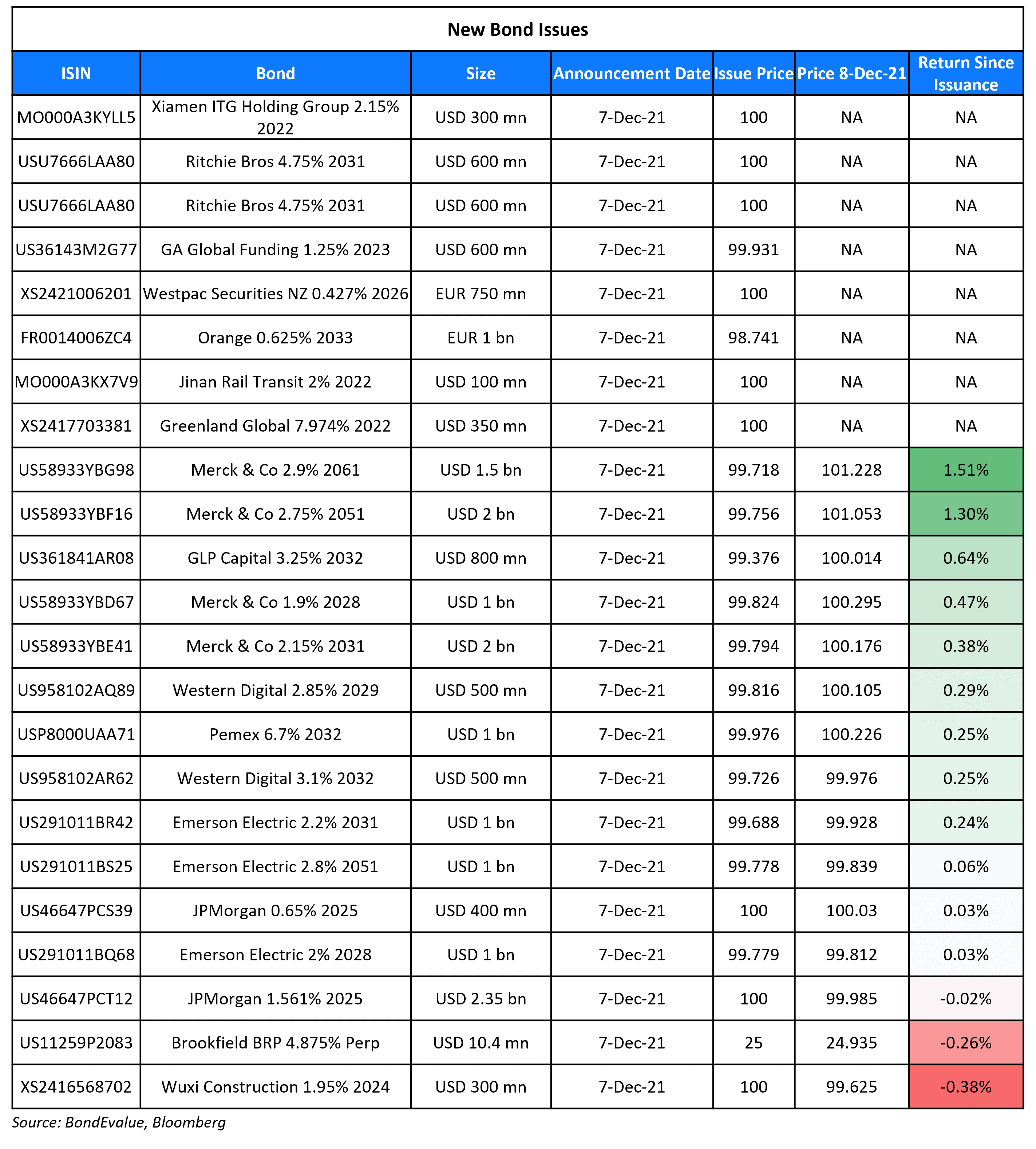 Petroleos Mexicanos (Pemex) raised $1bn via a 10Y bond at a yield of 6.7% vs. initial price guidance of high 6%. The bonds have expected ratings of Ba3/BBB. Proceeds will be used for refinancing of Pemex’s existing indebtedness, including funding the payment of the applicable cash consideration payable to holders whose existing notes are tendered and accepted in the Concurrent Exchange and Tender Offers. The bonds are guaranteed by PEMEX Exploracion y Produccion, Pemex Transformacion Industrial and Pemex Logistica. The new bonds are priced 28bp wider to its existing 5.95% 2031s that yield 6.42%.

JPMorgan raised $2.75bn via a dual tranche deal. It raised:

Both bonds are first callable on 10 December 2024, and if not called, the coupon for the fixed 4NC3 bond will reset to the prevailing SOFR+60.5bp. The bonds have expected ratings of A- (S&P).

Greenland Holding Group is only the third major Chinese developer to tap the offshore bond markets since the Evergrande crisis, raising $350mn via an 8-month bond at a yield of 8% unchanged from final price guidance of 8%. The bonds are unrated. The new bonds were priced significantly inside its existing curve with its 6.75% bonds due June 2022 currently yielding 18.9%. Proceeds will be primarily used for offshore debt refinancing. This comes about a week before its $500mn 6.25% 2022s become puttable at par on December 16, 2021. The bonds are issued by Greenland Global Investment and guaranteed by Greenland Holding Group.

Greenko raised $1bn via a 7NC3 green bond at a yield of 4.3%, 32.5bp inside initial guidance of 4.625% area. The bonds have expected ratings of Ba1/BB (Moody’s/Fitch), and received orders over $2.47bn, 2.5x issue size. Proceeds will be used to repay domestic debt issued by a restricted group of subsidiaries and issue expenses. The bonds are issued by indirect subsidiary Greenko Power II and guaranteed by Greenko Energy.  About 39% of the bonds were allocated to Asian investors, 34% to EMEA and 27% to the US. Fund managers took 89%, insurers, pension funds and sovereign wealth funds 9%, and banks and private banks 2%.

Weifang Binhai Investment Development raised €80mn via a 364-day bond at a yield of 5.1%, 40bp inside initial guidance of 5.5% area. The bonds are unrated. Proceeds will be used for debt repayment and general working capital purposes. The Chinese local government financing vehicle of the Weifang municipal government is mainly responsible for infrastructure construction and municipal development in the Weifang Binhai Economic Development Zone in Shandong province.

Xiamen ITG Holding Group raised $300mn via a 364-day bond at a yield of 2.15%, 35bp inside initial guidance of 2.5% area. The bonds are unrated. The proceeds from the Macau-listed deal will be used for working capital and both onshore and offshore refinancing. The bonds are issued by wholly owned subsidiary ITG Holding Investment (HK) and guaranteed by Xiamen ITG. Xiamen ITG Group is a Chinese company operating in supply chain management, property and financial services.

Wuxi Construction and Development Investment raised $300mn via a 3Y green bond at a yield of 1.95%, 55bp inside initial guidance of 2.5% area. The bonds have expected ratings of BBB+, and received orders over $1.5bn, 5x issue size. Proceeds will be used to refinance group debt in accordance with a green finance framework. The bonds are issued by wholly owned subsidiary Xihui Haiwai I Investment Holdings and guaranteed by Wuxi Construction and Development Investment.

Equity clawback is a feature of a bond that allows the issuer to refinance a certain amount of the outstanding bonds with proceeds from an equity offering. These equity offerings could be either initial or follow-on public offerings. In the case of Del Monte Pacific’s $90mn 3NC2 bond priced yesterday, there was an equity clawback at par plus coupon.

On JPMorgan Sees a December Bounce Back for Emerging-Market Bonds

“Clients already hold high levels of cash. There’s been some derisking already that’s happened in the past few months. So, if anything, I’d be advocating for investors to be reducing their cash exposure and moving into bonds… When you look at emerging-market credit, it’s cheap on so many different levels. It’s cheap versus developed-market credit, it’s cheap versus the fundamental drivers as well.”

The cut in the reserve requirement ratio won’t be enough to save some property developers with ratings of single B and below from default. “We expect more debt restructurings, more exchange offers that we might identify as distressed exchanges because they are less than the original promise”

With debt levels having surged during the pandemic, the increase in borrowing costs is poised to create headwinds for economic growth, and trouble could emerge when short-term rates surpass 1%… Keep an eye on the high-yield bond market, a potential “canary in the coal mine” for risk assets… the historically low level of yields across the curve today makes this flattening a doubly powerful signal of concern… the annual pace of gains in the consumer price index could hit 7% in the next month or two. He ran through numerous inflation measures and pointed out that shelter costs have climbed significantly… Markets could face more volatility now that the Fed has said it might quicken its tapering program.

There remains potential for further volatility into the year-end. Year-end hedges are expensive with one of the largest gaps between VIX and realized volatility.  Implied vs. realized spreads are high in equities and credit.

Nomura recommends buying dollar bonds of high-quality Chinese property companies, saying they will be the first to benefit if policy is eased.  Such developers will “fare better in an industry consolidation” 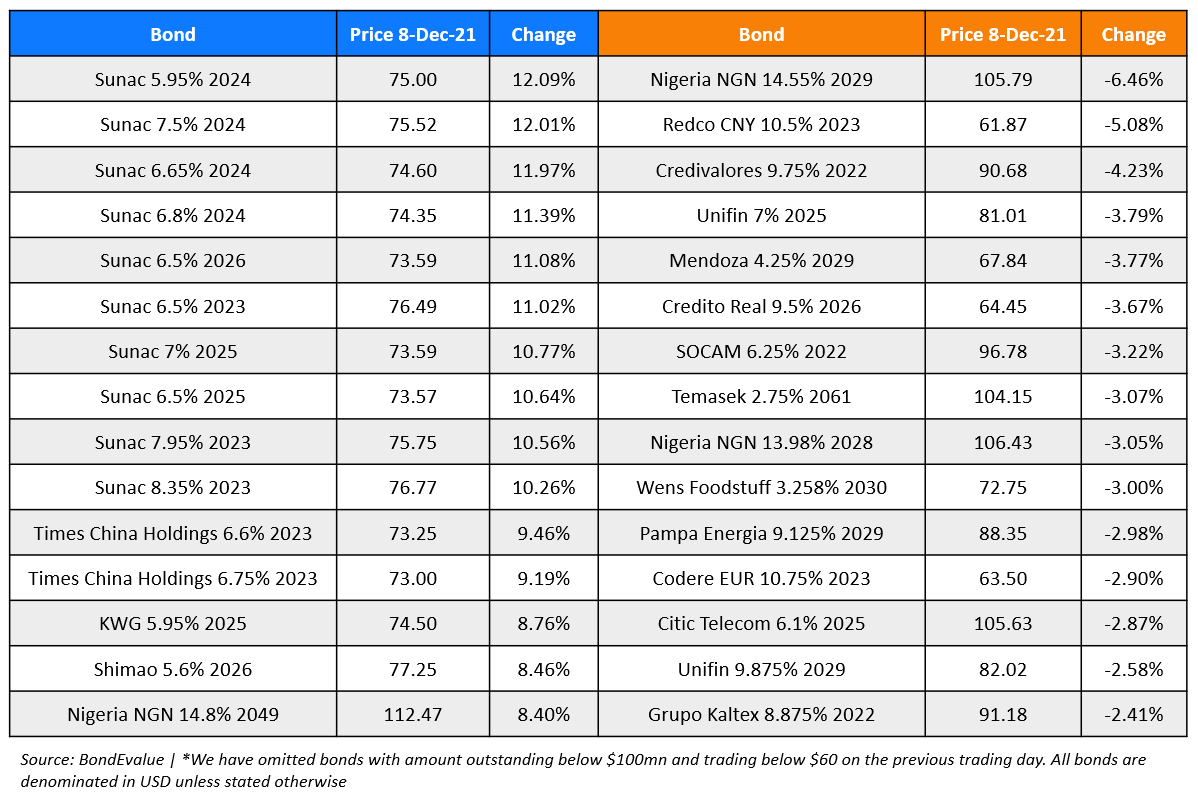