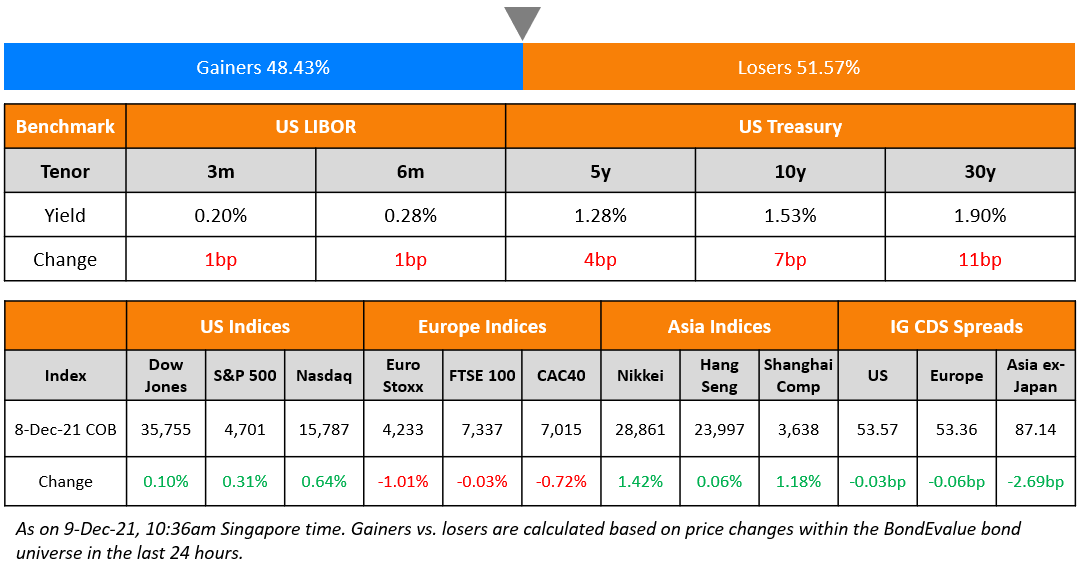 US equity markets continued its upward move with the S&P and Nasdaq closing 0.3% and 0.6% higher. Most sectors were in the green led by Communication Services and Healthcare, up over 0.7% each. US 10Y Treasury yields moved 2bp higher to 1.46%. European markets were broadly lower with the DAX and CAC down 0.8% and 0.7% while FTSE was flat. Brazil’s Bovespa was up 0.5%. In the Middle East, UAE’s ADX was down 0.3% while Saudi TASI was down 1.1%. Asian markets have opened largely higher – Shanghai and HSI were up over 1% each, STI was up 0.3% while Nikkei was down 0.1%. US IG CDS spreads were flat while HY CDS spreads widened 0.8bp. EU Main CDS spreads were 0.1bp tighter and Crossover CDS spreads were 0.5bp wider. Asia ex-Japan CDS spreads tightened 2.9bp. 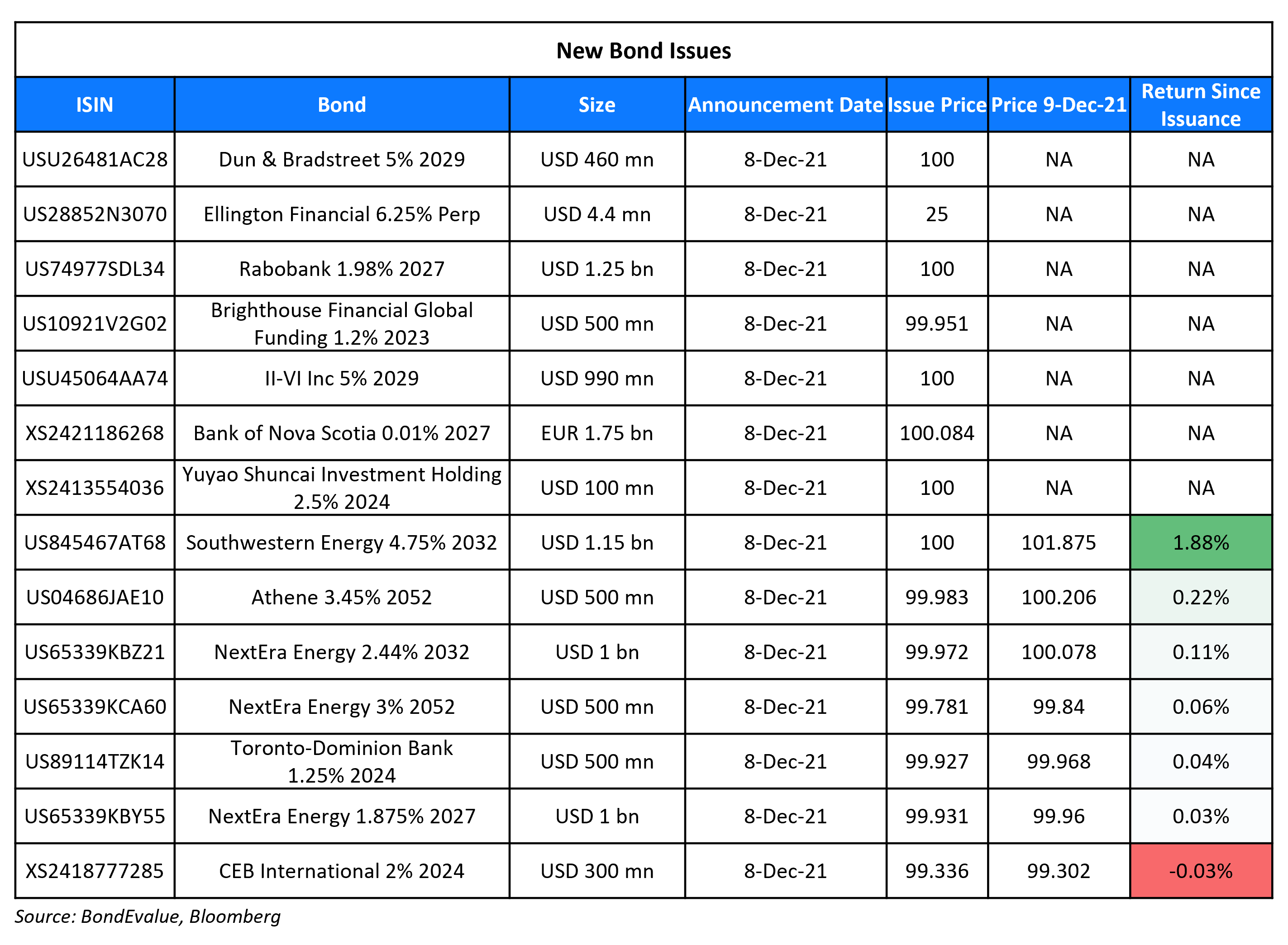 Southwestern Energy raised $1.15bn via a 10NC5 bond at a yield of 4.75%, 25-50bp inside initial guidance of 5-5.25%. The bonds have expected ratings of Ba3/BB (Moody’s/S&P). Proceeds, along with net proceeds associated with its proposed term loan credit agreement, borrowings under its revolving credit agreement and cash on hand will be used to fund the cash portion of its $1.85bn acquisition of GEP Haynesville and its previously announced tender offers and pay a portion of the outstanding balance of its revolving credit. The bonds are first callable on February 1, 2027. Southwestern Energy Company is an independent energy company primarily focused on natural gas and crude oil exploration, development and  production (E&P).

CEB International raised $300mn via a 3Y bond at a yield of 2.23%, 45bp inside initial guidance of T+170bp area. The bonds have expected ratings of BBB (Fitch), and received orders over $2.2bn, 7.3x issue size. Proceeds will be used for the replacement of maturing offshore loans. The bonds are issued by CEBI Splendid, a wholly owned subsidiary of the Hong Kong-based financial services company. CEB International Investment is wholly owned by China Everbright Bank.

An SD rating is assigned by S&P Global Ratings when it believes that the obligor/issuer has selectively defaulted on a specific issue or class of obligations but it will continue to meet its payment obligations on other issues or classes of obligations in a timely manner. A rating on an obligor is also lowered to ‘D’ or ‘SD’ if it is conducting a distressed debt restructuring. China Aoyuan was downgraded to SD from CCC earlier this week.

“The Committee considers that, given the increase in its inflation projections and in the risk of a deanchoring of long-term expectations, it is appropriate to advance the process of monetary tightening significantly into the restrictive territory.

“The repayments (for 2022) will go through seamlessly, we are confident we’ll be making those payments on time. There is absolutely no worry about that… At the same time we are taking many steps to deal with our debt in a sustainable manner and not just depend on a single instrument, we are developing several new instruments, several new inflows, which will hold us in better stead over the longer term, and that’s the whole plan we have initiated.”

Sara Grut, a strategist at Goldman Sachs Group in London.

“If tighter developed-market policy comes alongside slowing global growth and weaker risk sentiment, then we would expect overall emerging-market issuance to decline, and vice versa”

“We expect strong support from crossover investors into EM debt due to a shortage of U.S. and EUR bonds in the corporate markets”

JPMorgan expects Asian ESG dollar bond issuance of between $90 billion and $100 billion in 2022.

“Greater attention on the ESG strategy of issuers, be it at the board or investor level on greater disclosure requirements, has meant that now more than ever we’re having conversations with clients about having CBs with an ESG focus”

“We’ve recognized a trend that there are more and more $1 billion-plus transactions. Larger deals attract more investors, and certainly there will be a portion of those deals that will be ESG-related.”

On JPMorgan Seeing Investment-Banking Fees Up 35% in Fourth Quarter

Pipeline “looks quite strong into next year across M&A, debt and equity. How is it going to play out? Difficult to know, because I think it will be very linked to the path of interest rates. So we have a smooth path of normalization of interest rates, most likely that pipeline will be executed and probably we’ll have a good year in banking. If there is a very volatile and very disruptive increase in interest rates, probably a couple of markets will suffer and it will be more difficult…. Probably we’re going to see some normalization next year across fixed income and equities.” 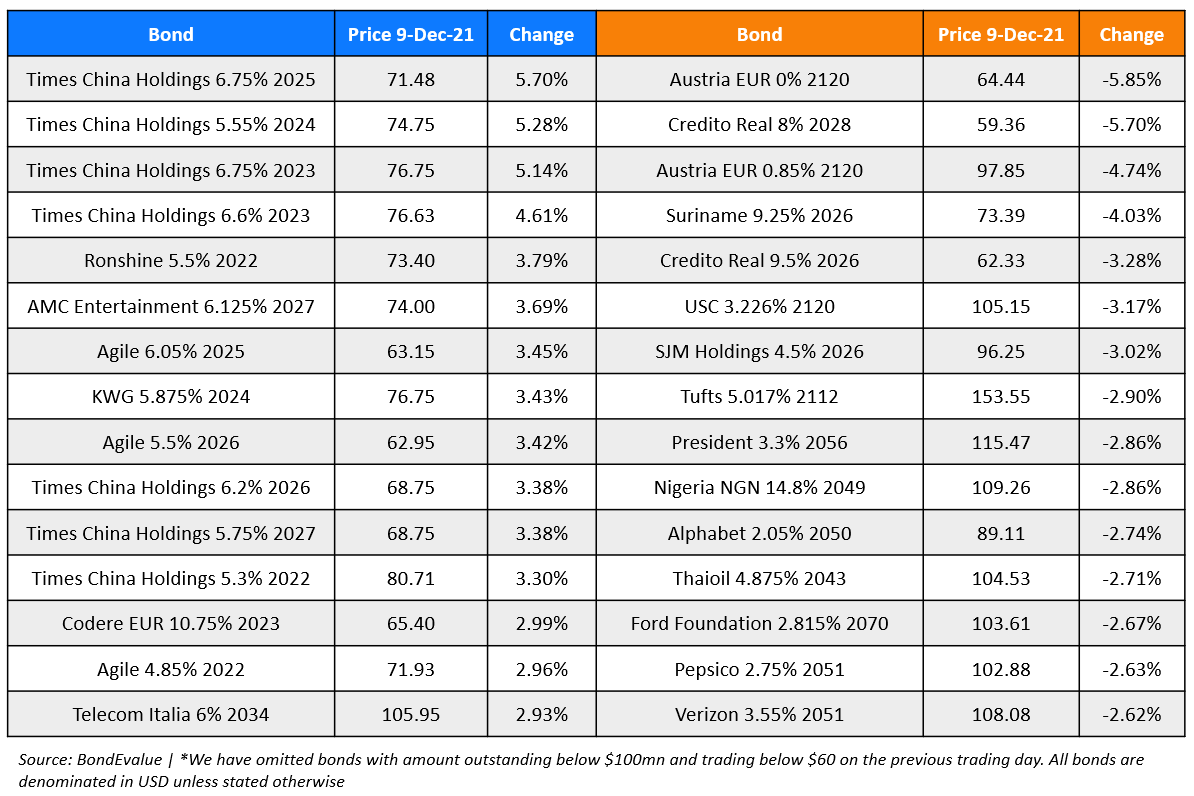