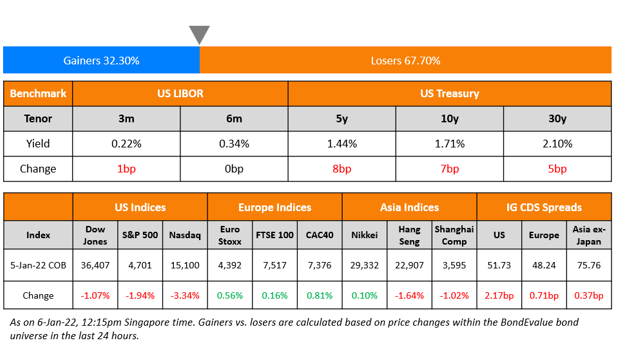 US equity markets ended sharply lower, with the S&P and Nasdaq down 1.9% and 3.3% respectively. All sectors were in the red with Real Estate, IT and Communication Services down ~3% each. US 10Y Treasury yields continued to rise, by 7bp to 1.71%. The sharp moves in US equities and Treasuries come after the December’s FOMC minutes showed that the Fed may need to raise interest rates “sooner or at a faster pace” than officials had initially anticipated.  European markets were higher with the DAX, CAC and FTSE up 0.7%, 0.8% and 0.2% respectively. Brazil’s Bovespa was down 2.4%. In the Middle East, UAE’s ADX was flat while Saudi TASI was up 0.9%. Asian markets have opened broadly lower today – Shanghai, HSI and Nikkei were down 0.2%, 0.4% and 2.2% respectively while STI was up 0.6%. US IG CDS spreads widened 2.2bp and HY CDS spreads widened 10bp. EU Main CDS spreads were 0.7bp wider and Crossover CDS spreads were 3.2bp wider. Asia ex-Japan CDS spreads widened 0.4bp.

Reliance raised $4bn via a three-tranche deal. It raised:

The bonds have expected ratings of Baa2/BBB+ (Moody’s/S&P). Proceeds will be used primarily to refinance borrowings, including its $1.15bn 5.4% 2022s, and for capital expenditure and general corporate purposes. 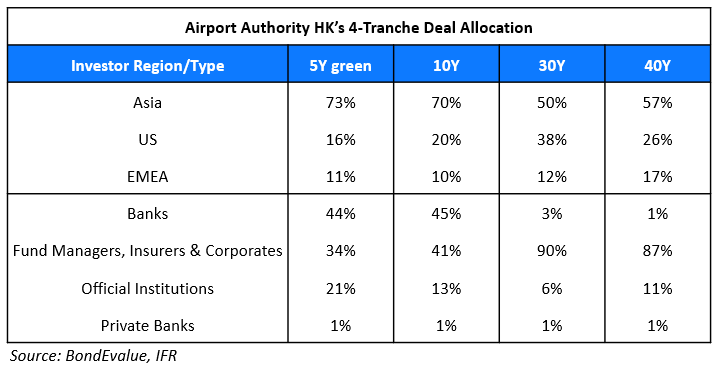 The bonds have expected ratings of AA+ (S&P), and received combined orders over $11.5bn, 2.875x issue size. Proceeds from the 5Y green tranche will be used to finance or re-finance eligible green projects under the issuer’s sustainable finance framework. Proceeds from the other three tranches will be used to fund the issuer’s capital expenditure, including the Three-Runway System project, and for general corporate purposes.

Standard Chartered raised $2bn via a two-tranche deal. It raised:

Commerzbank raised €1bn via a 10Y bond at a yield of 0.315%, 5bp inside initial guidance of MS+4bp area. The bonds have expected ratings of Aaa (Moody’s). 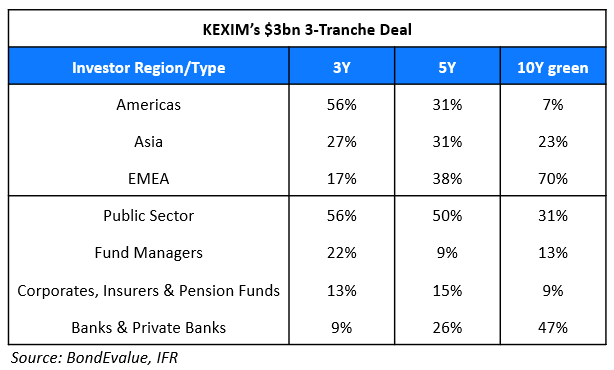 The bonds have expected ratings of Ba2/BB+/BB+. Proceeds will be used for general corporate purposes. The new 3Y bonds are priced 11bp tighter to its existing 4.134% bonds due Aug 2025 that yield 2.41%.

Credit Agricole raised €1.75bn via a two-tranche deal. It raised:

The bonds have expected ratings of Aa3/A+/A+, and received combined orders over €2.7bn, 1.54x issue size.

Jingjiang Port raised $50mn via a 3Y bond at a yield of 1.95%. The bonds are unrated. Proceeds will be used for construction projects, working capital and general corporate purposes. The bonds are supported by a letter of credit from Bank of Nanjing Taizhou branch.

Kangaroo bonds are bonds issued in Australia by non-Australian issuers denominated in Australian Dollars. These bonds give foreign issuers access to another country’s capital markets and helps them diversify their capital base and could reduce borrowing costs. Although, the currency risk is borne by the issuer. The European Investment Bank (EIB) recently raised A$1.5bn via a sustainability Kangaroo bond.

“These minutes are very hawkish, and it shows an FOMC that wants to lean against the market big time.” “The bond market still views policy tightening being primarily conducted through the front end.”

“It needs to be clear to watchers of the Fed that it’s a matter of when, not if, balance sheet reduction takes place.”

“There are few places to seek cover on days like these but fortunately, we expect bond yields to drift higher but at a more gradual pace.” “Higher yields will naturally pose a challenge to longer-duration equities like technology stocks, so sector positioning will be important going forward.”

“High-yield issuance has been a little slow out of the gate but December was a strong month for performance and inflows and I expect issuers will come with supply to meet healthy demand.” “Issuers should take advantage of still very attractive rates while investors benefit from high-yield fundamentals that are about as good as they get.”

“Looking into 2022, continued cooling will continue well into the first half, while a partial warming up can be expected in the second half, when more supportive policies arrive on the ground.” 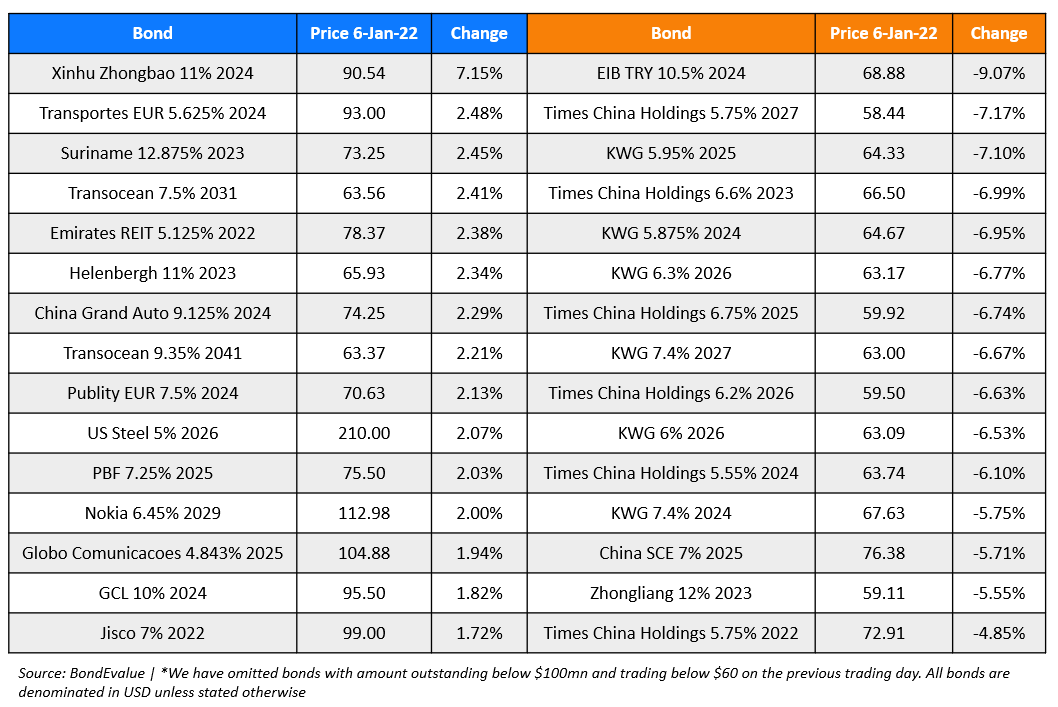