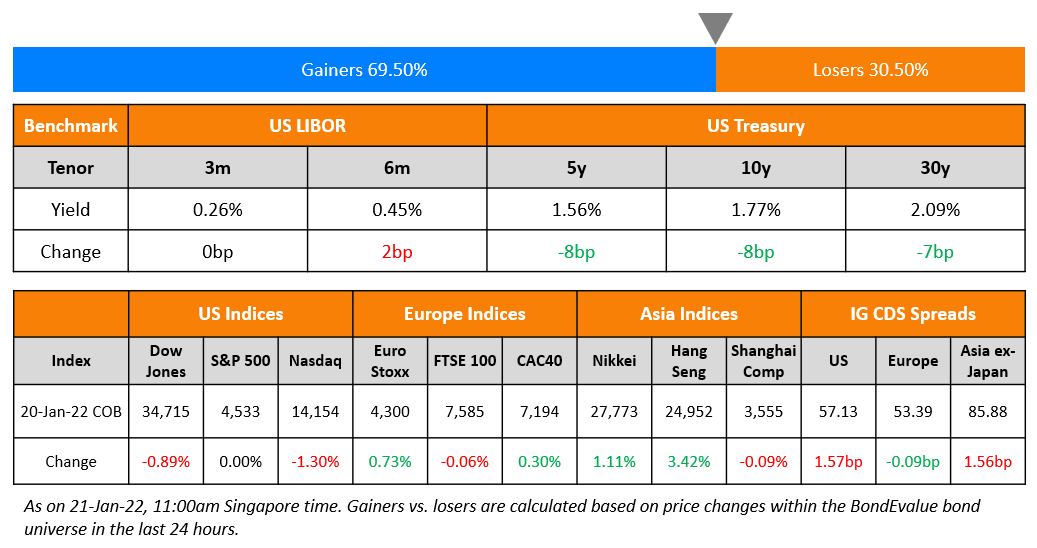 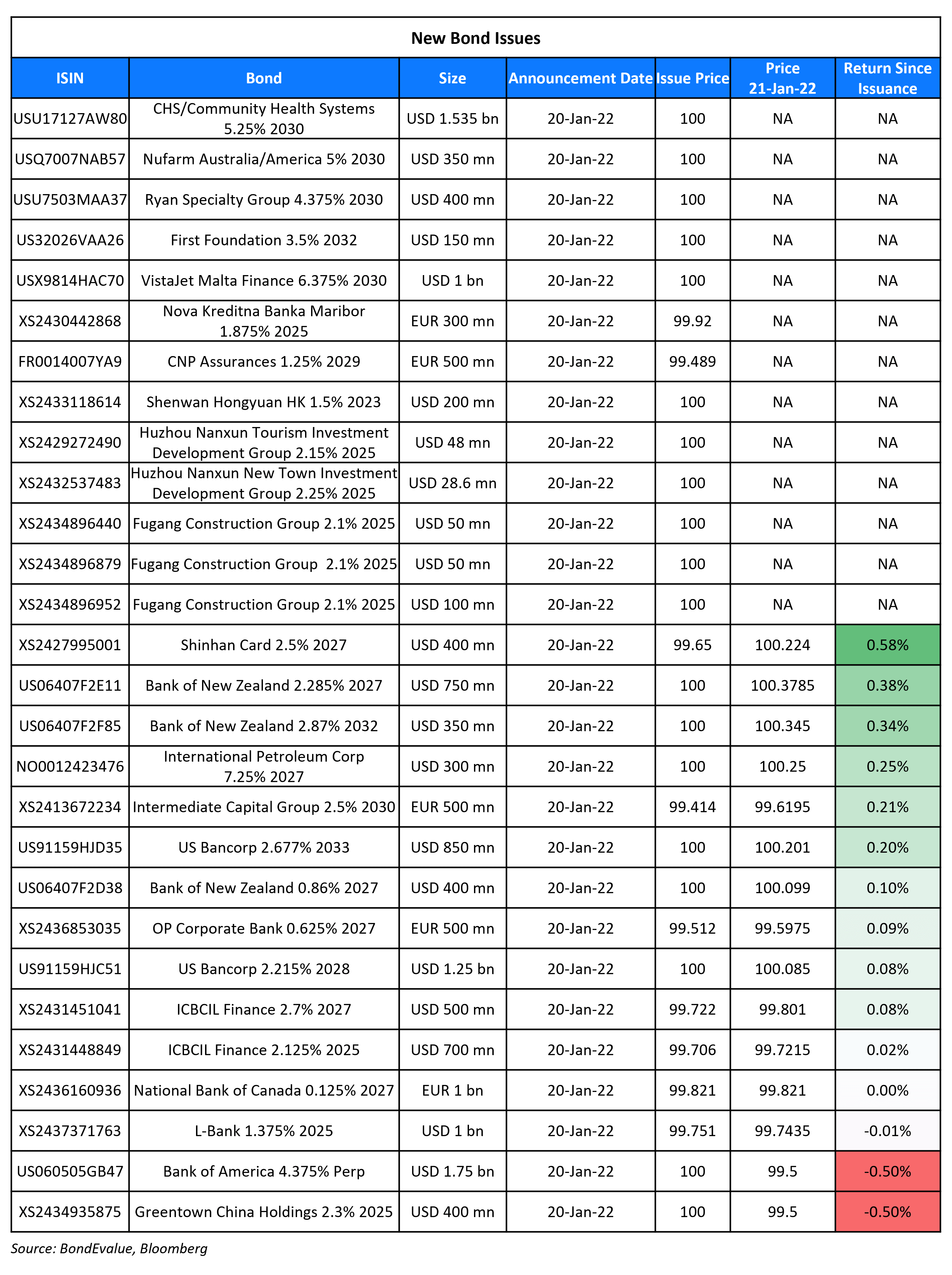 Shinhan Card raised $400mn via a 5Y social bond at a yield of 2.575%, 30bp inside initial guidance of T+125bp area. The bonds have expected ratings of A2 (Moody’s), and received orders over $1.6bn, 4x issue size. Proceeds will be allocated to finance and/or refinance new and/or existing eligible social financing.  Asset and fund managers took 65%, insurers 20% and banks and private banks 15%. Asian investors received 96% and EMEA the remaining 4%. The new bonds are priced 32.5bp wider to its existing 1.375% social formosa 2026s that yield 2.25%.

Bank of New Zealand (BNZ) raised $1.5bn via a three-tranche deal. It raised:
The bonds have expected ratings of A1/AA-/A+.

Greentown China raised $400mn via a 3Y green SBLC (Term of the Day, explained below) backed bond at a yield of 2.3%, 10bp inside initial guidance of 2.4% area. The bonds have expected ratings of BBB– (S&P). Proceeds will be used for debt refinancing in accordance with the issuer’s green financing framework. The bonds are supported by a letter of credit from China Zheshang Bank Hangzhou branch.

Shenwan Hongyuan HK raised $200mn via a 364-day bond at a yield of 1.5%, 40bp inside initial guidance of 1.9% area. The bonds are unrated. Proceeds will primarily be used for general corporate purposes.

The bonds are unrated. The proceeds will be used for project construction and liquidity replenishment.

On the expectation that inflation will fall close to 2% by end of the year – Janet Yellen, US Treasury Secretary

“I expect inflation throughout much of the year — 12-month changes — to remain above 2%.”

“But if we’re successful in controlling the pandemic I expect inflation to diminish over the course of the year and hopefully to revert to normal levels by the end of the year, around 2%.” “Households are in good financial shape — in many ways have come out of this even stronger than they were pre-pandemic,” she said. “There’s a buffer stock of savings that accumulated that I think will continue to support the economy in the years ahead, even with less fiscal support.”

“The cycle of economic recovery in the US is ahead of that in Europe,” Lagarde said. “So we have every reason not to act as quickly or as ruthlessly as one might imagine with the Fed.”

According to the minutes of the European Central Bank meeting minutes

“Some members retained reservations about some elements of the proposed package such that they could not support the overall package.” ECB should “retain the ability to calibrate and recalibrate the monetary policy stance in a data-driven manner in either direction”.

In an article by German economists Jürgen Stark, Thomas Mayer and Gunther Schnabl

“It is becoming increasingly clear that inflation will gain momentum without monetary policy countermeasures”. “Such tightening would create serious problems for highly indebted eurozone members.”

“As we reach some of the inflection points in the market cycle, the IG corporate bond market will be hit first.”

“As well as offering diversification, these can improve the convexity of our portfolios through their defensive qualities.”

“Yields are going to go a little bit higher before things start to stabilize.” “For retail investors right now, it’s hard to see those total return losses and kind of stick with the trades.”

“We see turbulence in spreads as higher rates inflict pain in general risk sentiment through the equity market like a repeat of end-2018.”

“Now with the selloff that we have seen and the improvement in the outlook we are coming closer to a fair area with what the market is pricing in terms of hikes by central banks.” “It’s not like a bang the table, right here right now, but certainly coming into a zone where fixed income is becoming more attractive.” “The pendulum has swung from no hike as far as the eye can see to the situation now where the market is probably going over its skis when it comes to thinking that it needs so much hiking and the situation is out of control.” 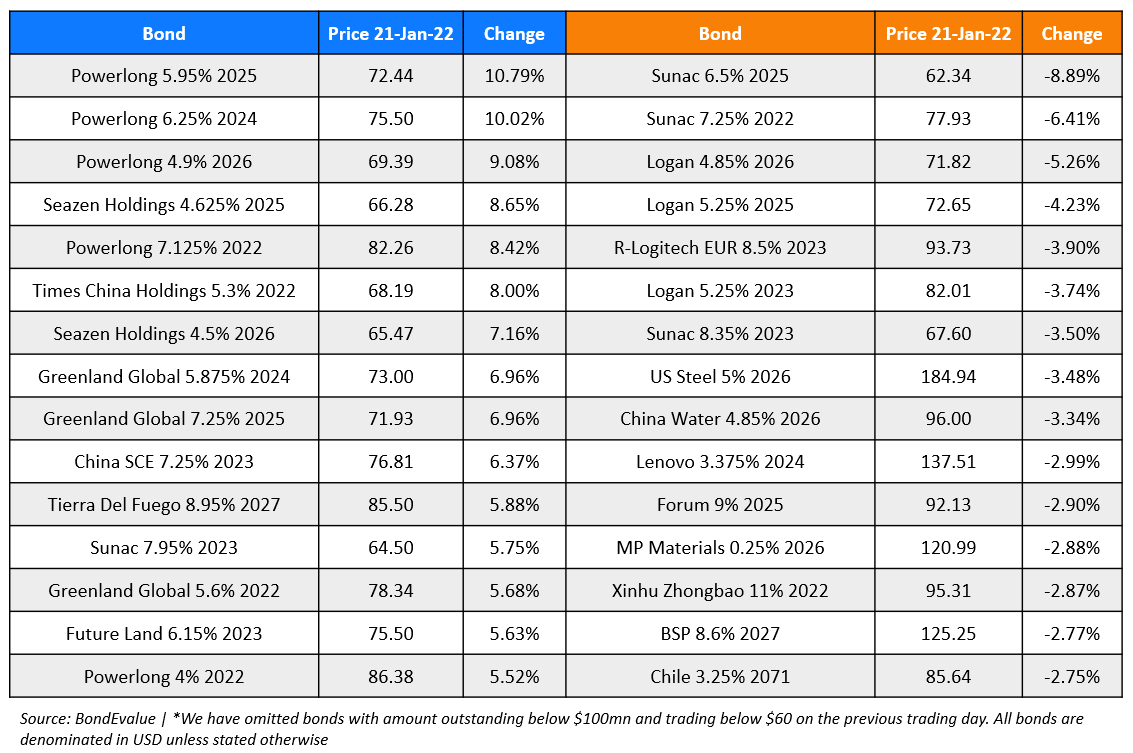