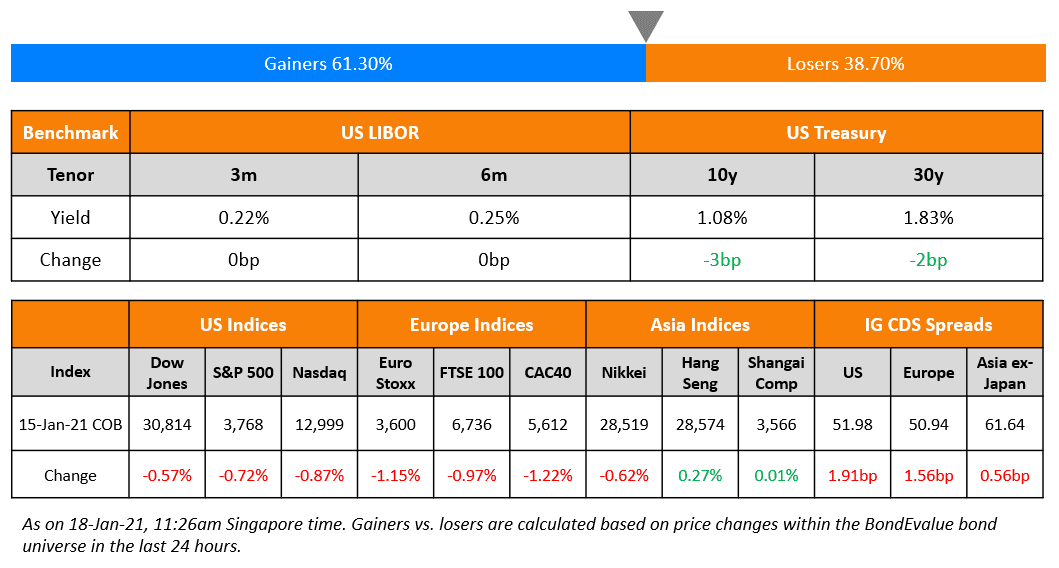 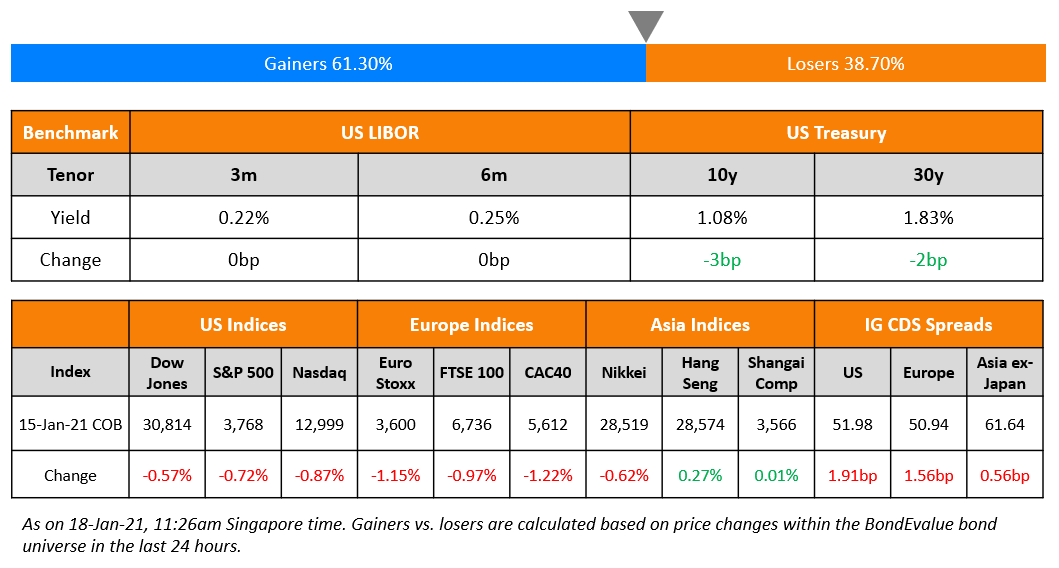 US equities ended lower last Friday as the S&P and Nasdaq were down 0.7% and 0.9% respectively. US 10Y Treasury yields moved 4bp lower with US headline and core retail sales for December falling 0.7% and 1.4% as consumer spending slowed down. US banks also kickstarted their earnings with mixed results. FTSE, DAX and CAC fell 1%, 1.4%, 1.2% with prospects of more lockdowns and slower vaccine rollouts as Pfizer cut back deliveries to the EU at short notice. US IG CDS spreads were 1.9bp wider and HY was 8.3bp wider. EU main and crossover CDS spreads also widened 1.6bp and 7.5bp respectively. Asia ex-Japan CDS spreads widened 0.6bp and Asian equities have opened mixed today with China and Hong Kong and Indonesia slightly higher and other indices lower.

Bond Traders’ Masterclass – A Practical Introduction To Bonds
1 Day To Go
BondEvalue is conducting a Bond Traders’ Masterclass across five sessions specially curated for private bond investors and wealth managers to develop a strong fundamental understanding of bonds. The sessions will be conducted by debt capital market bankers who have previously worked at premier global banks such as Credit Suisse, Citi and Standard Chartered. Click on the image below to register. 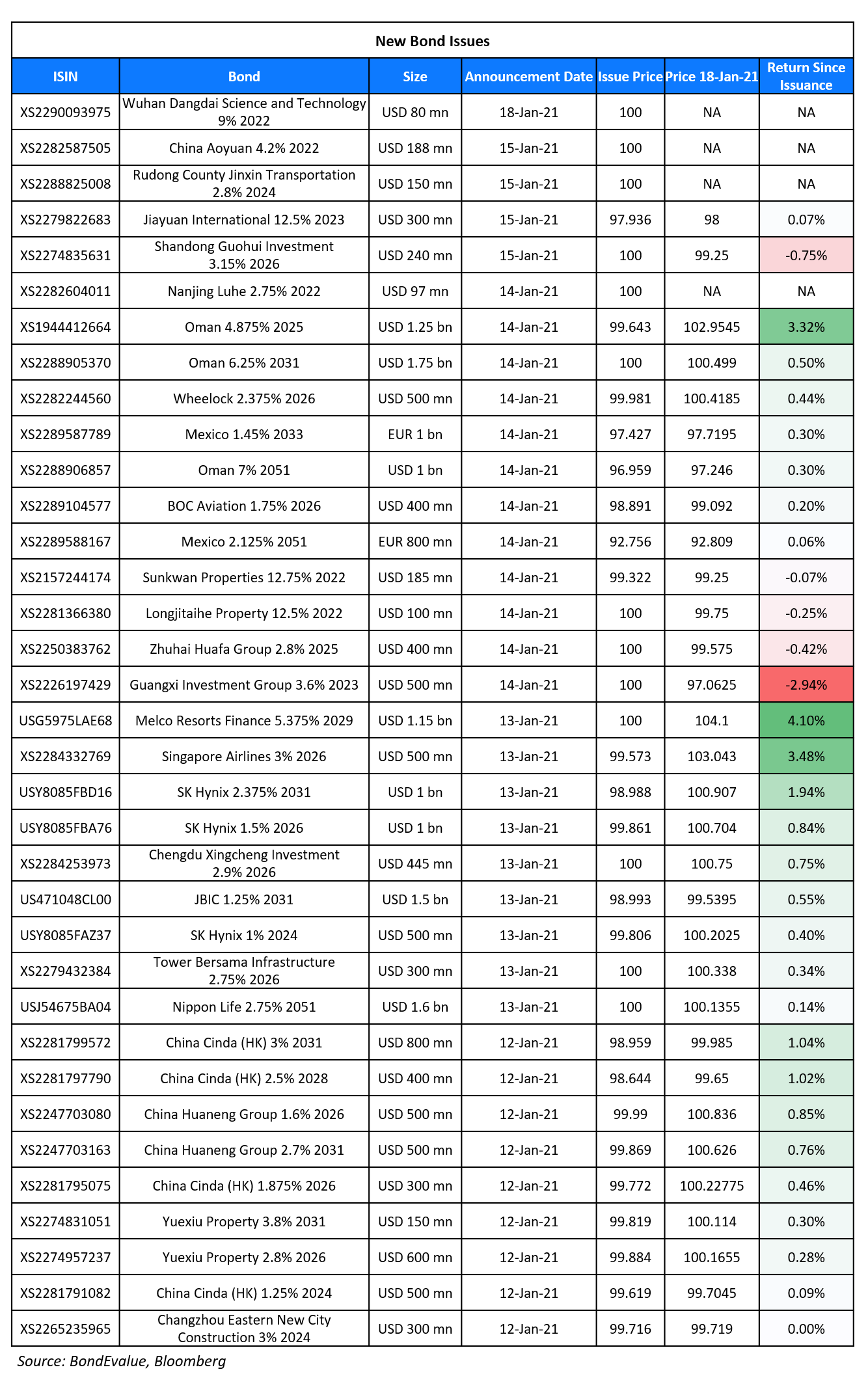 Shandong Guohui raised $240mn via a 5Y bond at a yield of 3.15%, 35bp inside initial guidance of 3.5% area. The bonds have expected ratings of BBB+, and received orders over $900mn, 3.75x issue size. Proceeds will be used for domestic and overseas business development. Shandong Guohui has a strategic role in the reform and restructuring of SOEs in the Shandong province. It owns equity in SOEs involved in transportation, engineering, and financial and operating leasing. The bonds were priced at a new issue premium of 12bp over their 3.15% 2025s that currently yield 3.03%.

Rudong County Jinxin Transportation raised $150mn via a 3Y credit enhanced bond at 2.8%, 30bp inside initial guidance of 3.1% area. The bonds were unrated and have an irrevocable standby letter of credit from Bank of Jiangsu Nantong branch. Proceeds will be used for debt refinancing and working capital purposes. The issuer is a local government financing vehicle of Rudong County, Nantong in China’s Jiangsu province focusing on infrastructure construction and land development.

Wuhan Dangdai Science & Tech raised $80mn via a 364-day note at a yield of 9%, a strong 75bp inside initial guidance of 9.75% area. The bonds were unrated and final books were not available. Dangdai International Investments is the issuer and the bonds have a guarantee by Wuhan Dangdai Science and Technology. The company has businesses covering medicine and medical services, property development, tourism, film, television and sport. 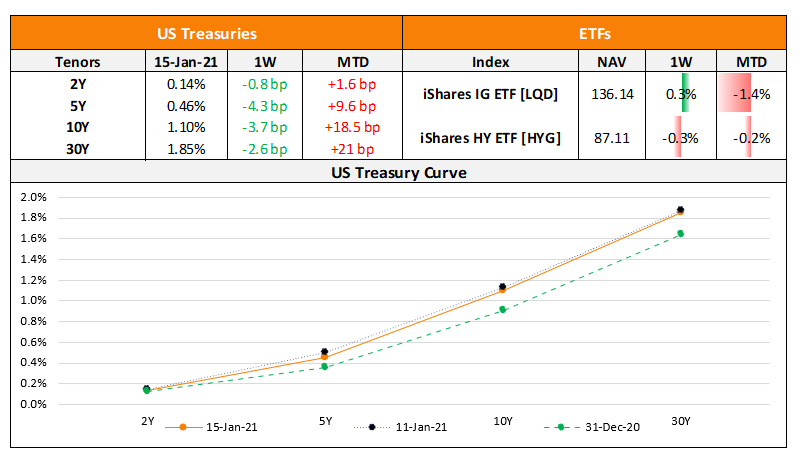 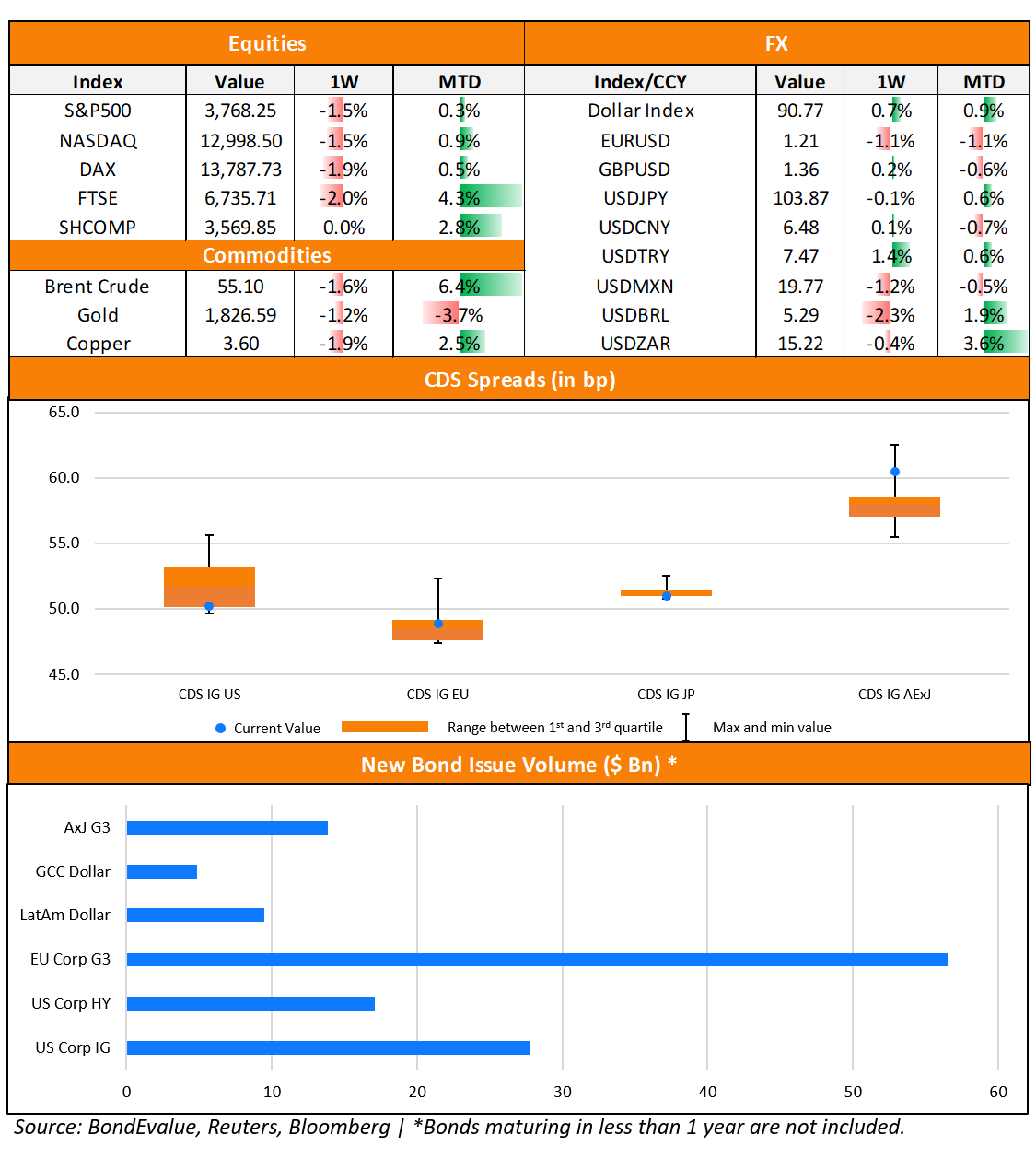 The Sherman Ratio is a financial ratio that quantifies the breakeven point of how much return investors can expect per unit of risk, akin to the Sharpe ratio. The Sherman Ratio is calculated as the yield on a bond divided by its duration, thereby measuring the yield per unit of duration taken. The resulting value tells you how much yields need to rise by for investors to lose the initial yield offered during the purchase of the bond. For example, if a bond has a yield of 2% and its duration is 5 years, then a 40bp rise in yields would wipe-out the 2% returns that the bond offers. The lower the Sherman Ratio, the less interest rates need to rise to offset the bond’s yield.

Recently, Bloomberg reported a story that talks about investors getting very low compensation relative to interest-rate risk. The ratio was made and is named after Jeff Sherman, a portfolio manager at Doubleline Capital.

On the ECB’s threat to banks with capital ‘add-ons’ over leveraged loan risks – in a statement by the ECB
“Where banks incur risks in leveraged lending that are not adequately addressed by appropriate risk management practices, ECB banking supervision is considering supervisory actions and measures, including qualitative or quantitative requirements as well as capital add-ons,” the ECB said in a statement.

On the global wall of cash primed to snap up US Treasuries
Mark Dowding, chief investment officer at BlueBay Asset Management
“The trajectory on the virus is creating downside risks for economic data,” said Dowding. “Over the next few months, the 10-year yield should range between about 1% and 1.25%.”

James Athey, money manager at Aberdeen Standard Investments
“The risks around the economic outlook are huge,” said Athey. “There are risks in both directions, but I’d argue the preponderance are to the downside — toward less positive growth outcomes, less positive virus outcomes, less positive vaccine outcomes. If 10-year yields get to 1.25% to 1.30%, I’d be comfortable adding to my long-duration positions.”

Takenobu Nakashima, chief rates strategist at Nomura Securities
“There won’t be much of an outflow from Japan until Treasury yields stop rising,” said Nakashima.

Masahiko Loo, fixed-income portfolio manager at AllianceBernstein Japan
“Japanese investors tend to buy big after confirming yields have peaked out — they aren’t momentum riders,” said Loo. “There won’t be a major outbound shift until 10-year yields rise to 1.3%, as current levels would return just about 80 basis points after hedges, and buying at these levels likely is just confined to short-covering.”

John Taylor, London-based money manager at AllianceBernstein
“There is a significant yield advantage to be had in U.S. Treasuries versus these other markets,” said Taylor. “The cost to hedge the currency is minimal — all central banks are effectively at zero — so global flows will likely move into the U.S. market if the yield gap widens further.”

On European investors betting on central banks to keep bond party going – Jan von Gerich, chief strategist at Nordea Bank Abp
“While the ECB stands ready to do more, the hawks are putting limits to what the central bank can agree on,” said von Gerich. “Such a stance also leaves some room for yields and spreads to increase.”

On US banks’ trading bonanza that is keeping Wall Street booming
Gerard Cassidy, analyst at RBC
“It was definitely better than expected,” said Cassidy. “The fourth quarter is the weaker quarter [seasonally] . . . the numbers were very strong.” “When they put up blockbuster years like 2020, it’s hard to grow those other businesses meaningfully enough to diversify the revenue,” said Mr Cassidy.

Mike Mayo, analyst at Wells Fargo
“There’s a decent chance that Goldman will be best in class for the fourth quarter and the standout performer,” he added.

Mark Mason, Citi’s chief financial officer
“We’ve had an extraordinary year,” said Mason. “The industry has seen a great deal of wallet growth in markets, and that’s got to normalise at some point.”

On the advice that investors should boost commodity positions and cut bonds – according to Marko Kolanovic, Nikolaos Panigirtzoglou and John Normand, strategists at JPMorgan Chase & Co..
“We increase our overweight in commodities, in particular energy, both as an inflation hedge and to position for a continued cyclical recovery,” the strategists wrote. The changes are “funded by a decreased overweight in credit where spreads are already testing our strategists’ year-end targets.” “We continue to tilt the portfolio toward cyclical and value assets,” the strategists wrote. These“should continue to outperform as the vaccine rollout spurs a broader reopening of the economy and additional stimulus supports the recovery.”

On yields likely to stay low in 2021
Jeff MacDonald, head of fixed-income strategies at Fiduciary Trust
“We don’t expect a whole lot of movement in that part of the yield curve,” he says. “A positively sloped yield curve generally suggests that the market believes that GDP growth is ahead,” he says. “It’s a good indication for future growth and inflation.”

Jeffrey Buchbinder, equity strategist for LPL Financial
“However, we have a bias toward the lower end of this target as accommodative Federal Reserve policy and foreign buyers drawn to the relatively higher U.S. rates may keep a limit on potential yield increases,” he says. “We would still prefer high-quality bonds to make up the bulk of any bond portfolio,” he says. “Should any material risks to the economic recovery present themselves, these credit-sensitive sectors would be more vulnerable.”

Bryce Doty, senior portfolio manager at Sit Investment Associates
“We are expecting vaccine news as a steady wind at our back that will eventually lead to a tremendous rebound in economic activity in 2021, and you don’t want to be on the wrong side of that trade,” Doty says. 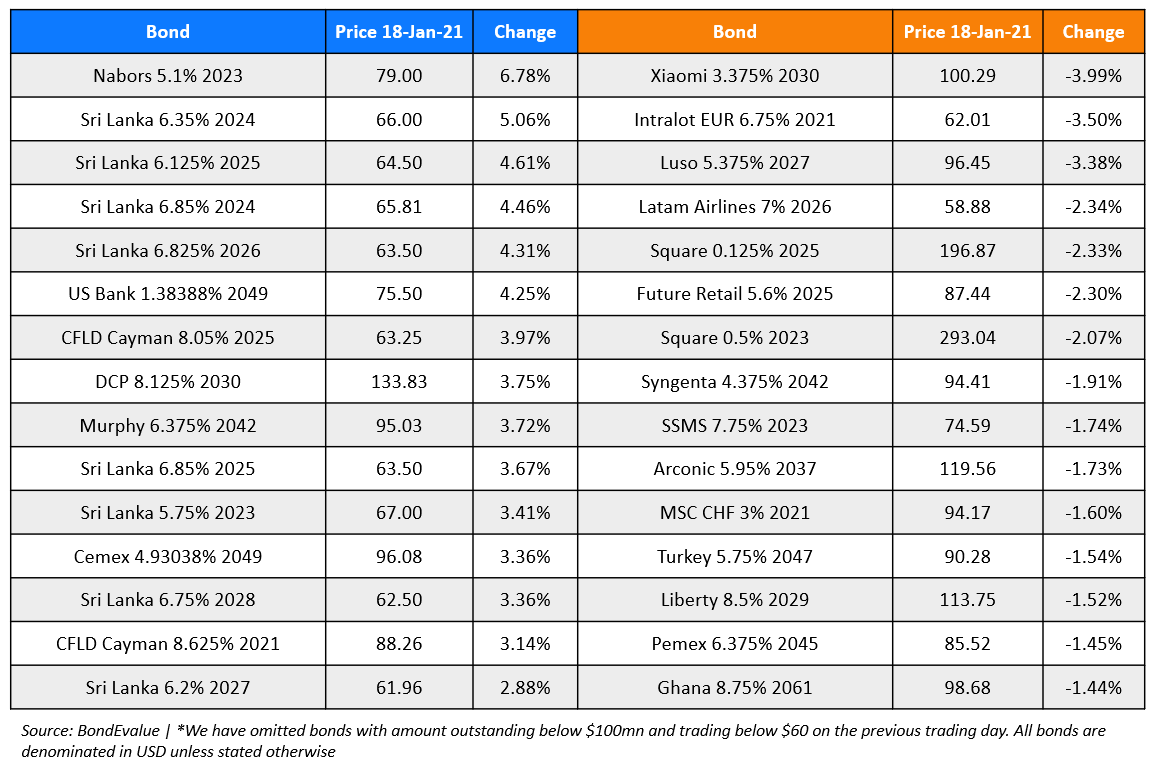