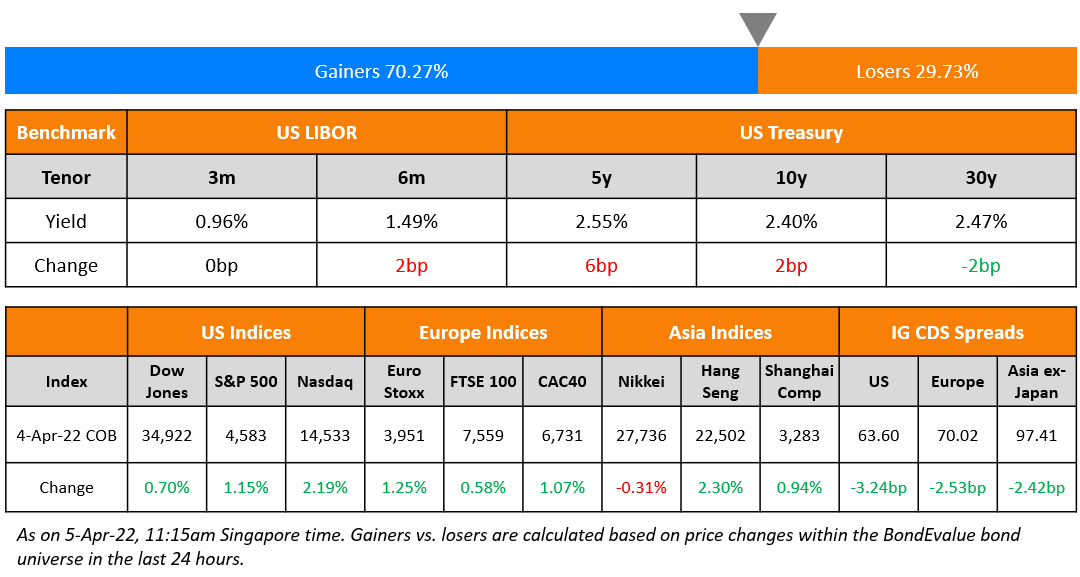 Happening Today | Masterclass on How to Analyze CoCo/AT1 Perpetual Bonds

Sign up for today’s masterclass on ESG/Sustainable bonds that will cover Key Definitions, Growth of the ESG Bond Market, Types of ESG Bonds, ESG Bond Standards, External Reviews, Deep dive on ESG Bond Examples, Greenium and Greenwashing. The session will begin 5pm Singapore / 1pm Dubai / 9am London. Click on the banner below to register. 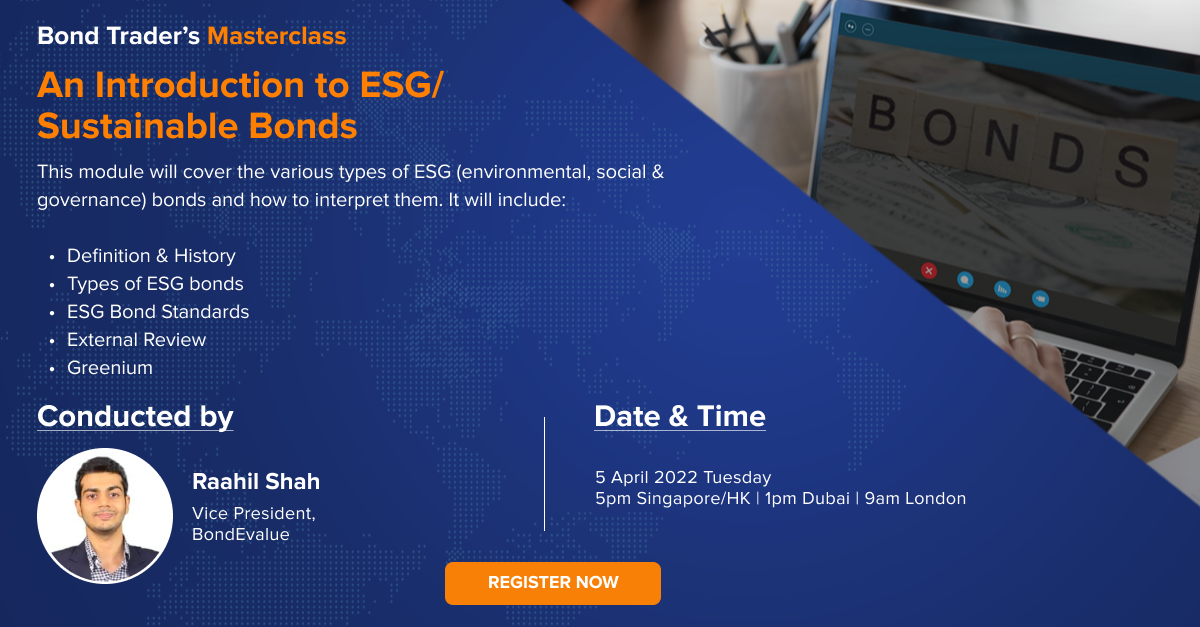 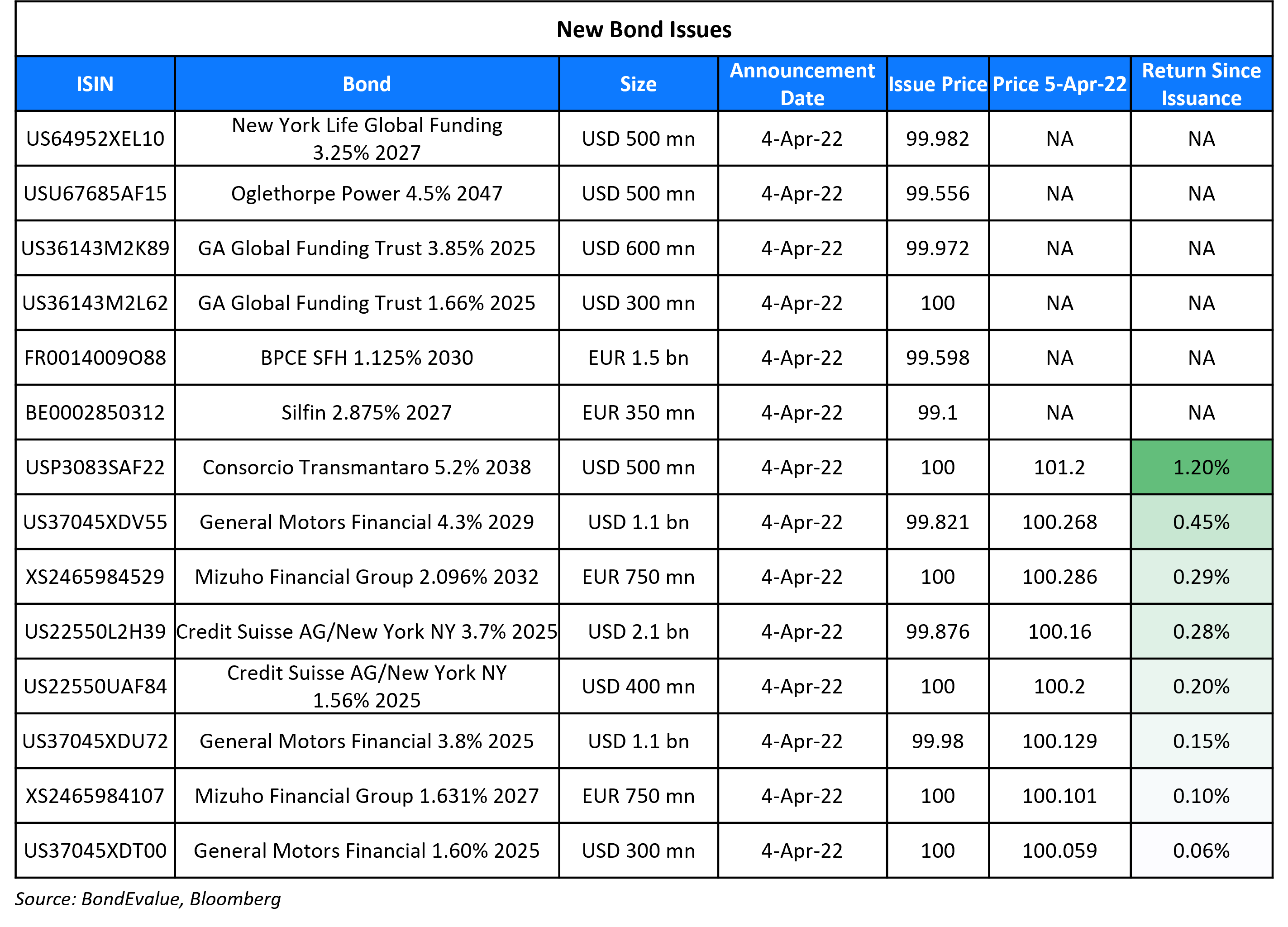 Credit Suisse raised $2.5bn via a dual-trancher. It raised:

The bonds are rated A1/A+. The issuer is Credit Suisse AG/New York NY. Proceeds will be used for general corporate purposes. The new 3Y fixed bond was priced ~17bp tighter to Credit Suisse’s existing 3.75% bonds due March 2025 that yield 3.92%.

GM Financial raised $2.5bn via a three-tranche deal. It raised:

The bonds have expected ratings of Baa3/BBB. Proceeds will be used for general corporate purposes. The bonds are issued by General Motors Financial Co Inc (GM).

Lendlease Global Commercial REIT raised S$200mn via a PerpNC3 bond at a yield of 5.25%, 25bp inside initial guidance of 5.5% area. The bonds are unrated and received orders over S$775mn, 3.9x issue size. Private banks, which will receive a 25-cent concession, were allotted 70% of the deal with insurance companies, fund managers and banks taking 30%. Singapore accounted for 98% while others took 2%. RBC Investor Services Trust Singapore is the issuer. The coupon will reset at the end of year three to the prevailing SORA-OIS plus the initial credit spread of 304.3bp, if not called. Proceeds will be used for debt refinancing and potential acquisitions, including the purchase of the remaining stake in the Jem shopping mall, as well as for general working capital needs.

An acceleration notice is a bond clause which allows lenders to demand a borrower to immediately repay a bond if specific requirements are not met. Thus the borrower must immediately pay unpaid principal and accumulated interest prior to the invocation of the notice. These notices are generally given when a borrower materially breaches the loan/debt agreement.

“The reckoning time has come. The government and the central bank have ignored it. What’s not clear is whether the current president will survive this episode of protests.”

“Rollover risk is very high. [The country’s debt service needs each year] “will require access to very large amounts of external financing at concessional rates and long maturities, sustained over many years.”

“Sabry defended the president against corruption charges in the past… appointment doesn’t appear to be based on his technical expertise… unfortunate as the previous finance minister was supposed to be seeing the IMF for talks in Washington next week — all very messy.”

“The most important thing for me is that we will start this process not very late in the year and have the opportunity to be out of negative territory by the turn of the year… We’re still expecting quite strong positive growth rates, and if that scenario materializes I don’t see any reasons why we wouldn’t continue with policy normalization after the turn of the year and go above zero with interest rates”

On Morgan Stanley Says ‘Bear Market Rally’ Is Now Over

“The bear market rally is over. That leaves us more constructive on bonds than stocks over the near term as growth concerns take center stage – hence our doubling down on a defensive bias.”

“Geopolitics remains a wild card, but we do not see equities fundamental risk-reward to be as bearish as it is currently fashionable to portray”