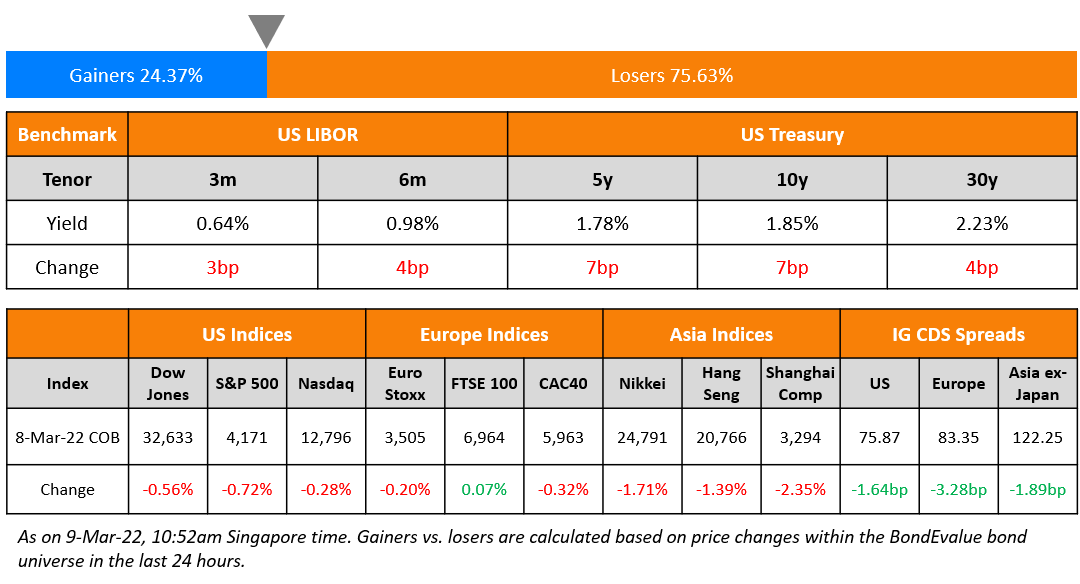 US equity markets ended lower again on Tuesday with the S&P and Nasdaq closing 0.7% and 0.3% lower. Sectoral losses were led by Consumer Staples and Healthcare, down over 2% each. European markets were stable – the DAX and FTSE were flat while the CAC was down 0.3%. US 10Y Treasury yields picked up by 7bp to 1.85% as the risk-off sentiment eased slightly. Brazil’s Bovespa ended 0.4% lower. In the Middle East, UAE’s ADX was up 0.6% and Saudi TASI was up 0.3%. Asian markets have opened mixed – Shanghai and HSI were down 1.1% and 2.2% while STI and Nikkei were up 0.9% and 0.3% respectively. US IG CDS spreads tightened 1.6bp and HY spreads were 6.8bp tighter. EU Main CDS spreads were 3.3bp wider and Crossover CDS spreads were 11.5bp tighter. Asia ex-Japan CDS spreads were 1.9bp tighter. 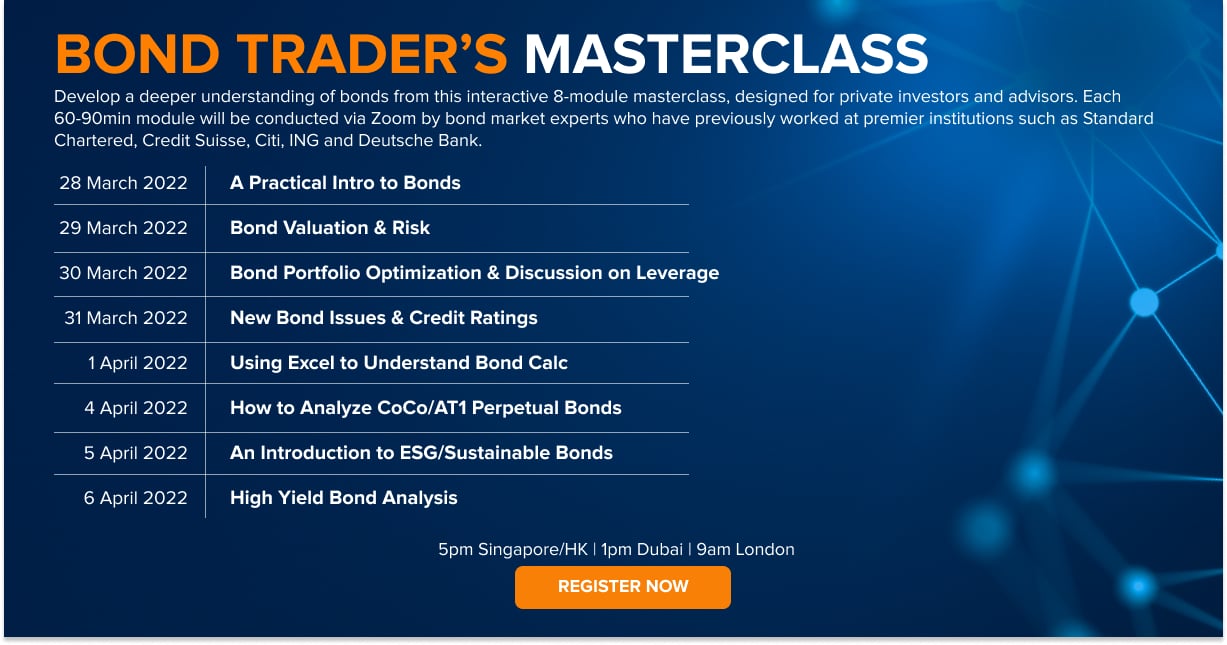 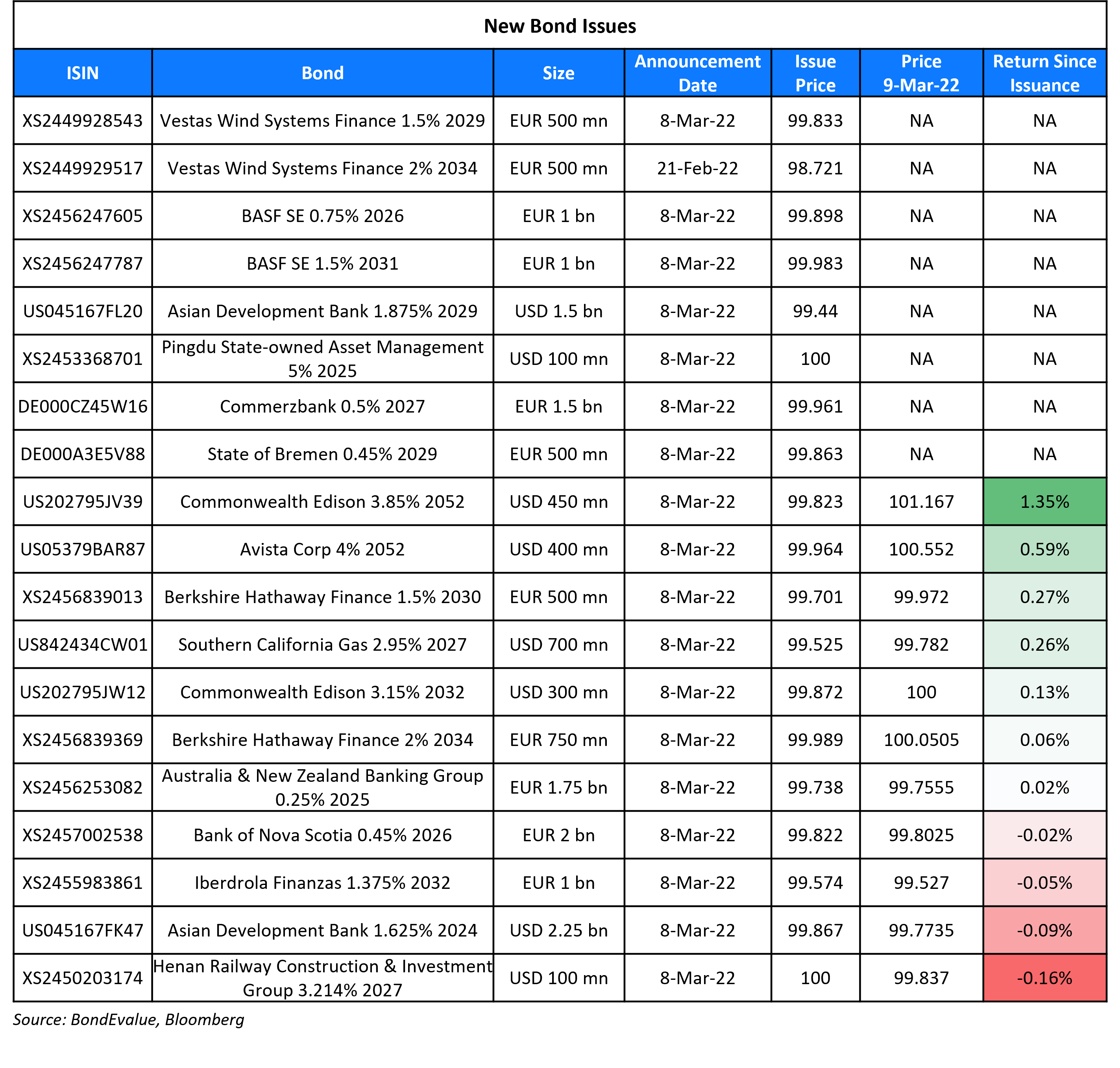 Henan Railway Construction & Investment raised $100mn via a 5Y green bond at a yield of 3.214%, unchanged from initial guidance of T+150bp area. The bonds were rated A2 by Moody’s. Proceeds will be used to finance, refinance and replenish the working capital of eligible green projects.

HDB raised S$1bn via a 5Y green bond at a yield of 1.845%, unchanged from guidance of 1.845%. The bonds are rated AAA, and the deal was upsized from S$800mn. “This is the only name that can still print in the current market conditions since it’s almost like a proxy to the Singapore government,” said a syndicate banker. Proceeds from the new bond will be used to fund or refinance eligible green projects under the framework.

Superdowngrades are an informal term given to rating downgrades of three or more notches. In the recent Russia-Ukraine crisis, Russia was given a 6 notch superdowngrade by Fitch to B from C. S&P earlier also gave a superdowngrade to Russia by 8 notches to CCC- from BB+.

“We expect higher oil prices will lead to lower sukuk issuance in 2022, largely driven by lower financing needs… The economic recovery in key Islamic finance markets will boost credit growth and demand for Shariah-compliant products and we expect Islamic banks’ asset growth to continue to outperform their conventional peers

On Gundlach Warning US Inflation May Hit 10%, Forcing Fed’s Hand

“Their job is to fight inflation. They’ve done a terrible job of it so far”

“We’re definitely getting more concerned” about the possibility of recession

On China Sovereign Bonds Tumbling From No. 1 Ranking as Funds Flee

“China rates have failed to follow the decline in U.S. Treasuries amid global risk-off trades… credit policies may turn more proactive in the near term”

“The general trend for past few years has been outperformance of China bonds versus rest of the world. However, global bond investors have started to shift to a more risk-off stance amid the market volatilities triggered by the recent geopolitical events, with a preference toward developed market bonds such as the U.S. Treasuries”

On Investors shifting to Latam amid war in Europe, but risks remain

“Amid all the current volatility, Latin America may have some opportunities. Some markets may be positively impacted by higher commodity prices, and also by a higher volume of investment flows by Emerging Market portfolio managers”

“The main impact on Latin America is coming via commodity price moves – this seems to have supported currencies like the Brazilian real and Colombian peso. Insofar as there are clearer beneficiaries from these commodity price moves, it’s the oil exporters like Colombia”

“My overall view that if you’re a long-term fundamental bull it probably has to be Chile. “If you’re looking for a short-term bounce, or a really strong reversal, it’s Brazil. And Argentina has a long-shot trade here on the commodity boom – it’s so hated by everybody, and is basically so oversold, that there’s little risk of downside at this point.” 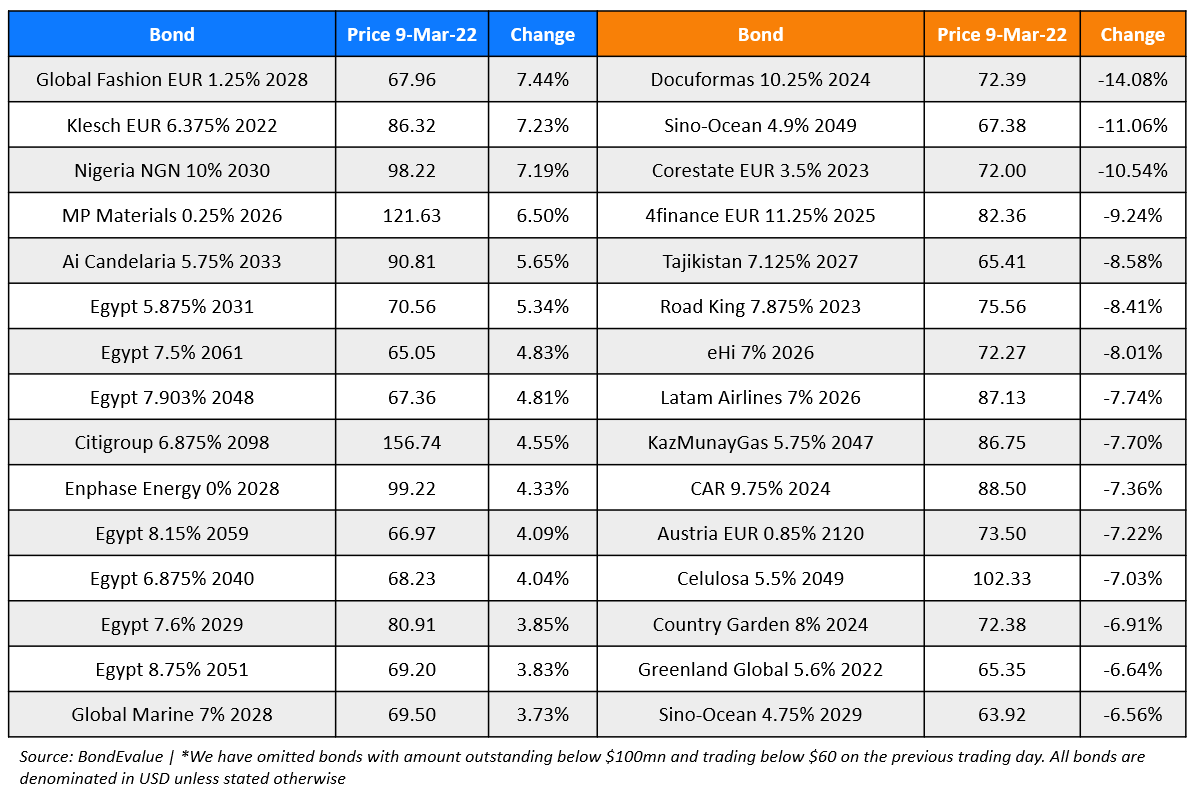