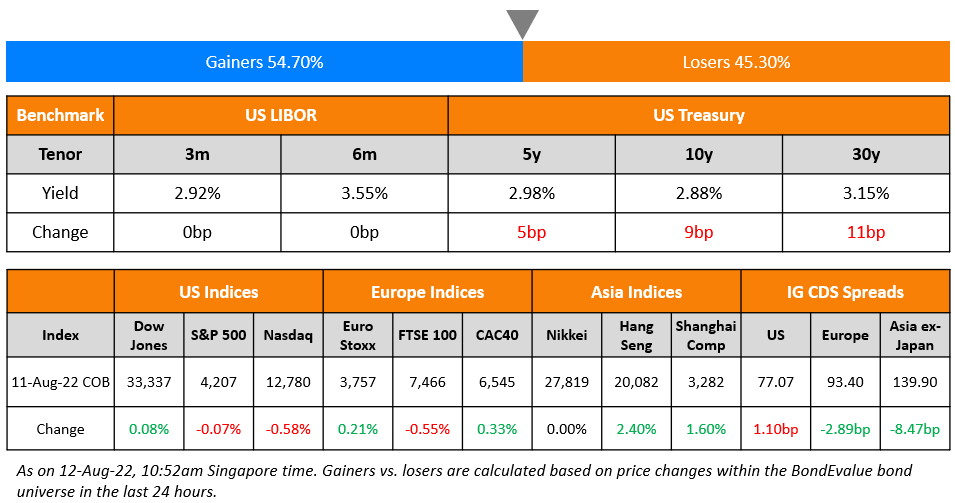 US equity markets was mixed on Thursday with the S&P ending flat and Nasdaq down 0.6%. Sectoral gains were led by Energy up 3.2%, followed by Financials gaining 1% while Health Care led the losses, down 0.7%. US 10Y Treasury yields rose by 9bp to 2.88% on easing inflation and optimistic sentiment in the economy. European markets were also mixed – DAX was flat, CAC was up 0.3% while FTSE was down 0.6%. Brazil’s Bovespa fell 0.5%. In the Middle East, UAE’s ADX and Saudi TASI rose 1% and 0.8% respectively. Asian markets have opened mixed – Shanghai and STI were down 0.2% and 0.9% respectively while HSI and Nikkei were up 0.3%, and 2.4% respectively. US IG CDS spreads widened 1.1bp and US HY spreads were wider by 4.5bp. EU Main CDS spreads were 2.9bp tighter and Crossover spreads tightened by 6bp. Asia ex-Japan IG CDS spreads also tightened by 8.5bp.

The central bank of Mexico hiked its benchmark rate by 75bp to 8.5%, the highest since 2008, as inflation hit a 22-year high of 8.15% in July. The central bank has now raised rates by a total of 450bp in the last 10 policy meets. Another South American nation, Argentina lifted its Leliq rate by 950bp to 69.5% due to a two-decade high inflation of 71%. This comes just two weeks after the central bank raised rates by 800bp. Inflation is expected to surge to 90% by the end of 2022.

Santander raised $3.5bn via a two-tranche deal. It raised

The senior non-preferred bonds have expected ratings of Baa1/A-. Proceeds will be used for general corporate purposes. The bonds may be redeemed early should the notes fail to qualify as TLAC/MREL eligible instruments of the issuer.

Volvo Treasury raised €500mn via a 5Y bond at a yield of 2.035%, 32bp inside the initial guidance of MS+85bp area. The senior unsecured bonds have expected ratings of A2/A-, and received orders over €3.2bn, 6.4x issue size. Proceeds will be used for general corporate purposes.

Shandong Shipping raised $200mn via a 3Y bond at a yield of 5%, 30bp inside the initial guidance of 5.3% area. The bonds are unrated. Proceeds will be used to repay the company’s offshore debt due in 2022 and to supplement liquidity.

Greenwashing is a term used to describe corporate/government marketing practices that emphasize on its environmentally-friendly initiatives that are, in truth, vastly overstated. While this is not a new term, its relevance has increased over the past few years with the surge in green, social and sustainable bond issues, with several institutional investors and industry bodies questioning the intent and/or effectiveness of these bond issues. The term greenwashing was coined by environmentalist Jay Westerveld in 1986 and originates from his visit to the Beachcomber Resort in Fiji in 1983. He noticed that the resort had placed a note beside the towel stand that encouraged patrons to reuse towels to reduce ecological damage. However, looking at the ongoing construction of new bungalows and vast amounts of wastage at the resort, it was clear to Westerveld that the resort did not care much for the environment and were simply looking to reduce its expenses associated to towel cleaning.

Bond issuers had initially taken to the ESG market as greeniums offered lower financing costs. However, the markets are thinking twice about the merits of doing so at the risk of greenwashing accusations. Despite the cost savings, issuing ESG bonds comes with a high level of scrutiny post-issuance. Therefore, issuers have to consider the reputational risk that they may incur before sending ESG debt to the market if if may not yet be fit for purpose. For example, Chanel was recently thrown into the spotlight for missing an interim renewable energy target for 2021 on a sustainability-linked bond.

On Seeing a Half-Point September Hike; No Inflation Victory

“The July figures are significant in that they are saying that we’re seeing some improvement but they’re not victory…It really behooves us to stay data dependent and not call it….I think of raising them to a level that we know is going to be appropriate and then holding them there for a while so that we continue to bring inflation down until we’re well and truly done…That indignity of inflation is what’s really cruel about inflation — it hurts people who have less, it hurts them more and it has that sense that you’re trying as hard as you can and you still can’t make it.”

On the Stock-Market’s Rally as Misguided Euphoria

“The inverted yield curve shows that the current Fed policy path will eventually put the US into recession…The longer the inversion continues, the more investors as well as consumers will become nervous about a recession, and that might have almost self-fulfilling consequences.”

“Even if the curve is just really flat, like it is now, that’s not good news…Just going by the market and the hikes being priced in, it looks to me that we will get the full inversion of the 3-month to 10-year rate. And that will be a code red for me.”

On Markets Ignoring the Feds as Financial Conditions Ease

“I don’t really care what the Fed is going to do because the Fed isn’t driving this ship…The case for additional Fed tightening is rapidly dissipating…it’s interesting how much attention we devote to the Fed because the Fed has been behind the curve the whole time. Fortunately, inflation is coming down today not because the Fed lifted the funds rate for the first time in February this year, because monetary growth, fiscal growth, dollar growth, yield growth, were tightening all last year and that’s what’s bringing a slower economy and slower inflation…I think the debate on ‘inflation has peaked’ – I think that’s over. The Fed is still behind the curve but all the markets are going the other way and starting to ease. That is about a one-year lag policy has on the economy and inflation. And that lag is going to continue to be negative moving forward.”

On Inflation Spiking in Indonesia for the Rest of 2022

“Expected interest rate hikes by the central bank may dampen the speed of growth trajectory in the near future.”

“Risks of higher inflation has started to rise once again…Rising raw food prices has the potential to cause higher inflation in food away from home, such as restaurants, and other components of core inflation.” 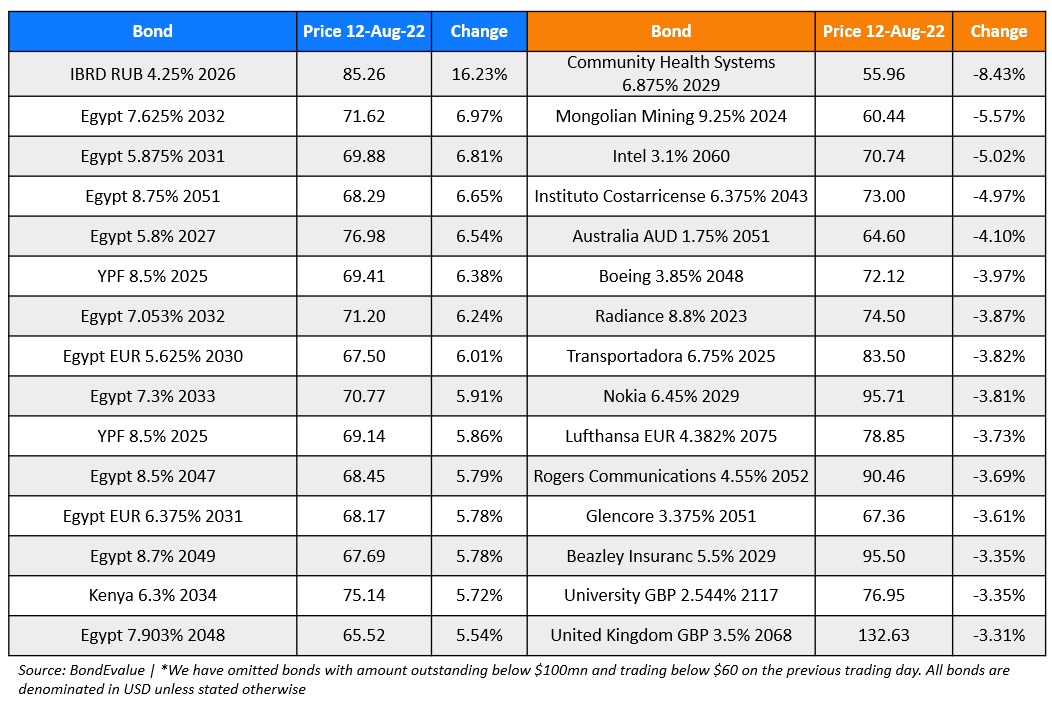