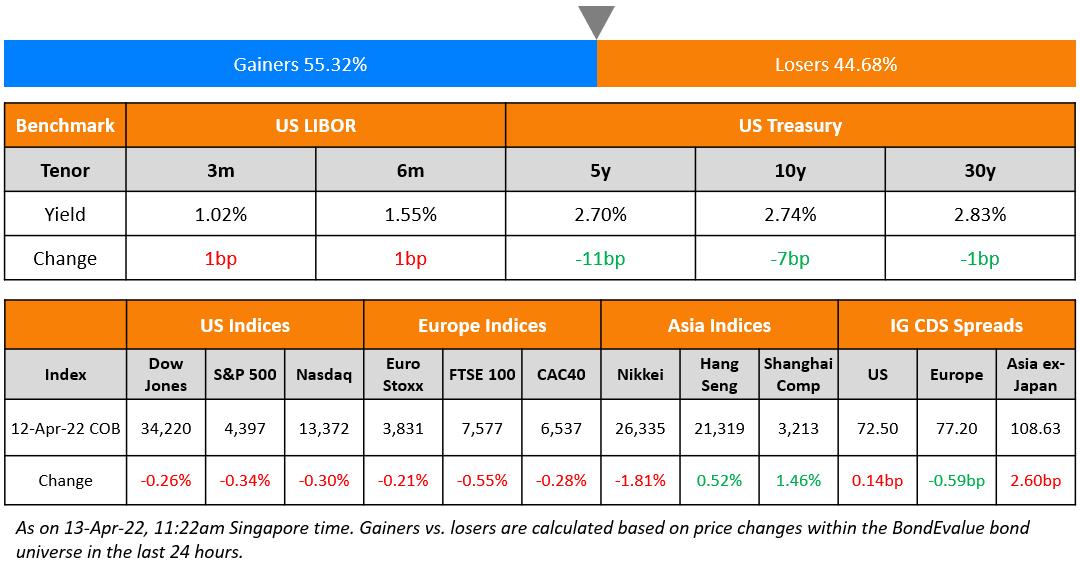 US equity markets fell marginally on Tuesday with the S&P and Nasdaq down 0.3% each. Sectoral losses were led by Financials and Healthcare, down over 1% each. US 10Y Treasury yields fell 7bp to 2.74% after Core CPI came softer than expected. European markets were also lower – the DAX, CAC and FTSE were down 0.5%, 0.3% and 0.6%. Brazil’s Bovespa ended 0.7% lower. In the Middle East, UAE’s ADX was down 0.6% while Saudi TASI was up 1.2%. Asian markets have opened with a positive bias – HSI, STI and Nikkei were up 0.2%, 0.7%, 1.6% while Shanghai was down 0.4%. US IG CDS spreads widened 0.1bp while HY spreads were 2.3bp tighter. EU Main CDS spreads were 0.6bp tighter and Crossover CDS spreads were 5.6bp tighter. Asia ex-Japan CDS spreads widened 2.6bp. 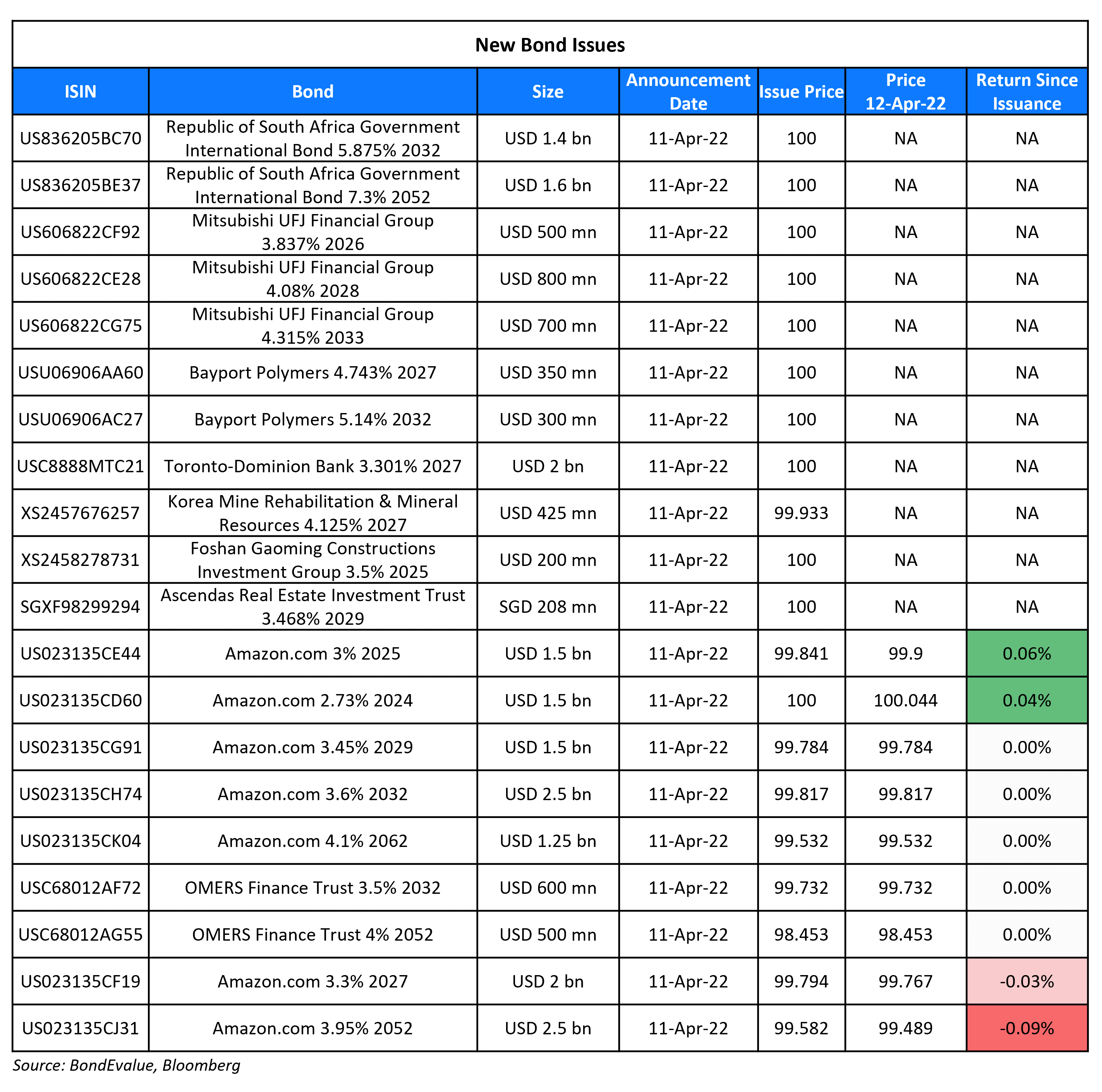 Ascott REIT raised S$200mn via a 5Y sustainability-linked bond (SLB) at a yield of 3.63%, 22bp inside initial guidance of 3.85% area. The bonds are rated BBB-. Private banks will receive a 15-cent concession. The bonds are issued by Ascott REIT MTN and guaranteed by DBS Trustee. The bonds come under ART’s sustainability-linked financing framework on which Vigeo Eiris has provided a second-party opinion. The bonds have a coupon step-up of 25bp at maturity if it does not meet the core sustainability performance target. This requires 50% of the company’s total gross floor area to be awarded green building standards or certifications by end-December 2025. ART had about 33% of its properties green-certified as of end-2021. The trust aims to have 100% of its gross floor area certified with green standards by 2030.

Yivu State Owned Capital raised $500mn 3.5Y bond at a yield of 4.1%, 40bp inside initial guidance of 4.5% area. The bonds are rated Baa3/BBB (Moody’s/Fitch), and are be issued by Chouzhou International Investment and guaranteed by parent Yiwu State-owned Capital Operation.. Proceeds are for refinancing of offshore debt.

CITIC Securities International raised $300mn via a 3Y bond at a yield of 3.499%, 35bp inside initial guidance of T+25bp area. The bonds are rated BBB+. The bonds are issued by CSI MTN and guaranteed by parent Citic Securities. Proceeds will fund working capital and general corporate needs, or will be used to refinance debt.

A storm bond is a municipal bond which will be issued by Texas for eight of its gas utilities to pay for the cost of natural gas which rose significantly due to the winter storm Uri in early 2021. The state plans to raise $3.4bn via the storm-bond issuance.

“How far we will need to raise rates, in fact, won’t be clear until we get closer to our destination, but rest assured we will do what we must to address this recent bout of above-target inflation. The best short-term path for us is to move rapidly to the neutral range”

“We are doing that by tightening monetary policy methodically, and it is through a series of interest rate increases as well as beginning that balance sheet runoff… In terms of exactly what the right pace of that set of increases in the policy rate from meeting to meeting, I don’t really want to focus on that”

“With U.S. rates no longer low in absolute terms, there are collateral damage to EM/Asia government bonds”

“With inflationary pressures rising due to elevated commodity prices, Asian central banks are increasingly mulling rate hikes. This, coupled with the Fed about to embark on quantitative tightening, will keep portfolio flows in the region volatile in the near term.”

On Peru Bonds Slip as Investors Lose Patience With Politics

“My worry is not a move to the left, it’s just a complete meltdown of policymaking. In this environment for global fixed income, it’s very hard to see any value in Peru.”

“People weren’t all too optimistic about Castillo in the first place, so a change may be welcome. But it will depend on what that change means, how they’ll work with congress and what the agenda is.”

“Peru is on the path to losing investment grade status”

“The (consumer price) index is going to exceed 6%, it will be the highest of the year”. International market pressures were also weighing on the South American country’s rising prices.