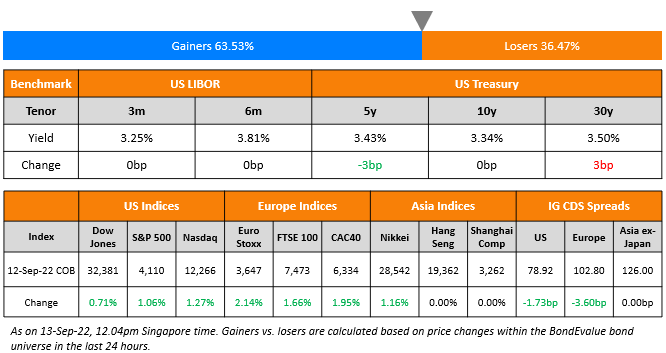 US 10Y Treasury yields were flat at 3.34%, with US IG CDS spreads tightening 3.1bp and US HY spreads tightening 17.7bp. The broad risk-on tone continued as US equity markets continued its upward move on Monday – the S&P and Nasdaq were higher by 1% and 1.3% respectively. US CPI is forecasted at 8.1% and Core CPI at 6.1% for August, with the data release due later today. As per economists, headline inflation is expected to soften from its 8.5% print in July while core inflation is set to rebound from 5.9% in July. The New York Fed’s consumer expectations survey noted that the 3Y inflation outlook in the US fell to 2.8% in August from 3.2% and 3.6% in July and June respectively. The 1Y inflation outlook fell to 5.7% from 6.2% in July.

European markets posted solid gains with the DAX, CAC and FTSE up by 2.4%, 2% and 1.7% respectively. EU Main CDS spreads tightened by 3.6bp and Crossover spreads were 15.8bp tighter. Brazil’s Bovespa was up 1%. In the Middle East, UAE’s ADX and Saudi TASI ended up 1.4% and 0.7% respectively. Asian equity markets have opened broadly positive, up ~0.5% today. Asia ex-Japan CDS spreads were flat. 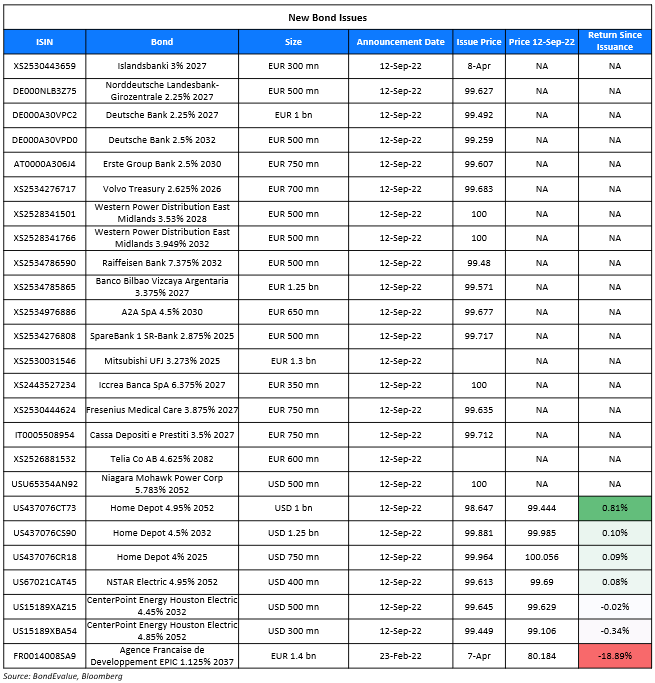 The bonds had expected ratings of Aaa (Moody’s). The bonds are issued under the Mortgage Pfandbrief (Hypothekenpfandbrief) format as per Bloomberg.

Sustainability-linked bonds (SLBs) are bonds wherein the issuer commits to sustainability outcomes within a timeline set in the bond document based on five elements:

Here however, the proceeds can be used for general purposes but the characteristics of the bond can change depending on the issuer meeting their KPIs set in the document. SLBs come with a coupon ste-up if the issuer fails to meet its goal(s) within the specified time period in its framework.

On US Inflation Expectations Dropping in August – New York Fed

Expectations for US inflation three years ahead fell to 2.8% in August, from 3.2% the previous month and 3.6% in June… Median home-price expectations declined sharply by 1.4 percentage points to 2.1%, its lowest reading since July 2020. The decline was broad based across demographic groups and geographic regions.”

“The argument is that stocks are a better asset to own than bonds in such a regime and therefore deserve a lower risk premium… While we agree with the premise of that argument and, in fact, used that exact statement to go all in on stocks in late March 2020, we don’t think it’s an appropriate rationale today if one believes we are entering a significant cyclical downturn for earnings forecasts”

“The primary market remains subdued with little signs of pick-up, compelling us to revise down our 2022 (EM corporate) issuance forecast once more to $260 billion from $400 billion… We do not anticipate a strong rebound in issuance in the foreseeable future” 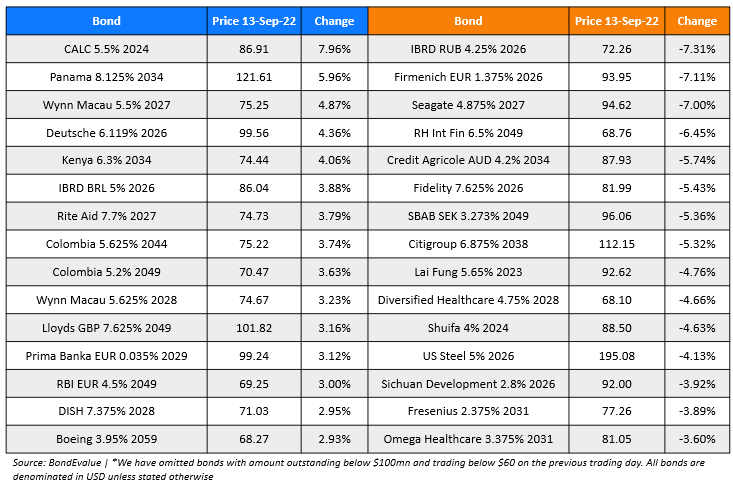