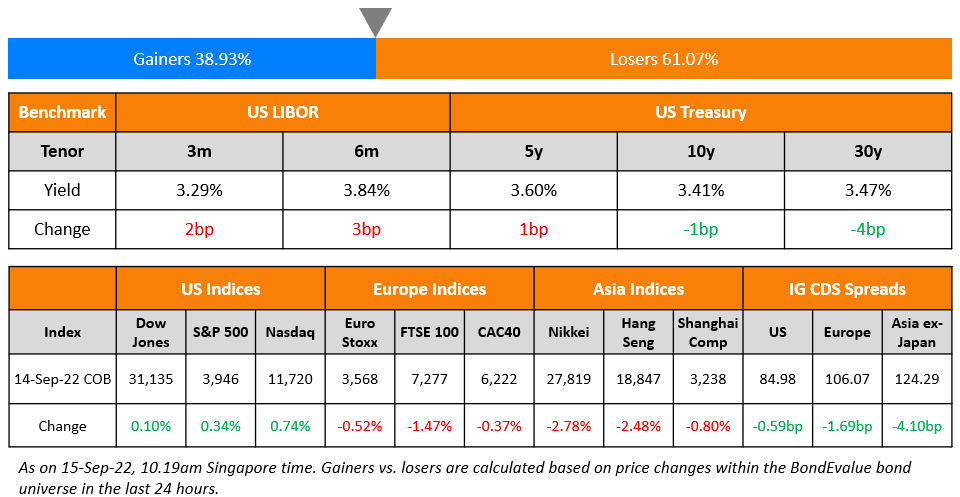 Market activity in the US was relatively muted with the US 10Y Treasury yields 1bp lower at 3.41%. US equity markets ended slightly higher on Wednesday after the massive CPI release-led sell-off a day earlier – S&P and Nasdaq rose 0.3% and 0.7% respectively. US IG CDS spreads tightened 0.6bp and US HY spreads narrowed 6.9bp. US mortgage interest rates rose above 6% for first time since 2008 and have doubled in the last one year as aggressive rate hikes by the Fed have weighed on mortgage lending. European markets were in the red with the DAX, CAC and FTSE down 1.2%, 0.4% and 1.5% respectively. EU Main CDS spreads tightened 1.7bp and Crossover spreads were 5.7bp tighter. The EU proposed a plan to cap revenues of electricity producers making windfall profits. It said that levies worth $140bn could be imposed and this would be distributed across its member states – the funds would help those suffering from higher energy prices. Separately, France has capped electricity and gas price hikes at 15% for the upcoming year and thus budgeted a $16bn net cost to the state. 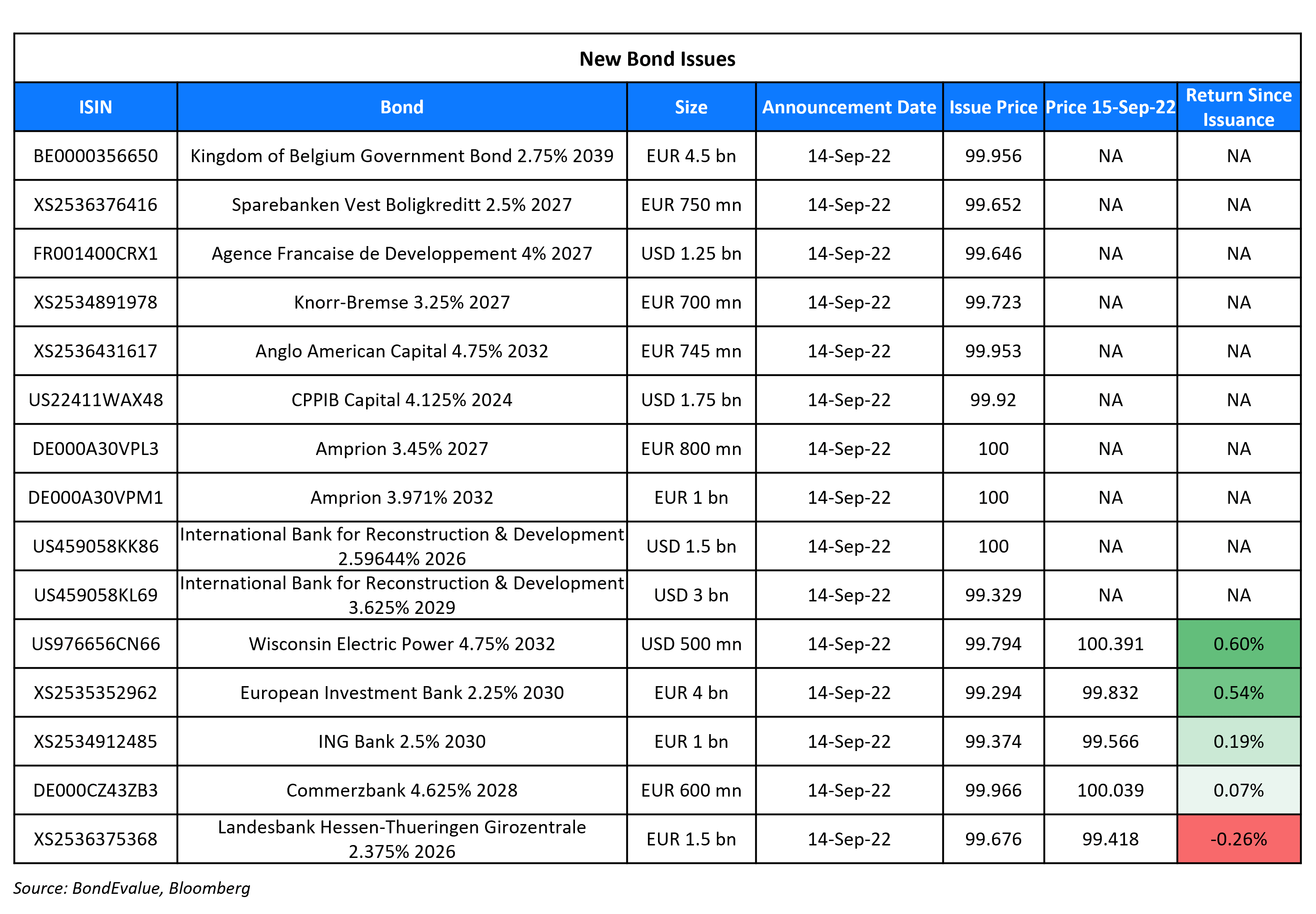 Commerzbank raised €600mn via a 5.5NC4.5 bond at a yield of 4.64%, 20bp inside initial guidance of MS+240bp area. The senior bonds have expected ratings of Baa2/BBB-, and received orders over €1.1bn, 1.8x issue size. If not called by the optional redemption date of 21 March 2027, the coupon will reset to the 3M Euribor (Term of the Day, explained below) plus a margin of 220bp, payable quarterly.

ING Bank raised €1bn via a 7Y covered bond at a yield of 2.595%, 2bp inside initial guidance of MS+11bp area. The covered bonds have expected ratings of Aaa/AAA/AAA, and received orders over €1.4bn, 1.4x issue size. The coupon rate is fixed at 2.5% until the maturity date of 21 February 2030, and would reset to the 1M Euribor plus a spread of 9bp, monthly, until the extended maturity date of 21 February 2031.

Euribor is an average unsecured inter-bank rate complied from a panel of 20 large European banks that lend money on an overnight basis to one another in Euros. Maturities on loans used to calculate Euribor often range from one week to one year. Euribor is generally considered as a reference rate for pricing bonds denominated in Euros. The equivalent of Euribor in the US is the USD Libor rate.

Believes the Fed will likely do a 75bp hike at its next meeting, but prefers 25bp because he is concerned the Fed might oversteer the economy and hasn’t paused long enough to see what effect the previous hikes have already had.

“We expect that this transition will require us to continue to raise interest rates over the next several meetings… The appropriate size of an individual increment will be larger, the wider the gap to the terminal rate and the more skewed the risks to the inflation target”

“The Fed may be creating different problems this time. Trading liquidity has been steadily getting worse all year and rivals the worst of the March 2020 period. Corporate distress has also risen… Realized volatility is almost seven percentage points above its historical mean, while implied is nearly four points above its mean. You have to go back to the Great Financial Crisis and the European sovereign debt crisis to find comparable levels before the pandemic”

“It’s becoming increasingly difficult to find credible SLBs. The banks are pitching these structures really hard so I definitely approach them with a healthy degree of skepticism… The banks are trying to structure them in such a way that is attractive for the issuer and right now investors are falling over themselves to buy these bonds… The banker could theoretically say to their issuer, ‘Here are the bare minimum targets you need,’ and the market will accept it” 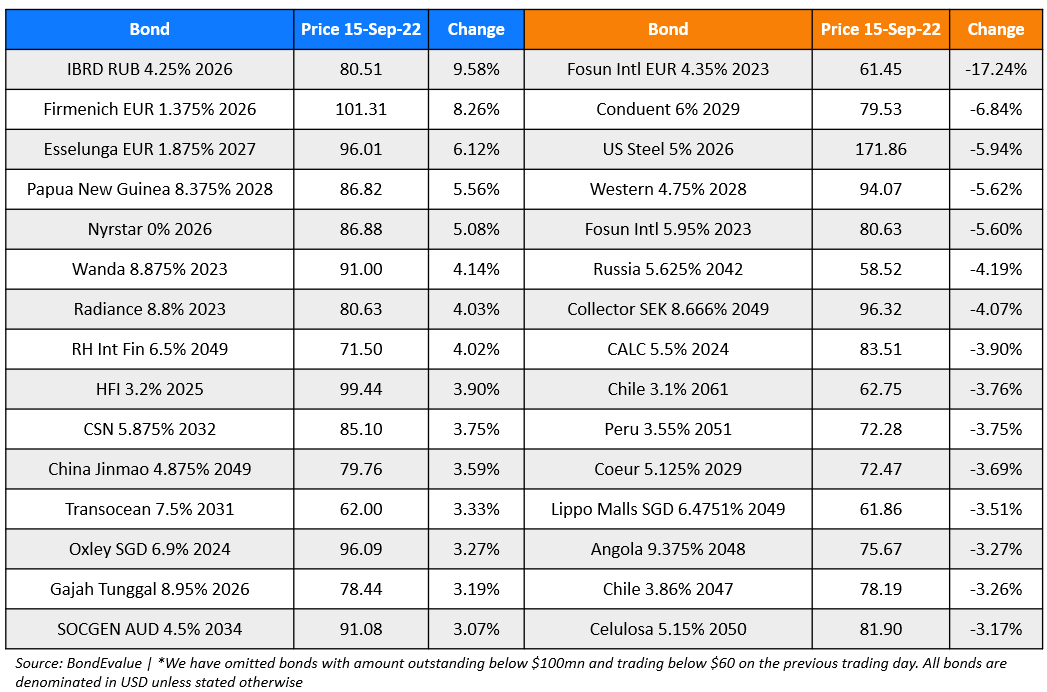