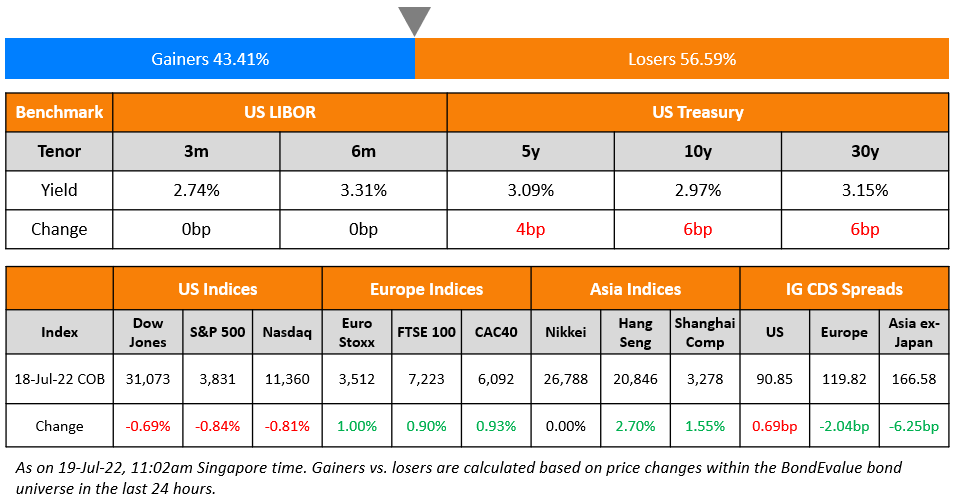 US equity markets started the week lower on Monday with the S&P and Nasdaq down 0.8% each. Sectoral losses were led by Healthcare, down 2.15% followed by Utilities dropping 1.4% while Energy posted a gain of 2%. US 10Y Treasury yields were 6bp higher at 2.97%. European markets were in the green with the DAX up 0.7% and the CAC and FTSE up 0.9% each. Brazil’s Bovespa was up 0.4%. In the Middle East, UAE’s ADX closed 0.1% higher and Saudi TASI rose 2.3%. Asian markets have opened broadly lower – Shanghai, HSI, and STI were down 0.3%, 1.1% and 0.3% respectively while Nikkei was up 0.7%. US IG CDS spreads were wider by 0.7bp and US HY spreads widened by 3.4bp. EU Main CDS spreads were 2bp tighter and Crossover spreads were tightened by 15.6bp. Asia ex-Japan IG CDS spreads tightened 6.3bp.

Turkey’s central government posted fiscal deficit of TRY 31.1bn ($1.8bn) for June vs. a surplus of Lira 144bn ($8.2bn) in May. The deficit was led by increased spending on current transfers and personnel wages. Turkey’s expenditure rose 87% and spending on wages surged 58.6% YoY. However, on a YTD basis, Turkey is still in a budget surplus of TRY 94bn ($5.4bn).

JP Morgan raised $7bn via a dual-trancher. It raised

Morgan Stanley raised $4bn via a dual trancher. It raised

The bonds have expected ratings of A1/A-/A.

Wells Fargo raised $6.5bn via a two-tranche deal. It raised

The bonds have expected ratings of BBB+.

Huai’an Traffic Holding raised $238mn via a 3Y bond at a yield of 5.5%. The bonds have expected ratings of BB (Fitch). Proceeds will be used to refinance the company’s offshore debt.

Jiangsu Century New City raised $115mn via a 364-day bond at a yield of 6.5%. Proceeds will be used for refinancing and general corporate purposes.

Murabaha is an Islamic financing structure where a seller and buyer agree to the cost plus a markup of an asset. It is also known as “Cost-Plus financing”. The seller beforehand declares his cost and profit to the buyer. In the Islamic banking space, since charging interest is prohibited the Murabaha model offers a solution for banks to be able to make money. Banks purchase a commodity/product for the customer, a profit margin mark-up is agreed to by both parties and the bank is typically repaid in instalments. With regard to a financing facility, a bank may raise funds via Murabaha financing and repay its lenders on a cost plus basis.

Ahli United Bank concluded a $1.1bn sustainability Murabaha financing facility, the first ever of its type by a financial institution.

“The cost of not tightening promptly enough would be relatively high at present. I do not regard such an outcome (ie that Bank Rate will have to rise to 2% or higher during the next year to return inflation to target) as implausible or unlikely. The tightening cycle may still have some way to go.”

“It’s another month of selling by foreign investors. But it seems like the selling is starting to slow because in May, the move higher in interest rates faded a little bit… Japan and China were selling which is real a continuation of recent trends. We got another month of selling from Japan, but if you look at the pace, there was certainly a deceleration. Nothing like we saw in March at the end of Japan’s fiscal year.”

“I think that in those circumstances, for a limited period of time, to have said, ‘Yes, tapering the balance sheet has to happen over an extended period of time to avoid disrupting markets, but we’re going to begin raising interest rates even before that taper is complete because now is the time to move more aggressively in the response to inflation,’ I think that would’ve been wise” 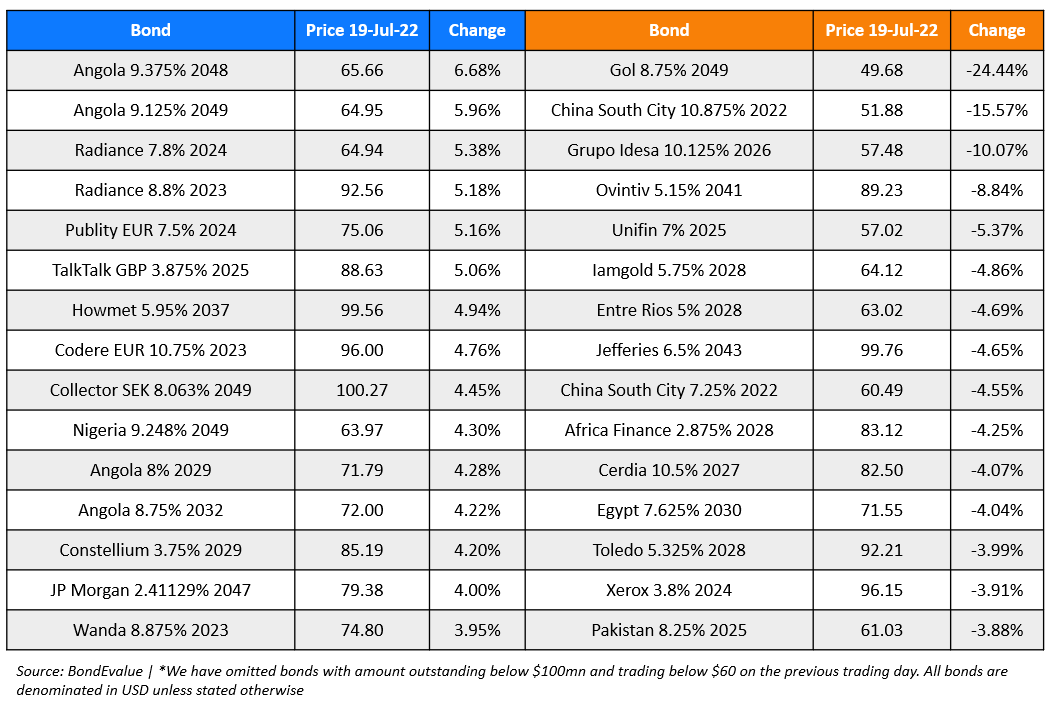