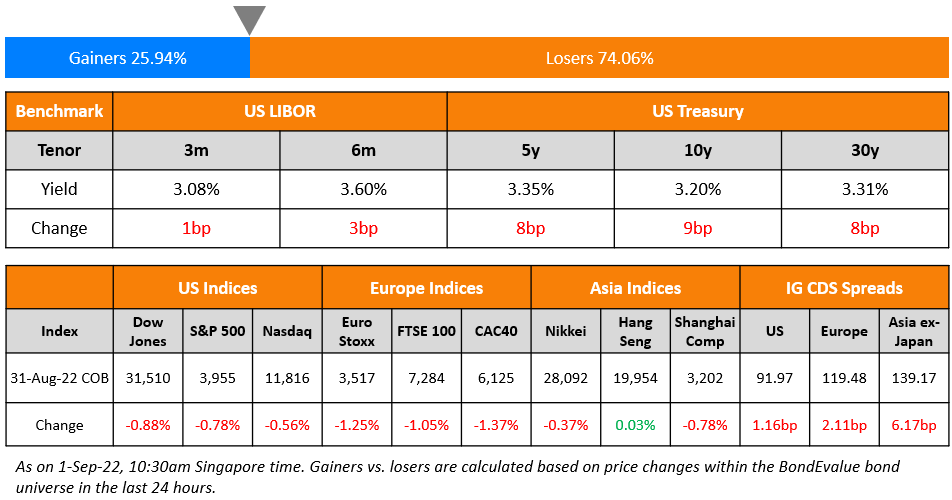 US equity markets dipped further on Wednesday with the S&P and Nasdaq down 0.8% and 0.6% respectively. Sectoral losses were led by Materials, down 1.2%, followed by Consumer Discretionary and IT declining 1% each. US 10Y Treasury yields jumped 9bp higher to 3.2%. Meanwhile, the US 2Y Treasury yield touched 3.5%, the first time since 2007 on expectations of more rate hikes by the Fed. This was especially after Powell’s hawkish speech at Jackson Hole last Friday.  European markets ended lower – DAX, CAC and FTSE were down 1%,1.4% and 1% respectively. Brazil’s Bovespa fell 0.8%. In the Middle East, UAE’s ADX and Saudi TASI lost 0.9% and 1.4% respectively. Asian markets have opened mixed today – Shanghai was up 0.3%, HSI and Nikkei were down 0.9% and 1.5% respectively while STI was flat. US IG CDS spreads widened 1.2bp and US HY spreads were wider by 5.1bp. EU Main CDS spreads 2.1bp wider and Crossover spreads widened by 7.1bp. Asia ex-Japan IG CDS spreads widened 6.2bp.

Eurozone inflation rose to its highest since 1997 at 9.1% YoY, more than estimates of 9% and also higher than the 8.9% print in July. Energy prices shot up 38.3% and food prices rose 10.6%. This higher inflation print has now raised expectations of a 75bp rate hike at the next ECB September policy meeting – banks like Goldman Sachs, Nordea Bank and Danske Bank now expect the same next month.

The mortgage covered bonds have expected ratings of Aa1.

Societe Generale raised €500mn via a 10NC5 Social Tier 2 bond at a yield of 5.355%, 20bp inside initial guidance of MS+330bp area. The Tier 2 bonds have expected ratings of Baa3/BBB-/BBB, and received orders over €1.1bn, 2.2x issue size. Proceeds will be used to finance Eligible Social Activities as defined in the ‘Sustainable & Positive Impact Bond Framework’ of Societe Generale Group. The bonds have a call date of 6 September 2027. If not called, the coupon rate resets to 5Y EURIBOR plus a spread of 310bp.

The senior unsecured bonds have expected ratings of Aa2/AA/AA-. Proceeds will be used for general corporate purposes.

Lloyds Banking Group raised £750mn via a PerpNC5.5 AT1 bond at a yield of 8.5%, 25bp inside initial guidance of 8.75% area. The bonds have expected ratings of Baa3/BB-. Proceeds will be used for general corporate purposes including repurchasing or refinancing existing debt and/or existing securities. The bonds will be callable from 27 September 2027 till its first reset date of 27 March 2028. If the bonds are not called back by 27 March 2028, the coupon will reset to the 5Y Euribor plus a spread of 588.3bp. Thereafter, the coupon will reset every 5 years with the bonds callable for a period of 6 months prior to its reset date. The bank also has the right to call back its AT1s in the event of tax changes or regulatory/capital disqualification. Additionally, the AT1 has a mechanical trigger which gets activated if the group’s CET1 ratio falls below 7%. The group’s CET1 ratio stood at 14.7% as of end-June 2022. The new bonds are priced 31bp wider to its existing 8.875% Perps callable in 2027 that yield 7.69%. The new AT1s also offer a pick up of 28bp compared to its existing 7.875% Perps, callable in 2029 that yield 8.22%.

Credit Suisse raised £1.5bn via a two-part deal. It raised:

The bonds’ coupons are fixed until their optional redemption dates. If not called, the coupon rate will reset at the 1Y UK Treasury Yield plus the initial spreads of 440bp and 475bp respectively. The bonds have expected ratings of Baa2/BBB/BBB.

Coupon step-up refers to a feature seen in certain bonds wherein the coupon increases (steps-up) either as per a predefined schedule or upon the occurrence of an event. Coupon step-ups can either be a single step-up or multiple step-ups through the life of the bond. A commonly seen step-up is for perpetual bonds, wherein the coupon increases in the event that the bond is not called on its first call date.

“I see no reason to show any kind of leniency in our positioning and our wish to reduce inflation…We still see a major task in front of us and we need to address this task with determination, which means we need to move as quickly as possible toward and quite likely beyond the equilibrium interest rate”.

On the Market Underestimating Fed Risk Even After Rout – BofA

“Equities have been particularly complacent about the changed macro environment and policy setup, where the Fed fighting inflation through financial conditions means risk asset rallies both force and allow them to hike more aggressively… we believe there is still plenty of room for equity vol to catch up with levels of stress in other asset classes.” 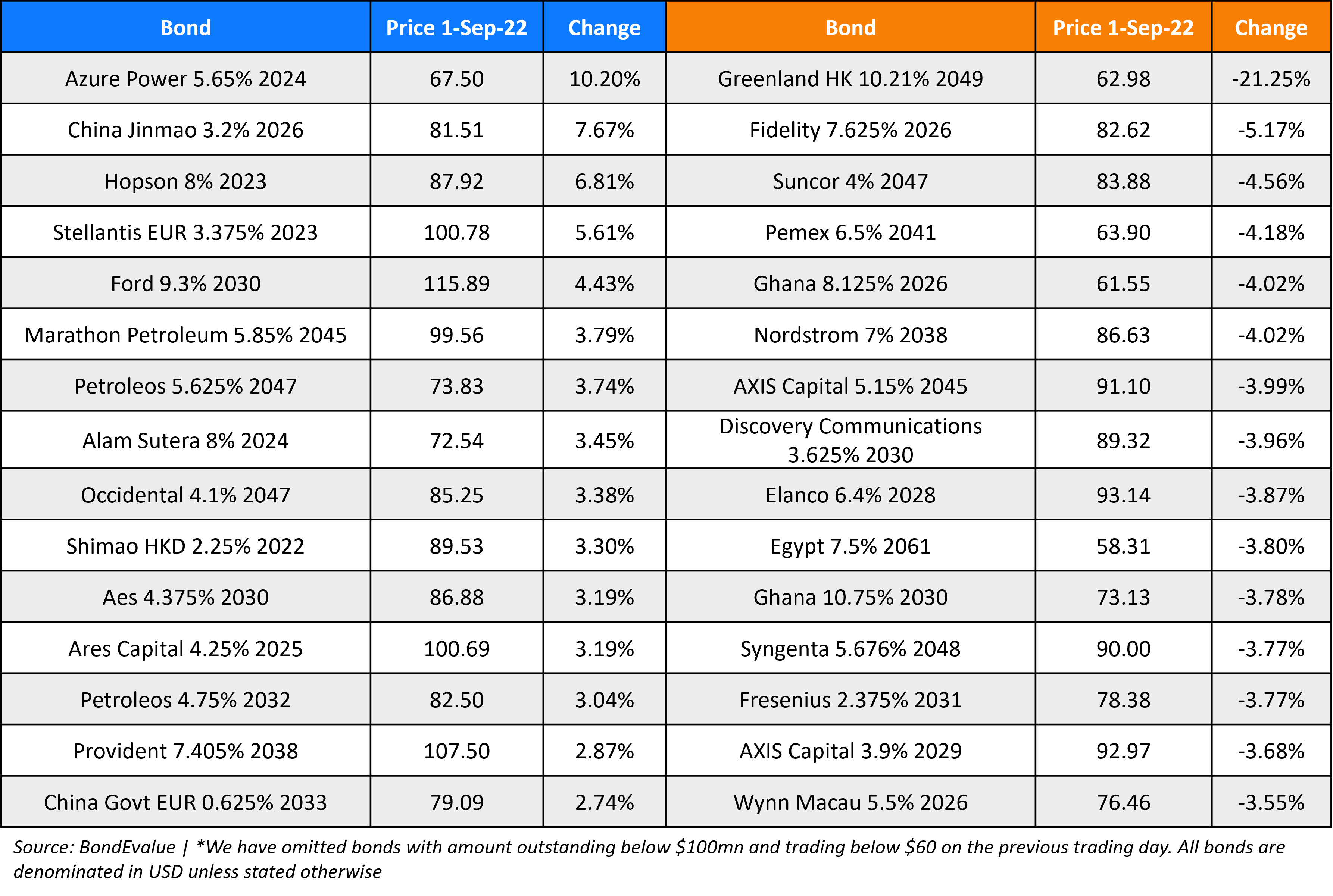