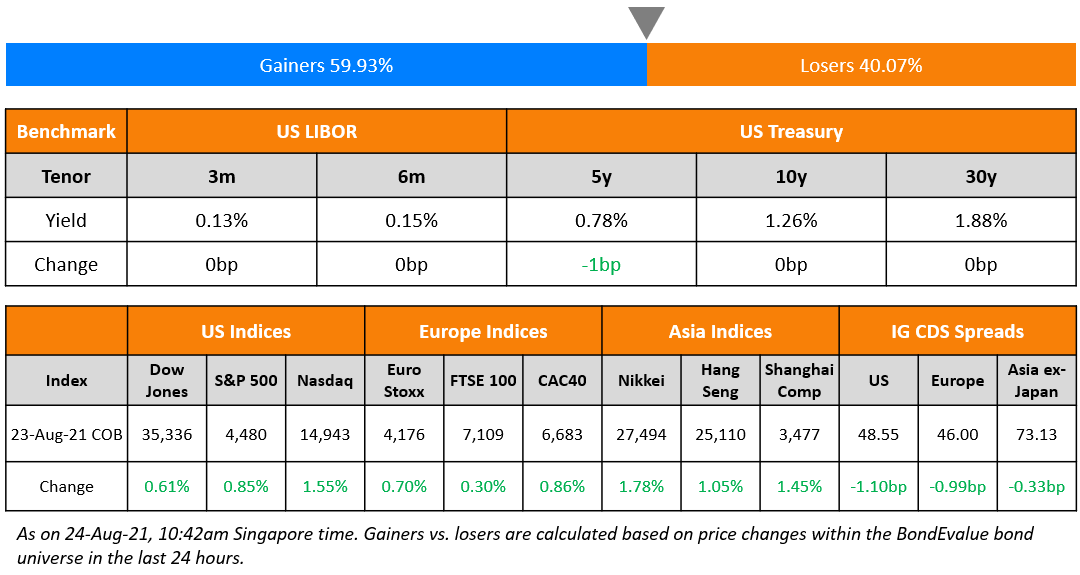 US markets extended Friday’s gains to an all time high coming off a losing week – S&P and Nasdaq gained 0.9% and 1.6%. Energy, up 3.8% led the gains and was followed by Consumer Discretionary and IT up 1.4% and 1.3% respectively. Utilities, down 1.3% dragged the markets lower. Mirroring the US, European bourses also inched up – the CAC was up 0.9% while FTSE and DAX were up 0.3% each. UAE’s ADX gained 0.1% while Saudi’s TASI lost 0.1%. Brazil’s Bovespa reversed its gains to end 0.5% lower. Asian markets took cues from the US and European markets and opened in the green  – HSI and Nikkei were up more than 1% while Singapore’s STI and Shanghai are up 0.3% and 0.6%. US 10Y Treasury yields were flat at 1.26%. US IG tightened by 1.1bp while the HY CDS spreads tightened 7.6bp. EU Main and Crossover CDS spreads tightened 1bp and 4.3bp respectively. Asia ex-Japan CDS spreads were 0.3bp tighter.

Navigating The Bond Markets by Leveraging the BEV App | Aug 25

New to the BondEvalue App? We will be conducting a complimentary session on Navigating The Bond Markets by Leveraging the BEV App on August 25, 2021. This session is aimed at helping bond investors in tracking their investments using the BondEvalue App. Click on the banner below to register.

AIMS APAC REIT raised S$250mn via a perpNC5 at a yield of 5.375%, 12.5bp inside the initial guidance of 5.5% area. The bonds are unrated and received orders over S$450mn, 1.8x issue size. Proceeds will be used for general corporate needs, including working capital, capital expenditure and investments, as well as for full or partial debt refinancing. The bond will be issued by HSBC Institutional Trust Services Singapore in its capacity as the REIT’s trustee and will be drawn from a S$750m ($551.4mn) multi-currency debt issuance programme. The coupon is deferrable and non-cumulative. If not called, the coupon will reset at the end of year five and every five years thereafter to the prevailing Singapore dollar SORA OIS plus the initial credit spread. Private banks will receive a 25-cent concession. The new bonds are priced 63.5bp wider to its existing 5.65% SGD perps that are callable in August 2025 that are currently yielding 4.74%.As per IFR, this is one of the highest coupons paid on SGD perps issued this year, matching Olam’s 5.375% perpNC5.5 issued in January and behind ESR Cayman’s $200mn 5.65% perpNC5 issued in February.New Bonds Pipeline

$650bn of SDR came into effect on Monday, which is the largest allocation of SDR in history.

“But today we have come to a very critical level,” Wijewardene said. “With IMF or without IMF we cannot continue with this loose monetary policy anymore and we cannot maintain this low interest rate regime anymore.” “As a result the central bank has done what it should do in a situation like this. It has reversed its policy stance.” “Instead of claiming that it is going by this alternative policy, it is now going by its normal monetary policy where it has increased the policy interest rate and increase the statutory reserve ratio.” “This is actually the beginning of a long journey in order to maintain the macro-economy in Sri Lanka.” “Without going to the IMF there is no other solution.” MMT advocates claim “the printing of money has no relation to inflation or exchange rate depreciation,” Wijewardene explained. “And based on that the central bank had been printing new money on a massive scale and had been permitting commercial banks to lend to the government huge amounts of money.” he said.

On US bonds offsetting widespread losses in global markets – Mark Cabana at Bank of America
“We’re not expecting a big policy reveal at this meeting.” “I don’t think Powell wants to front run the [September policy] meeting, given the myriad of voices that are out there. I don’t think this is the time when Powell really wants to make a splash.”

“[PUFG] has sped through a restructuring, underscoring the Chinese government’s desire for efficient, market-based default resolutions . . . the deal’s speediness and the high recovery rate will increase market acceptance of court-led workouts.”
On liquidity risk lurking in high-grade credit – in a report by Hans Mikkelsen, credit strategist at Bank of America
“The liquidity risk in investment grade debt is high, especially for older bonds.” “Trading has more recently focused on more liquid issues, and the share of trading in previous bond issues remains below 2019 levels.”
On additional incentives for issuers needed for the proposed European Union standard for green bonds – Christopher Flensborg, head of sustainable finance at SEB AB
Complying “will make your work and your potential liability much larger,” Flensborg said. “They need to provide some kind of carrot to go the extra distance.” “If you don’t deliver, what’s going to happen?” “If you have to be 100% aligned to be an EU green bond, it will reduce the universe quite a bit,” Flensborg said. “You need to show alignment in the portfolio and you need to be 100% aligned in the bond, and that 100% alignment is a risk factor because that is pretty tough.”
On India to monetise $81 billion worth of state assets over the next 4 years – Amitabh Kant, chief executive of India government’s think tank NITI Aayog
“The strategic objective of the programme is to unlock the value of investments in brownfield public sector assets by tapping institutional and long-term patient capital which can thereafter be leveraged for further public investments.” 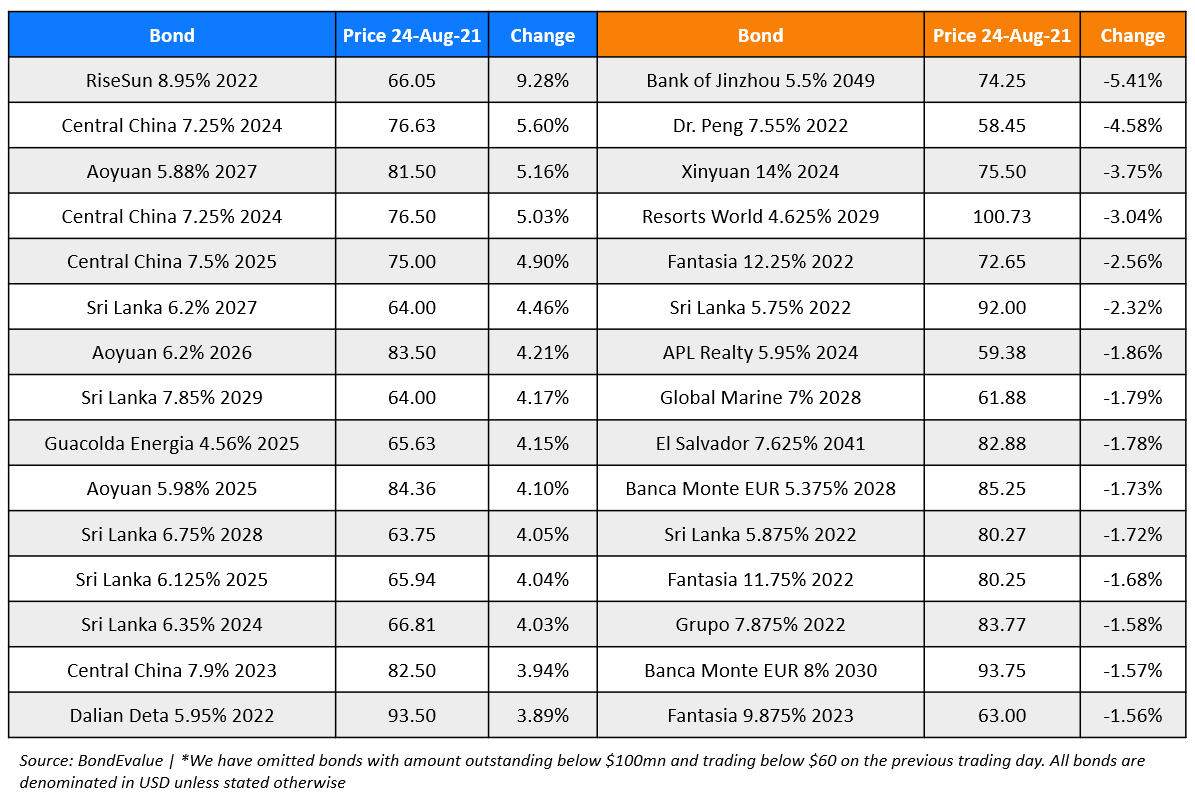