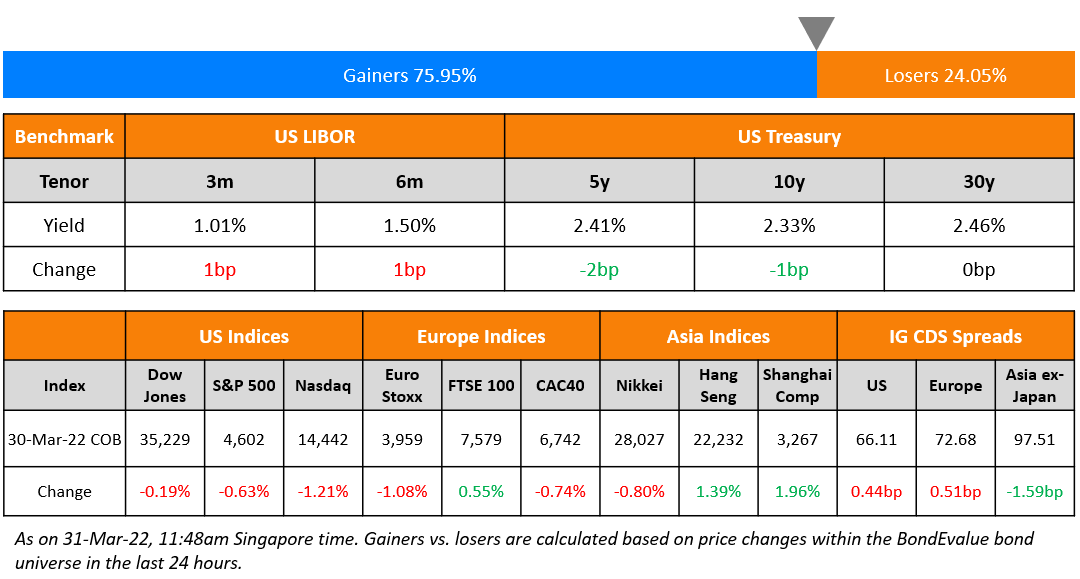 The People’s Bank of China said that it will step up the magnitude of monetary policy and make it more forward-looking, targeted and autonomous. Thus it indicated its intention to boost confidence and support the economy.

Today’s session will be a deep dive on new bond issues – terminologies, process, timeline, pricing and analysis. The session will also cover credit ratings – how to find and interpret them. The session is at 5pm Singapore / 1pm Dubai / 9am London. Sign up by clicking on the banner below: 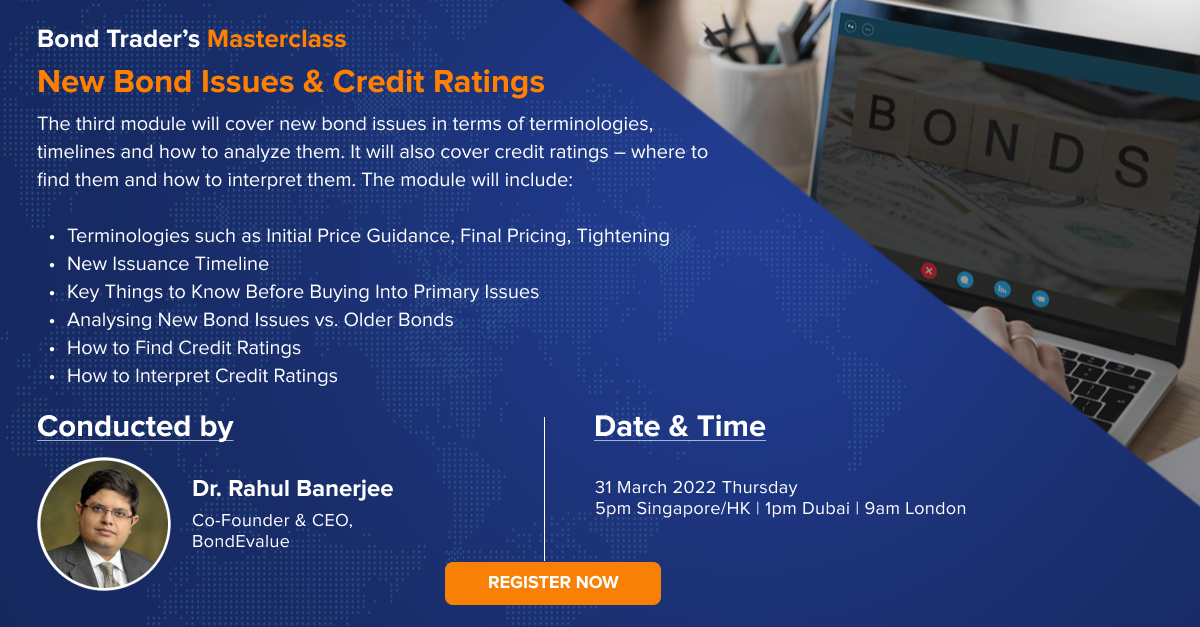 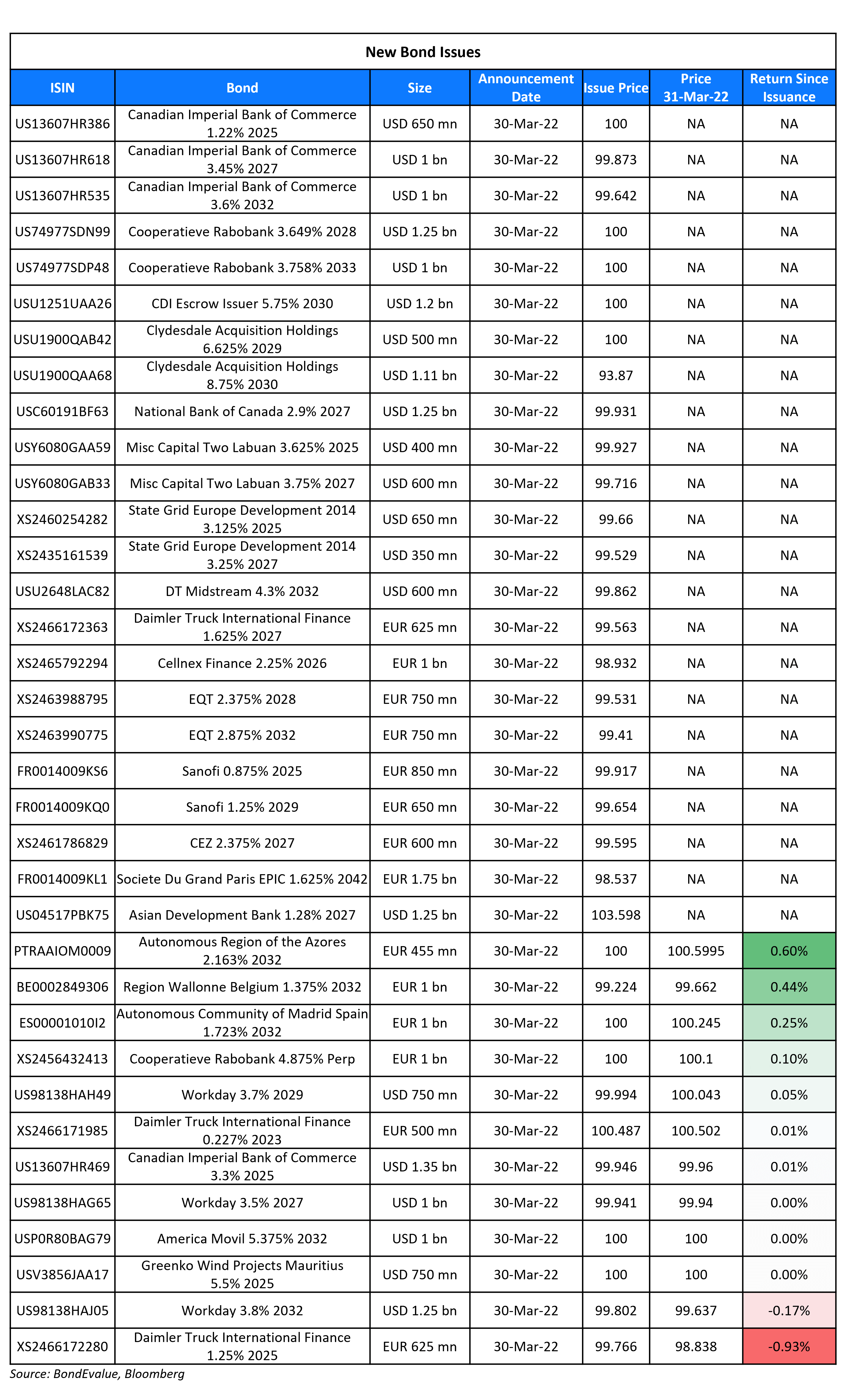 Greenko Wind Projects (Mauritius) raised $750mn via a 3Y bond at a yield of 5.5%, 30bp inside the initial guidance of 5.8% area. The bonds are rated Ba1/BB (Moody’s/Fitch) and received orders over $2bn, 2.7x issue size.  Asian investors were allocated 46% of the deal, the US 32% and EMEA 22%. Asset and fund managers took 90%, banks and private banks 5%, insurers and pension funds 4% and others 1%. Greenko Energy Holdings will provide a guarantee. The new bonds priced 39bp wider to related-entity Greenko Solar’s 5.55% bonds due January 2025 that are currently yielding 5.11%.

Singapore Post raised S$250mn via a PerpNC5.25 bond at a yield of 4.35%, 30bp inside initial guidance of 4.65% area. The bonds are rated BBB- and received orders over $850mn, 3.4x issue size.  About 54% went to private banks, 42% to insurers and fund managers and 4% to banks and corporations. The distribution rate for the notes will be reset every five years after the initial 5.25Y call date. The notes have a 25bp step-up initially, and an additional 75bp step-up from year 25.5. The proceeds will be used for general corporate purposes, including refinancing.

Rabobank raised €1bn via a PerpNC7.25 AT1 bond at a yield of 4.876%, 49.9bp inside initial guidance of 5.375% area. The bonds are rated Baa3/BBB (Moody’s/Fitch) and received orders over €3bn, 3x issue size. The coupon is fixed at 4.875% until the first reset date of December 29, 2029). If not called, it refixes every five years at 5Y MS+371.7bp, from an annual to a semi-annual rate. The bonds are callable from and including June 29, 2029 to and including the first reset date and each interest payment date thereafter. A trigger event occurs if the CET1 ratio of Rabobank Group has fallen below 7%; and/or Rabobank’s CET1 ratio has fallen below 5.125%.

Chinese state-owned utility State Grid International raised $1bn via a two-tranche deal. It raised $650mn via a 3Y bond at a yield of 3.245%, 45bp inside the initial guidance of T+120bp. It also raised $350mn via a 5Y green bond at a yield of 3.353%, 45bp inside initial guidance of T+135bp area. Wholly owned subsidiary State Grid Europe Development (2014) Public Co is the issuer with a guarantee from the parent. The bonds have expected ratings of A1/A+/A+. Proceeds from the five-year tranche will be used to finance and/or refinance eligible assets under SGID’s green framework.

Asian Development Bank (ADB) raised $1.25bn via a 5Y FRN bond, 1bp inside the initial guidance of SOFR+29bp area. The bonds have expected ratings of Aaa/AAA.

Duration or Macaulay Duration for a fixed income security is the weighted average time until repayment of the invested amount. Duration is measured in years and for coupon-bearing vanilla fixed-rate bonds, duration is less than the tenor of the bond. The higher the duration, the higher will be the change in a bond’s price for a given change in interest rates. Given duration’s weightage to coupon payments, it is a more-accurate measure of interest rate risk vs. the tenor of the bond. Higher the bond’s coupon, lower will be its duration; and higher the tenor, greater will be the bond’s duration, all else equal. For very long tenor bonds like century (100Y) bonds or very high coupon bonds, the duration is significantly less than the years to maturity. On the other hand, zero coupon bonds’ duration is equal to its tenor.

Recognizing risks to the outlook “is not an argument for stalling the removal of accommodation, but it does suggest a steady, deliberate approach for the path of policy could provide space to monitor developments as they unfold. It is clear that removing accommodation is required. How much and how aggressively accommodation should be removed is far more uncertain… Given the state of the economy, with inflation at a 40-year high and the unemployment rate near record lows, moving expeditiously to a neutral stance of policy is appropriate”

“I’m open to it. I think the question — and we will make this decision when we get to the meeting in May — is how strong does the economy still look in terms of its ability to take rate increases and how high is inflation persisting. I’m looking at both of those and we’ll make our call in May.”

“Duration bites right now and there is no better example than this bond. This is not a meme stock and not a high flying tech stock but a sovereign bond with an AA+ credit rating. The problem is the duration is so long and thanks to the enticement of the ECB at the time, the coupon is just 0.85% 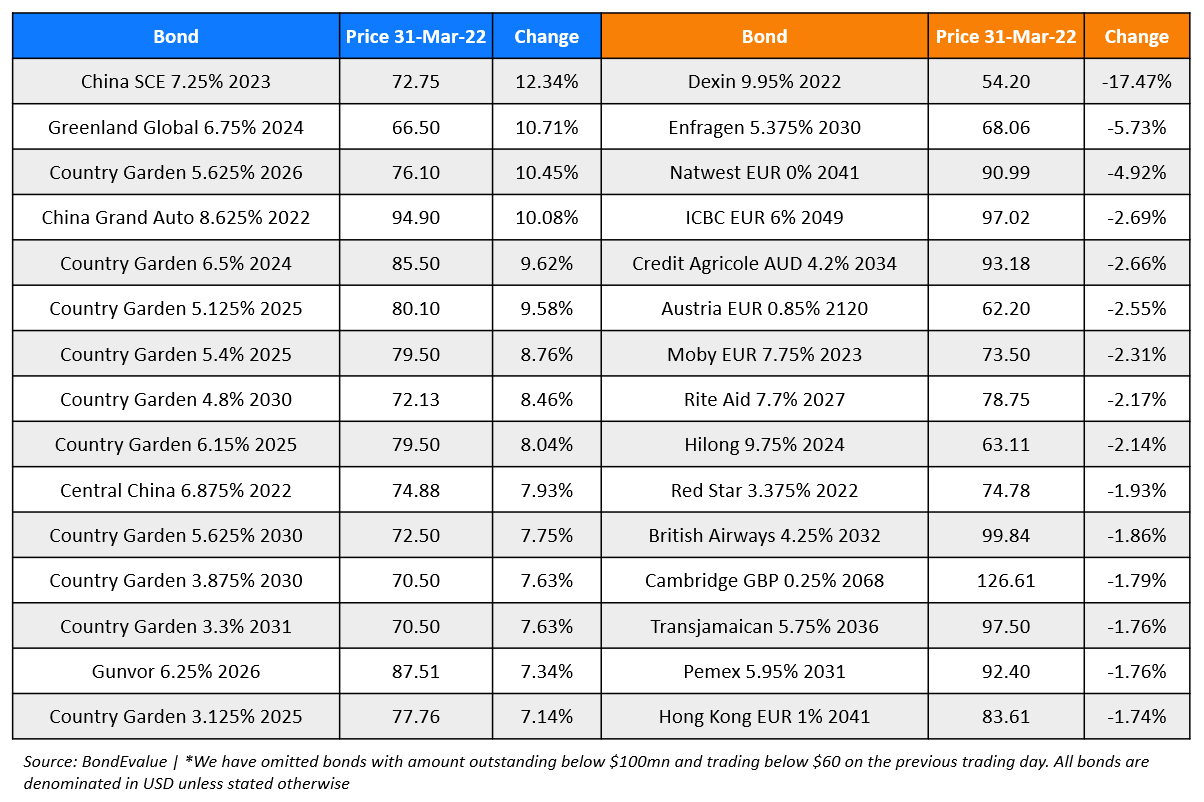