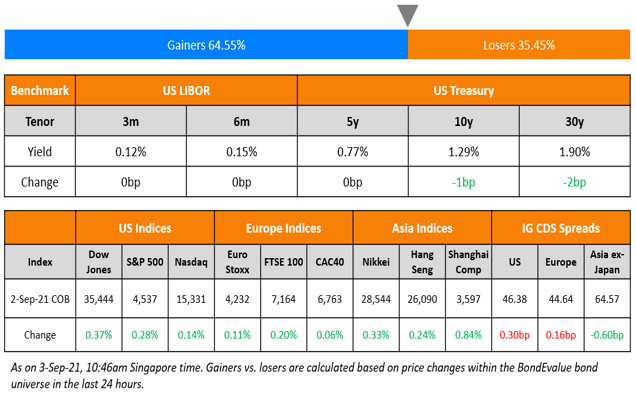 US markets continued with modest gains on the second day of September – S&P and Nasdaq gained 0.3% and 0.1% respectively. Energy up 2.5% reversed its losses to lead the gains, followed by Healthcare and Industrials, up more than 1%. Communication Services, down 0.7% dragged the markets lower. European markets also edged higher – FTSE was up 0.2% while DAX and CAC were up 0.1%. UAE’s ADX and Saudi’s TASI also trended higher by 0.1% each. Brazil’s Bovespa dropped 2.3% bucking the world market trend. Asian markets had a mixed start – Nikkei was up ~1.8% on the news that PM Suga would not be running for the upcoming election, HSI was down over 0.5%, Shanghai and Singapore’s STI were down ~0.2%. US 10Y Treasury yields fell another 1bp to 1.29%. US IG CDS spreads widened 0.3bp while HY spread tightened by 0.7bp. EU Main CDS and Crossover CDS spreads widened by 0.2bp and 0.7bp respectively. Asia ex-Japan CDS spreads tightened 0.6bp.

The Republic of Maldives raised $200mn via a tap of its 9.875% sukuk due 2026 at 97.755, ~3.45 points lower than the current price of 101.2 of its existing 2026s. At the reopening price of 97.755, the new tap yield 10.5%, 96bp over the 9.56% yield on the existing sukuk on the secondary market. The sukuk have expected ratings of Caa1 and received orders over $580mn, 2.9x issue size. The securities will be issued by Maldives Sukuk Issuance and guaranteed by the Ministry of Finance. EMEA took 62%, Asia 23%, and the US 15%. Fund/asset managers booked 67%, insurers, pension funds and SSAs 15%, bank treasuries 14%, and private banks and others 4%. The tap comes just weeks after Moody’s downgraded the sovereign’s long-term local and foreign currency issuer ratings to Caa1 from B3 on August 17, warning of a rise in its debt burden due to the coronavirus pandemic. Prior to that in November last year, Fitch lowered Maldives to CCC from B.

China Development Bank HK branch raised $500mn via a 3Y bond at a yield of 0.64%, 37bp inside the initial guidance of T+60bp area. The bonds have expected ratings of A1 and received orders over $3.5bn, 7x issue size. Proceeds will be used for financing and/or refinancing of eligible green projects.
The green bonds have received the Hong Kong Quality Assurance Agency Green and Sustainable Finance Certification (pre-issuance stage).The new bonds are priced 54bp tighter to its existing 0.625% 2024s that yield 0.54%. Asia Pacific investors bought 71% of the bonds and EMEA 29%. Banks received 63%, central banks and sovereign 28%, and fund managers and private banks 9%. CDB has achieved the tightest spread for new issues from China with this $500mn green offering, highlighting a trend of tightening spreads for high-quality Asian issuers, as per IFR. The reoffer spread was 2bp tighter than China’s dollar sovereign issue in October last year for the same tenor.

Contemporary Amperex Technology (CATL) raised $500mn via a 5Y bond at a yield of 1.616%, 40bp inside the initial guidance of T+125bp area. The bonds have expected ratings of Baa1 and received orders over $6.3bn, 12.6x issue size. Proceeds will be used for general corporate purposes, including refinancing offshore indebtedness, financing the purchase of raw materials and replenishing working capital. The bonds will be issued by wholly owned subsidiary Contemporary Ruiding Development and guaranteed by Shenzhen-listed parent company. The new bonds are priced 8.6bp wider to its existing 1.875% 2025s that currently yield 1.53%. Asia and EMEA received 91% and 9% respectively. Fund managers got 72%, Banks 20%, Insurance, Pension Funds and official institutes 7%, Private Bankers and Corporates 1%. CATL is a lithium battery supplier with a domestic market share of 50%.

Aozora Bank raised $300mn via a 3Y bond at a yield of T+67.5bp, 37.5bp inside the initial guidance of T+105bp area. The bonds have expected ratings of BBB+. Proceeds will be used for general corporate purposes and debt repayment. APAC and Europe received 94% and 6% respectively. Asset Managers and Hedge Funds got 56%, Banks and Financial Institutions 28%, Insurance 10%, Private Bankers and others 6%.

August was a mixed bag for bond investors with 47% of dollar bonds in our universe delivering a positive price return ex-coupon and 53% of the bonds ending the month in the red. This comes after June and July saw 54% and 52% of dollar bonds trading up in the months, respectively. While investment grade (IG) rated bonds outperformed in July, August saw 61% of IG dollar bonds ending the month in the red. High yield (HY) bonds outperformed with 57% of HY bonds trading higher in August. 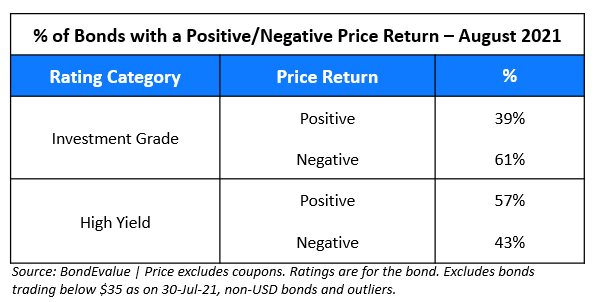 For the full report on price return of dollar bonds by credit rating, issuance volume, largest deals and top gainers/losers, click on the link below.

On August jobs report expected to show delta variant’s impact on US as Fed considers taper – in a note by Joseph Song and Stephen Juneau, Bank of America economists
“The softening in employment activity would be consistent with other economic data that have weakened since the surge in Covid case counts due to the delta variant.” “Our jobs forecast if realized is likely to be soft enough to leave the Fed wanting to monitor additional data before tapering,” the economists said.

On US companies gearing up for post-Labor Day borrowing boom – in a note by Hans Mikkelsen and team, Bank of America credit research

“We really recommended [investors] to stay sidelined for the time being.” “Those are the buzz words, and a lot of these targets are targets until 2035,” she said. “There’s reason to be cautious here.” “The best way to play China right now is actually plain vanilla in the bond market,” Chang said. “Chinese government bonds still have a very attractive yield relative to the rest of the world.”

On Zambia bonds rising after President tweeted that he would pay creditors – in a Twitter post by Hakainde Hichilema, Zambian President “Creditors to Zambia need not worry about our current financial position. We will arrive at an amicable and mutually beneficial solution to our debt. We will engage transparently and in good faith. As the youth of Zambia would say, ‘Bally will pay.'”

On the safest bond funds pushing junk holdings to record amid yield hunt – in a note by JPMorgan Chase & Co. analysts including Madhubala Sriram “Active investment continues to play a role.” There is a “willingness to warehouse fallen angel risk in their portfolios,” they said. 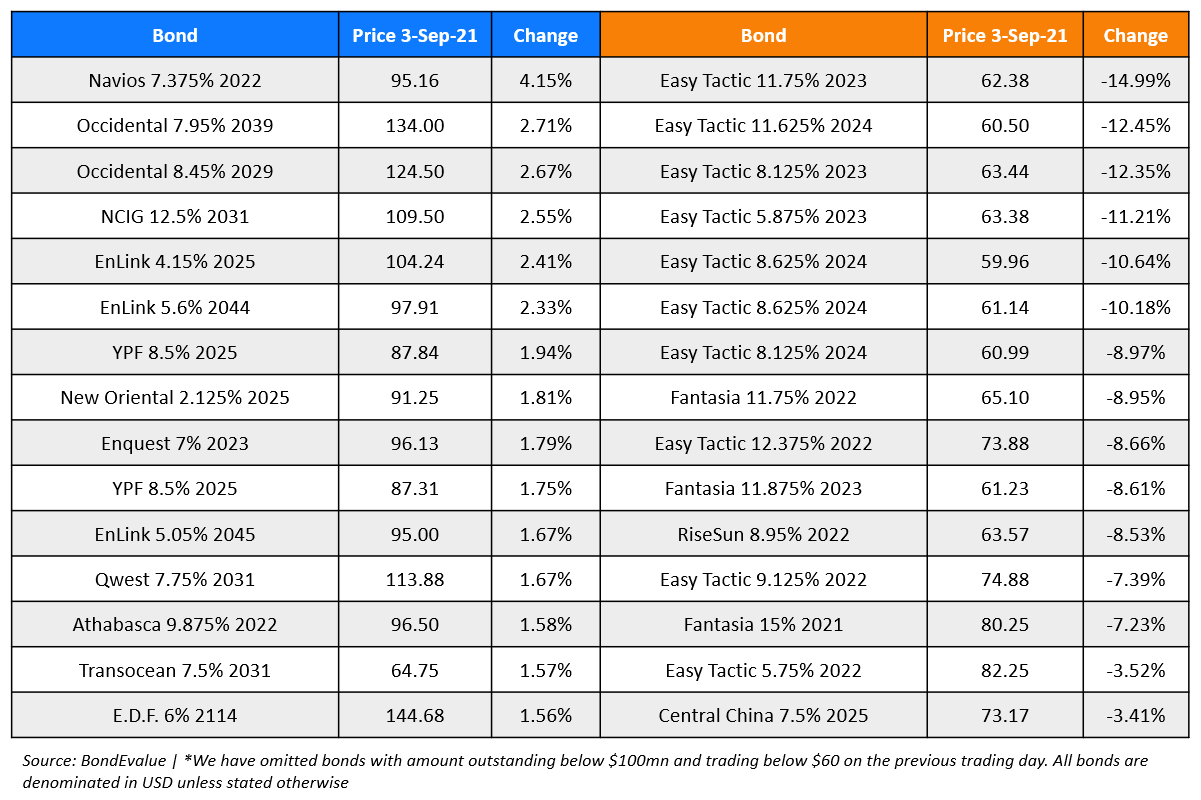