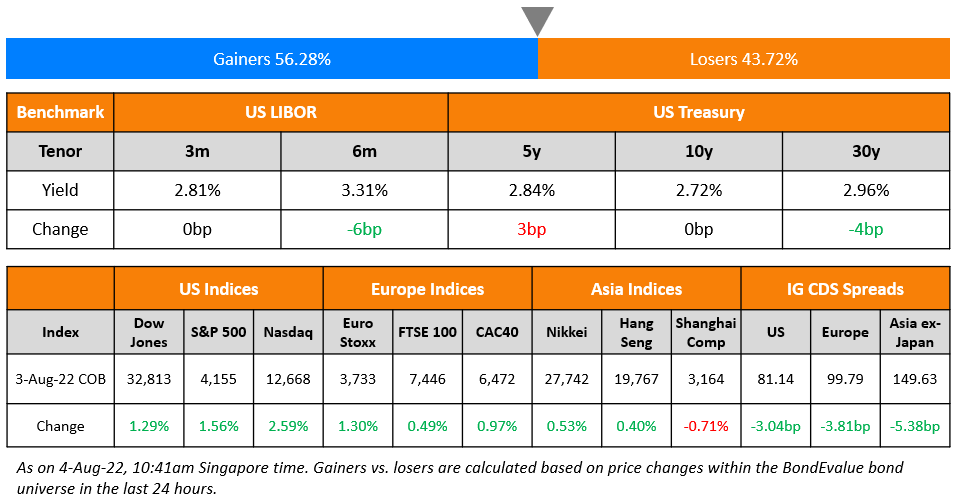 US equity markets ended higher on Wednesday with the S&P and Nasdaq up 1.6% and 2.6% respectively. Sectoral gains were led by Information Technology gaining 2.7%, followed by Consumer Discretionary climbing 2.5%, while Energy dipped 3%. US 10Y Treasury yields remained unchanged at 2.72%. European markets were also higher – DAX, CAC and FTSE were up 1%, 1% and 0.5% respectively. Brazil’s Bovespa was up by 1.1%. In the Middle East, UAE’s ADX and Saudi TASI fell 0.5% and 0.2% respectively. Asian markets have opened higher – STI, Shanghai, HSI and Nikkei were up 0.2%, 0.2%, 1.3% and 0.5% respectively. US IG CDS spreads tightened 3bp and US HY spreads were tighter by 14.2bp. EU Main CDS spreads were 4bp tighter and Crossover spreads were tightened by 21bp. Asia ex-Japan IG CDS spreads narrowed by 5.4bp.

In the US, ISM services PMI rose to 56.7 in July from 55.3 in June. ISM’s measure of new orders received by services business have gone up to 59.9 in July vs. 55.6 in June as a rise in exports was reported. Brazil’s central bank hiked the selic rate by 50bp to 13.75% and guided for a possible 25bp hike at its September meet. Since March 2021, interest rates in Brazil have risen by 11.75%. The central bank said that it will be giving more emphasis on early 2024 inflation forecast due to recent tax changes. 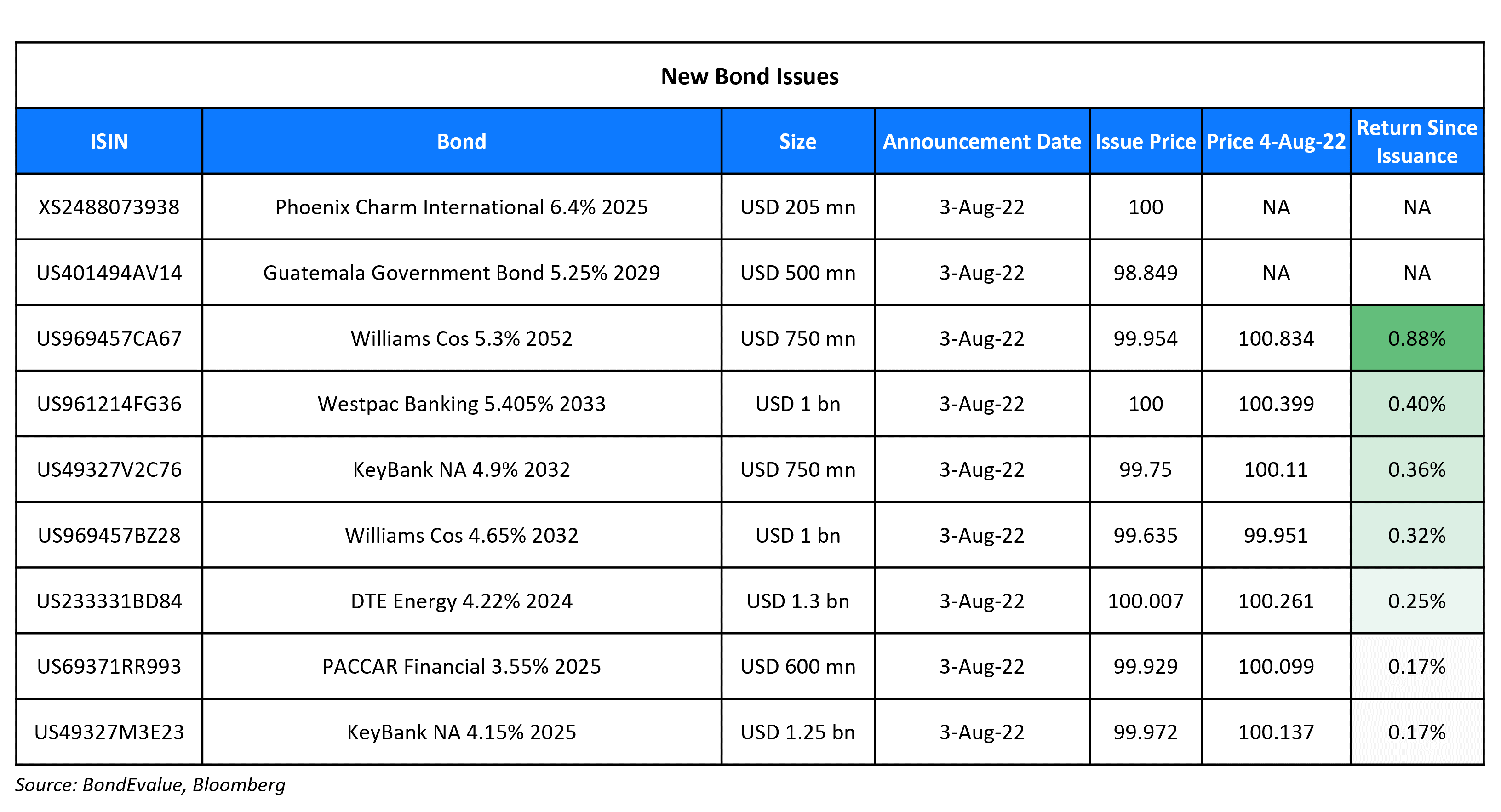 Danyang Investment Group raised $205mn via a 3Y bond at a yield of 6.4%, unchanged from its initial guidance. The bonds are unrated.

Suzhou City Construction raised $200mn via a 3Y bond at a yield of 6%, 20bp inside the initial guidance of 6.2% area. The bonds have expected ratings of BBB– (Fitch). Proceeds will be used to refinance offshore debt.

Bonds whose size is fixed and cannot be increased are called ‘Will Not Grow (WNG)’ or ‘No Grow’ bonds. Sometimes, issuers increase the final size of a deal to accommodate investor appetite. WNG bonds however have a fixed size and will not be increased. For example, green bonds often fall into this category as per the Climate Bonds Initiative (CBI). The CBI says that issuers need to show that there are enough green projects to match the amount that they intend to raise and for some, the number of suitable projects is limited. This according to them shows why green bonds tend to be smaller than vanilla bonds from the same issuer whereas for others there is more flexibility and the final size of the deal can be increased to accommodate investor appetite. Yesterday, Moody’s priced a $500mn issuance via a WNG 10Y bond at a yield of 4.301%.

On Fed Officials Signaling a 50bp Hike in Next Month

“I start from the idea that 50 (basis points) would be a reasonable thing to do in September because I believe I’m seeing evidence in my contact conversations, and in the observations of the world I see, that there are some bright spots for me… If we just see inflation roaring ahead undauntedly, the labor market showing no signs of slowing, then we’ll be in a different position where a 75-basis-point increase might be more appropriate. But I go in with the 50 in mind as I look at the data coming in.”

“Some financial markets are indicating they expect us to cut interest rates next year. I don’t want to say it’s impossible, but it seems like that’s a very unlikely scenario right now given what I know about the underlying inflation dynamics. The more likely scenario is we would continue raising (interest rates) and then we would sit there until we have a lot of confidence that inflation is well on its way back down to 2%,”

“Hawkish bets in EM Asia have been falling partially as a response to policy rates being overpriced on the way up, Global factors such as US rates rallying over the last few weeks has also played a major role.”

“The clear risk is a 50 basis-point hike… It is almost fully priced in, and with imported inflation, a weak currency is a factor that could tip the scales in favor of more forceful action.”

“Pressures have failed to recede after five consecutive 25-bp rate increases, which is why we think the MPC will agree on a larger hike at its August meeting. The BOE’s guidance also linked bigger rate moves to indications of more persistent inflationary pressures. The fact that services inflation, which tends to be stickier, continued to soar will add weight to a larger hike.”

On Argentina Hyperinflation Fears Being Overblown

“The hyperinflation fears are overblown, Nevertheless, we do have very high inflation… Whether the program is orthodox or unorthodox doesn’t matter as much, But it must be coherent, moving toward a single exchange rate… The worst case scenario is letting this unfold in a way in which you’re always running behind the circumstances”

On US Trimming Quarterly Debt Sales, with Further Plans to Make Bigger Cuts to 20 Year Bond

“Treasury believes these reductions announced today leave Treasury well-positioned to address potential changes to the fiscal outlook… Depending on future developments in projected borrowing needs, Treasury will consider whether adjustments in future quarters may be appropriate…We introduced the 20-year a little over two years ago to provide significant additional financing capacity… At the time, the size was larger than the market had originally expected. We’ve gotten some feedback that the supply-demand balance… we are at just about half the size we were last summer” 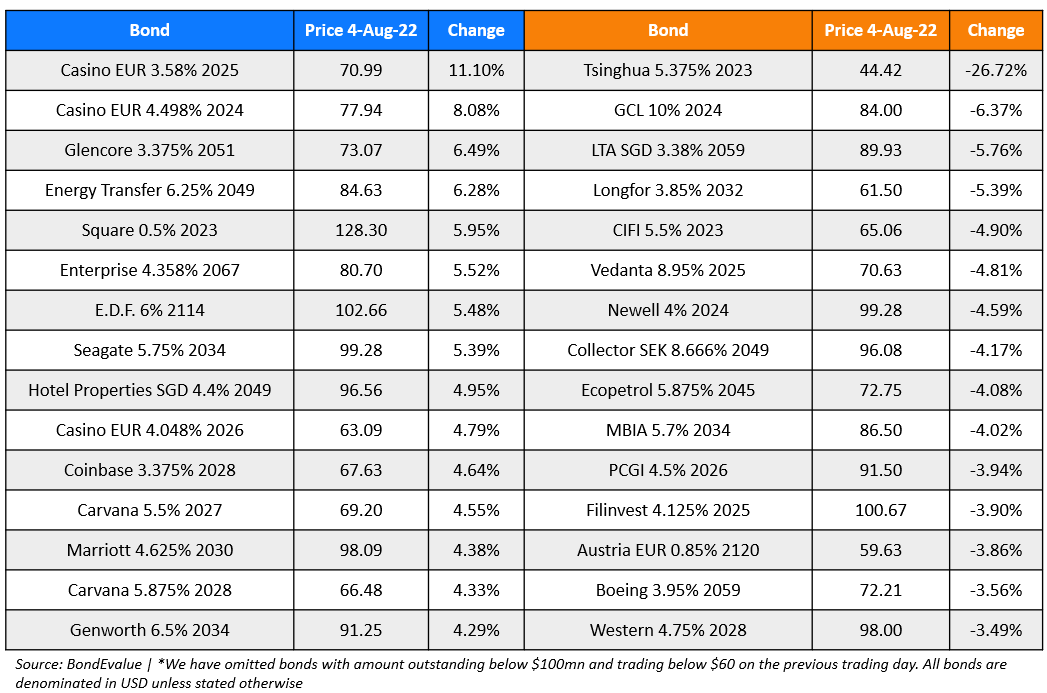