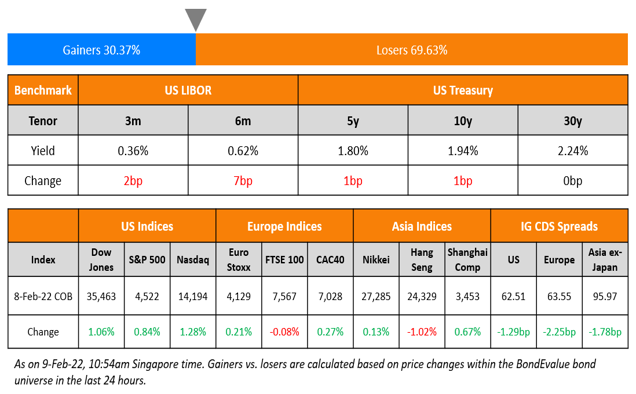 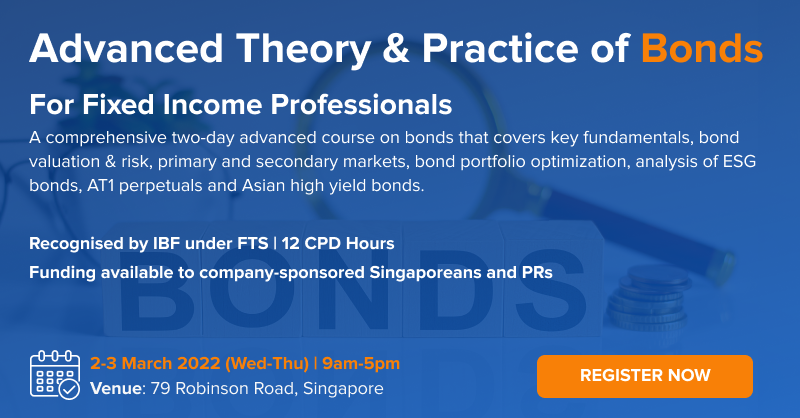 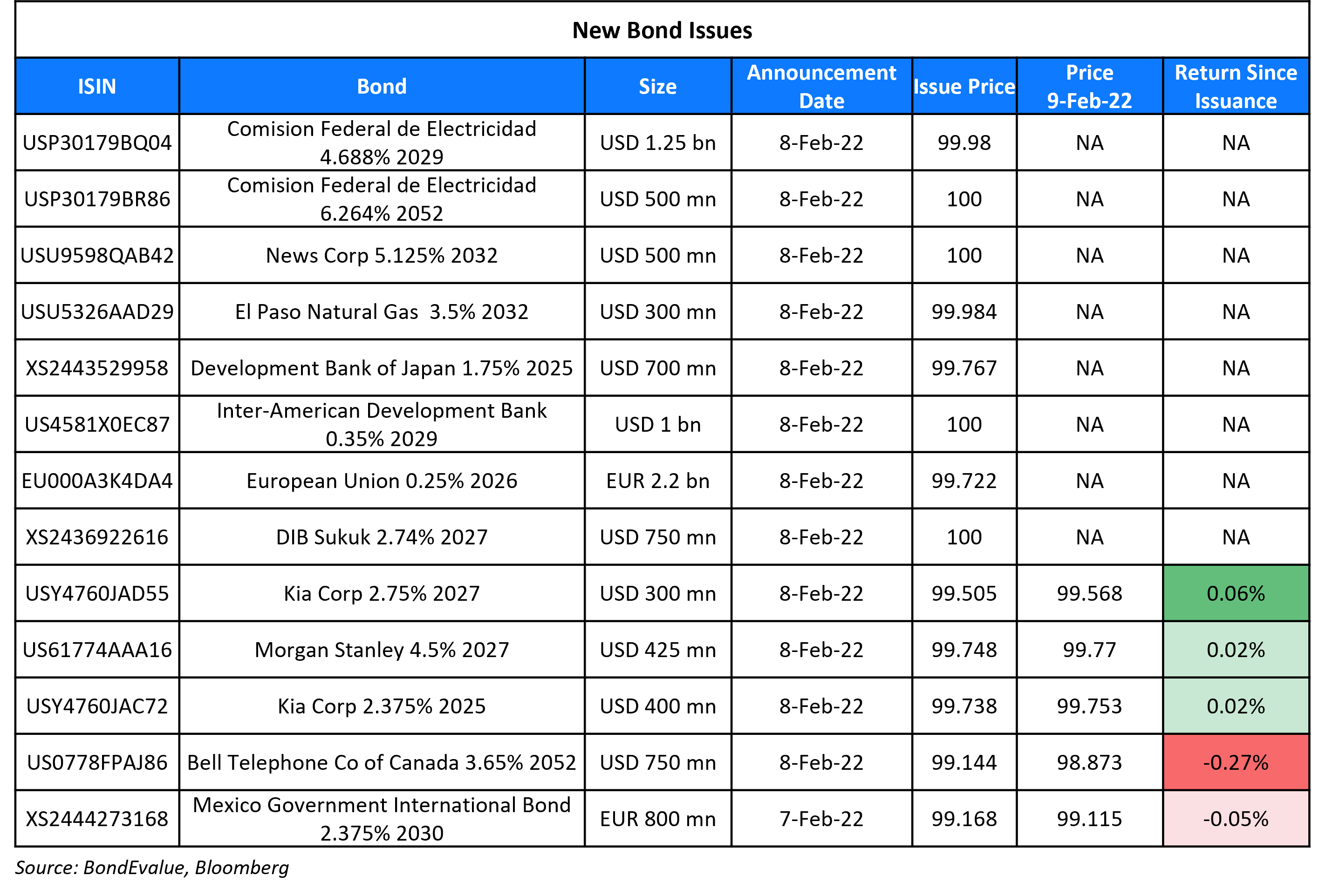 Mexico raised €800mn via a 8Y bond at a yield of 2.491%, 5bp inside the initial guidance of MS+190bp. The bonds have expected ratings of Baa1/BBB/BBB-. Proceeds will be used to redeem Mexico’s outstanding EUR 1.625% 2024 notes in full and for general purposes of the Government of Mexico.

Kia Corp raised $700mn via a two-tranche deal. It raised:

The bonds have expected ratings of Baa1/BBB+ (Moody’s/S&P). Proceeds will be used to finance or refinance, in whole or in part, new and/or existing eligible green project categories (as further described in Kia’s Green Finance Framework dated March 2021).

Mexican utility Comision Federal de Electricidad (CFE) raised $1.75bn via a two-tranche sustainability issuance. It raised $1.25bn via a long 7Y bond at a yield of 4.688%, 25bp inside initial guidance of T+300bp area. It also raised $500mn via a 30Y bond at a yield of 6.264% or T+400bp, inside guidance of T+ low 400s. The bonds have expected ratings of Baa1/BBB. An amount equal to the net proceeds is expected to finance/refinance in whole or in part new or existing Eligible Green Projects or Eligible Social Projects pursuant to the Sustainable Financing Framework.

The European Union raised €2.2bn via a  bond at a yield of 0.31%, 2bp below the initial guidance of MS-21bp. The bonds have expected ratings of Aaa/AA/AAA, and received orders over €19bn, 8.6x issue size. Proceeds will be used for the European Financial Stabilisation Mechanism (EFSM) programme.

On Sri Lanka on the brink of sovereign bond default, warn investors

“They are demonstrating an amazing willingness to pay. But why they would want to, I’m a bit flabbergasted. They are bankrupt, pretty much.”

“At these levels, a restructuring over the next 12 months should be the base-case scenario. I find it difficult to see them muddling through this year.”

The stock-market selloff has “spilled over to corporate bonds… It is changing the perception — and narrative — that corporate debt has been ‘stable’ in the wake of volatile equities.”

“Credit markets are in an especially interesting situation today as valuation has cheapened materially in both spread and yield terms, but the potential for higher yields and more mark-to-market losses remains high”

“Even though the loans are secured, you would expect to see more selling pressure, much more in line with high yield. You can see the same thing if you look at CCC credits, which would normally underperform in times of credit stress, but haven’t been doing poorly.”

“We are seeing the trend of China property turmoil continuing to dampen enthusiasm for some high-yield issuance… If we were to carve out the refinancing needs for those issuers that have already defaulted, that probably carves out about $15 billion out of that $35 billion… We need to have some of these companies be able to access the U.S. dollar bond market, restore some of their liquidity and again see some stabilization in that property sector” 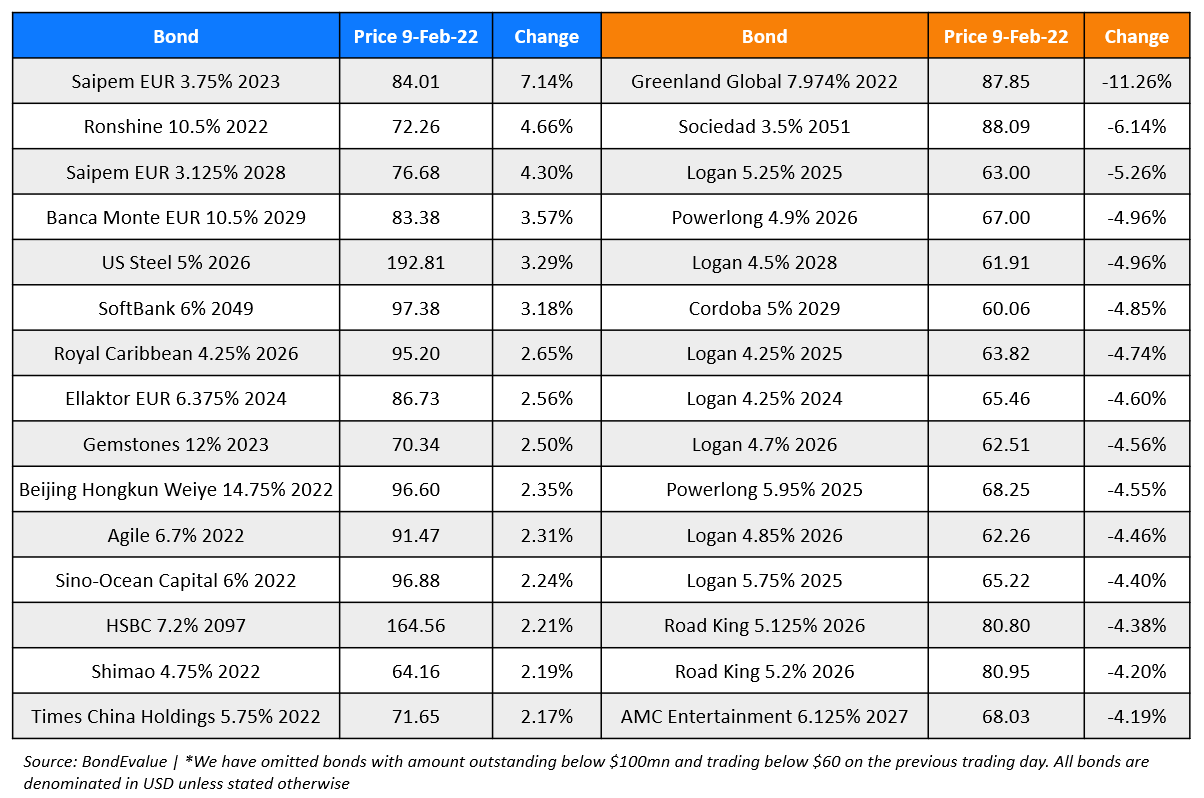