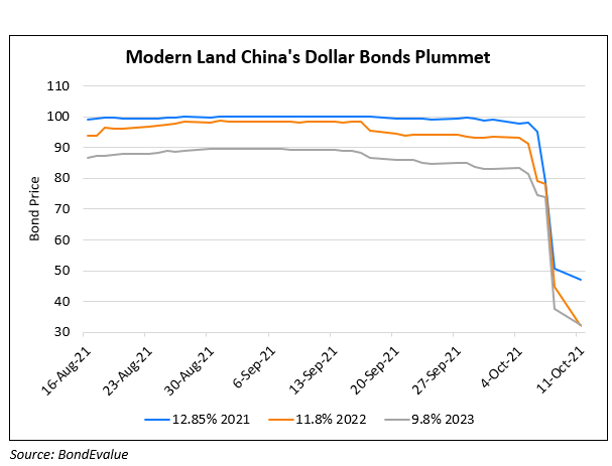 Modern Land China’s dollar bonds collapsed, losing over half its value with its 9.8% 2023s, 11.8% 2022s and 12.85% 2021s falling to 32.5, 32.1 and 47 cents on the dollar respectively. Modern Land in an exchange filing sought consent to extend the maturity date of its $250mn 12.85% bonds due October 25 by three months, until January 25, 2022 to avoid potential default. Besides, Modern Land is also asking bondholders to allow it to redeem part of the bonds to reduce the outstanding amount to $87.5mn on October 25. It is also asking them to allow it to optionally redeem the notes, in whole or in part (at par plus accrued and unpaid interest) at any time on and after October 25 and to shorten the redemption notice period from 30–60 days to 7–30 days. In return, they are offering a consent fee of $1 for each $1,000 in principal to all holders of the notes if at least 90% of the overall principal validly deliver consents for the amendments on or before October 20.

In another separate exchange filing Modern Land said that Mr. Zhang Lei, the Chairman, an Executive Director and a controlling shareholder, and Mr. Zhang Peng, the company President and Executive Director, communicated that intend to provide the developer with shareholder loans of ~RMB 800mn ($124mn). The loans are to support the company and is expected to be completed within the next two to three months. The Chairman added that he would “consider giving continuous support in due course depending on the Group’s financial situation”, demonstrating his commitment and unwavering confidence in their businesses and development.