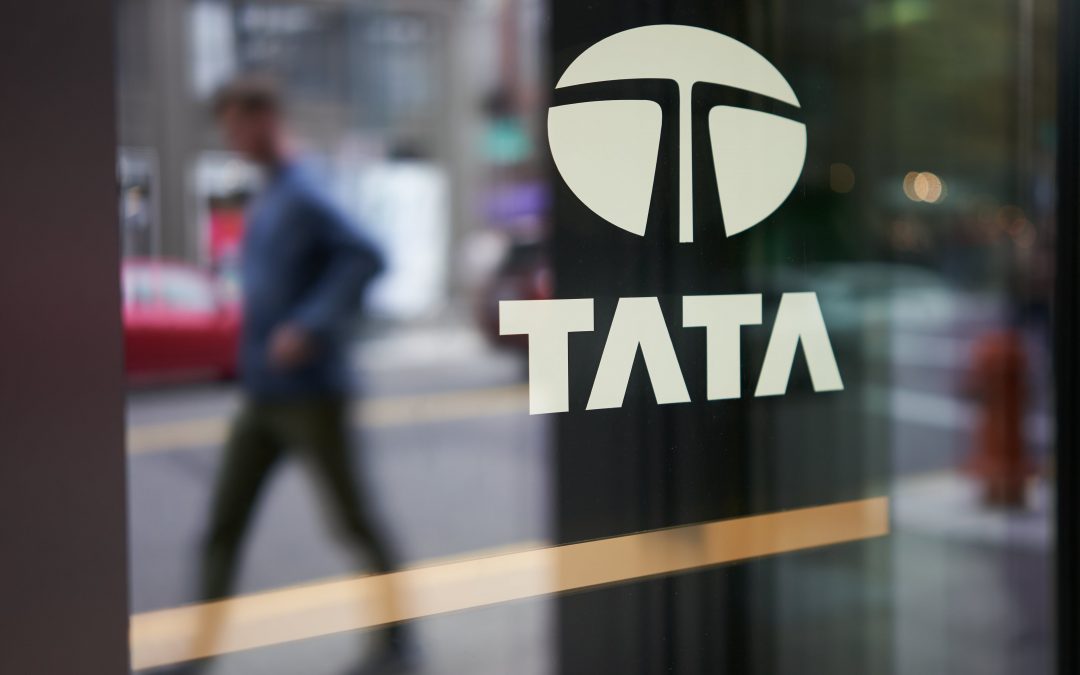 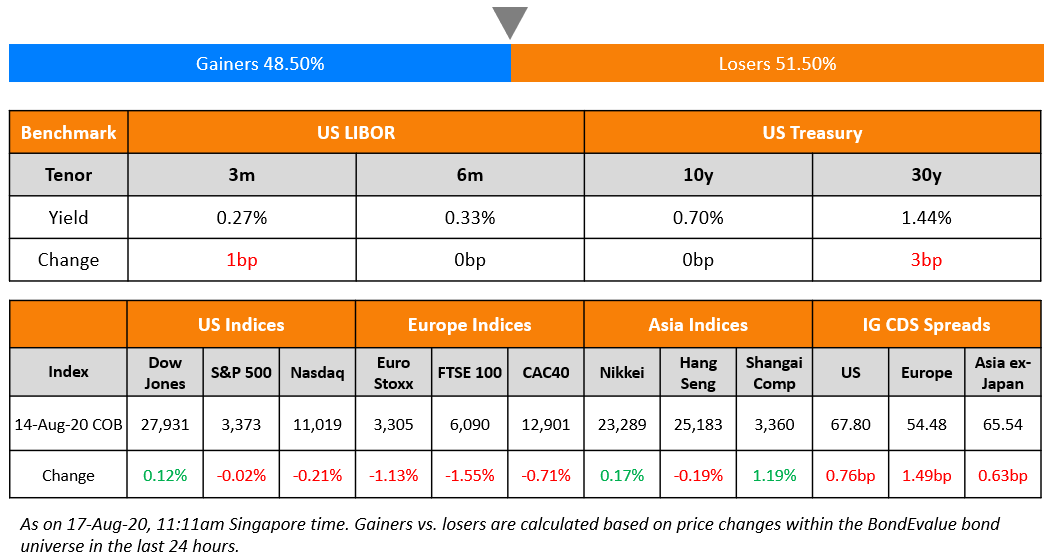 Markets seem to lack any impetus this morning with a flat close on Wall Street on Friday and little news over the weekend. US retail sales rose 1.2% last month, but soft Chinese retail sales and industrial output numbers weakened sentiment. US-China tensions are also on the rise as a planned review of the trade deal was postponed. The US Treasury curve steepened on Friday which saw $112bn of supply. CDS spreads widened a tad across the board. Asian primary markets have opened on a strong footing with a flurry of new USD and SGD bonds launched this morning. 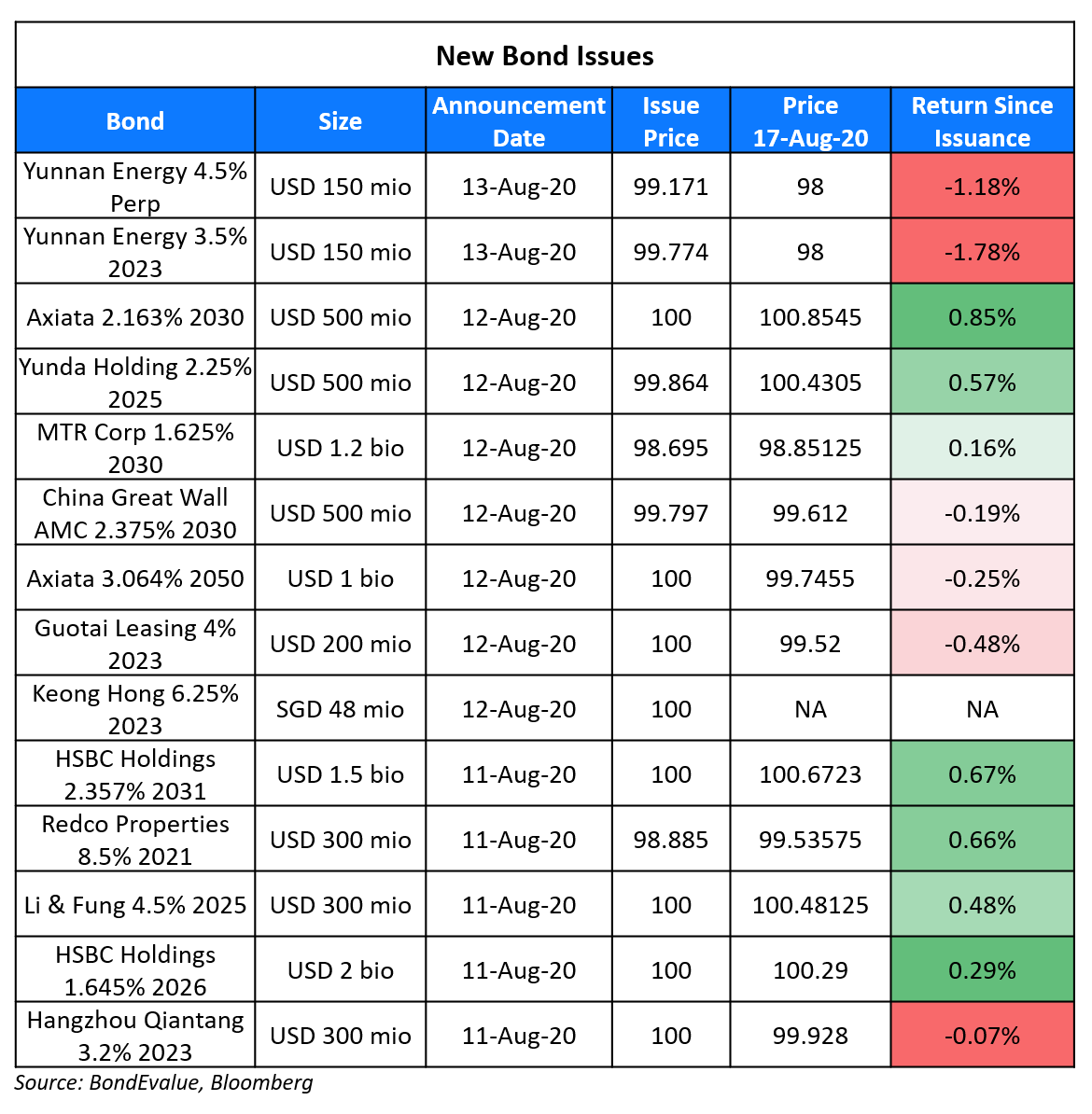 The bonds also have a call option after two years wherein the issuer can redeem the bonds:

Proceeds from the issuance will partly be used towards taking the India-listed Vedanta Ltd. private and the remainder to fund a tender offer or redemption of the parent guarantor’s dollar bonds due 2021. As reported by us last week, the new bonds are expected to be rated B3 and B by Moody’s and S&P respectively.

Jaguar Land Rover and Tata Steel failed to negotiate a government bailout from the UK government emergency financing scheme called ‘Project Birch’, which caters to companies strapped for cash yet not qualifying for the UK government’s main coronavirus funding schemes. The scheme is applicable to companies that have exhausted all other options including raising capital from existing investors. JLR, UK’s biggest carmaker and Tata Steel, both owned by India’s Tata Group, have been reeling under increased stress ever since the onset of the pandemic. JLR and Tata Steel provide employment to 30,000 and 8,000 employees in the UK respectively. JLR has lost ~ £1bn in the first half of 2020 and has been excluded from the Bank of England’s support scheme due to its poor credit rating. Tata Steel has been under stress for a long time as it has failed to breakeven even after a decade of its presence in the country. The pandemic led slowdown has only added to Tata Steel’s woes.

The Treasury had concluded that Tata Group did not qualify under the program as it had other options to secure funding as JLR’s Chinese subsidiary had raised £560mn from a group of Chinese banks. This leaves both the companies with the following options in the UK:

Tata Motors was downgraded by S&P to BB from BB+ with a stable outlook on July 26, while JLR was downgraded by Fitch to B with a negative outlook earlier in May. Tata Steel is rated B+ and Ba2 by S&P and Moody’s respectively with a negative outlook by both agencies. JLR’s bonds were in the red after seeing an upward rally in the past few weeks. Its 5.625% bonds due 2023 were trading at 96.5 cents on the dollar, down 1.49 points while its 2.2% Euro bonds due 2024 traded at 85.6 cents on the Euro, down 1.23 points since Friday’s close. Tata Steel’s dollar bonds, issued by Abja Investment Co. traded largely unchanged on the secondary markets.

Belarus‘ dollar bonds have fallen ever since the disputed elections on August 9, which saw the incumbent President, Alexander Lukashenko return to power for a sixth term with 80% of the votes. The election results led to widespread protests in the country on allegations of rigging, which were followed by a government retaliation of a crackdown on protesters. Protests were sparked immediately after the exit polls that predicted a convincing win for Lukashenko as Svetlana Tikhanovskaya, the chief opponent rejected the results and accused the government of rigging. She said at a news conference,  “The authorities should think about how to peacefully hand over power to us,” while adding, “I consider myself the winner of this election.” Belarus’ dollar bonds fell to their lowest since May amid the protests and possible sanctions by Europe after the German foreign minister revealed that sanctions would be imposed on the officials involved in the crackdown on the protesters. “The risk of sanctions is something we as bond investors have to be vigilant about,” said Sergey Dergachev, a portfolio manager at German asset manager Union Investment while adding “There’s a big question mark over how this situation will be resolved, and there’s likely to be more downside for the bonds until it is”. 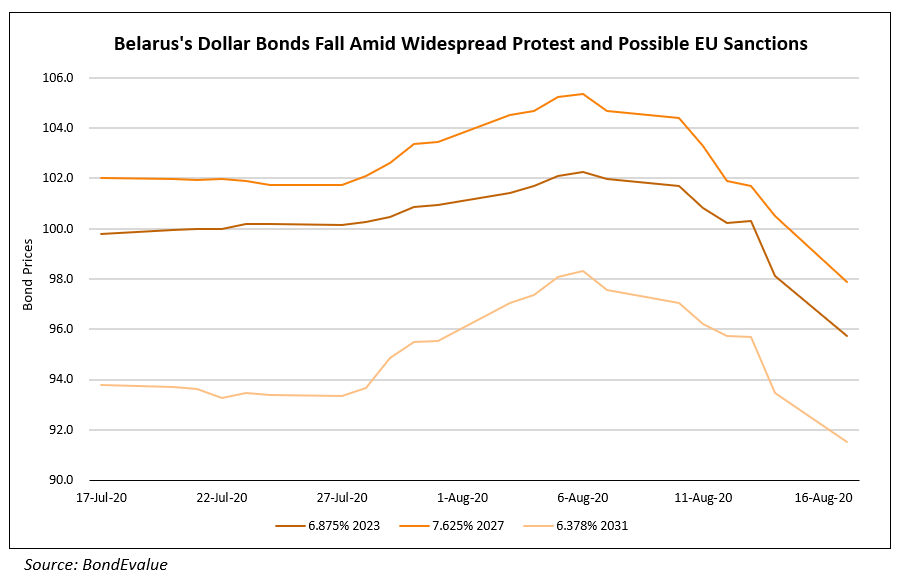 Amortizing bonds are debt instruments that pay both coupons and principal through the life of the bond. Unlike straight bonds that pay back the principal as a bullet payment at maturity, amortizing bonds pay back principal at regular intervals based on a predefined schedule prior to the maturity date. Amortizing structures are common in loans and mortgages, not in bonds.

“To date, I think many of the state governments have been concerned about [spending more] because they want to preserve their low levels of debt on credit ratings,” Lowe said. “What’s important is that we use the public balance sheet in a time of crisis to create jobs for people. Creating jobs for people is much more important than preserving credit ratings,” he said. “Going forward, the challenge we face is to create jobs, and the state governments do control many of the levers here,” he said.

“Economic activity in the UK is not falling like a stone. In fact, it has now been rising for more than three months, sooner than anyone expected,” Haldane wrote. “While that leaves activity well below pre-Covid levels, the UK has already recovered perhaps half of its losses.”

On the resilience of the emerging market rally

Ehsan Khoman, the head of Middle Eastern research at MUFG Bank in Dubai

“Markets will begin to price more caution given the upcoming volatile U.S. election, and particularly if U.S.-China animosities do not ebb away,” said Khoman.

“The sharp rally in risk markets leaves less obvious upside,” Zezas wrote in a note. “Another round of stimulus is the difference between ensuring that the economic recovery continues uninterrupted and a meaningful short-term pullback in growth. It may also be the difference between a confident six- to 12-month view on a variety of risk assets and a meaningful near-term correction.”

In a note by Commerzbank analysts

“The Bund sell-off is assuming a dynamic on its own, triggering bearish spread widening. These phases caused by lopsided positioning adjustments have happened before and were always temporary,” Commerzbank analysts said.

“One key feature of the markets in recent months has been that despite low and stable 10 year nominal bond yields, a dramatically divergent move has occurred beneath the surface with real yields plunging to record lows and inflation expectations surging,” wrote Edwards.

On China’s speedy recovery from the Covid-19 slump

“China’s recovery is largely on track,” said Wu. “Investment plays a bigger role, where as in the rest of the world fiscal policy support is mainly on the employment and the smaller enterprise front. This explains why China’s economy can gather pace quicker and gain a firmer footing at a relatively earlier stage of the recovery.”

“Chinese consumers seem to be taking a longer time to come back to normal spending compared to their counterparts in the U.S. and Europe,” said Qiao. With the virus under control, “consumers should benefit from a safer public health environment,” Qiao said.

“China’s outlook faces considerable uncertainty from both domestic and external demands. Friday’s weaker-than-expected data has increased the odds of a rate cut by the People’s Bank of China in the coming months, even though the central bank has lately sent signals on policy normalization.” 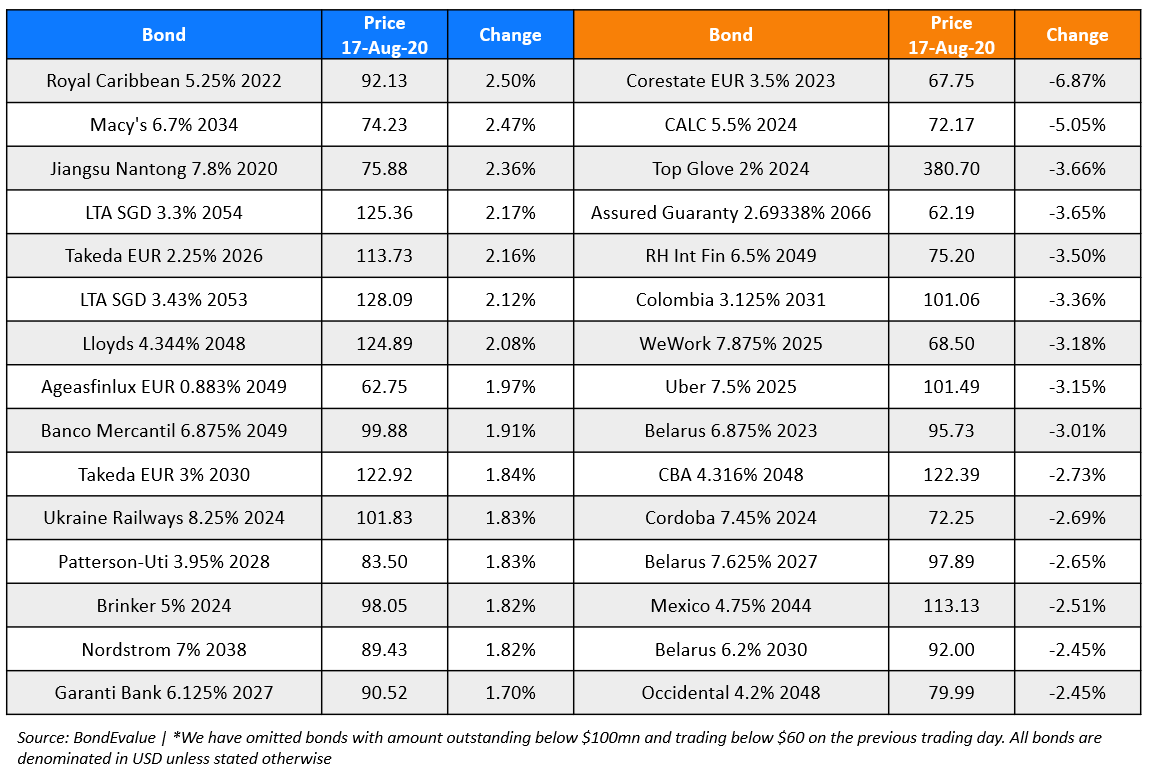