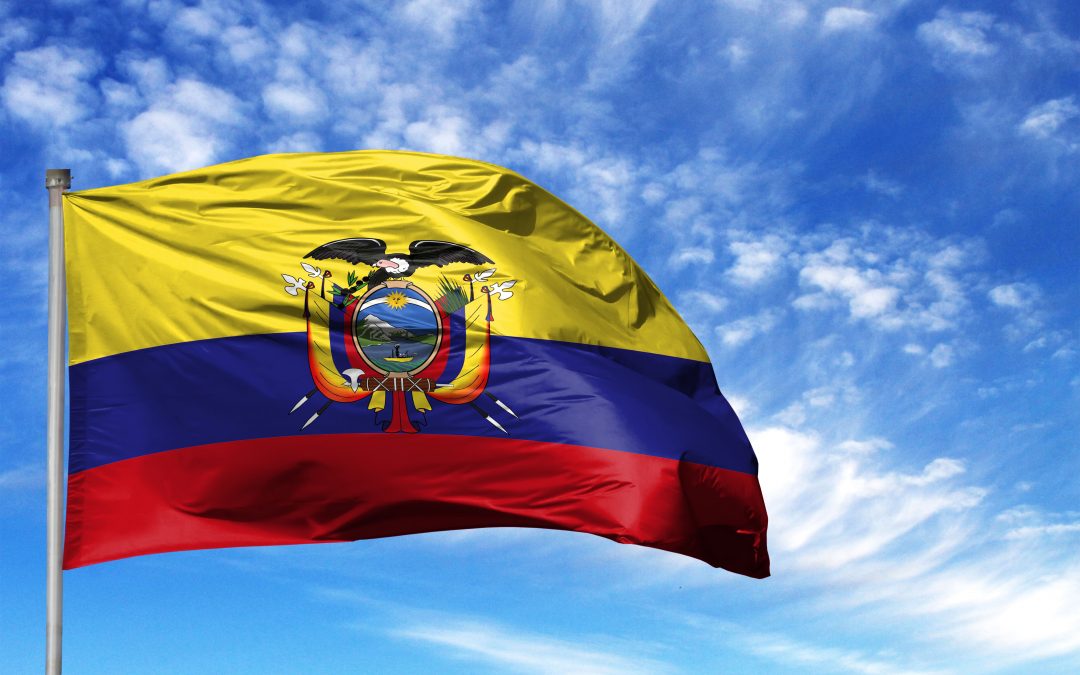 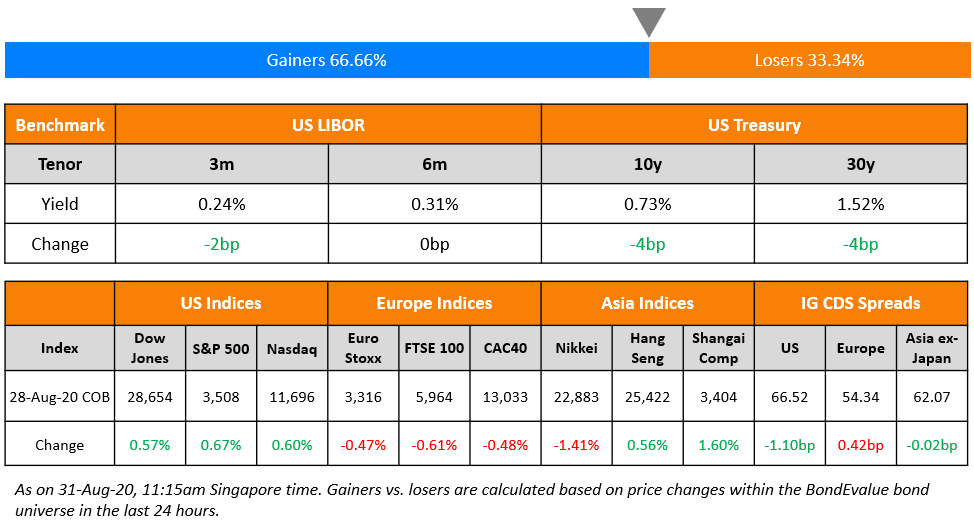 Asian markets are expected to open higher this morning after Friday saw strength on Wall Street with major indices continuing to hit new highs. Sentiment was positive with an uptick of 1.9% in consumer spending and reports that President Trump could sign a $1.3tn aid package soon. European indices were down mostly on profit taking in healthcare and technology sectors. The US Treasury curve steepened a few basis points with the short-end yields lower and long-end higher. European CDS spreads were wider, but US IG CDS spreads narrowed a tad. Asian dollar issuance were lower last week but deal flow is expected to pick up. 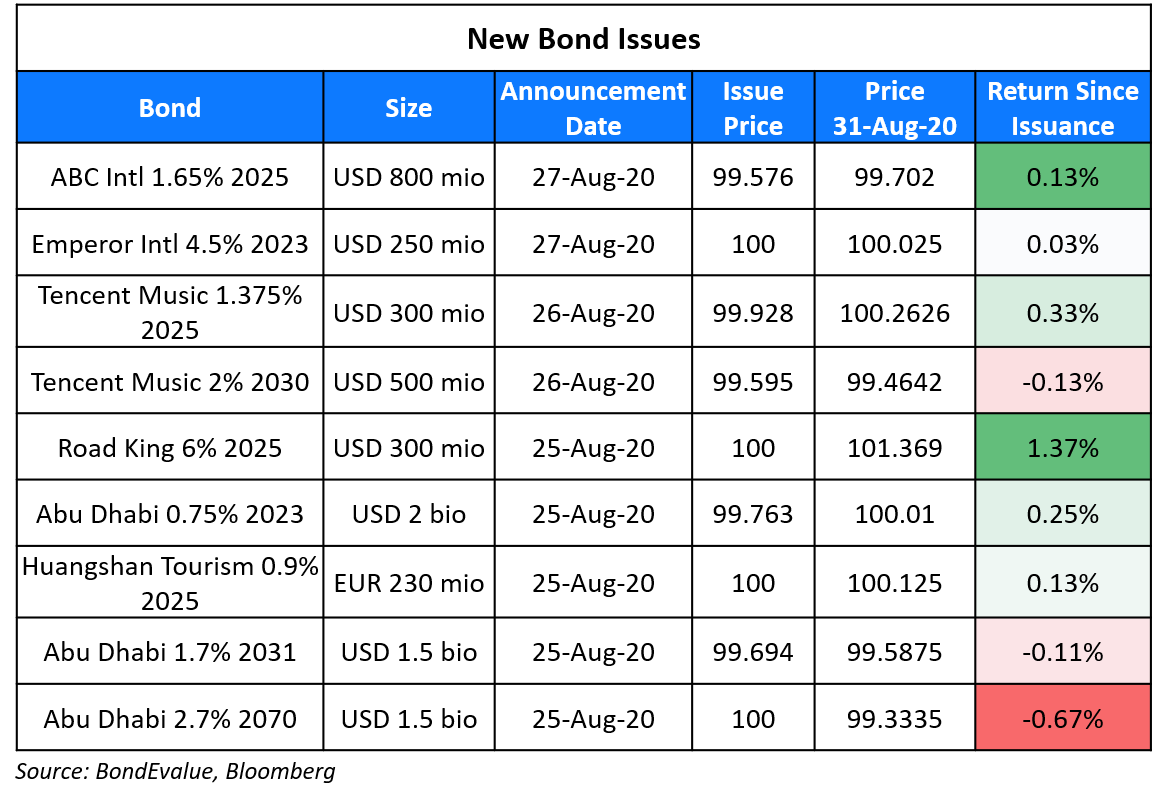 Reliance Industries Limited (RIL) on Saturday announced the acquisition of Future Group for INR 24,713 crore (~$3.37bn). Reliance Retail Ventures Ltd (RRVL), a subsidiary of RIL will acquire the retail and wholesale business and the logistics and warehousing business from Future Group. The retail and wholesale undertaking of Future Group will be transferred to Reliance Retail and Fashion Lifestyle Limited (RRFLL), a wholly owned subsidiary of RRVL. The deal is significant for RIL as it tries to expand its presence in the retail sector and is touted to be preparing to compete with Amazon and Flipkart in the e-commerce space. With the deal, Reliance Retail will reach 420 cities covered by Future Group’s ~1,800 stores, which include Big Bazaar, FBB, Easyday, Central and Foodhall formats. Future Retail has been in distress over the past few months given its high debtpile and stressed cashflows on the back of strict lockdowns across India. This led the company to miss its debut coupon payment on July 22, but it escaped default at the eleventh hour making the payment on the last day of its 30-day grace period on August 22.

“With this transaction, we are pleased to provide a home to the renowned formats and brands of Future Group as well as preserve its business ecosystem, which have played an important role in the evolution of modern retail in India. We hope to continue the growth momentum of the retail industry with our unique model of active collaboration with small merchants and kiranas as well as large consumer brands. We are committed to continue providing value to our consumers across the country,” said Isha Ambani, Director of Reliance Retail. Future Retail’s 6.5% bonds due 2025 were trading at 76.5 cents on the dollar, up over 20% since last Thursday. 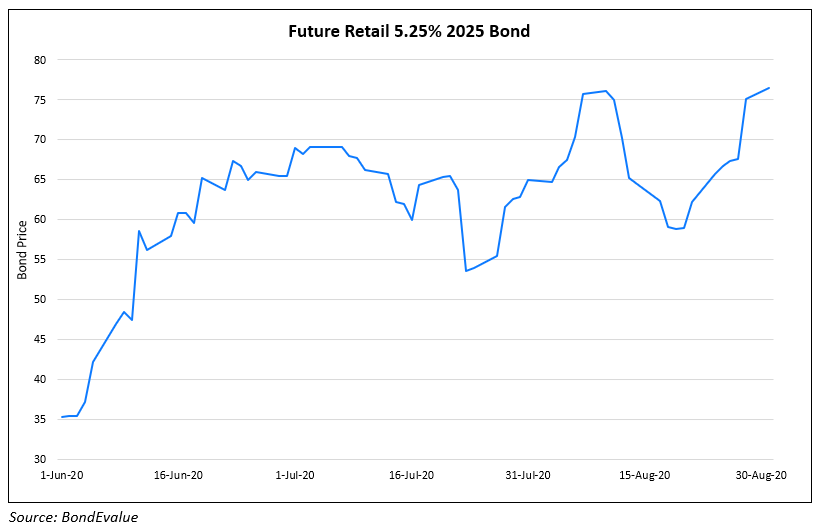 The IMF has agreed to provide a relief of $6.5bn to Ecuador subject to approval by IMF management and the executive board. The deal, which would provide an extended fund facility spanning over 27 months to the sovereign would help Ecuador in meeting funding needs and also finalise a debt restructuring with investors. The Latin American nation had been reeling under debt pressure even before the pandemic. The onset of the pandemic and the drop in oil prices made it harder for the sovereign to pay its debt. It underwent a slew of downgrades in April when Fitch rated it RD, S&P rated it SD and Moody’s rated it Caa3. Subsequently, it had reached an agreement to restructure its $17.4bn of sovereign debt with its bondholders in the first week of August. The deal, which resulted in a 9% cut for bondholders allowed the Andean nation partial debt relief of $10bn over the next four years and $6bn between 2025 and 2030. On the deal, the IMF said that “The fund-supported programme is aimed at first helping the Ecuadorean authorities stabilise the economy and protect the lives and livelihoods of the Ecuadorean people, and then preparing the ground for economic recovery and promoting sustainable and inclusive growth,” while adding “Additional financing from Ecuador’s bilateral and multilateral partners is critical,”. With the debt restructuring in sight, S&P Global set to raise Ecuador sovereign ratings.  Ecuador’s bonds were largely stable with its 7.85% bonds due 2024 and its 9.525% bonds due 2027 trading at 55.2 and 51.9 cents on the dollar respectively.

Bahrain is preparing to tap the dollar bond market as it continues to be exposed to high fiscal strain. The smallest among the six Gulf Cooperation Council (GCC) members, the country is heading for one of the world’s biggest budget deficits of ~15.7% of its GDP as per IMF. It was downgraded by Fitch to B+ from BB- on August 14 on the back of combined impact of lower oil prices and the pandemic. The sovereign has reportedly sent a request for proposal (RFP) to banks for the new issuance, which is likely to be a mix of conventional bonds and sukuk. The country had raised $2bn through 10Y notes and 4.5Y sukuk earlier this year and could raise another ~$1bn during the year to meet its needs, as per Arqaam Capital.

In related news, Dubai has also issued RFPs for a sukuk offering. No decision has been reached on the sale of the Islamic bonds by the Sheikhdom as per Bloomberg. In case the federation decides in favor of tapping the market, it will follow other Gulf nations, which have raised capital from the international bond market this year. Abu Dhabi, capital of UAE had raised $5bn in a three-part offering last week.

Philippine Treasurer Rosalia de Leon raised concerns over the growing budget deficit of the country, which could widen to 9.6% of GDP this year from 3.55% last year. According to the Treasurer, “The nation is watching the developments following the Fed’s decision on their longer run objectives and monetary policy” while adding, “The nation will continue to tap “usual suspects” in the overseas market.” Philippine has impending maturities worth ~$2.8bn for 2021 and it looks to raise $1bn in dollar bonds and $1.35bn in yen-denominated notes to complete a $6bn of planned overseas commercial debt funding as per BusinessWorld to bridge the gap. On the BusinessWorld’s report on the planned 2020 offshore bond sale, de Leon said she is “just watching markets, but not tapping.”

BBs and Bs led the pack with 80.4% and 78.4% of those bonds delivering a positive price return. In comparison, bonds rated A- and higher underperformed with 67.2% delivering a negative price return. This can be partly attributable to the pressure on longer-dated (30Y and higher) bonds, which tend to be higher rated as investors are more-willing to lend to higher rated issuers for longer tenors. 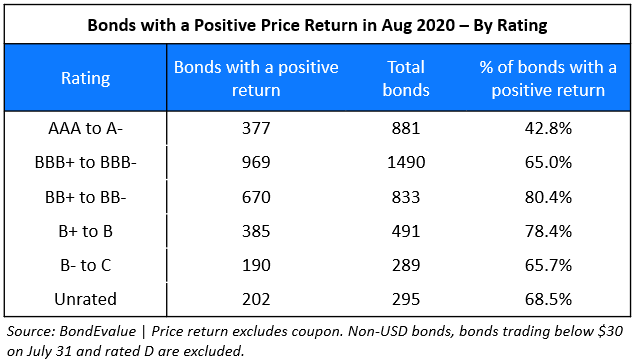 Longer dated bonds were under pressure given the steepening in the Treasury curve, which led to the 30Y Treasury yield rising by over 31bp through August. The steepening came after Fed Chair Powell indicated that the Fed will let inflation run beyond the 2% target in the short-term. 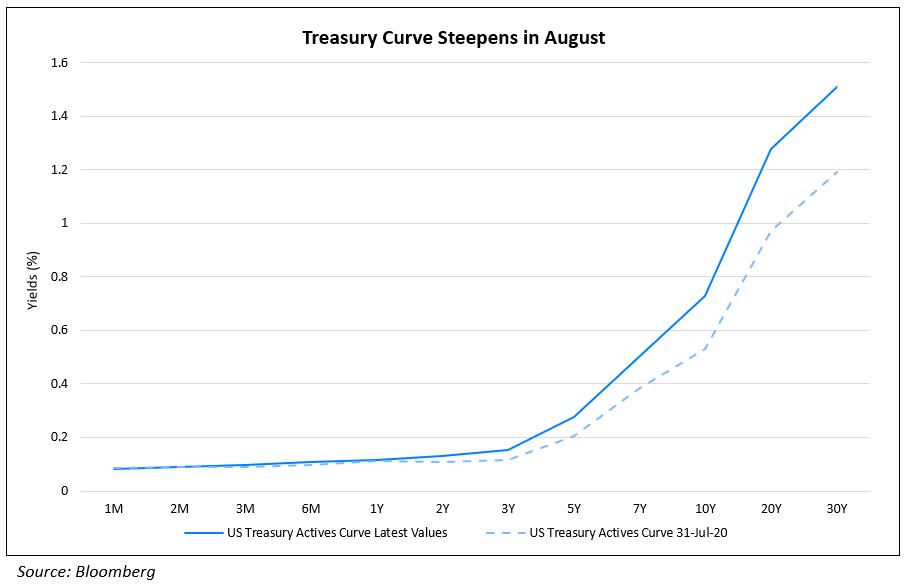 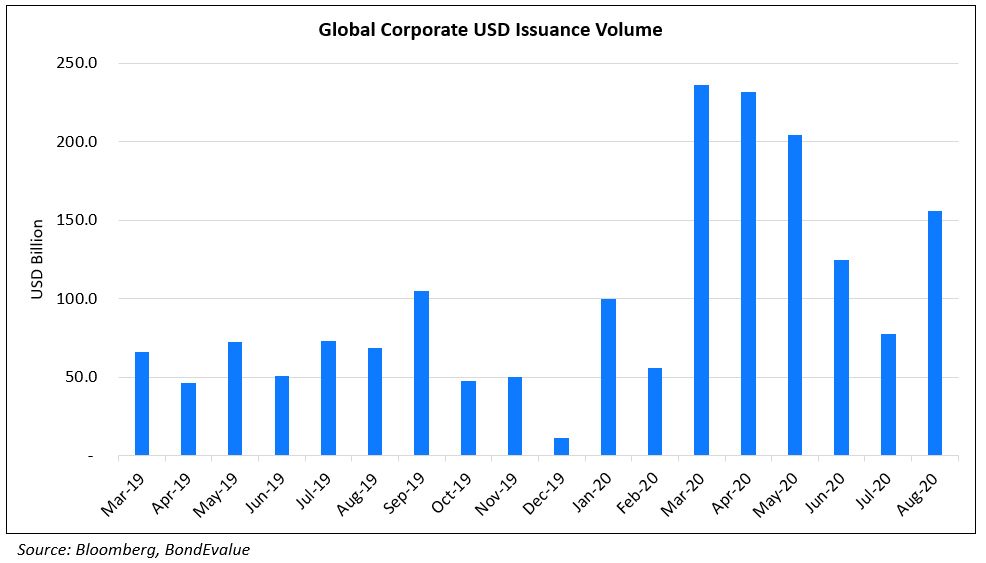 The same trend was not seen in Asia, where total G3 issuance for Asia ex-Japan stood at $21bn, almost half of July’s issuance of $40bn and 33% lower than the Jan-July average issuance of $30bn. 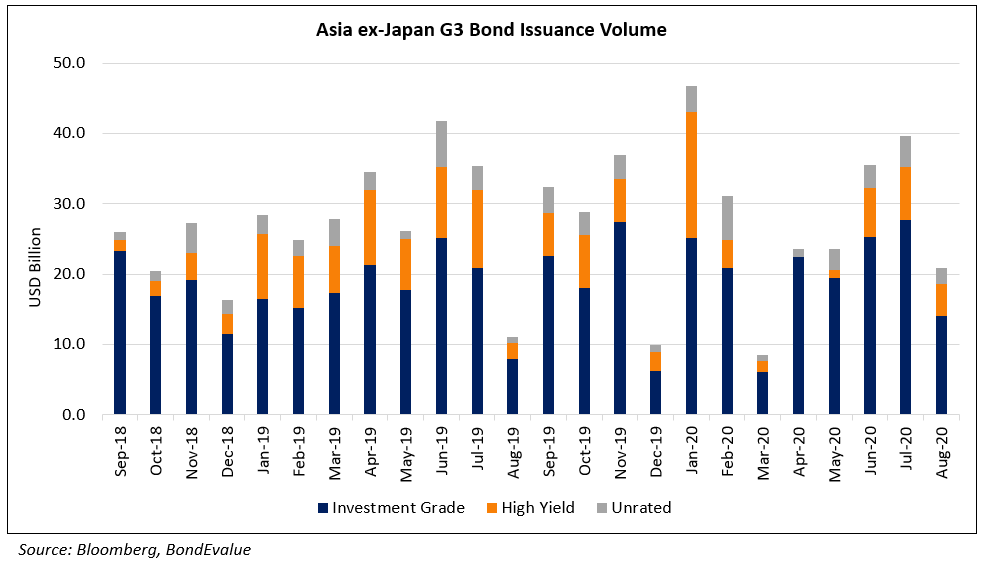 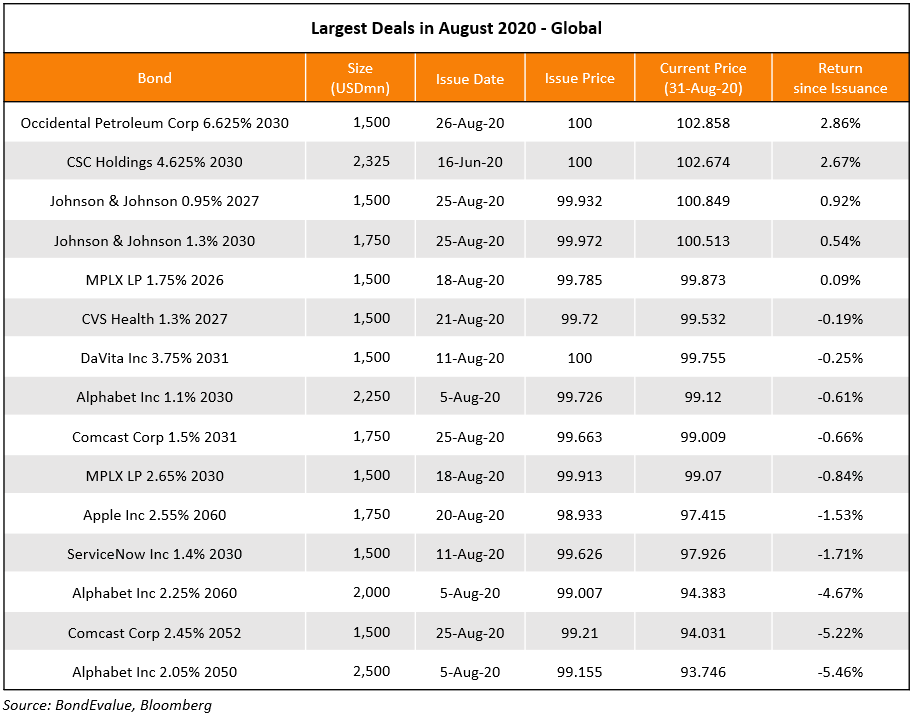 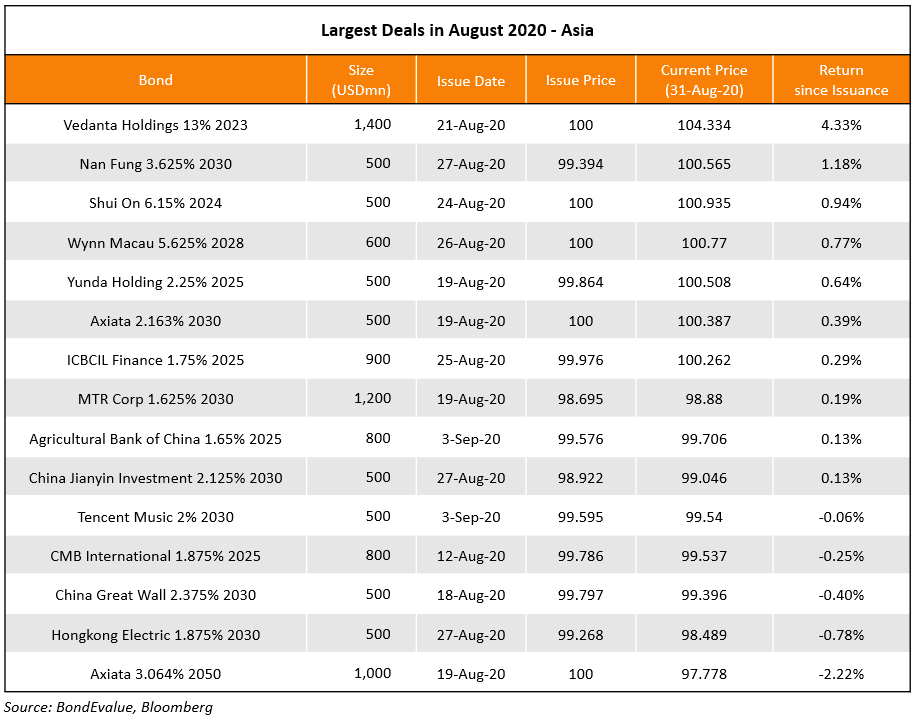 In the tables below, we have listed the top gainers and losers in terms of price return (ex-coupon) – globally and in APAC.
US-based energy companies Forum, Montage, EnLink and Denbury made it to the gainers list. Other noteworthy gainers, also from the US, include Frontier Communications, American Airlines and Bed, Bath & Beyond. Oddly enough, several US-based energy companies also made it to the losers list with bonds from Global Marine, Tullow Oil and Transocean. 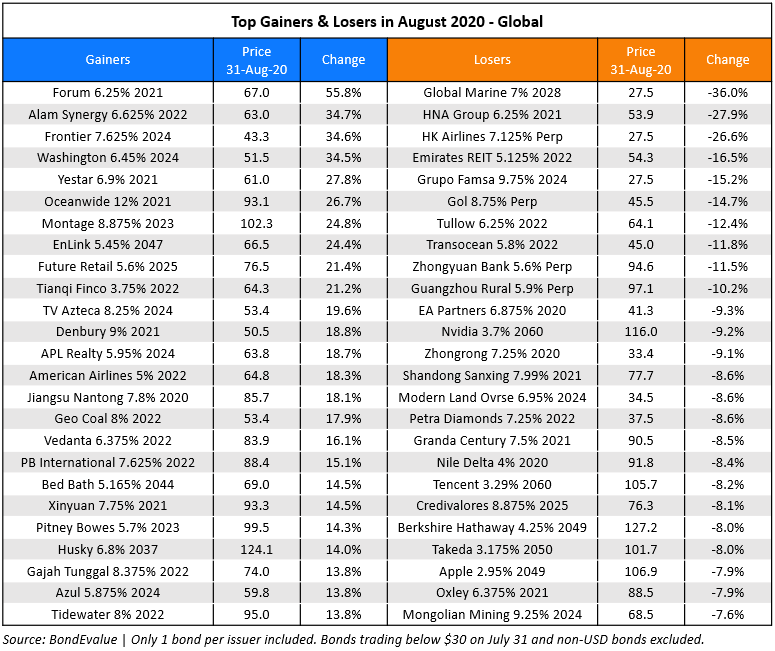 Within APAC, Indonesian real estate company Alam Sutera led the charts returning 35% to investors despite a downgrade by Fitch to CCC- at the start of the month. Future Retail’s debut dollar bonds rallied after the much-anticipated acquisition by Reliance. Other noteworthy gainers from APAC include Vedanta and Sri Lanka. In terms of the losers, HNA Group topped the list with its 6.25% 2021s down 28% and HK Airlines‘ 7.125% Perp down 27% in August. As mentioned above, high-rated longer-dated bonds were under pressure given the spike in the long end of the Treasury curve, which pushed bonds from Tencent, Takeda, PTT, Korea, Mamoura (Mubadala), Pertamina, Temasek, CGNPC and Thai Oil into the top losers list falling between 5-8% through August. 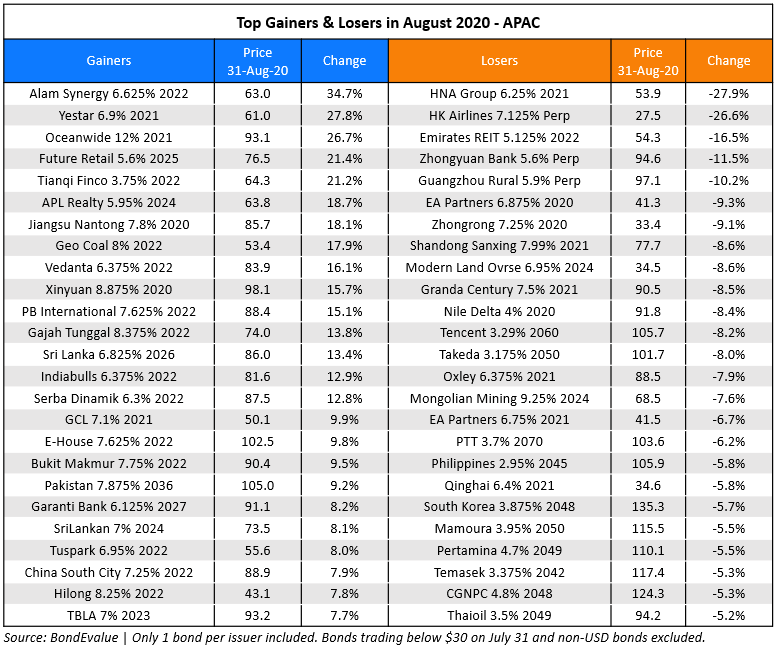 Tap refers to a bond issuance wherein the issuer issues more of an existing bond rather than issue a new bond. Taps, also known as reopenings, are common in the corporate bond market and can be quoted as a price or yield during the initial price guidance stage of issuance. Modern Land (China) has launched taps of two of its existing dollar bonds this morning:

The two taps are capped at $50mn each.

“There are times when we need to go big and go fast,” Bailey said. “We are not out of firepower by any means, and to be honest it looks from today’s vantage point that we were too cautious about our remaining firepower pre-Covid. But hindsight is a wonderful thing when you have it.”

“Monetary policy has had to respond to an unprecedented shock. For many central banks, the main tool to date has been further quantitative easing (QE), in unprecedented scale and pace of purchases.”

“We are not going back to the same world,” warned Shanmugaratnam. “We’ve got to avoid a prolonged period of high levels of unemployment, and it’s a very real prospect. It is not at all assured that we will get a return of tight labour markets even with traditional macroeconomic policy being properly applied.”

“Bailey’s argument was that (quantitative easing) is a really powerful tool, especially when markets are disorderly – so some weight should be put on reducing balance sheets so at the end we have space to start buying again. No one’s really made that argument the same way.”

“There’s a risk that we are overdoing the gloom and doom and that we will ultimately find that this huge economic hit will be much more temporary than incorporated in most forecasts.”

“We cannot afford at the current juncture a repeat of the fiscal tightening that we saw in the great financial crisis.”

“The Fed has bought some room for the emerging markets,” Rajan said. “But that doesn’t mean they have a license to do exactly what the Fed did, they don’t have that much room.”

“The Fed’s shift will give EM central banks some breathing room as typically interest rate differentials and their currency implications play a key role in monetary policy decisions,” said McCully.

“We believe that the rate cut window is virtually closed in the short-term and there is a significant likelihood of a change in RBI’s accommodative policy over the next three to six months particularly if the retail price index doesn’t come down,” the report said.

“But such a scenario has enhanced the risks of stagflation, which implies a painful phase of high inflation but low or negative growth, aggravating the challenges currently faced by the policymakers,” the report said. 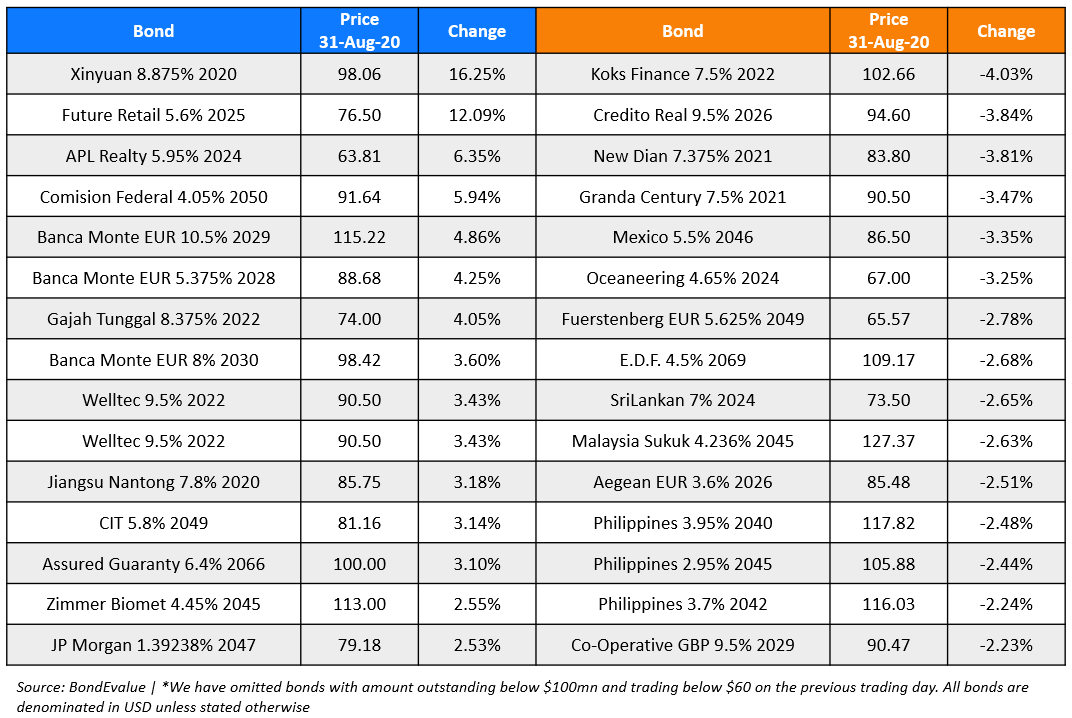