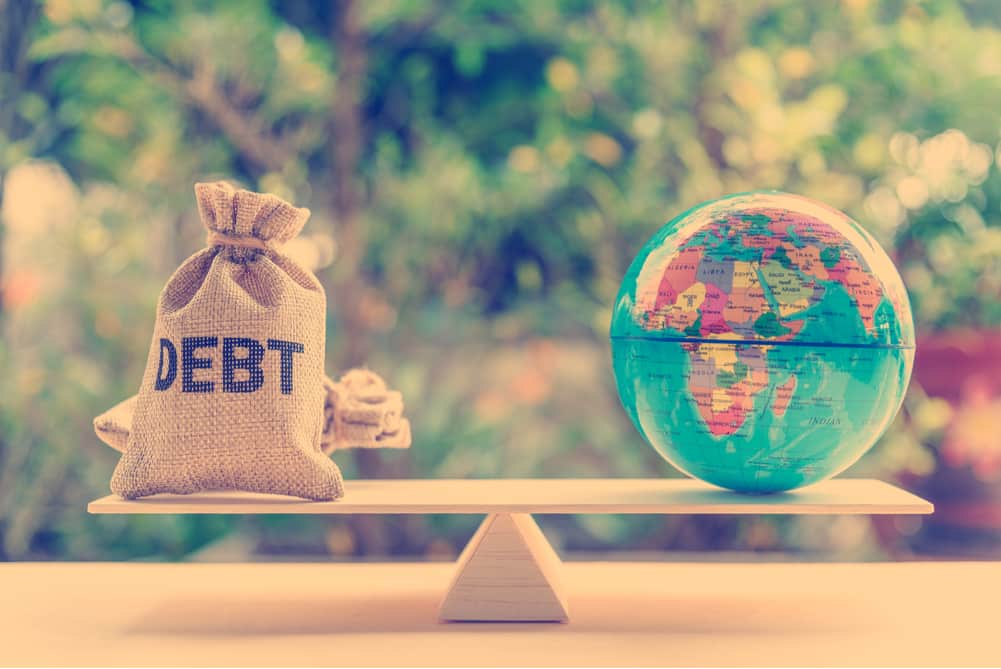 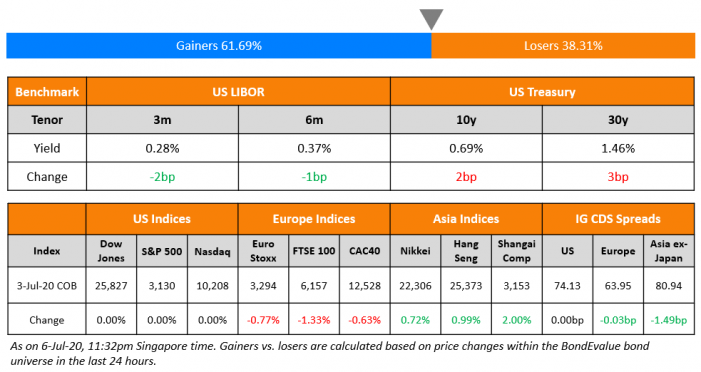 Markets are opening higher this morning despite a lack of any major news. The US was on holiday on Friday for Independence Day and US index futures are recovering Friday’s losses this morning and then some. July 3rd saw the record for daily cases globally but investors still find comfort from recent economic data that economies are picking up. Asian shares are at their four month peak as cheap liquidity and stimulus measures outweigh coronavirus fears. Asian dollar bond spreads were lower for the tenth straight week. 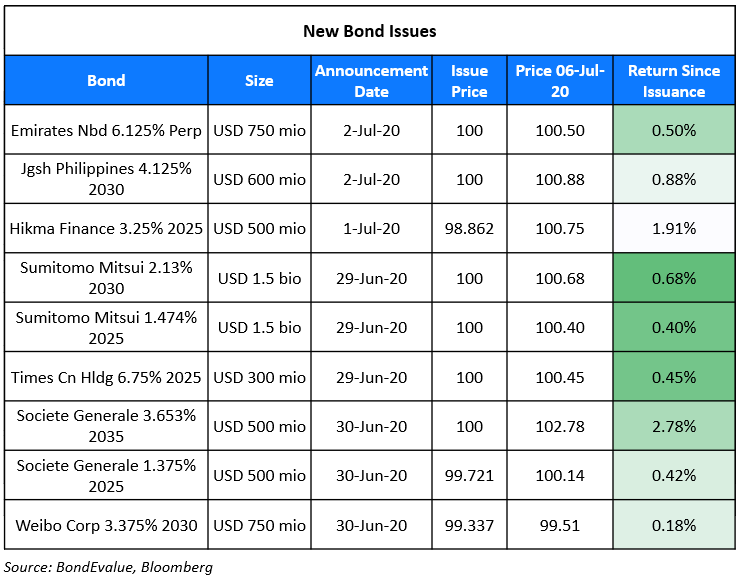 In a video interview with CNBC last Friday, James McCormack, Fitch’s global head of sovereign ratings said that he expects the rating agency to downgrade more sovereigns in the near term on the back of the hit to the economies due to the pandemic. Of the 119 countries rated by Fitch Ratings, it has downgraded a record 33 sovereigns in the first half of this year and has placed the ratings of 40 sovereigns on a negative outlook, indicating further room for downgrades. McCormack explained that many governments have ramped up their spending to support their economies amid the pandemic, which is expected to deteriorate the governments’ financial position. “Our concern really is what happens after we get to the other side of the coronavirus crisis period,” he said. “I think that’s the focus that we have and that will really be the factor that determines where the ratings go.”

Nearly $51.1bn of bonds issued by Chinese corporates are due in the second half of this year. There are strong indicators that the default rates are likely to increase as businesses have taken a hit due to the ongoing pandemic. The growing concern of rising defaults have led the Chinese central bank, the People’s Bank of China to advise struggling issuers to seek an out of court settlement with bondholders to avoid default. The announcement comes just a week after the Chinese regulators including the China Securities and Regulatory Commission and National Development and Reforms Commissions, issued a new set of rules to enforce the investor’s protection just last week to reduce the uncertainties faced by bondholders in redeeming their money. “The encouragement of debt restructuring using market mechanisms may give companies more time to avoid outright defaults,” according to Jenny Huang, Director for China at Fitch Ratings. While restructuring via bond swaps and maturity extensions could shorten the time needed by issuers to manage their financial position, it does not guarantee repayment to bondholders. These efforts to restructure further distort the real picture of corporate defaults in China. China’s bond market currently ranks second in the world with a balance of 108tn yuan ($15.29tn) as per an announcement by the People’s Bank of China on Friday.

In related news, XinhuaNet reported a significant increase in foreign investors’ holdings of Chinese bonds. As of June end, the total amount of yuan denominated bonds owned by foreign investors rose to about 2.2tn yuan, an increase of 33.48% YoY and 3.93% MoM. Foreign investment has risen continuously for 19 months and is indicative of the strong investor appetite for the local Chinese bonds. However, most onshore government bonds bought by foreigners only include investment grade bonds.

As Argentina continues to reel under recession since the last two years, the Argentinian government is looking to restructure ~$65bn of bonds. The government announced an amendment to its proposed restructuring with a deadline of Aug 4 as it looks to engage with the bondholders. “The government has made a substantial improvement relative to the first offer introduced by mid-April,” said Ramiro Blazquez, head of research and strategy at BancTrust & Co. The proposals in the past have faced stiff resistance from investors on the fear of losing out. The fresh proposal, which is aimed at reducing creditor losses, increasing coupons and shortening bond maturities, looks at making capital payments in March 2025 and set semi-annual coupons. It also offers step-up coupons beginning at 0.125% next year taking the payment amount to 5% annually for some bonds. The offer also proposes a swap for existing dollar and euro bonds maturing between 2030-2046. The country’s sovereign bonds have traded stable since the announcement. The government is likely to present its new offer to the US Securities and Exchange Commission in the coming days. Meanwhile, AlJazeera reported that according to the Argentina Creditor Committee (ACC), a new counter offer by bondholders could provide the country a cash flow of $39bn over the next 8 years.

In an announcement on July 2, Argentina’s state-owned energy giant YPF proposed a swap to extend the maturity on its $1bn bond due March 2021. The proposal comes with a sweetener of cash payments and a new series of Negotiable Obligations with a final maturity in 2025. This would result in investors receiving a cash of $100 and the new series worth $950 for every $1000 face value of Class XLVII. The coupon for the new bonds rated CCC/RR4 by Fitch would be 8.5% with amortizing payments starting in 2022. The bonds of the company have been largely stable since Friday.

Accrued interest is calculated as per follows:

Andrew Bailey has written a letter to lenders warning them that negative rates were “one of the potential tools under active review” if the monetary policy committee decided that “more stimulus” was needed to hit the BoE’s 2% inflation target. A report said that Bailey held a meeting with heads of banks at the end of June where negative rates were discussed, and the governor said “every tool they have is on the table”. Bailey has previously said that negative rates were an option for the BoE, but that the issue was complex and taking borrowing costs below zero was not in any way imminent.

He added that many banks would need 12 months to change computer systems, update financial contracts designed for a world of positive interest rates and work out how to communicate with clients.

Lagarde said the euro zone faces about two years of downward pressure on prices but could see a turnaround after that because the coronavirus crisis will accelerate the transformation of the economy through greater digitization and automation, shorter supply chains, and greener industries.

“The transition to new economic models will be disruptive — they will probably be more disruptive in the first two years, obviously hitting employment and production — and then we can hope it improves productivity,” Lagarde said. “So the inflation dynamic will necessarily be impacted, probably with a disinflationary, deflationary aspect at first, and then an inflation dynamic.”

“I am determined to have the same debate with governors at the ECB to ensure that in all areas, climate risk and biodiversity is taken into account,” she said. “We won’t do it in one day, but we must question in every domain, stress test by stress test.”

Henry McKinnell said the surge in Covid-19 cases in India meant that reviving Asia’s third-biggest economy would remain a “major challenge”. “The only tool we have right now [to fight coronavirus] is social distancing and that’s exceptionally hard to do in India,” said Mr McKinnell. Moody’s expects India’s economy to contract 3.1% in 2020. In June, Moody’s downgraded India to Baa3, the lowest grade investment rating.

Yet Mr McKinnell said that once India was able to control the spread of the disease, it was well placed to attract more manufacturers looking to diversify their supply chains from China in areas such as chemicals, pharmaceuticals, or electronics. “Everybody now is looking for alternative sources of supply…The opportunity in India is to move up the supply chain.”

On the Demise of the 60/40 Portfolio – Jan Loeys and Shiny Kundu, strategists at JP Morgan

JP Morgan is joining the list of Wall Street banks that are calling for the demise of the 60/40 portfolio in the coming years. “In the zero-yield world, which we think will be with us for years, bonds offer neither much return nor protection against equity falls,” said Jan Loeys and Shiny Kundu.

The British government should be wary of the fact that its mammoth debt pile will always be so cheap or that inflation is dead, said six former government advisers. “The volatile history of interest rates should make us wary of thinking low real interest rates are here forever. The possibility of surprise inflation still exists,” they said. “In the 1970s, inflation peaked at over 25% in the UK, a level few had predicted only a few years earlier.” The advisers said reform of the UK’s tax system was essential, including a digital tax. “This should be prioritised regardless of concerns from partners such as the U.S. over a digital services tax,” they said.

On Canada’s Journey Ahead – Craig Wright, chief economist at Royal Bank of Canada

Canada should focus on boosting economic growth post the COVID-19 crisis, analysts say, even as concerns about its debt are growing, with Fitch downgrading the nation’s rating just over a week ago. “The only solution to these large deficits is growth, so we need a transition to a pro-growth agenda,” said Craig Wright. He added, “We have to make sure that government spending is calibrated to the economy of the future rather than the economy of the past.” 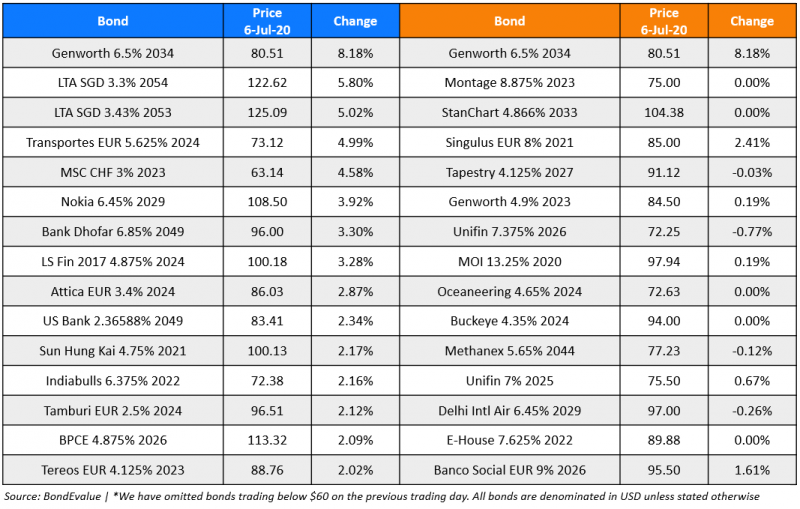