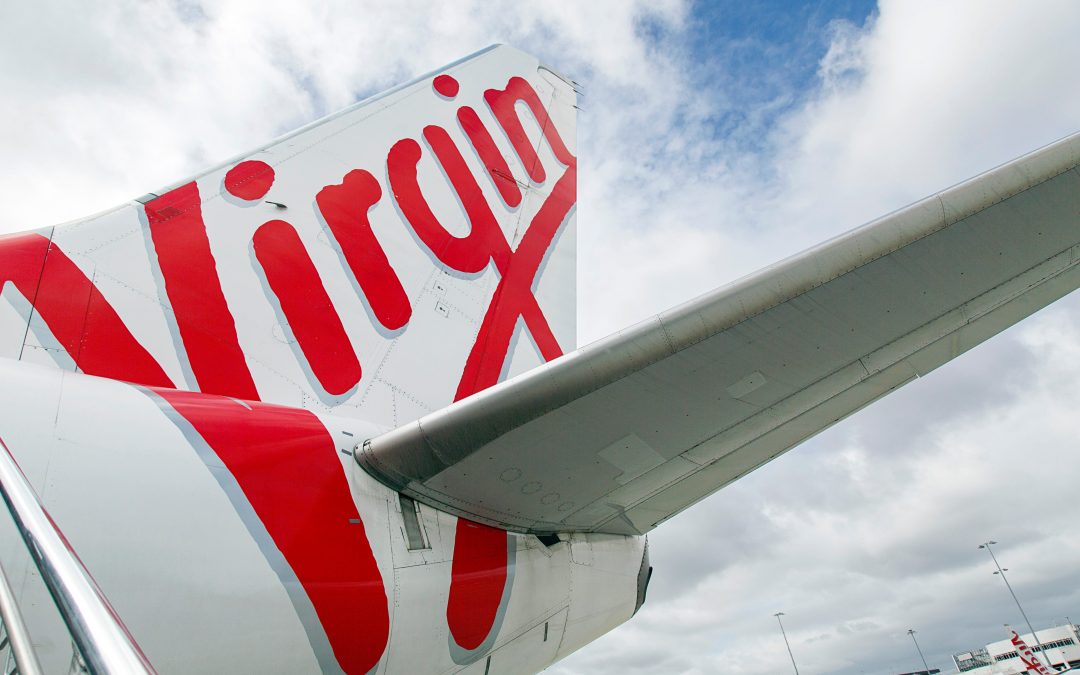 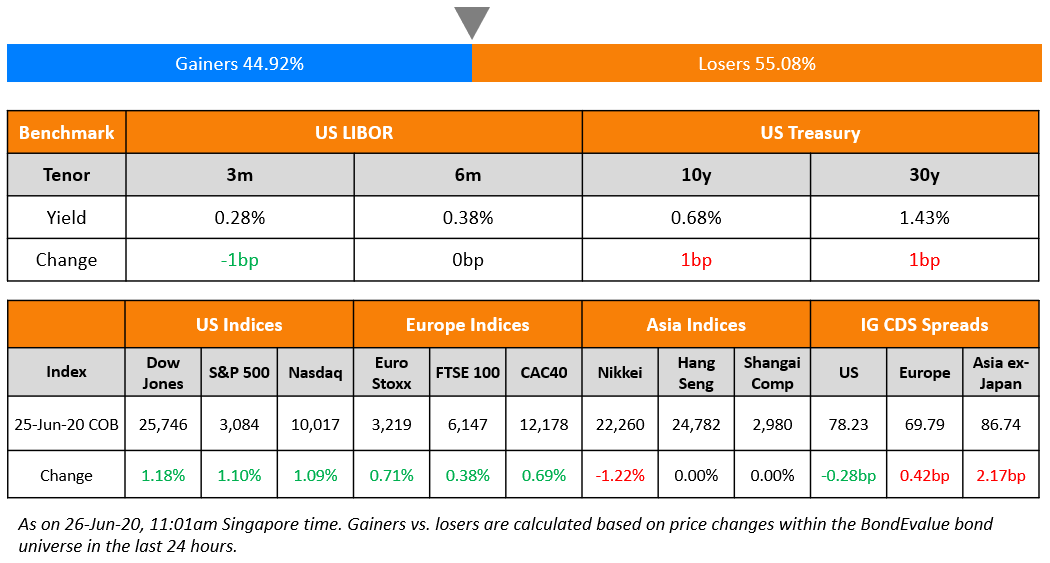 Markets get choppy as central banks continue to lock horns with the coronavirus. More stimulus measures gave some relief and western markets reversed almost half the losses from Wednesday’s session. The late rally also reversed earlier losses in the day of around 1% to end up 1%. Financial stocks led the rally as there was easing of post 2008 crisis rules that will free up capital for banks. A new Eurosystem repo facility is also being set up to provide euro liquidity to non-euro area central banks. The Fed also told the biggest US banks they can’t increase dividends or resume buybacks through at least the third quarter but analysts dismissed this as not too harsh. Further gains may be capped as investors still remain wary of the recent spike in cases of the virus and the impact it could have to lockdowns and re-opening schedules. US Treasuries still saw some safe haven bids and CDS spreads were little changed. Asian markets are opening higher this morning following the overnight gains.

We hosted the first of a series of Bond Masters’ Masterclasses yesterday, attended by participants from over 15 countries. Here’s a snippet of the session. 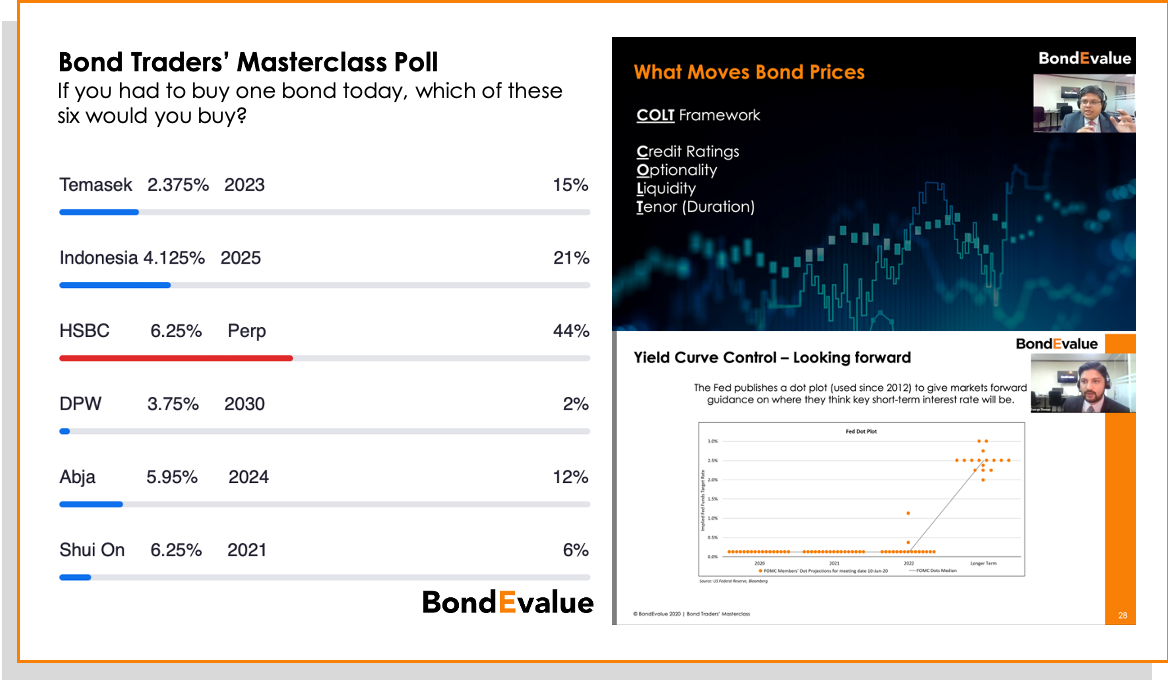 Learn more about the masterclass here. 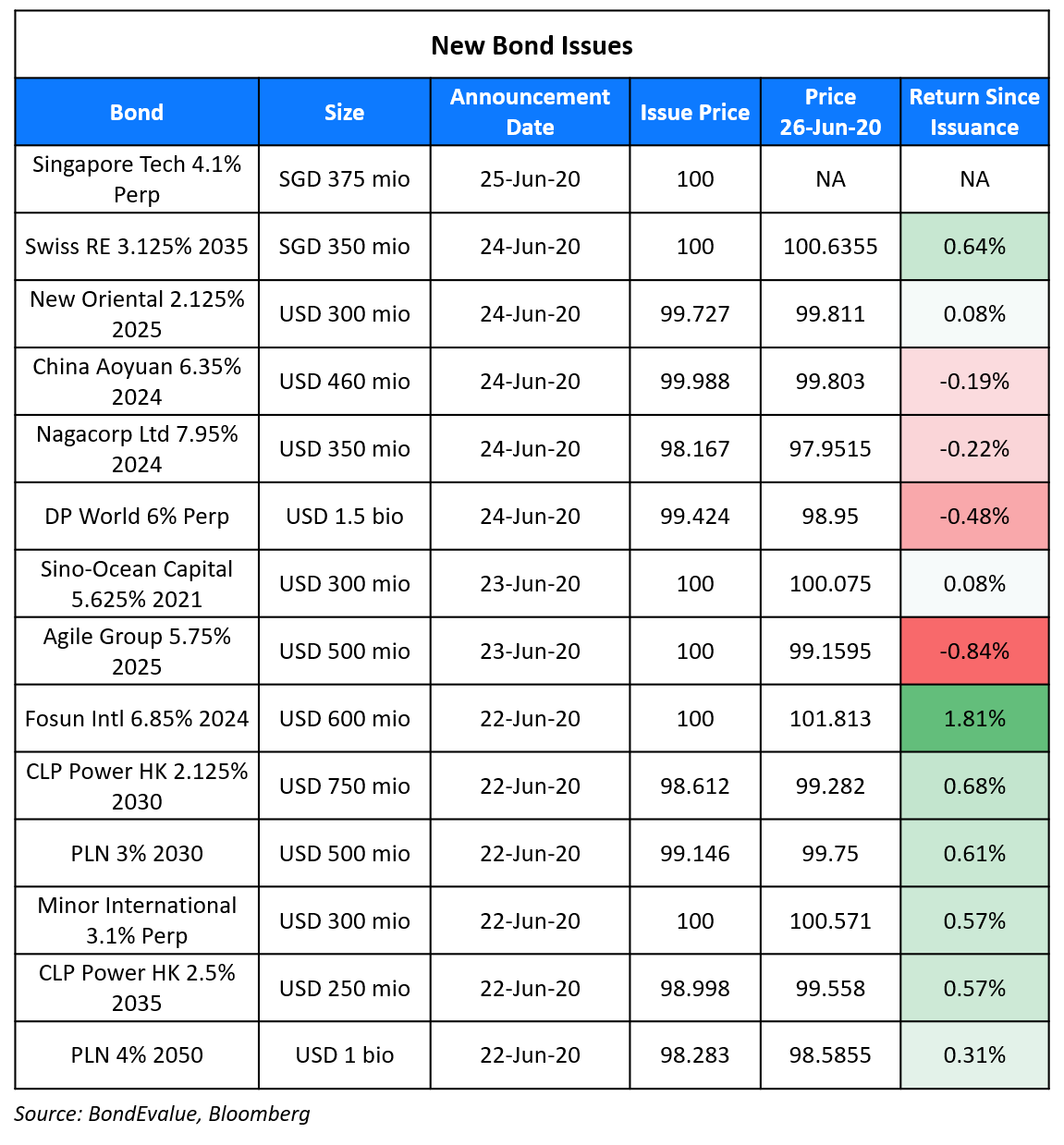 Singapore Technologies Telemedia raised S$375mn via Perpetual NC7 bonds at a yield of 4.10%, 27.5bp inside initial price guidance of 4.375% area. The bonds received final orders exceeding S$2bn, 6.67x issue size. If not called in 2027, the coupon will be reset to the prevailing Singapore dollar SOR plus the initial spread of 335.5bp. Singapore Tech last issued a Perpetual NC5 in January 2019, where they raised S$350mn at a yield of 5%. The old perpetuals are yielding 3.6525% on the secondary markets currently, indicating a new issue premium of 44.75bp on the new perpetuals.

American private equity giant Bain Capital will take over distressed airline Virgin Australia. Virgin Australia’s administrator, Deloitte agreed to sell to Bain after rival bidder Cyrus Capital Partners withdrew its rescue offer citing “lack of engagement” from Deloitte as the reason for withdrawal. Cyrus, which was a founding investor along with Richard Branson in Virgin America, was the union’s preferred contender. Neither Deloitte nor Bain revealed details of the deal such as the size of the bid, how many jobs will be lost or how much would be paid to creditors, which are owed $6.8bn. “We are determined to see that Australians have access to competitive, viable aviation services for the long term,” Bain’s local boss Mike Murphy said. According to IFR, Bain is likely to impose a haircut far larger than 30%, assuming creditors agree to sell Virgin to the preferred buyer at a scheduled meeting in mid-August. Deloitte will have to measure Bain’s offer with that from the bondholders to consider the rights of all creditors. Sources close to the dealings say the Bain offer has little in the way of a payout for bondholders who are owed $2 billion, according to The Sydney Morning Herald. Virgin Australia’s AUD bonds due 2021 through 2024 traded largely unchanged between 15-19 cents on the dollar.

American oil driller Occidental Petroleum Corp (Oxy) launched a three-tranche new issuance on Thursday. According to Bloomberg, early price discussions reveal the 5Y yield in the high 7% area, 7Y yield 50bp higher, and the 10Y yield a further 50bp higher. This is the first issuance by Occidental since it was downgraded to junk in March. The Houston-based company plans to use proceeds from the new issue to fund its bond buyback and refinance existing debt. The company’s top priority for repurchase is its $1.25bn 4.1% floaters due 2021, offering $100.5 per $100 in principal to holders that tender the bonds by the early deadline of July 9. It is also repurchasing eight other bonds that mature in 2021 and 2022, offering between $93.5 and $100.75 per $100 in principal to holders that tender the bonds by the early deadline. Occidental’s finances have been under pressure since it outbid Chevron to purchase Anadarko Petroleum Corp. The transaction saddled Oxy with a $40bn debt pile. The new issue comes after the company announced that it may take a $6bn to $9bn writedown in the second quarter on the back of lower commodity prices due to the pandemic. Occidental’s bonds traded lower by ~1-3 points overnight with its 3.5% bonds due 2029 at 77.68 and its 6.2% bonds due 2040 at 86.49 cents on the dollar.

In related news, Moody’s downgraded Occidental’s corporate family rating to Ba2 from Ba1 and rated its proposed new bond in line with that at Ba2.

United Airlines managed to upsize its debt raise by 36% to $6.8bn, up from the proposed $5bn debt raise. This comes a month after it scrapped its proposed debt sale due to unfavorable terms. It raised $3.8bn via 7Y non-call 3Y senior secured bonds at a yield of 7%, at the lower end of guidance of 7-7.26%. The new bonds are backed by the carrier’s rewards program, as reported by us earlier this week, which led rating agencies to rate the new bonds at investment grade, higher than the junk rating on the carrier. The bonds, expected to be rated BBB-/Baa3, carry a covenant wherein the parent must maintain liquidity of at least $2bn. The other portion of the debt raise is a $3bn leveraged loan (Term of the day, explained below), which was upsized from $1bn initially planned.

Mexico’s central bank, Banco de Mexico (Banxico) decided to lower the target for the overnight interbank interest rate by 50bp to 5% amidst measures to combat the pandemic. The bank noted that economic activity in the country had contracted significantly during the first quarter although a slight recovery was expected as economic activity resumed slowly in some of the opened sectors and regions. Annual headline inflation rose to 3.17% from 2.15% against a target of 3% over the last three months. The risks to inflation included the widening negative output gap while the upside came from the foreign exchange depreciation. The downside to the economy due to uncertainty in inflation numbers, lower economic activity and risks to financial markets prompted Banxico’s rate cut. This was in line with market expectations and the bonds of the country remained stable. This was the fifth rate cut this year, taking the tally to 9 consecutive interest-rate cuts. Reuters reported that this was also the lowest level since September 2016 and that the IMP predicted a 10.5% drop in the country’s GDP.

Belarus President Alexander Lukanshenko is running for presidenct a sixth consecutive time in the upcoming elections scheduled on August 9. Yahoo reported that on Thursday, Lukashenko made a statement accusing Russia and Poland of interference even as many of his critics are being jailed. Lukashenko was in Russia with President Putin on June 24 and was considered as a strong leader in the erstwhile Soviet Union. The uncertainty in the country led to a fall in dollar bonds issued by the Belarus. The country had issued $1.25bn 5Y and 10Y bonds in June last year. The change in the bonds’ prices are listed below.

CEC Entertainment Inc joined the growing list of companies in the US which have filed for Chapter 11 bankruptcy. CEC is the parent company of Chuck E Cheese and Peter Piper Pizza. The company, which was acquired by private equity firm Apollo Global Management in 2014 through a leveraged buyout (LBO) has ~600 outlets of Chuck E Cheese and ~120 outlets for Peter Pizza. Even as the company is in the process of re-opening some its outlets in a phased manner, it seeks a debt restructuring due to the loss in its topline as a result of loss of customer visits following lockdowns. Bloomberg noted that the bankruptcy was filed without a proposal for a concrete deal although the company continues to engage with its stakeholders for the restructure plans. The bond holders and creditors of CEC could help the company stay afloat by pumping in more investment. Bankruptcy filing would allow CEC to shut the non-profiting locations while continuing operations from the profit making locations. As of June 24, 266 venues were reopened and more were likely to be opened in the future. Entertainment and leisure industries are among the most adversely hit sectors. CEC’s 8% bonds due 2022 witnessed a huge fall and were seen trading lower by 5.6 points at 10.03 cents on the dollar. 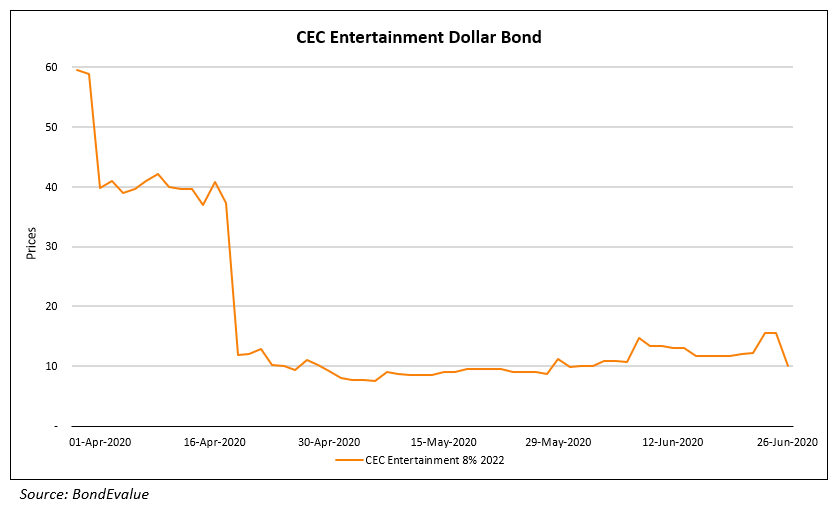 ECB rate-setters amassed proof that bond buys are a necessity at the moment, crediting them with keeping borrowing costs down while the European Union recovered from its recent debt crisis. “There was broad agreement among members. “There was broad agreement among members that while different weights might be attached to the benefits and side effects of asset purchases, the negative side effects had so far been clearly outweighed by the positive effects of asset purchases on the economy in the pursuit of price stability.” the ECB said in its minutes.

“The decision was in line with our expectations. By reiterating the guidance and not innovating much in the wording of the statement, the bank is sending the signal that another 50 basis-point cut in August should be the central scenario.”

On the Fear of Missing Out Among Investors – Nick Maroutsos, co-head of global bonds at Janus Henderson

“People are saying that if the Fed is going to back stock markets, or put a floor under debt markets, I might as well look to get a return that’s higher than what you get in [money market funds].”

Money market funds received $1.2tn of inflows between March and May, according to data from the Investment Company Institute as people are looking for safe havens in periods of market stress. But these funds have now experienced outflows for four consecutive weeks, totaling almost $105bn. Portfolio managers and bankers report that some investors are diverting cash into higher-yielding investments, such as corporate bonds. 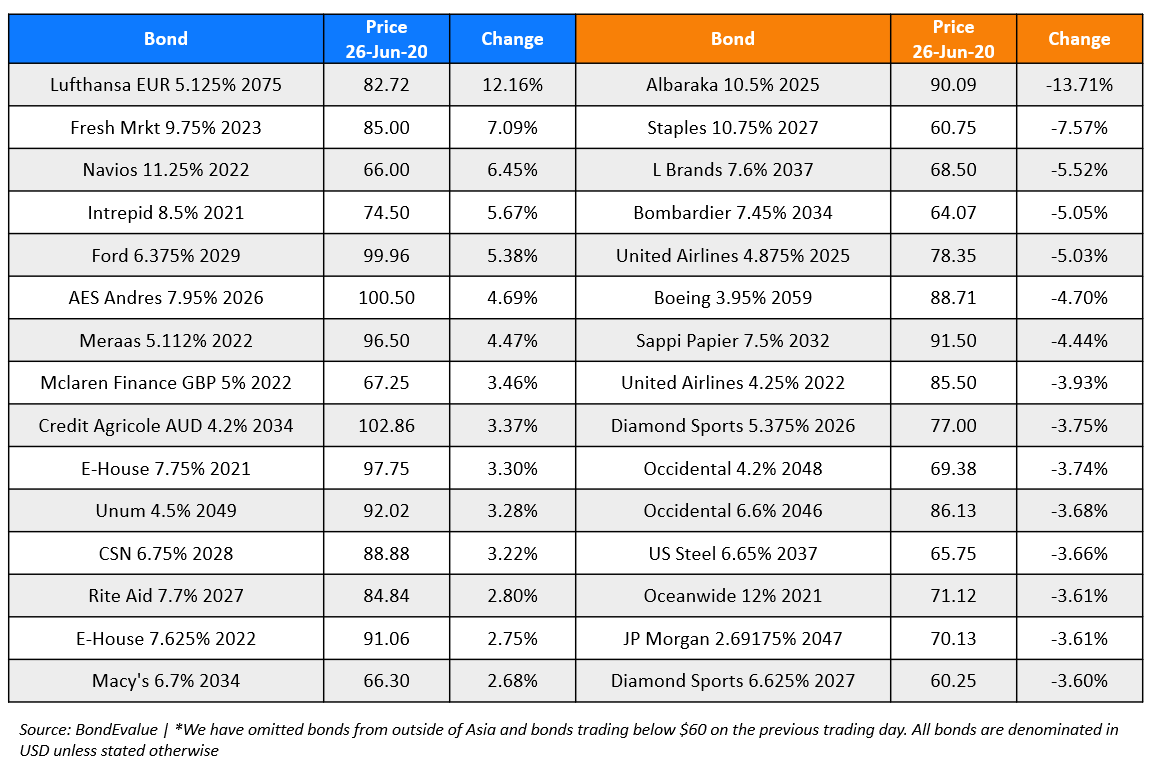