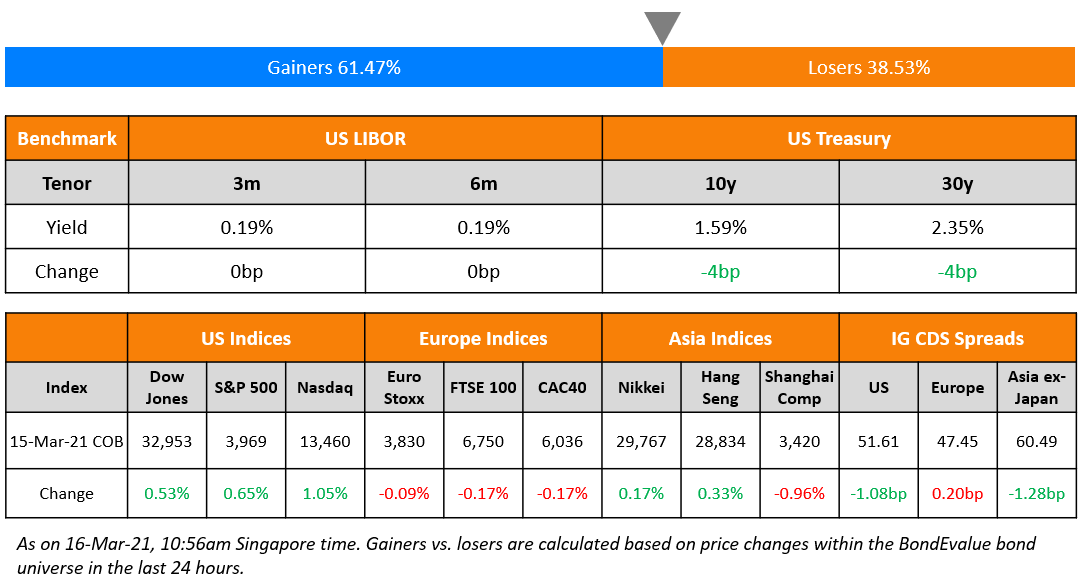 US equities advanced as S&P was 0.6% higher and Nasdaq over 1% higher. Utilities led the gains, up 1.4% followed by real estate up 1.2%. Financials and energy sectors fell 0.6% and 1.3% respectively. US 10Y Treasury yields eased by 4bp. European equities were 0.2-0.3% lower. US IG CDS spreads were 1.1bp tighter and HY was 0.9bp tighter. EU main CDS spreads were 0.2bp wider and crossover spreads widened 2.1bp. Asian equity markets have opened positive with gains of 0.4% and Asia ex-Japan CDS spreads are tighter by 1.3bp. Asian primary markets are seeing a busy day with five new dollar deals this morning.

We are also conducting a complimentary webinar “Navigating The Bond Markets by Leveraging The BEV App” on March 17, 2020 to help users exploit the BondEvalue app to manage their bond portfolio on the WebApp as well as the Mobile App. 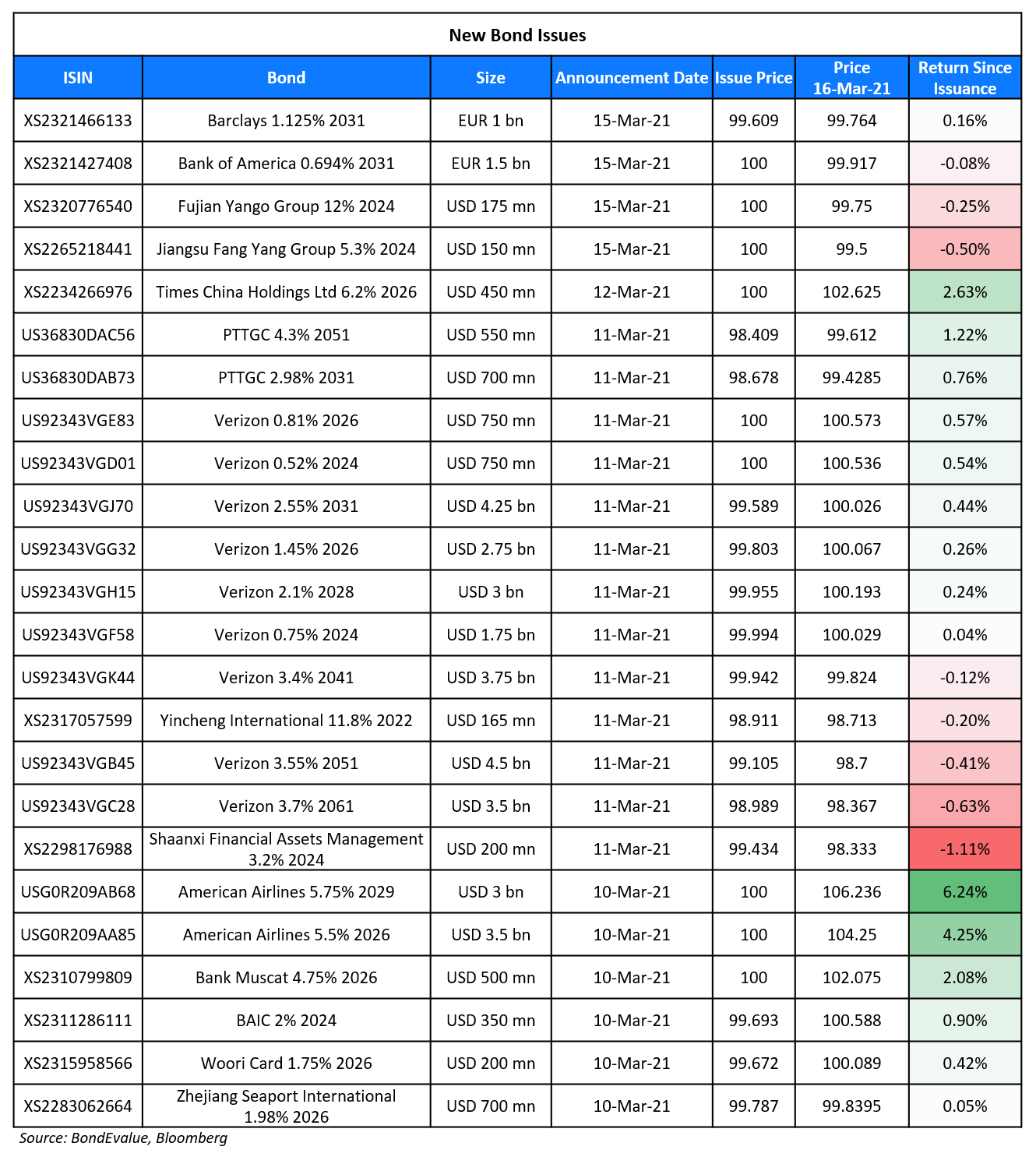 Fujian Yango Group raised $175mn via a 3Y non-put 2Y (3NP2) bond at a yield of 12%. The bonds have expected ratings of B- and investors have a put option at par after two years on March 19, 2023. Proceeds will be used for debt refinancing and general corporate purposes. Yango (Cayman) Investment is the issuer and Fujian Yango Group is the parent guarantor.

These are a type of Eurobond issued and traded in the US and are denominated in USD. In essence, if a foreign company (a non-US based company) issues a USD bond which is traded in the US, the bond is considered a Yankee Bond. This is in comparison to a Eurodollar bond that is issued by a foreign entity denominated in USD, but the bonds are issued and trade outside of the US. India’s Hero Clean Energy recently hired bankers for a green Yankee bond.

“An extrapolation from weekly data to overall monthly data may lead to misleading conclusions about our monthly purchase behaviour,” Schnabel added. “Do not read too much into weekly purchase data under the PEPP.”

In a note by Giles Gale, NatWest Markets strategist and team

“The bottom line for markets is now simple –- to be short is to oppose the ECB.” “That’s not something to take lightly.”

“I think there is still a bias toward accelerating economic growth,” said Joy.

According to ANZ economists

“Following the fiscal stimulus packages it is inevitable that Fed GDP forecasts will be revised up, and some FOMC members might think rates will have to move higher sooner than they anticipated last December.”

“The economics of investing in bonds (and most financial assets) has become stupid,” he said. “Rather than get paid less than inflation why not instead buy stuff— any stuff — that will equal inflation or better?” “I also believe that assets in the mature developed reserve currency countries will underperform the Asian (including Chinese) emerging countries’ markets,” he wrote, adding that Chinese bond holdings by international investors are rising fast.

“The property sector is the single most important driver of the Chinese economy, and arguably the biggest risk as well,” said Hu. “[So] the central bank is facing major challenges this year, including the cooling down of the housing market without a crash.”

“[But] the danger in this approach is that it merely reinforces the implicit guarantee [on housing prices] which has helped foster much of this risky behaviour in the first place,” Davies said. “All the while, China’s housing bubble is at increasing risk of bursting.”

“I do think we’re near the end of the virtual world,” Kirby said.

Rochelle Walensky, director of the US Centers for Disease Control and Prevention
“[Friday] is the most travellers that we’ve had in a single day since last March, before the WHO [World Health Organization] declared the global pandemic. We have seen footage of people enjoying spring break festivities maskless. This is all in the context of still 50,000 cases per day.” 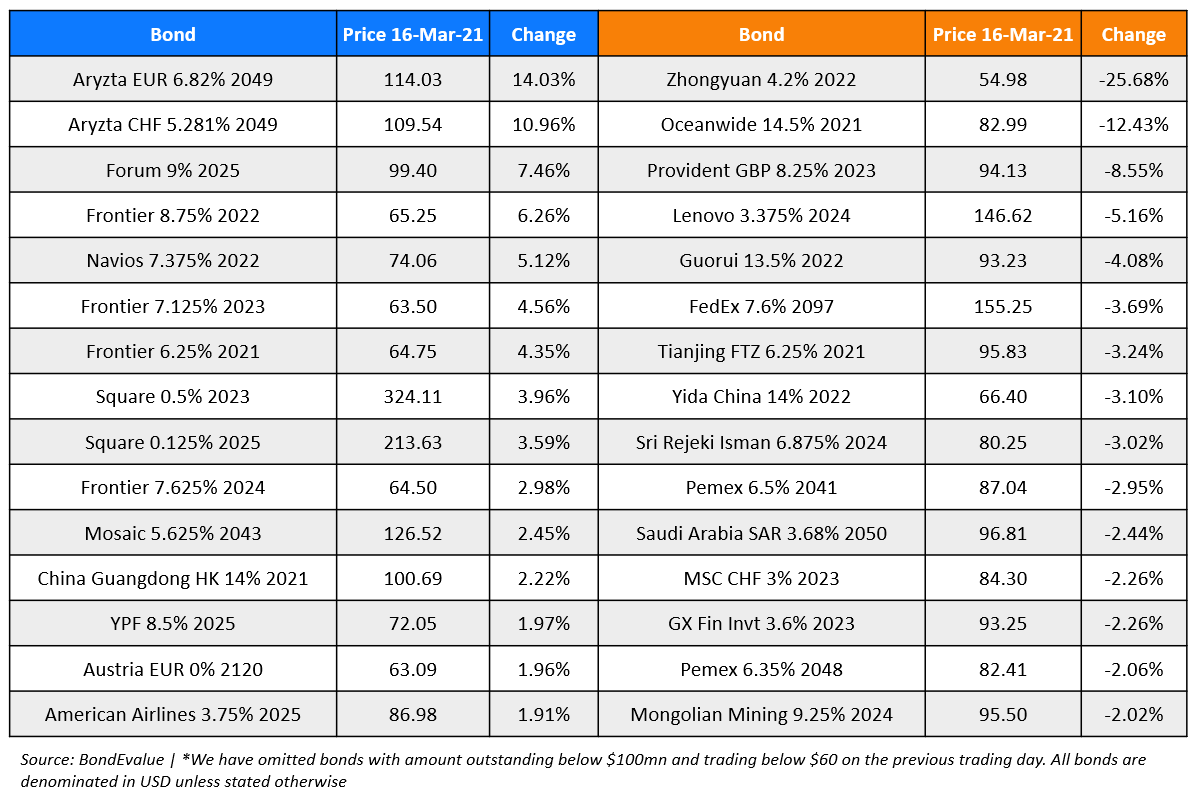 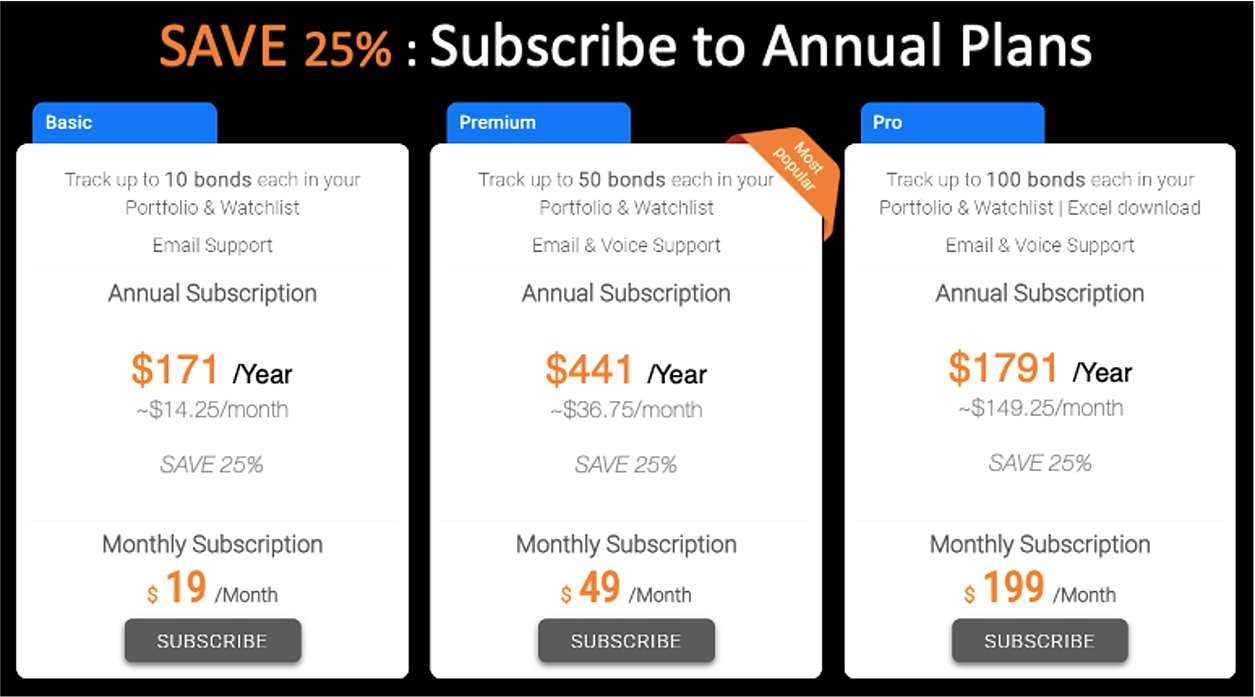