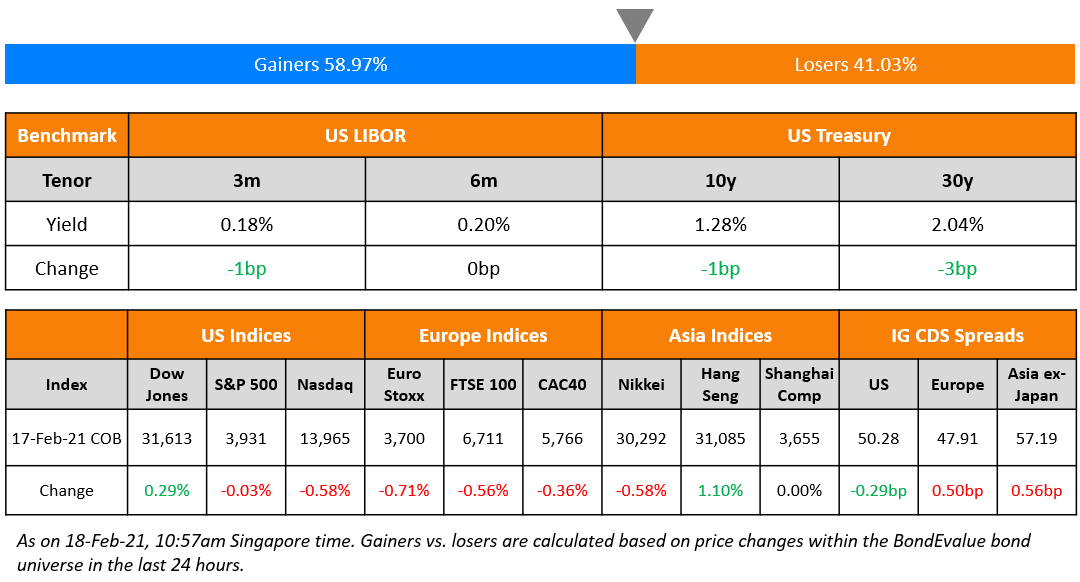 S&P closed flat while Nasdaq underperformed, down 0.6% as the flow towards tech ebbed. Companies with bloated valuation metrics fell over 2% while major tech companies like Apple and Netflix were down over 1%. US 10Y Treasury yields also shared the sentiment as yields eased slightly to 1.28%. Macro data came in better with US retail sales up 5.3% in January, the highest in seven months and the first monthly increase in four months and the second round of stimulus checks being spent cited as the primary reason. European indices moved similar to Wall Street, down ~0.3% with German Bund yields also easing 2bp to -0.37%. US IG CDS spreads were 0.3bp tighter and HY was 0.7bp wider. EU main CDS spreads widened 0.5bp and crossover spreads widened 2.6bp. Asian equity markets have started mixed to slightly softer, down 0.3% while Asia ex-Japan CDS spreads are 0.6bp wider. Asia ex-Japan primary markets are seeing the first dollar bond deal since last Wednesday with Ping An Insurance’s $250mn 10Y bond launched this morning.

LQD, the second biggest US credit ETF saw short interest jump to the highest level since March last year, when financial assets sold off on pandemic fears, as reported by Bloomberg.

“With the economy still far from those goals, participants judged that it was likely to take some time for substantial further progress to be achieved,” according to minutes. “Participants remarked that the prospect of an effective vaccine program, the recently enacted fiscal support, and the potential for additional fiscal actions had led them to judge that the medium-term outlook had improved,” according to the minutes. “That said, participants agreed that the economy remained far from the Committee’s longer-run goals and that the path ahead remained highly uncertain, with the pandemic continuing to pose considerable risks to the outlook.”

“Many participants stressed the importance of distinguishing between such one-time changes in relative prices and changes in the underlying trend for inflation,” the minutes said. Such moves“could temporarily raise measured inflation but would be unlikely to have a lasting effect.”

“My overall take on QE is still that it is a tried and tested tool,” Ramsden said. “For me it is the marginal monetary policy tool at present.”

“We expect global government debt to increase by another $10 trillion this year and surpass $92 trillion.” “Political and social pressure could limit governments’ efforts to reduce deficits and debt, jeopardizing their ability to cope with future crises.” “This could also constrain policy responses to mitigate the adverse impacts of climate change and natural capital loss,” it added.

“The bear case is that spreads are about as tight as they have been in some time and that rates will rise,” said Samana. “The bull case, which has meager returns, is that everything remains constructive for credit, and you clip a couponthat’s getting ever smaller. To sum up, there’s a weak reward if all goes right, and what could be a good bit of downside, especially if rates jump sharply or the reopening gets interrupted.”

“This means the economy is on the mend; so it’s not unhealthy that real yields are rising,” said Holman. “But I caution that if real yields rise too quickly, then that’s a problem for all asset classes. It’s the speed of the change that could be a worry.”

“The rise in real yields is important and shows that in many ways the true cost of capital is increasing,” Jones said. “The movement is a reflection of the fact that the economy is doing better, the recovery is going faster than expectations and that we have the stimulus and the vaccine roll out.”

“It’s an onus for investors to be cognizant about real yields,” said Pollack. The increase in real yields is “an omen for the future that interest rates could rise
further.”

“Even though U.S. Treasury yields are rising, the higher spreads in Asian high-yield credit will provide more of a cushion against rising rates,” said Schubert. “However, a disorderly increase in UST yields is probably not salutary for credit overall.” 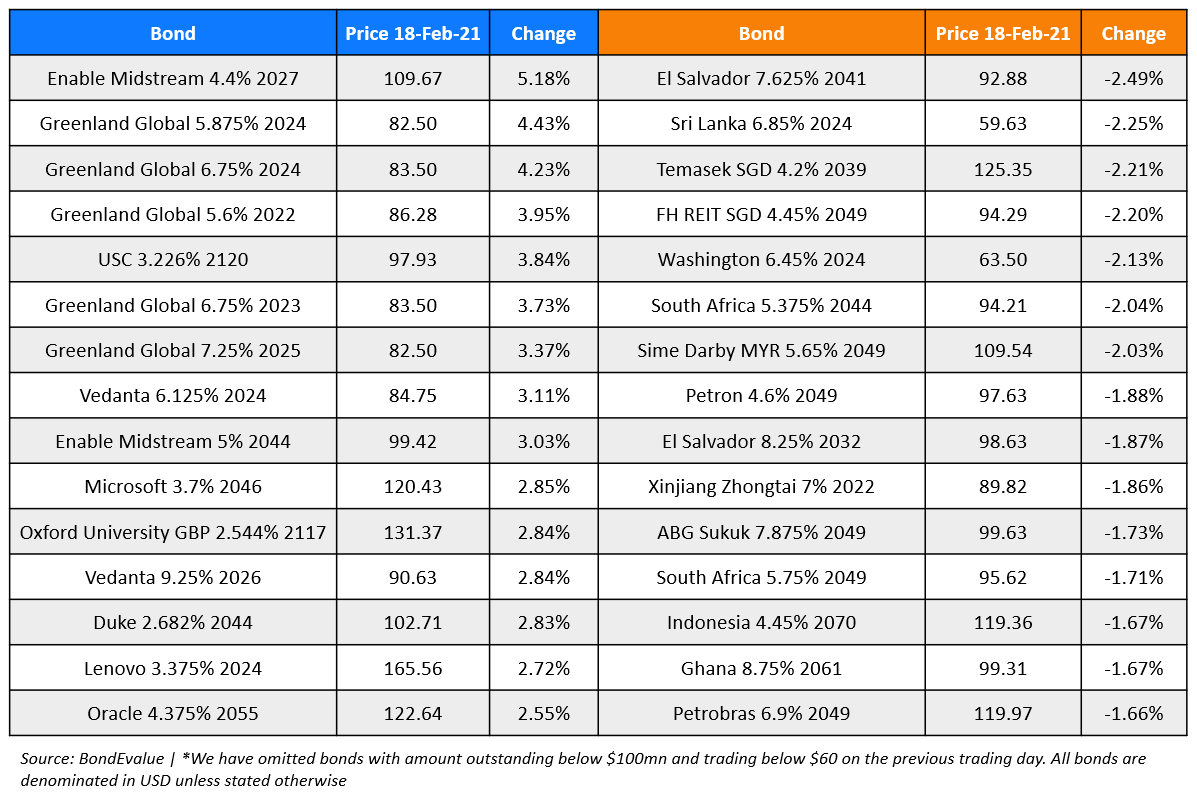