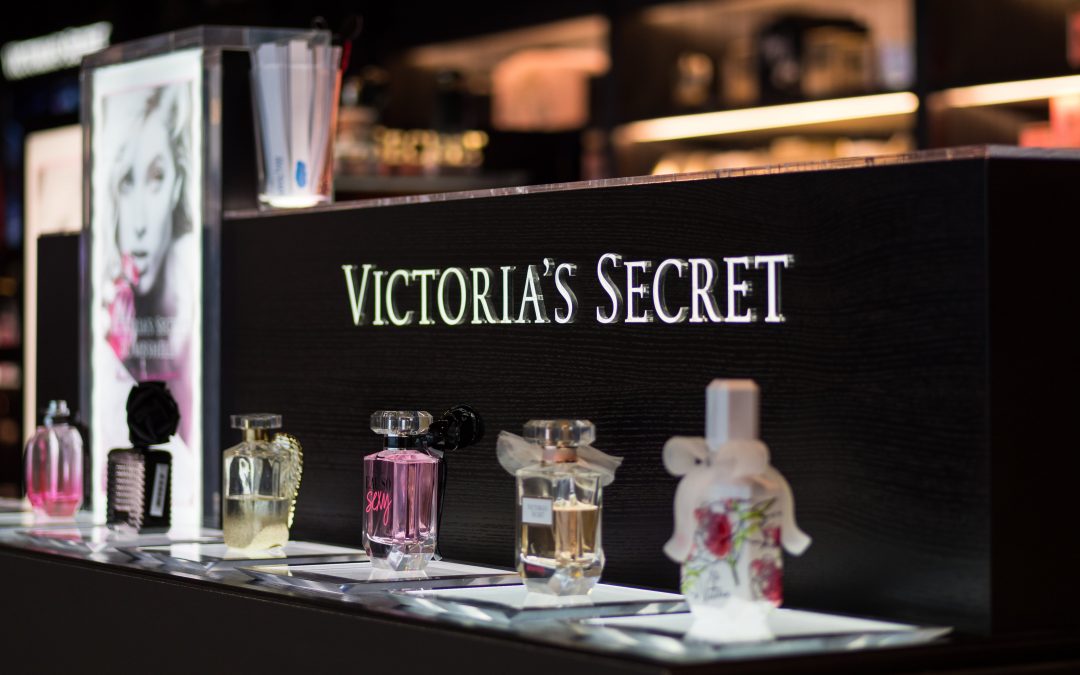 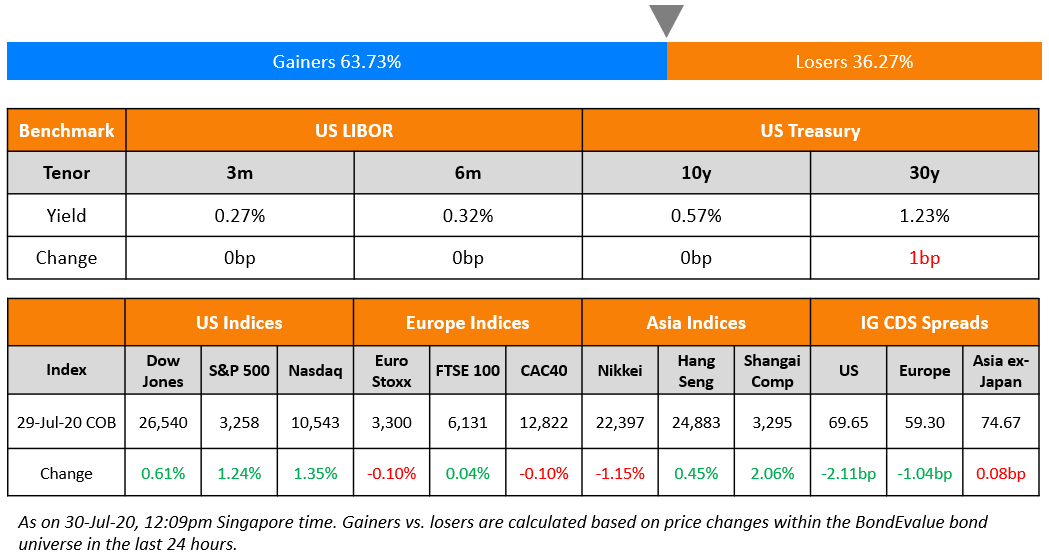 Wall Street gained overnight after reassuring comments from Fed Chair Jerome Powell that the Fed would use its “full range of tools” to keep interest rates at near zero for as long as necessary given that the upturn in coronavirus cases and the following reimposed lockdown restrictions “are starting to weigh on economic activity”. These comments helped ease some of the growing concerns over the next aid package that US lawmakers are still trying to iron out. US treasury yield curve steepened a tad with 2Y and 10Y yields easing 1-2bp and 30Y firming 1bp. Europe and US CDS spreads tightened by a few basis points. Asian markets are set for a risk on start this morning with most markets up around 1%. 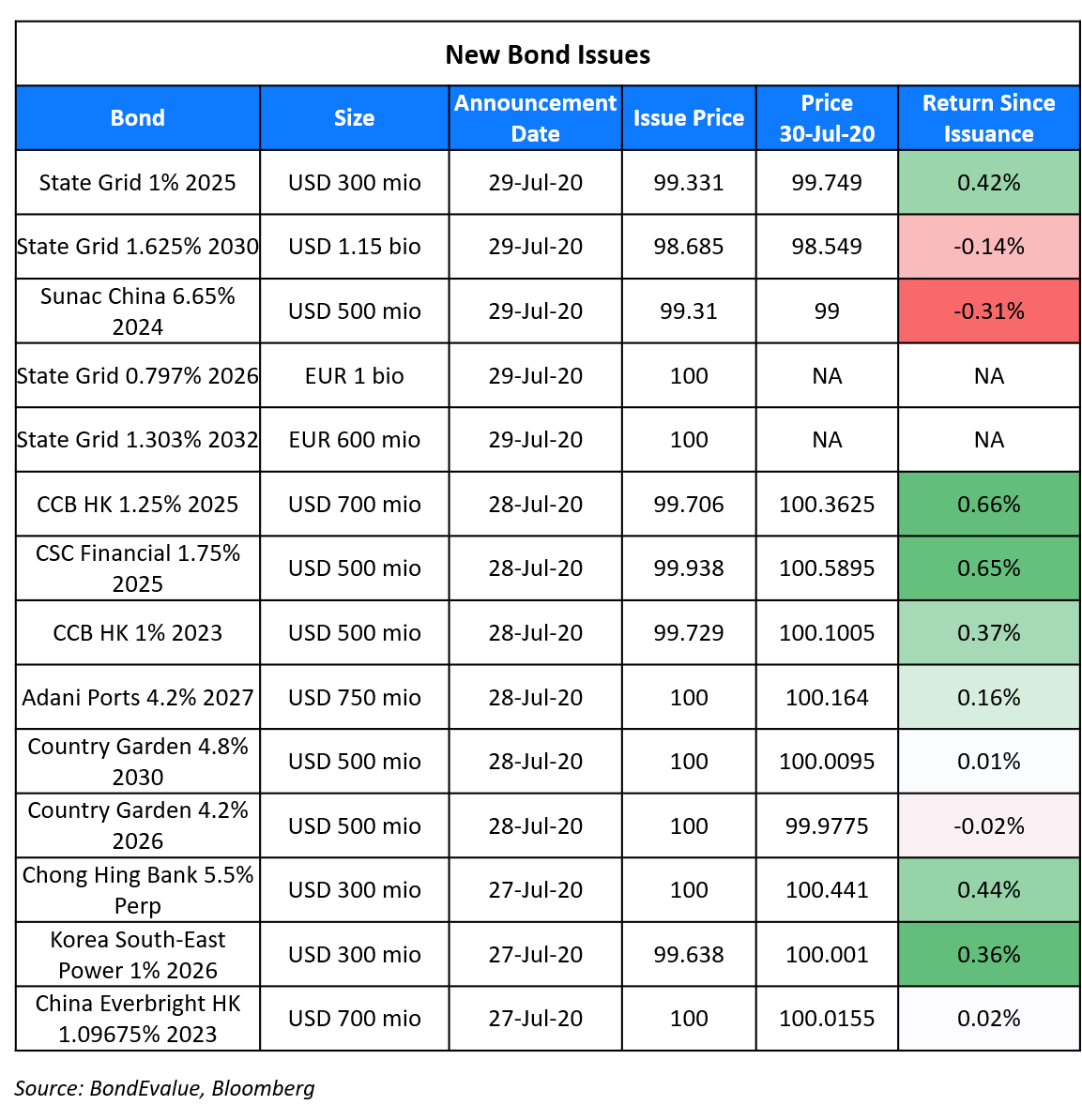 State Grid Corp of China raised a total of $3.05bn from two dual-tranche dollar and euro bond deals. It raised:

The bonds have expected ratings of A+/A+. State Grid Overseas Investment (2016) is the issuer under the programme and the state-owned parent company is the guarantor.

American fashion retailer, L Brands announced preliminary second quarter earnings, cost cutting measures and recommitted to separating Victoria’s Secret (VS) and Bath & Body Works (BBW) into standalone companies. BBW’s revenues are expected to rise by 10%, VS’s revenues are expected to fall by 40% and total net sales are expected to fall by 20% compared to the same quarter last year. This beat estimates of a ~26% decline in total net sales. The company also said it expects annualized cost reductions of $400mn, which includes plans to cut its headcount at its headquarters by 15% or 850 employees. The news was well received by Wall Street as JP Morgan analysts upgraded the company’s stock to overweight with a target price of $32. L Brands’ stock skyrocketed over 35% to close at $25.9 on Wednesday while its bonds traded higher by ~4-10 points on the secondary markets this morning. 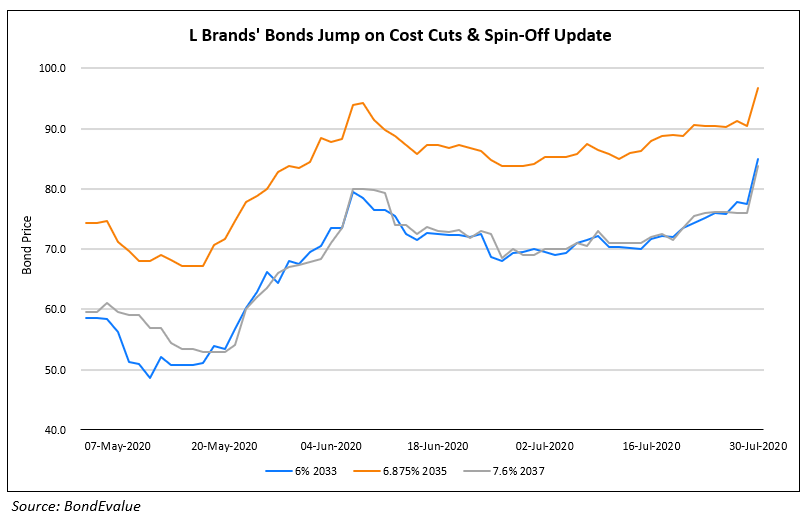 Bonds of Europcar Mobility Group plunged after the announcement of second quarter earnings. The travel and leisure industry has been one of the worst hit due to the current pandemic. As per the European Travel Commission forecast, European inbound travel would recover to its 2019 levels only by 2023. In light of the uncertainties, the company’s current capital structure is under tremendous stress. The Q2 earnings reflected the full impact of lockdowns with revenues down 69% compared to the last year. The EBITDA for the first half stood at negative ‎€(286)mn against ‎€82mn last year, while operating cash flow stood at negative €(296)mn.

Europcar is also looking out for a suitable suitor for its business. The company had a market value of €321mn and a reported debt of more than €1bn as of end March. On July 27, investment firm Eurazeo had asked bidders to submit bids in September for the French car rental firm so that it can avoid a debt restructuring procedure. Volkswagen, which is also the previous owner of the company, and private equity firms including Apollo Global Management Inc have indicated their interests in the deal. Volswagen had sold Eurpcar to Eurazeo SE in 2014 for €3.32bn. While Volkswagen’s interest in the company includes the discounted valuation and the access to Europcar’s service location business, the private equity players would be more interested to invest as a part of a distressed deal. American counterpart, Hertz was also forced to file for bankruptcy due to the loss of business amid the pandemic. The bonds of Euroocar dropped to more than half their price in March after the pandemic shock. The bonds recovered by ~80% by July as lockdowns eased. However, these plunged by ~28% over the last two days in reaction to the earnings and Eurazeo’s intent to sell. The 4.125% bonds maturing in Nov 2024 traded at 58.3 cents on the dollar, down 7.78 points compared to yesterday’s close. 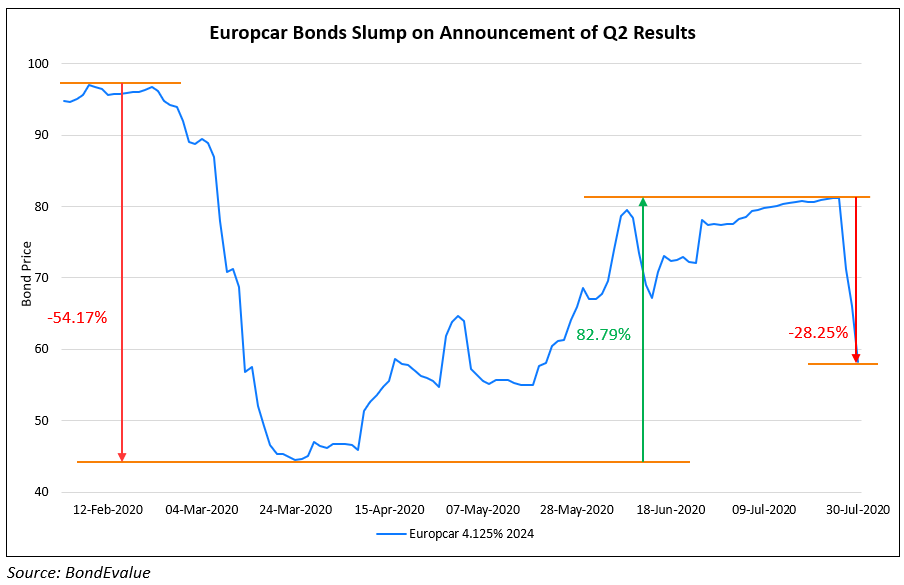 American household products company Tupperware saw its shares and bonds jump on better than expected second quarter earnings. The Orlando-based company reported sales of $397.4mn (est $316mn) and an earnings per share of $1.30 (vs. an expected loss). The strong earnings were on the back of cost cuts and gains on the retirement of debt and non-core assets, which were partially offset by restructuring costs. In its SEC filing, the company expressed concerns over “its ability to continue as a going concern” given the over $500mn of 4.75% bonds due next June. However, Sandra Harris, the chief financial officer said on the earnings call, “We are working with outside advisers to develop and evaluate options to satisfactorily address this indebtedness before its maturity next June.” The better than expected earnings and commentary pushed its stock higher by a massive 67.5% to $16.15 and its 4.75% bonds due 2021 up by 10.5% to 90.6 cents on the dollar.

Bank of China’s investment banking unit recently published a report urging Chinese banks to move away from using the Belgium-based SWIFT system for cross-border payments in a bid to prepare itself from potential sanctions from the US. Tensions between the two largest economies have been high for the past few months as the November 3 US presidential elections approach. The BOC International report was co-authored by its chief economist, Guan Tao, who was previously a director of the international payments department of State Administration of Foreign Exchange (SAFE). The report, which looked at potential actions the US could take against Chinese banks, wrote, “A good punch to the enemy will save yourself from hundreds of punches from your enemies. We need to get prepared in advance, mentally and practically.” The SWIFT system is the primary financial messaging service used by banks globally to make financial transactions. Other recommendations of the report included stopping the use of the US dollar as the anchor currency for foreign exchange controls.

In related news, the FT’s Izabella Kaminska wrote an interesting op-ed about how the US could potentially use antique Chinese bonds as a tool in its fight against China. The bonds in question are bearer bonds (Term of the day, explained below) issued by previous Chinese regimens between 1911 and 1937. These bonds, denominated in sterling, Swiss francs, Russian roubles, Deutsche marks or US dollars, were issued by the former Republic of China or the preceding Imperial Chinese state to raise money for big development and infrastructure projects. While the UK government under Margaret Thatcher managed to negotiate a settlement of £20m for British holders of these bonds, the US holders have not been paid. The American Bondholders Foundation (ABF) represents $1.6tn in claims for such bonds, stating that, “In accordance with the terms of the bond, successor government doctrine, and accounting standards, the United States can and should hold China accountable to its obligations.” The legal merit of these claims are debatable but speculators are taking an interest as the value of such bonds have traded up on ebay and specialist dealers.

The Monetary Authority of Singapore (MAS), on Wednesday asked local banks to restrict dividends for FY2020 at 60% of last year’s dividends paid. The regulator also called on the local banks, DBS, OCBC and UOB to offer shares instead of cash as dividends and suggested restraint in discretionary expenditure and management compensation. The MAS emphasized the strong capital position of local banks while suggesting that the dividend restrictions were a pre-emptive measure to bolster the resilience and capacity to support lending to businesses and individuals as well as to make the banks resilient to economic shocks in case the situation worsens due to the pandemic. The Federal Reserve, the European Central Bank and the Bank of England are among the major central banks that have taken similar measures amid the pandemic. Mr Ravi Menon, Managing Director, MAS said, “We are fortunate that banks in Singapore entered the COVID-19 pandemic with strong capital positions. All the same, MAS wants to ensure the banks’ capital buffers remain ample in the face of significant uncertainties ahead, so that they can sustain lending to the economy. We have carefully calibrated the restriction on dividends, taking into account the needs of investors who may rely on this income.”

A bearer bond is an unregistered debt security that could be issued by sovereigns or corporates. Unlike typical bonds, no records of the ownership or transactions are maintained for bearer bonds. The physical possessor of these bonds is the presumptive owner since there is no registered owner. Another difference is with respect to coupon payments. Coupons for bearer bonds are physically attached to the security so that the possessor can redeem these through an authorised agent. As with registered bonds, the bearer bonds are also negotiable and have a stated maturity date and coupon rate. The lack of legislation makes these bonds ideal instruments for tax evasion and money laundering. Such types of bonds were common in the 19th and 20th centuries and are no longer issued by the US treasury.

The path of the economy will depend significantly on the course of the virus. The ongoing public health crisis will weigh heavily on economic activity, employment, and inflation in the near term, and poses considerable risks to the economic outlook over the medium term. In light of these developments, the Committee decided to maintain the target range for the federal funds rate at 0 to 1/4 percent. The Committee expects to maintain this target range until it is confident that the economy has weathered recent events and is on track to achieve its maximum employment and price stability goals.

On the Effect of the Fed Policy on Treasury Yields

“With Treasury yields at or near record lows, there is less incentive to be involved in the market, and rates will likely remain trapped at low levels for some time.”

On the Indian Domestic Bond Market Compared to Peers

“Due to the events during Covid-19, we have unfortunately seen retrograde progression in the credit markets, funds buying non-AAA papers have suffered,” said Rahul Banerjee. “The US Fed showed the way when it stepped in to buy both bonds and Bond ETFs including Junk bonds, this was the pivotal move that restored investor confidence,” Banerjee said. “Transparency of prices is the lifeblood of a credit market,” Banerjee said. 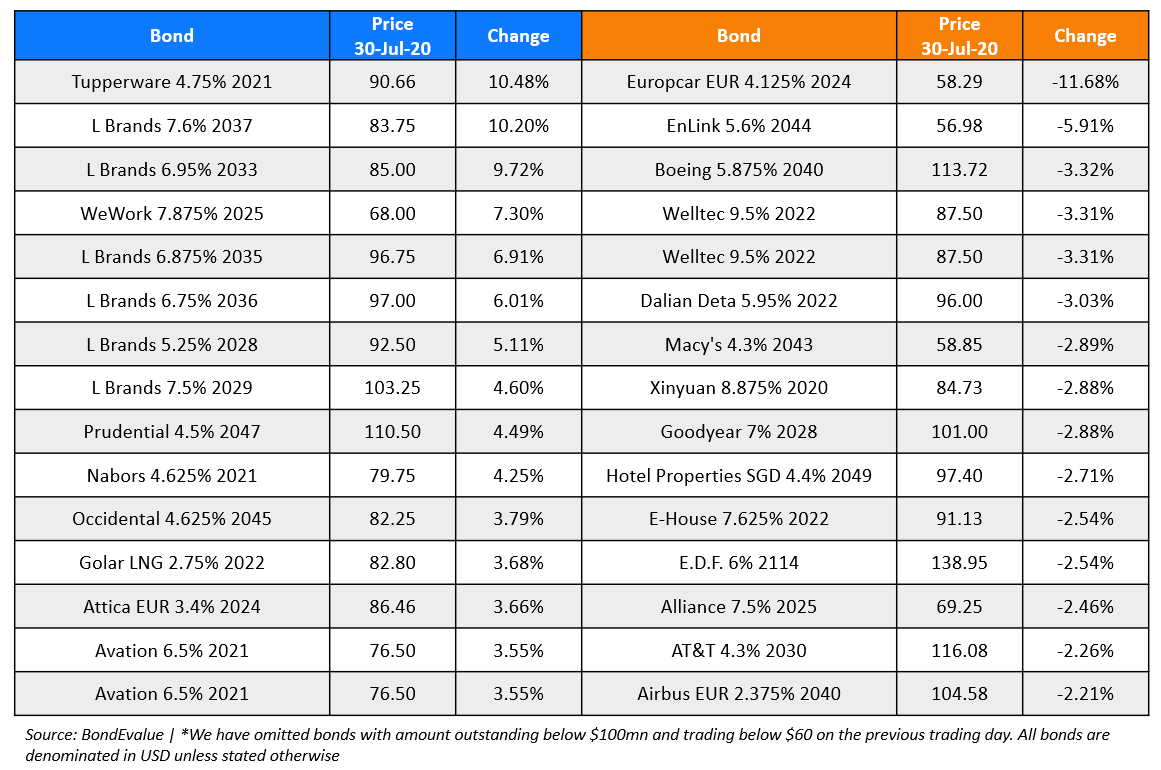