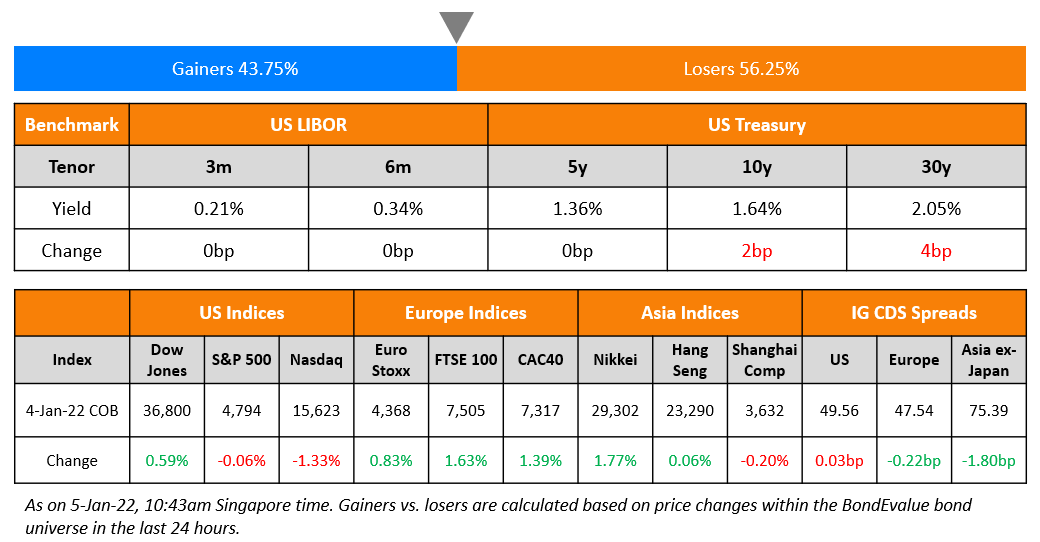 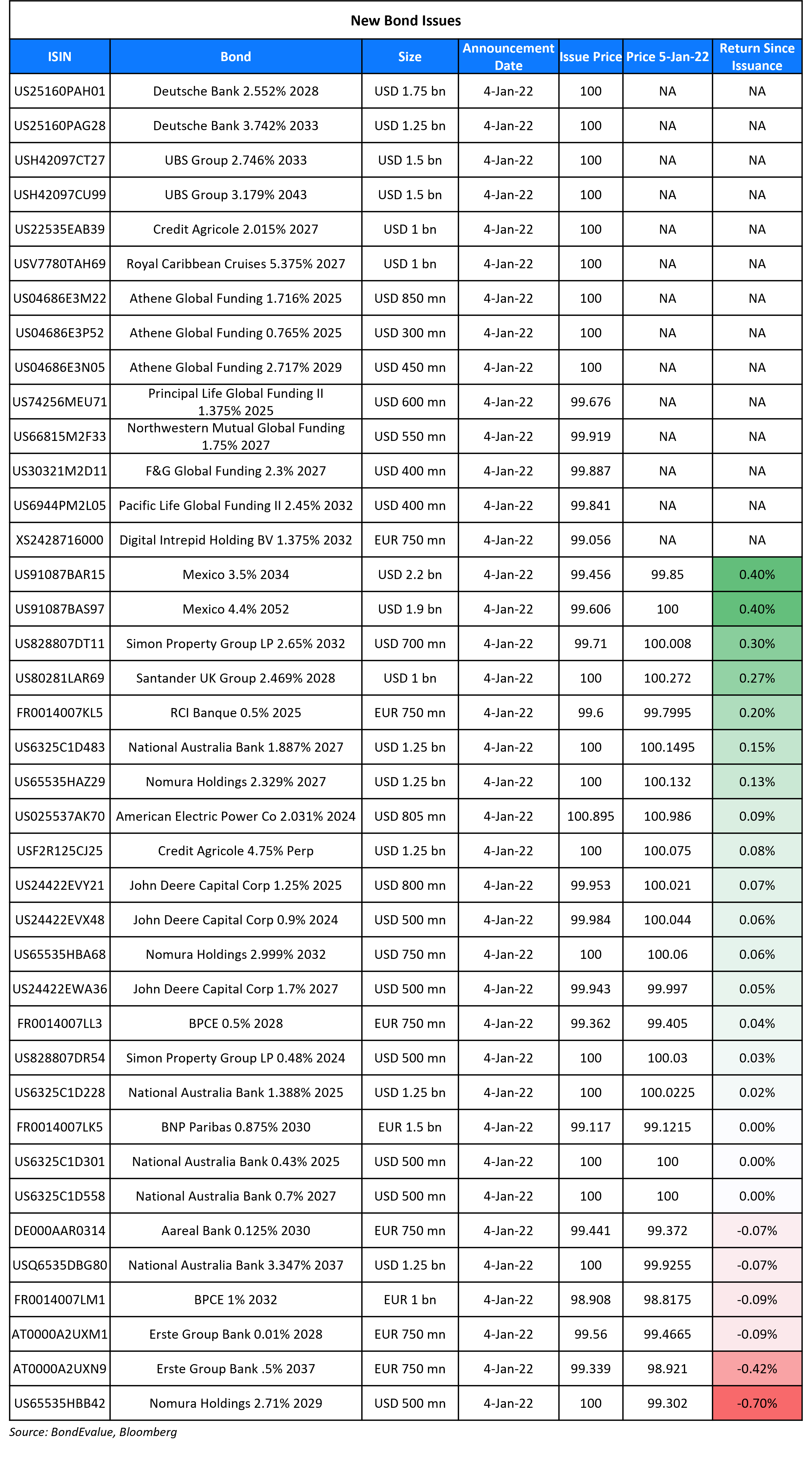 Credit Agricole raised $2.25bn via a dual-trancher. It raised:

Royal Caribbean raised $1bn via a 5.5Y bond at a yield of 5.375%, 12.5bp inside initial guidance of 5.5% area. The bonds have expected ratings of B (S&P). Proceeds will be used to repay principal payments on its bond due November 2022. Pending such uses, Royal Caribbean may temporarily apply the proceeds to repay borrowings under its revolving credit facilities or other borrowings. The new bonds offer a juicy new issue premium of 100.5bp vs. its existing ‘B’ rated 7.5% 2027s (issued in 1997) that currently yield 4.37%. The new bonds also priced 23.5bp wider than its 5.5% 2028s issued in March 2021 that yield 5.14% despite its shorter tenor.

Nomura raised $4.75bn via a three-tranche deal. It raised:

The bonds have expected ratings of Baa1/BBB+ (Moody’s/S&P). The issuer plans to use proceeds for loans to its subsidiaries, including Nomura Securities, which will use such funds for their general corporate purposes.

National Australia Bank raised $4.75bn via a five-tranche deal. Details are given in the table below:

Haircut refers to a reduction in value of an asset for the purpose of calculating either margin requirements, level of collateral or salvage value. The haircut is generally stated as a percentage and is the difference between the value of the asset and its reduced value. For example, in a restructuring, if a bond worth $100mn faces a haircut of 20%, then holders would receive only $80mn. In the case of a loan, if the collateral is worth $100mn, a haircut of 30% would imply that a loan of $70mn, giving the lender a cushion in case the market value of the collateral falls. Garuda is offering investors a haircut of 81 cents on the dollar.

“I think the bond market is already showing enough of a recession indicator that by 2023 it’s seems pretty likely. And I, like I said earlier, I don’t think a lot of Fed officials, economists and investors appreciate the fact the economy keeps buckling at lower and lower interest rates. So I think the Fed only has to raise rates four times and you’re going to start seeing really a plethora of recessionary signals. I think it’s certainly a non-zero probability that you get a recession in the latter part of 2022. That’s going to be dependent again on how aggressive the Fed is. One thing that we did notice in 2018 is the Fed stopped QE, they started quantitative tightening — letting the bonds roll off. And then they started raising interest rates and we got an instantaneous bear market.”

On the outflow of over $1 billion from Treasury Bond ETF as treasury yields rise – Peter Chatwell, head of multi-asset strategy at Mizuho International

“With the consensus view being higher equities and higher long-term bond yields, the market is now pricing that.” “TLT (the iShares 20+ Year Treasury Bond ETF) is unlikely to perform well unless or until risk appetite turns sour.” “When the outlook for equities is more balanced, then the relative income in equities compared to bonds will matter a lot more,” Chatwell said. “At that point, TLT will have upside — but before then, it will be tough to generate a positive return.” 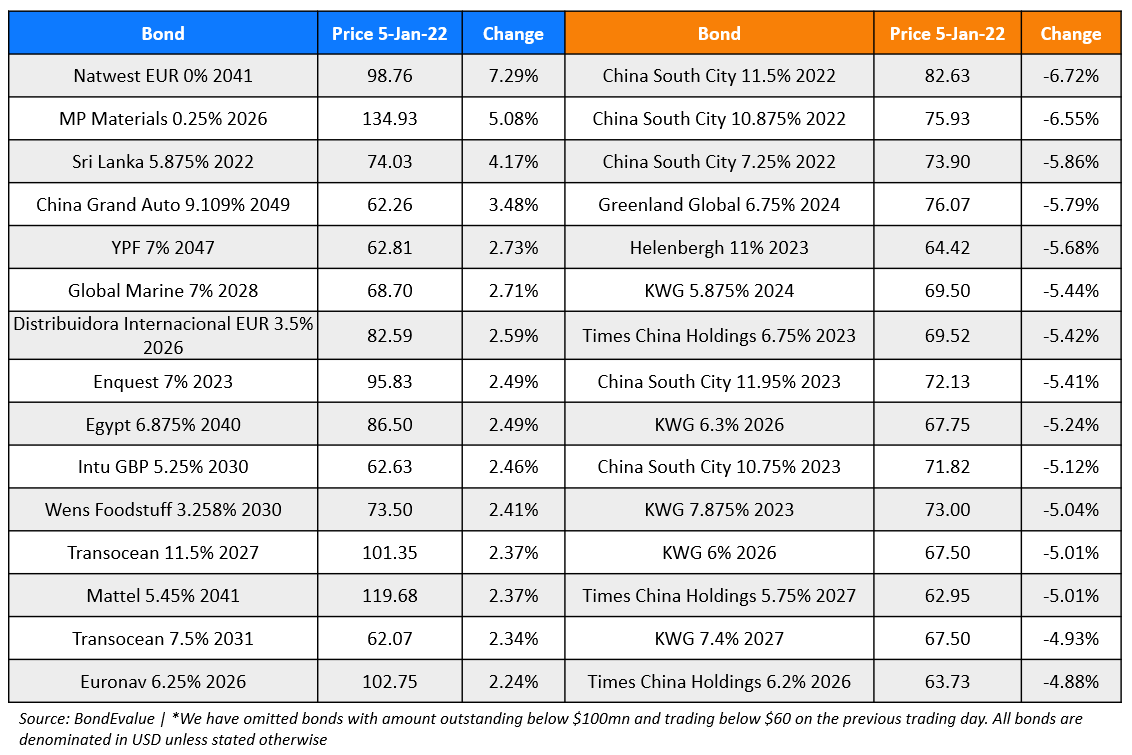