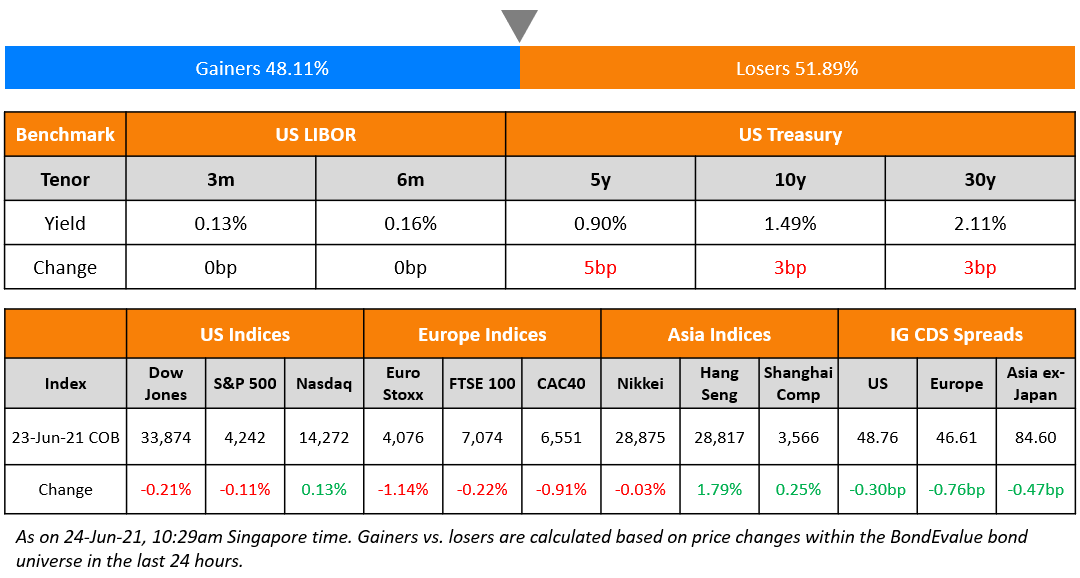 US Markets continued to hover close to record-highs with the S&P slightly lower by 0.1% while Nasdaq was up 0.1% at an all-time high. Consumer Discretionary was up 0.6% while Financials and Energy were up 0.3%, providing support to the indices that were weighed down by other sectors. Preliminary Markit Purchasing Managers’ Index (PMI) US manufacturing rose to 62.6 this month vs. estimates of 61.5. US 10Y Treasury yields were 3bp higher at 1.49%. European markets reversed the gains and closed lower – DAX, CAC and FTSE were down 1.2%, 0.9% and 0.2% respectively. US IG and HY CDS spreads tightened 0.3bp and 0.8bp respectively. EU main and crossover CDS tightened 0.8bp and 4.8bp respectively. Saudi TASI was largely flat while Abu Dhabi’s ADX was down 0.1%. Brazil’s Bovespa closed 0.3% down. Asian markets opened cautiously – HSI and Singapore’s STI up 0.2%, Shanghai up 0.1%, Nikkei broadly flat. Asia ex-Japan CDS spreads were 0.5bp tighter. 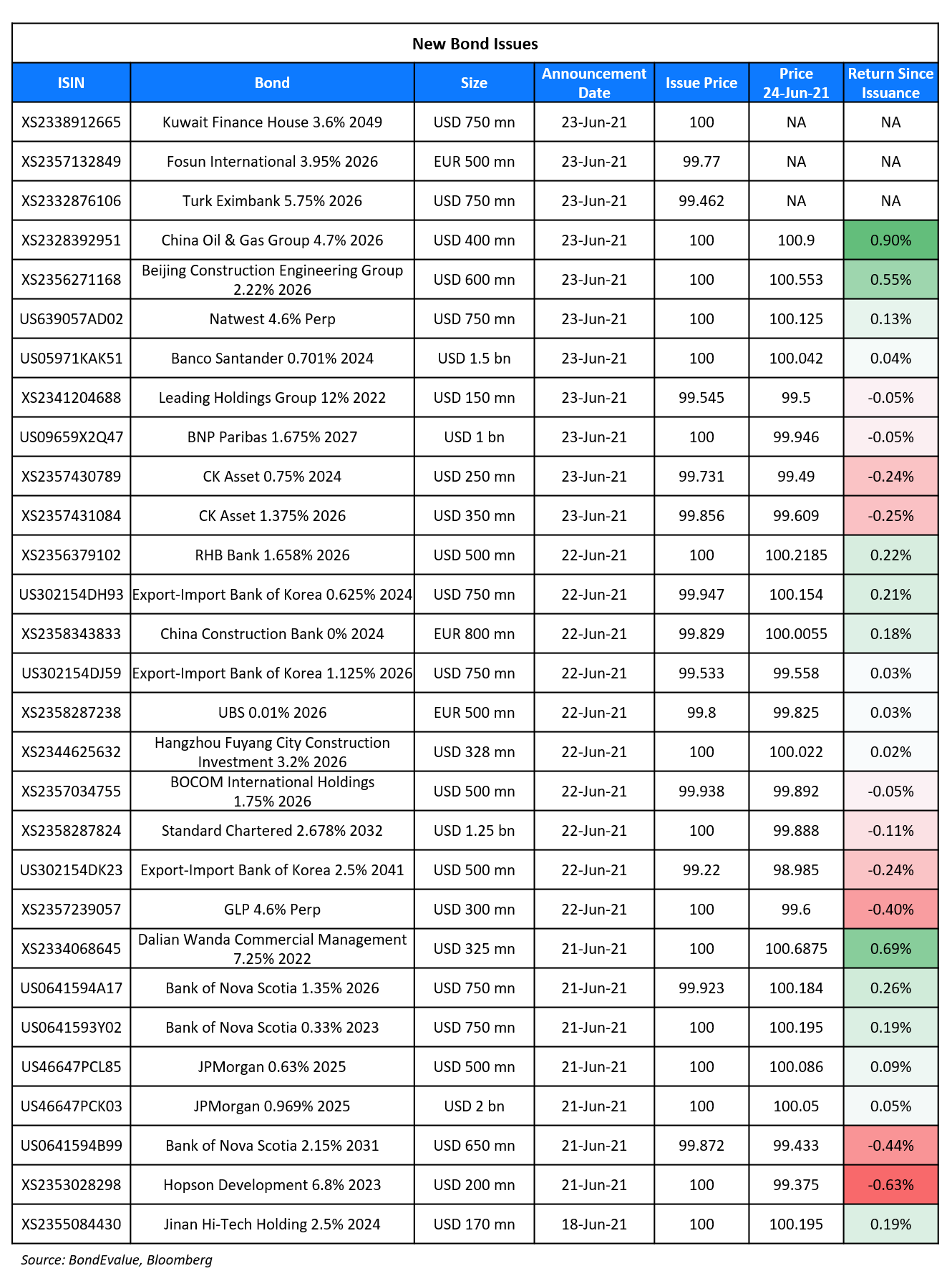 NatWest raised $750mn via a Perpetual non-call 10.5Y (PerpNC10.5) AT1 bond at a yield of 4.6%, 52.5bp inside initial guidance of 5.125% area. The bonds have expected ratings of Ba2/B+/BBB-. The first call date is June 28, 2031 and the coupons are fixed until the first reset date of December 28, 2031. If not called by the first reset date, the coupon re-fixes on each reset date to the 5Y US Treasury yield + initial margin of 310bp. The trigger event would occur at any point in time when the fully loaded CET1 Ratio of the Group is less than 7%. NatWest’s CET1 ratio as of 1Q2021 stood at 18.2%. Proceeds will be used for general corporate purposes and to strengthen further the capital base or the capital base of subsidiaries and/or the Group.

Kuwait Finance House raised $750mn via a PerpNC5.5Y AT1 Sukuk at a yield of 3.6%, 40bp inside initial guidance of 4% area. The bonds are unrated. The issuer is KFH Tier 1 Sukuk Ltd and the obligor is Kuwait Finance House KSCP and is rated A2/A+. The first call date is June 30, 2026 and the first reset date is December 30, 2026 and every five years thereafter. If not called by the first reset date, the coupon resets to the 5Y Treasury yield + margin of 262.9bp.

BNP Paribas raised $1bn via a 6Y non-call 5Y (6NC5) green bond at a yield of 1.675%, 25bp inside initial guidance of T+105bp area. The bonds have expected ratings of Baa1/A-. Proceeds will be used from time to time to the financing and/or refinancing, in whole or in part, of Eligible Green Assets as defined and further described in the BNP Paribas Green Bond Framework dated Sep 2020.

Banco Santander raised $1.5bn via a 3NC2 bond at a yield of 0.701%, 20bp inside initial guidance of T+65bp area. The bonds have expected ratings of A2/A/A. Proceeds will be used for general corporate purposes.

Turk Eximbank raised $750mn via a 5Y bond at a yield of 5.875%, a strong 62.5bp inside initial guidance of 6.5% area. The bonds have expected ratings of B2/B+. Proceeds will be used for general corporate purposes.

Leading Holdings Group raised $150mn via a 364-day note at a yield of 12.5%. The bonds are unrated. Proceeds will be used for general corporate purposes.

Beijing Construction Engineering Group (BCEG) raised $600mn via a 5Y bond at a yield of 2.22%, 45bp inside the initial guidance of T+180bp area. BCEG (HongKong) is the issuer with BCEG as the guarantor. The bonds have an expected rating of BBB and received orders of over $4.6bn, 7.7x the issue size. Proceeds will be used for offshore debt refinancing.

Fitch Revises Outlook on Dai-ichi Life to Positive; Affirms IFS at ‘A+’

Final price guidance (FPG) refers to a stage of a new bond issuance that is after the initial price guidance (IPG), but before the final pricing. At the FPG stage, the yield is generally lower or tighter than the initial proposed yield. In some cases, final pricing may be lower than the FPG stage if investor demand allows for further tightening. For example, the BOCOM International Holdings new issue was launched on Wednesday at an IPG of T+130bp area, with an FPG later announced at T+90bp, which is 40bp tighter (lower than) the IPG. The final pricing came at T+90bp, in line with the FPG.

On the risk of US debt default and new financial crisis without debt limit hike – Janet Yellen, US Treasury Secretary

Defaulting on US government debt obligations “would precipitate a financial crisis, it would threaten the jobs and savings of Americans at a time when we’re still recovering from the COVID pandemic,” Yellen said. “I would plead with Congress to simply protect the full faith and credit of the United States by acting to raise or suspend the debt limit as soon as possible.” “We can’t tolerate any chance of defaulting on the government debt, and there is a lot of uncertainty. It’s possible that we could reach that point while Congress is out in August, and I would really urge prompt action on raising the limit or suspending it.”
On the possibility of Fed taper starting in 2022 – Robert Kaplan, Dallas Fed President
“As we make substantial further progress, which I think will happen sooner than people expect — sooner rather than later — and we’re weathering the pandemic, I think we’d be far better off, from a risk-management point of view, beginning to adjust these purchases of Treasuries and mortgage-backed securities.” “If we do these purchases longer than might be necessary, for me it actually may reduce our flexibility in adjusting rates.” “I’d rather start tapering, assuming we meet our conditions, sooner rather than later so that we have more flexibility in deciding what we want to do on rates down the road.”
“I think it’s a good thing for the Fed to emphasize that we’re vigilant and we’re committed to anchoring inflation at an average of 2% and that we’re committed to anchoring inflation expectations in a manner that’s consistent with 2% inflation,” Kaplan said. “I think just emphasizing that is probably a healthy thing.” “If your workforce growth is slowing or decelerating, you’ve got to try to improve worker adaptability and improve productivity, and education has got to be central to that.”
On the possibility that the ‘temporary’ inflation surge may last longer than expected – Raphael Bostic, Atlanta Fed President
“Given the upside surprise in recent data points I pulled forward my projection.” “Temporary is going to be a little longer than we expected initially … Rather than it being two to three months it may be six to nine months.”
On China’s debt reckoning hammering ‘too big to fail’ borrowers
Jeffrey Chwieroth, professor of international political economy at the London School of Economics and co-investigator at the Systemic Risk Centre
“The government has grown more comfortable with defaults, even important regional state firms, but Huarong and Evergrande present much bigger and more systemic challenges.” “Deleveraging and eliminating the prevalence of government guarantees may induce undesirable consequences and market panic.”
Michael Pettis, a Beijing-based professor of finance at Peking University
“The problem with too big to fail is that it can quickly turn into too big to save.” “China has since the financial crisis maintained stability by repressing risks. It can’t do that forever.”
On Asian high-yield debt valuations attractive – Shilpa Singhal, portfolio manager and senior credit analyst at NN Investment Partners
“Asia HY might almost be a safe haven. Yes there are credit events, they need to be navigated carefully, there needs to be a lot of good credit selection.” “Asia HY is in the very fortunate position of being a very short duration asset class. It is not very interest-rate sensitive at all.” 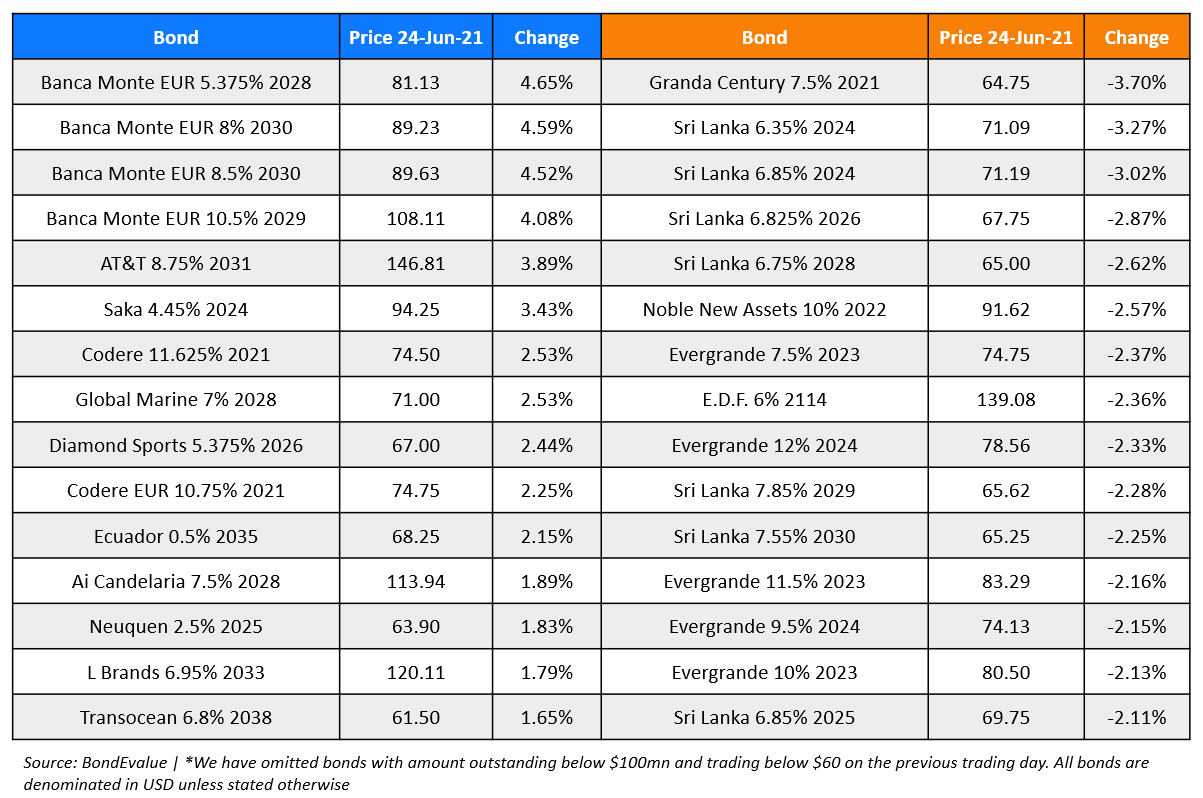