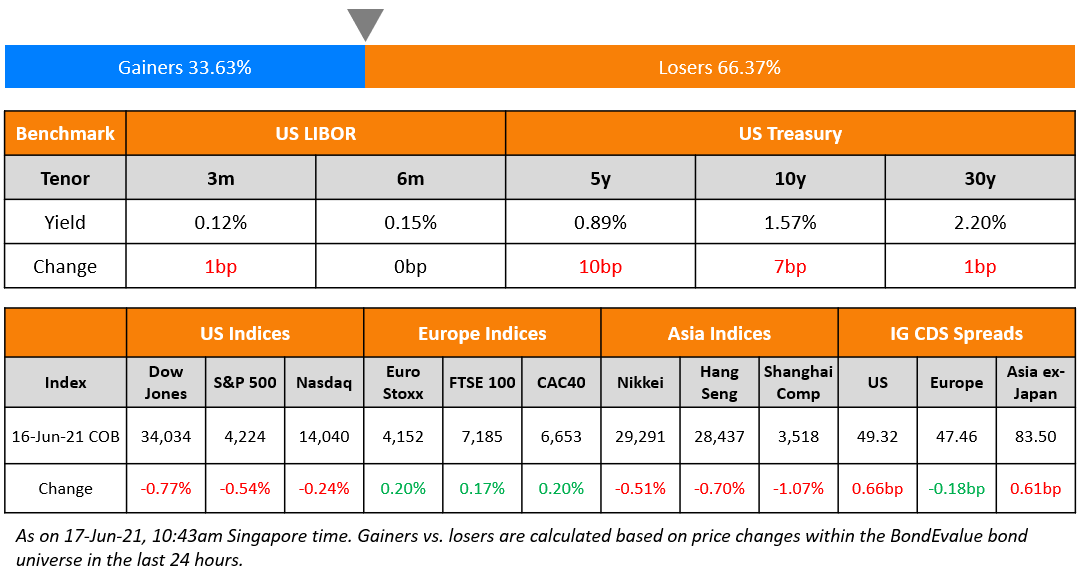 US markets fell after the Fed revealed that it expects interest rates to rise earlier than expected (details below). S&P and Nasdaq were down 0.5% and 0.2% respectively.  All sectors with the exception of Consumer Discretionary were in the red. Materials, Consumer Staples and Industrials, down ~1%, led the slide. US 10Y Treasury yields shot up 7bp to 1.57%, its highest in a week. European markets remained cautious – DAX was down 0.1% while CAC and FTSE were up 0.2% each. US IG and HY CDS widened 0.7bp and 4.8bp respectively. EU main and crossover CDS tightened 0.2bp and 1.6bp respectively. Saudi TASI was up 0.2% and Brazil’s Bovespa was down 0.3%. China’s factory output lagged for a third straight month in May after Guangdong saw an increase in the number of Covid-19 cases. Industrial production rose 8.8% in May vs. 9.8% last month and against expectations of 9.0%. Asian markets have started cautious with Shanghai flat and HSI down 0.4%. Asia ex-Japan CDS spreads were 0.6bp wider. 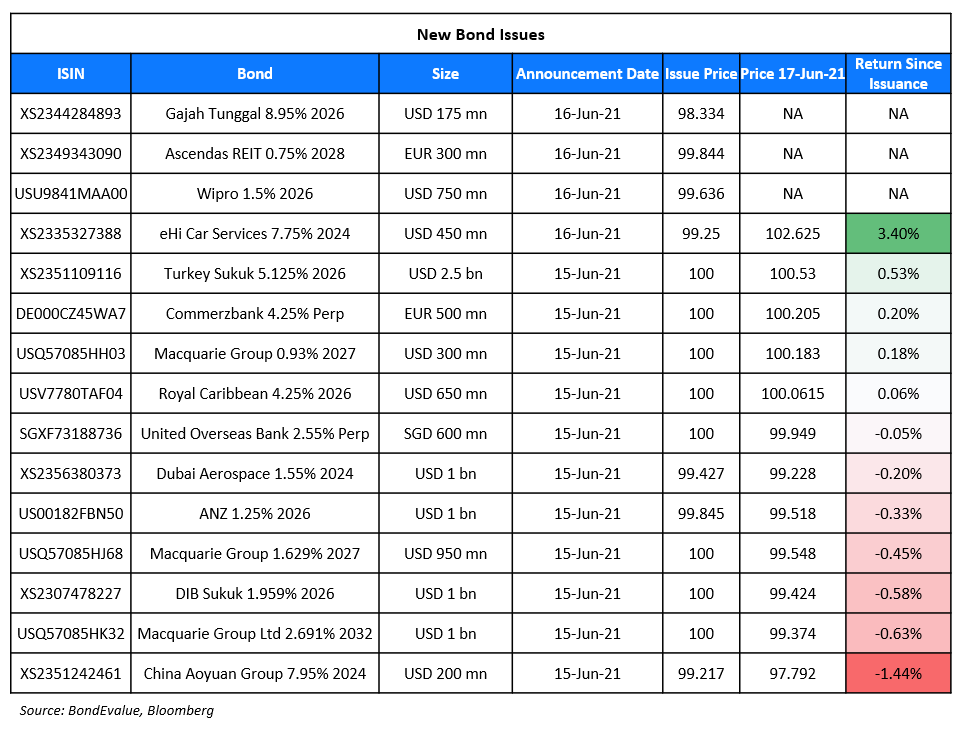 Fantasia Group raised $200mn via a 3Y Reg S bond at 14.5%. Proceeds will be used for offshore debt refinancing, including to fund a tender offer for its $400mn 7.375% 2021s at $1,000 plus accrued and unpaid interest per 1,000 in principal. The deadline is June 28. Fantasia said the tender offer is part of its policy to actively manage its balance sheet liabilities and optimise its debt structure.

Indian IT major Wipro raised $750mn via a 5Y Yankee bond at a yield of 1.576%, 30bp inside initial guidance of T+110 area. The bonds have expected ratings of A-/A-, and received orders over $1.85bn, ~2.5x issue size. US bought 54% of the bonds, Asia bought 24% and EMEA 22%. Fund/asset managers got 58%, pension funds/insurance companies got 19%, central banks/sovereigns/supras 17% and banks/private banks/others 6%. Wholly owned US-based subsidiary Wipro IT Services is the issuer and the parent company is the guarantor. Proceeds will be used to refinance debt, and for general corporate purposes. The bonds were priced ~10bp lower than peer HCL’s 1.375% 2026s that yield 1.67%. IFR notes that similar to HCL’s bond, the ratings are higher than the sovereign as they are issued through wholly owned US-based subsidiary Wipro IT Services, with a guarantee from the parent company, subject to a country ceiling of AAA from Fitch.

The Fed dot plot is a visual representation of interest rate projections of members of the Federal Open Market Committee (FOMC), which is the rate-setting body within the Fed. Each dot represents the Fed funds rate for each year that an anonymous Fed official forecasts. The dot plot was introduced in January 2012 in a bid to improve transparency about the range of views within the FOMC. There are usually 19 dots for each year, but depending on the vacant positions at any point in time, may be lesser.

On the new Fed dot plot showing projections of two rate hikes by end 2023
Jerome Powell, Federal Reserve Chairman
“The economy has clearly made progress.” “You can think of this meeting as the talking-about-talking-about meeting, if you like.” “The dots should be taken with a big grain of salt.” “As the reopening continues, shifts in demand can be large and rapid, and bottlenecks, hiring difficulties and other constraints could continue to limit how quickly supply can adjust — raising the possibility that inflation could turn out to be higher and more persistent than we expect,” Powell said. “I am confident that we are on a path to a very strong labor market.” “We learned during the course of the last very long expansion, the longest in our history, that labor supply during a long expansion can exceed expectations.”
Thomas Costerg, senior U.S. economist at Pictet Wealth Management
“It’s a hawkish surprise.” “We are looking at a Fed that seems positively surprised by the speed of vaccinations and the ongoing withdrawal of social-distancing measures.”

“The new Fed ‘dot plot’ indicating that the median FOMC member now forecasts two Fed rate hikes in 2023, versus none in the March iteration, represented the hawkish surprise out of the June Fed meeting.”
According to analysts at JPMorgan
“It appears that faster progress toward reopening and higher inflation surprises revealed some hawks on the FOMC, but we suspect that leadership is predominantly anchored at zero or one hike in 2023.” “We continue to look for lift-off in 2023, with tapering starting early next year.”
On US government bond yields rising after Fed decision
Thomas Simons, an economist at Jefferies
“Taken all together, there is a much more hawkish tone than any Fed communication that we’ve seen from the consensus,” in a very long time.”
Rob Daly, director of fixed income at Glenmede Investment Management
“While the market may not like a moderately hawkish tone, it is the right thing to do and is still incredibly accommodative,” he said. “Tapering is not raising rates.”
Scott Ruesterholz, portfolio manager at Insight Investment
“It is important to remember that we are debating when the Fed will begin tapering or slowing the pace of its balance sheet growth,” he wrote. “We are still multiple years away from even discussing modest reductions in the size of the Fed’s balance sheet in our view.” 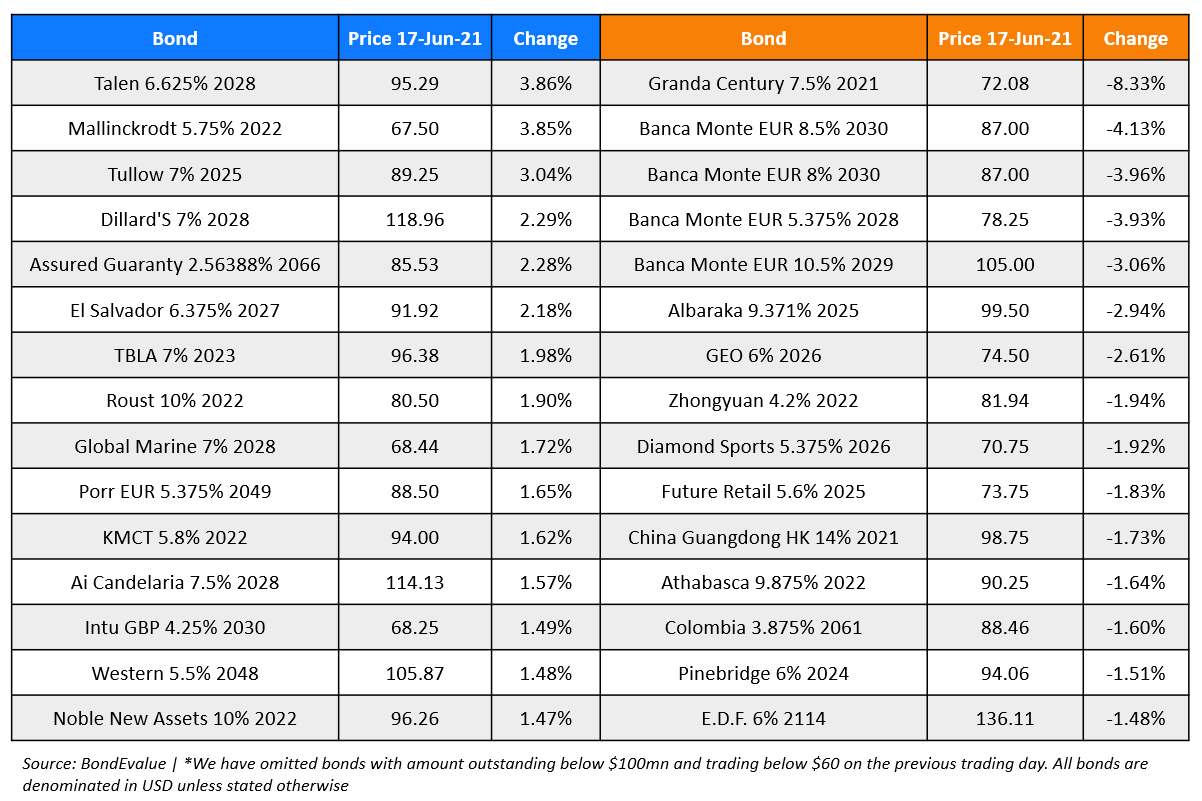