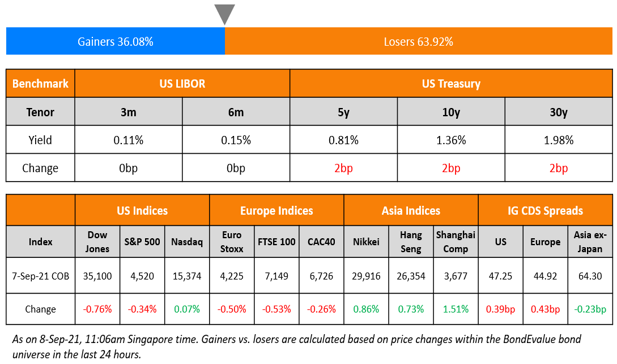 US markets had a mixed opening to start the trading week after the long weekend – S&P was down 0.3% while the tech heavy NASDAQ was up 0.1%. Consumer Discretionary and Communications Services led the upside with gains of ~0.4%. Industrials down ~1.8% dragged the indices lower and most other sectors were down between 0.6% to 1.4%. European markets reversed some of the gains on Monday – DAX, FTSE and CAC were down 0.6%, 0.5% and 0.3% respectively. Saudi’s TASI and UAE’s ADX were up 0.1% and 1.2% respectively. Asian markets had a mixed start – Nikkei and HSI were up 0.8% and 0.1% respectively. Shanghai and Singapore’s STI were down 0.2% and 0.6%. US 10Y Treasury yields climbed another 4bp to 1.36%. US IG CDX and HY CDX spreads widened 0.4bp and 2.8bp respectively. EU Main CDS and Crossover CDS spreads widened by 0.4bp and 3.1bp respectively. Asia ex-Japan CDS spreads tightened 0.2bp.
The ZEW Economic Sentiment for Eurozone for September recorded 31.1 vs. 42.7 last month. The German ZEW Economic Sentiment for September came in at 26.5 vs. 40.4 last month and below the expectations of 30.0. However, the German Industrial Production for July rose to 1% vs. -1% in June and above the expectations of 0.9%.

Volcker Moment refers to a policy change where the then Federal Reserve Chairman Paul Volcker decided to quickly raise interest rates to 20% to contain inflation in the late 1970s. The sharp move caused a jump in unemployment but also tamed inflation.

With regard to Chinese real estate, Nomura says that the policies tightening the property sector and curbing prices by Beijing may be China’s Volcker Moment as it will cause a significant slowdown in economic growth.

On government bonds softening as investors bet on taper

“The timing of this move in Treasuries is strange…[monetary stimulus withdrawal] could put some fire to the heels of the Fed”.

“There could be a short impact on market sentiment…But the market is already very well prepared for ECB tapering and I do not see any major reactions in bond prices from here.”

We are facing a dangerous foreign exchange crisis…We are also facing a shortage of rupee revenues because of lockdowns.”

“I want to reassure all those who may have been concerned, as a result of these reports that Sri Lanka would not be able to meet its debt, that we are very much having the ability to do so.”

“We expect the company’s deleveraging path to be bumpy, which could lead to deep price discounts for its property sales and potential asset disposal”. 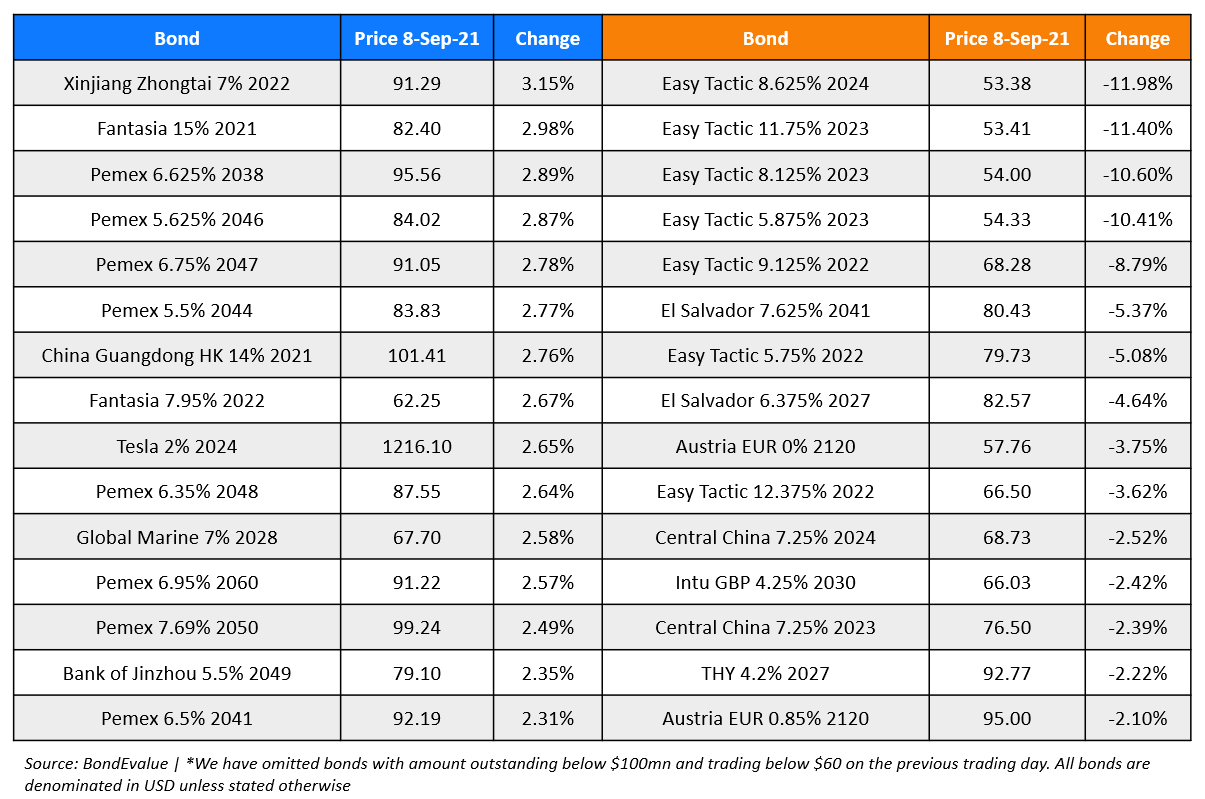