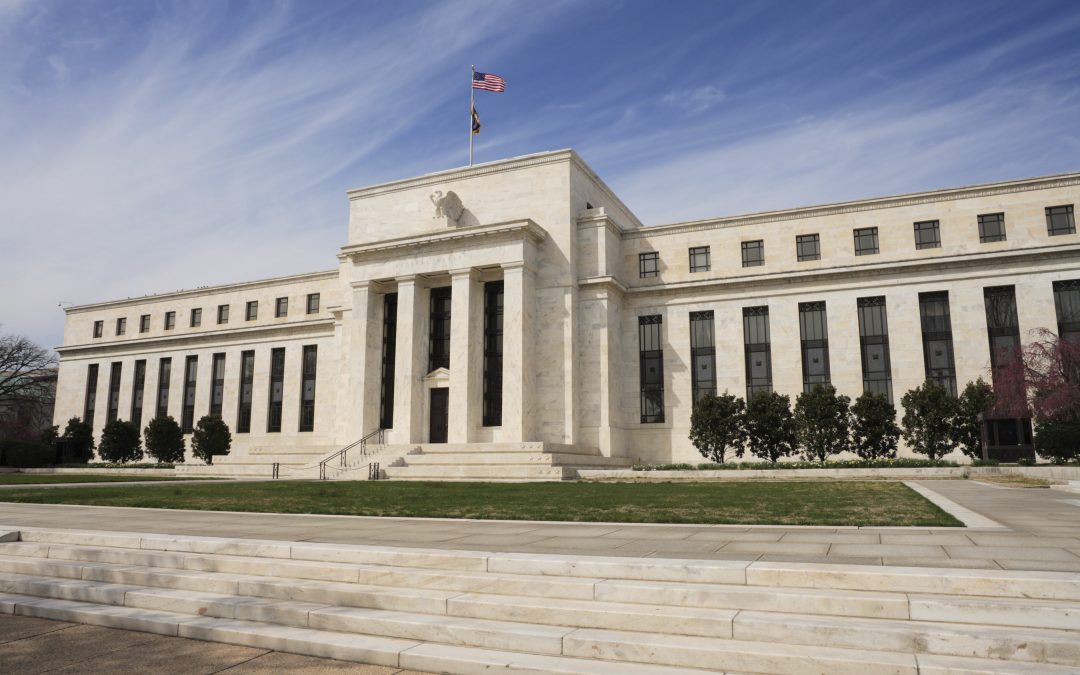 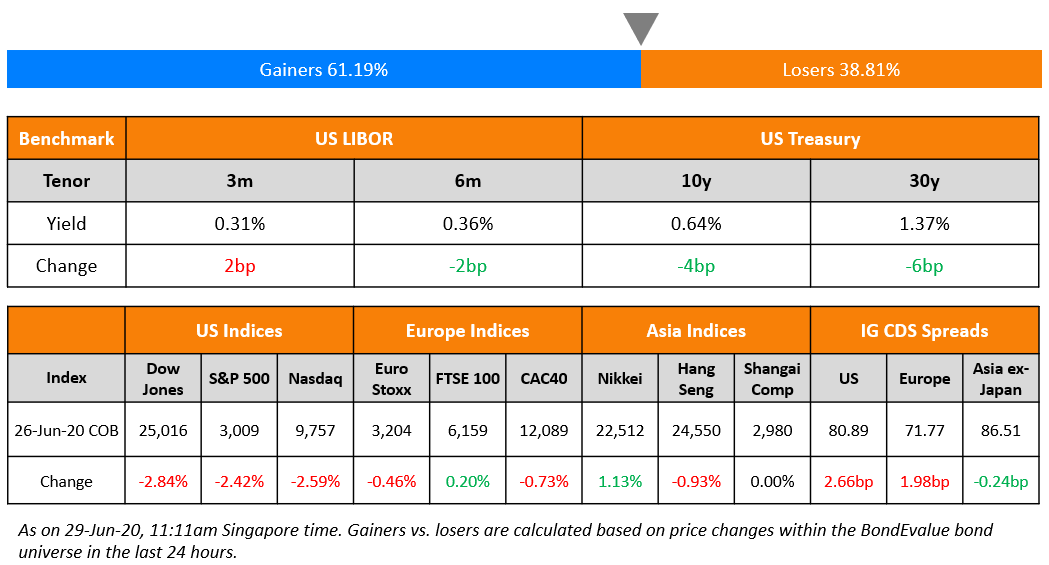 As coronavirus cases globally cross the 10 million mark, with more than half a million deaths, markets are now worried about the potential impact of economies not reopening as soon as expected. With more than a quarter of cases globally in the US, and states like Texas and Florida reinstating some restrictions as their daily cases hit record highs, Friday saw Wall Street lower by 2.5%. The Fed’s ban on share buybacks and capping of dividends also weighed heavily on bank shares. Tech stocks Facebook and Twitter saw a drop of 7-8% as an advertiser boycott related to non-blocking of hate speech on these platforms gained momentum. Asian markets are opening lower by 1-1.5% this morning but US index futures are seeing modest gains of around 0.25%. Political unrest continues in Hong Kong as protests against the new security legislation resume. Asian dollar bond credit spreads were lower last week continuing an almost two month rally. US treasury yields were lower by a few bps across the curve on safe haven bids amid the risk off sentiment.

Find out more about our masterclass here. 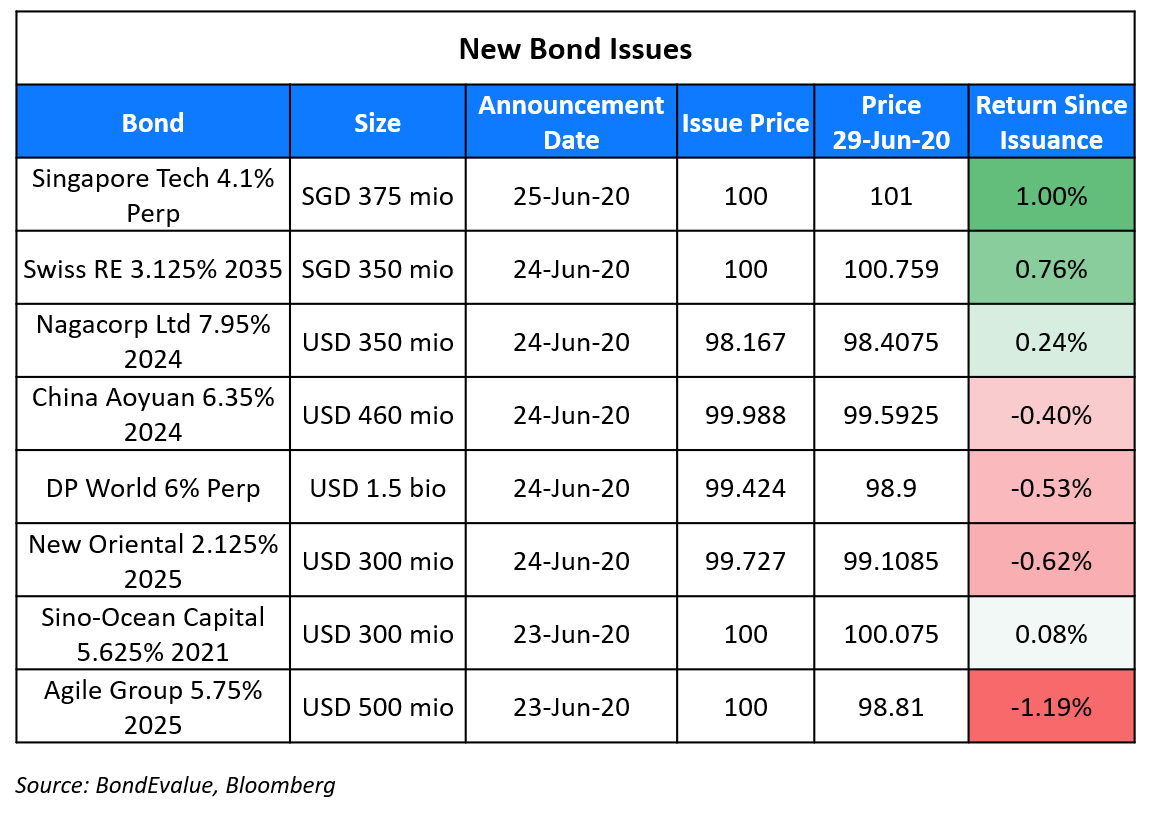 S&P downgraded Axis Bank to BB+ from BBB- on worsening operating conditions while affirming the ratings of seven other banks and placing Indian Bank on Credit Watch with negative implications. S&P expects the asset quality of Indian banks’ to deteriorate over the next one year. It also revised the Banking Industry Country Risk Assessment (BICRA) for India to Group 6 from Group 5. The rating agency affirmed the rating of government-owned banks based on the likelihood of government support for these banks. According to the rating agency, HDFC and Kotak Mahindra continue to have a strong asset quality while ICICI is likely to see improvement in the capitalization.

S&P expects the asset quality to deteriorate in the Non Banking Financial Corporation (NBFC) sector as well following the pandemic. The rating agency believes that Indian NBFCs are exposed to challenges from operating conditions and has thus lowered the ratings of four NBFCs. These include Shriram Transport Finance Co Ltd (STFC), Bajaj Finance Ltd, Manappuram Finance Ltd and Power Finance Corp Ltd (PFC). The ratings of Muthoot Finance Ltd and Hero FinCorp Ltd were affirmed. The list of the rating actions initiated on Friday is as per the following table. 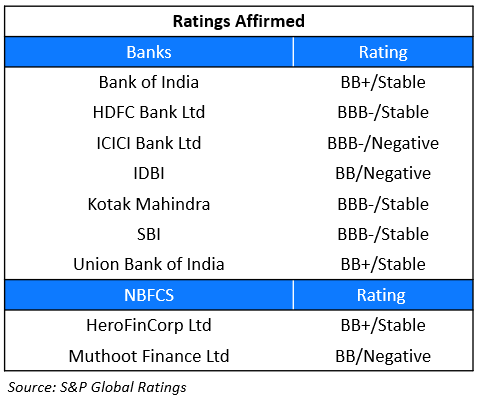 The Federal Reserve revealed the bonds that it has purchased as part of its Secondary Market Corporate Credit Facility (SMCCF) on Sunday. The disclosures show that the Fed has purchased a total of $428.9mn worth of direct corporate bonds and $5.3bn worth of exchange traded funds (ETFs). While the ETF purchases began on May 19, the direct bond purchases began on June 16. The details of direct bond purchases are summarized in the tables below. 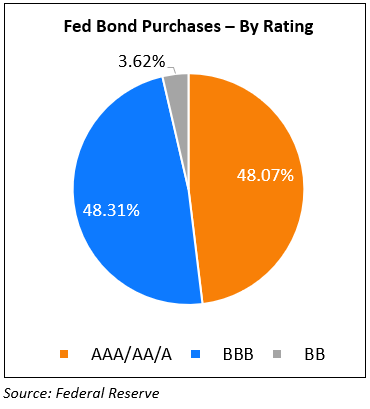 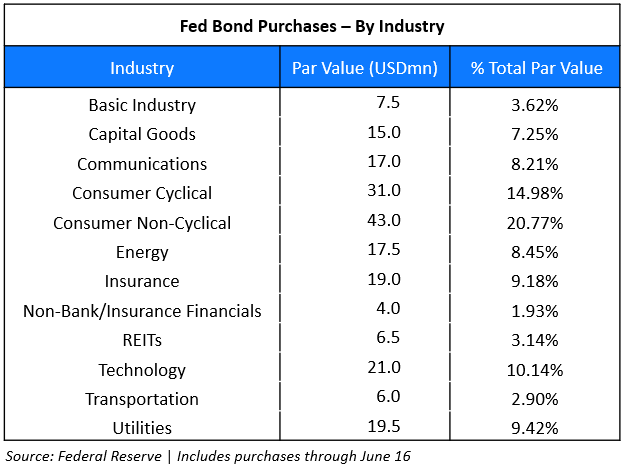 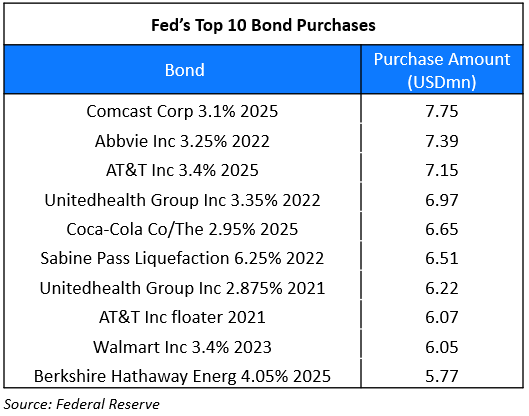 The weighted average maturity of its bond holdings (through June 16) stands at 3.3 years.

Private equity firms Advent and Cinven are taking over Thyssenkrupps’ lifts business for €17.2bn in one of Europe’s largest leveraged buyouts. Advent and Cinven presented investors with proposed bond terms, which analysts said are “the worst ever seen”, on the €7.1bn debt backing the deal. The bond terms, known as covenants, include:

According to analysts, the new owners will be successful in selling the proposed debt, which includes €4.05bn worth of secured and unsecured bonds and €3.05bn of loans, given the high yield on offer. Advent and Cinven are expected to offer coupons in the range of 4-5% on the bonds and 7-8% on the loans, according to people close to the deal as per the FT. Please use the sharing tools found via the share button at the top or side of articles. “This company is coming out in the middle of coronavirus with a covenant package that’s from all accounts the worst the market has ever seen,” said one adviser who reviewed the terms. “It feels so tone-deaf in the context of what we’re going through right now.”

Noble Launches $50mn Tender Offer for Its PIK Bonds Due 2022

Noble New Asset Co Limited announced last week that it is offering to purchase in cash up to $50mn worth of its $680.3mn Tranche B senior secured Payment-In-Kind Bonds (PIK) (Term of the day, explained below) due 2022. The tender offer exchange filing indicates a rather wide range of the tender offer price, the minimum being 55 and maximum being 99 percent of par value. The tender offer will be conducted via an unmodified Dutch auction, which means the price paid to each holder may not be the same. The offer launched on June 25 and will expire on July 24. The PIK bonds due 2022 are currently trading at 69.3 cents on the dollar on the secondary market. 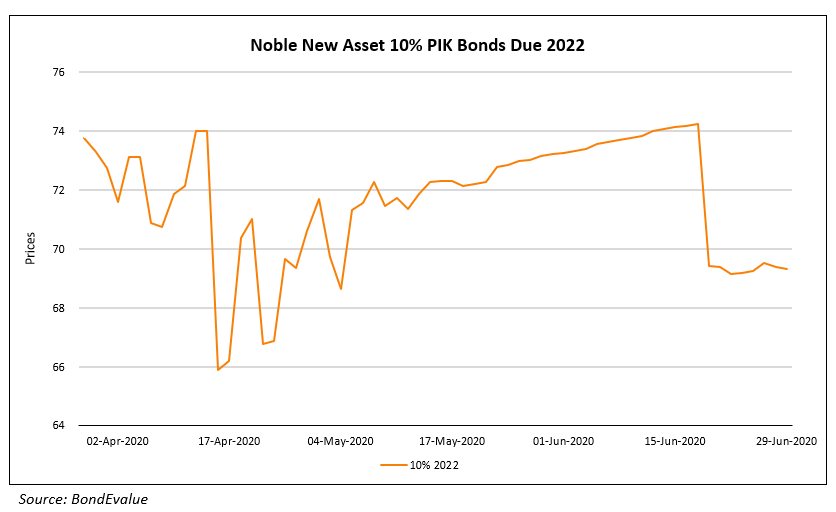 Chesapeake Energy Corp filed for Chapter 11 on Sunday, becoming the largest US oil and gas producer to seek bankruptcy protection in recent years. “Despite having removed over $20bn of leverage and financial commitments, we believe this restructuring is necessary for the long-term success and value creation of the business,” current CEO Lawler said. Chesapeake plans to eliminate approximately $7bn of its debt and has agreed to principal terms for a $2.5bn exit financing, while some of its lenders and secured note holders have agreed to backstop a $600mn offering of new shares, to take place upon exiting the Chapter 11 process. Chesapeake bond prices have seen a steep fall in the months April through June. The 6.125% bonds maturing in 2021 are currently trading at 4 cents on the dollar.

Another US-based oil and gas producer Sable Permian Resources, which was created by Aubrey McClendon after being ousted from Chesapeake Energy Corp, filed for Chapter 11 bankruptcy protection. The Houston-based company said it had secured debtor-in-possession (DIP) financing of $150mn to fund its operations during the restructuring and that it was working with advisers and stakeholders on alternatives.

In related news, Mexican retailer Grupo Famsa also said on Friday that it was seeking Chapter 11 bankruptcy protection in the United States. Famsa said it had enough cash on hand to finance its operations while it seeks protection in the U.S. courts.

Softbank Group (SBG) revealed plans to purchase up to JPY 200bn ($1.9bn) of local unsecured corporate bonds on June 29 as a part of its debt restructuring plan. The bank is in the process of raising $41bn to fund a share buyback and reduce its debt as it suffered a record loss. Softbank has also sold a part of its stake in T-Mobile and expects a gain of JPY 600bn ($5.6bn) in the April-June quarter. As per Reuters, Softbank’s balance sheet is highly leveraged with an oversized presence in Japan’s non-investment grade bonds which is supported by its loyal investors.

In related news, Moody’s confirms SoftBank Group’s Ba3 rating while changing the outlook to negative on June 26. According to the rating agency, SBG has enough cash to cover debt maturing over the next two years and has a good portfolio including ~25% in Alibaba Group. However, the large recapitalization plans, thin interest coverage ~1x and aggressive financial policy with associated governance concerns could lead to a potential downside The company plans to monetize up to JPY 4.5tn (~41bn) this year and use the proceeds to repurchase up to JPY2tn (~18bn) of its shares and use JPY2.5tn (~$23bn) to pare its debt. There was no major change in the prices of Softbanks bonds.

The Blackstone Group Inc has joined many other real estate investors who have defaulted on their debt. The US private equity (PE) firm failed to make a payment on a debt of $274 mn taken against collateral of its four properties in Chicago, Philadelphia, Boston and San Francisco. The four hotels were acquired by the firm from Club Quarters in 2016. The PE firm had seeked modifications and forbearances with the mortgage administrators earlier in April as the properties remain closed due to the ongoing pandemic. It views the investment as very small and stated that these had been written down prior to Covid-19 due to operational challenges while continuing to engage with lenders and the hotel management company. According to the FT, investors may not make a full recovery. Data provider Trepp reported that nearly one fourth of hotel loans were past due in June. Some other big names to miss out the loan payments include Canadian investment group Brookfield and real estate investment group Colony Capital.

In the case of Noble, the amount issued on its PIK bonds due 2022 stood at $587.66mn at the time of issuance in Dec 2018. This increased to a total amount outstanding of $647.9mn currently, indicating that the difference is the amount of unpaid interest that has accrued.

On the China Debt Market – Amanda Du, a Moody’s vice-president based in Shanghai.

“I rule out that we buy bonds that were rated ‘junk’ before the crisis. On the other hand, if rating agencies downgrade well-rated companies during the crisis, this can reinforce an already negative trend.” Villeroy said, along with a warning that the ECB must examine whether it can reduce the dependence of its monetary policy on rating companies. Policy makers stopped short of adding fallen angel bonds when the ECB decided this month to almost double the size of its pandemic purchase program to 1.35 trillion euros ($1.5 trillion). Villeroy also warned that “Europe must not repeat the mistakes made 10 years ago when debt consolidation began too soon after the crisis.”

“While the ample liquidity and the low-rate environment continues to provide EMs with the lure of high coupons, as the recovery process gets delayed, I think the risk considerations are worsening for emerging markets as a class,” Carmen Reinhart. The World Bank is predicting emerging and developing nations as a group will shrink 2.5% – their worst performance since 1960. The economic pain could catch some more bullish investors wrong-footed. 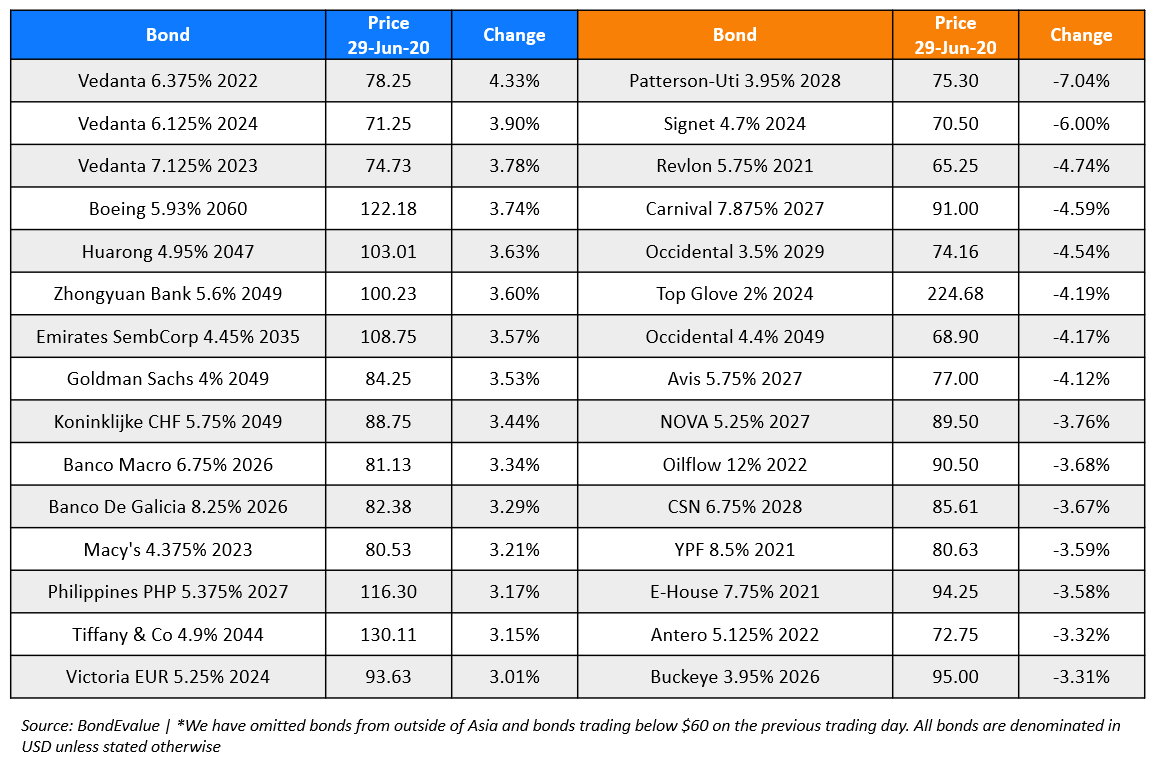