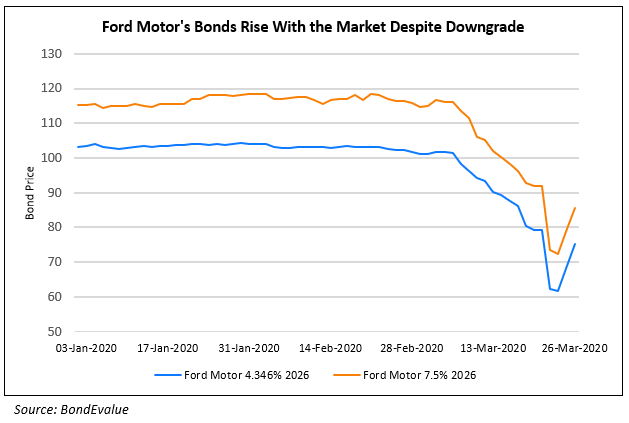 The US stock market saw its first consecutive daily gain after more than a month. This syncs up well with the first new bond issue in Asia that has also come after a month. Markets are upbeat as the US Congress closes in for a fiscal stimulus plan to alleviate the effects of the coronavirus. S&P closed up about 1.2%. The fiscal stimulus coupled with the steps taken by the Fed are showing investors that the government is willing to step in to do whatever it takes. “Markets stop panicking when politicians start panicking,” said Andrew Slimmon, senior portfolio manager for Morgan Stanley Investment Management.

A week after the carmaker shuttered most global plants, S&P has downgraded Ford from its investment-grade credit rating, sending $36bn of its debt into junk territory. Moody’s, which had already rated Ford as junk, downgraded it by another notch making the average of the company’s four public ratings below investment grade. Ford’s debt load, which is one of the main drivers for the downgrade, is the largest of any recent “fallen angel”, a term given to companies that slipped from the coveted investment-grade credit rating. The yield on Ford’s debt maturing in 2026 is well above the average 8.3% for double-B rated debt. Before the announcement, Moody’s put seven European carmakers on downgrade watch including Daimler, Volkswagen and Renault while downgrading BMW debt to A2 from A1.

SoftBank Lashes Out at Moody’s after Debt Downgrade

SoftBank Group Corp. accused the ratings company of “bias” and “creating substantial misunderstanding” after its debt was downgraded by two notches just days after the company announced a $41bn asset sale program. Softbank’s debt rating stands at Ba3, down from Ba1. This followed a similar move by S&P Global earlier this month. S&P cut its outlook to negative on Softbank over plans for a stock buyback. “Asset sales will be challenging in the current financial market downturn, with valuations falling and a flight to quality,” said Motoki Yanase, a Moody’s senior credit officer in Tokyo.

US Fed tapped a division of BlackRock to manage the billions of dollars in bond and mortgage backed security purchases announced recently to manage the fallout from the pandemic. BlackRock’s Financial Markets Advisory unit will act as investment manager for the three new facilities. Two of these Fed backed vehicles will buy corporate bonds while the third will buy mortgage backed securities issued by US government agencies. BlackRock said in a statement that they would offer details on the primary bond purchases and begin the secondary market purchases as soon as possible, but “will not engage in discussions with market participants” before then.

As entire industries get hit by the fallout of the coronavirus and the collapse of oil prices, distressed debt in the U.S quadrupled in just a few weeks to hit nearly 1$ trillion, levels not seen since 2008. Distressed debt refers to corporate bonds that yield at least 10% above US treasuries and trade for less than 80 cents on the dollar. Investors like Apollo Global Management Inc and Oaktree Capital Management LLD are using this opportunity to find dislocations in valuations in the distressed debt space.

Occidental Gives In to Carl Icahn

After a bitter 10-month campaign by billionaire activist investor Carl Icahn to fire the board and seize control of the shale giant, Occidental Petroleum Corp agrees to a truce. The immediate challenge for CEO Vicki Hollub, who has survived Icahn’s calls for resignation, will be Occidental’s near $40bn of debt at a time when oil is trading around 25$ a barrel, the lowest in 18 years. 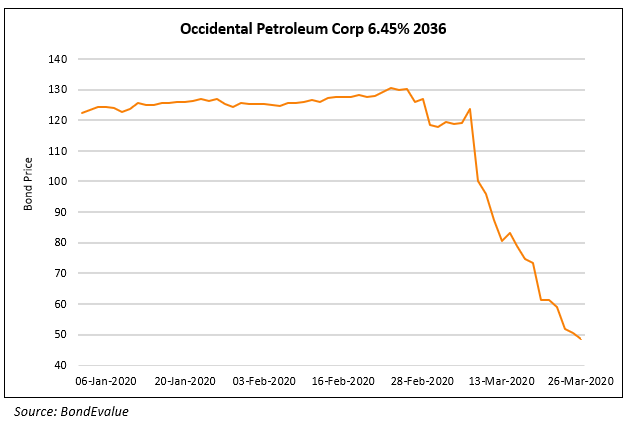 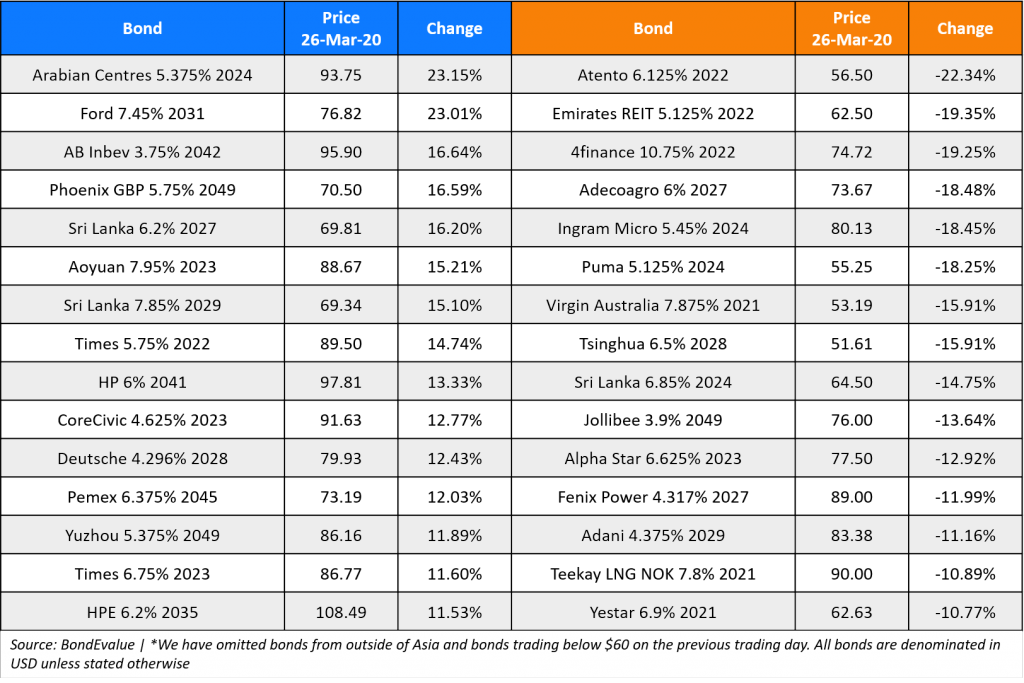 Billionaire investor Bill Ackman has cashed in $2.6bn from bets that companies would struggle to pay their debts, less than a week after warning the American people that “hell is coming” as a result of coronavirus.
The founder of Pershing Square told investors on Wednesday that he was ploughing the winnings into the equity market, saying he believed the US government was “all-in” to mitigate the damage the virus has inflicted on the economy.
Pershing Square disclosed this month that it had paid $27m for credit protection on investment grade and high-yield bonds to add to existing positions at “deeply discounted prices”.

Coronavirus threatens India’s banking recovery before it even starts

The sight of Rana Kapoor, one of India’s highest-profile bankers, being taken to a Mumbai court in his tracksuit in early March augured what has become a very bad month for the country’s banking sector.
Mr Kapoor was arrested and accused of taking kickbacks only days after Yes Bank, the lender he founded in 2004 but left last year, was taken over by the country’s central bank amid concerns it would not survive a deterioration in its loan book. Mr Kapoor, who denies the allegations, was sent to custody.
To save Yes Bank, the authorities cobbled together a rescue plan that saw a range of big-name Indian lenders led by the State Bank of India (SBI), the country’s largest, infuse funds in return for an equity stake. The episode came as a jolt to investors, who worried it could exacerbate vulnerabilities in the financial system.
But the challenges now facing India’s banking sector have reached another order of magnitude due to the coronavirus threat, and investors have made it known by dumping equities. Bank stocks have been among the hardest hit.