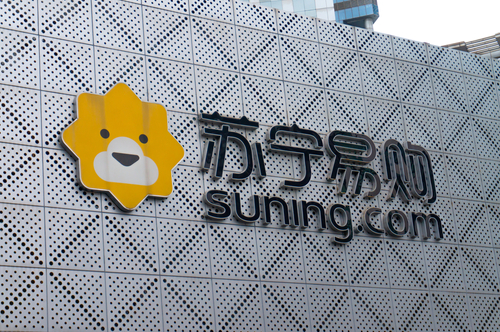 China’s Suning.com has reached a deal to sell a 16.96% stake worth $1.36bn to a consortium led by Nanjing state asset management committee and the Jiangsu provincial government. The other members of the consortium include Alibaba Group Holding Ltd., Midea Group Co., Haier Group Co., Xiaomi Corp., and TCL Technology Group Corp. The shares of the distressed company will be bought at CNY 5.59/share ($0.87/share), the lowest in 8Y and the price at which the stock trading was halted on June 16. After the deal, the billionaire owner Zhang Jindong will lose his control over the retail arm. Alibaba with a 19.99% stake will become the largest shareholder, although much below a controlling stake. Zhang will hold 17.62% directly and Suning Appliance will hold 2.73%. The deal comes after a failed effort by the company to sell a 23% stake worth CNY 14.8bn ($2.3bn) to a group led by Shenzhen International Holdings earlier this year and reflects China’s efforts to clean up its indebted corporate sector. The Chinese retailer also reported on Monday that it posted a preliminary loss of CNY 3.2bn ($495mn) in 1H2021 vs. losses of CNY167mn ($25.8mn) last year. Suning Appliance and its subsidiaries have $4.6bn in onshore and offshore bonds outstanding including a $600mn 7.5% bond due in September 2021. Its stock and bonds had crashed in June on fears over its large debt pile.

As per Bloomberg, “concerns over Suning’s cash flow initially surged to the fore in September, when Zhang waived his right to a CNY 20bn ($3.1bn) payment from Evergrande. The decision, which helped his friend and Evergrande chairman Hui Ka Yan save his own company, made little financial sense to investors at the time — especially given that the group was significantly weakened by slowdown in spending during the pandemic.”