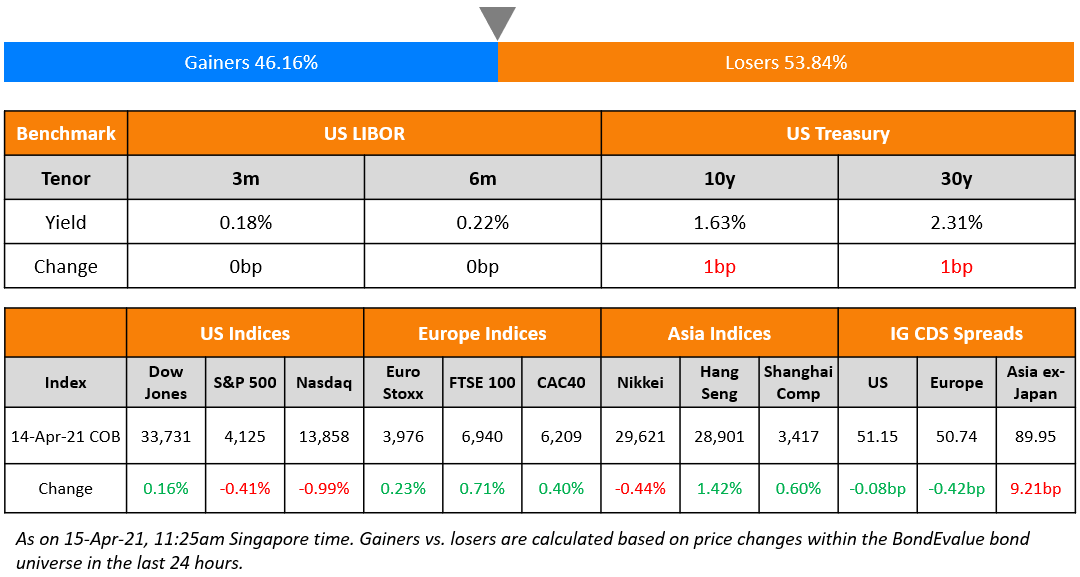 S&P and Nasdaq slipped 0.4% and 1% respectively after moving higher intra-day as the earnings season is underway with banking majors Goldman, JP Morgan and Wells Fargo reporting strong numbers. US 10Y Treasury yields were 1bp higher. Meanwhile in Europe, DAX was down 02% while CAC and FTSE were up 0.4% and 0.7% respectively. US IG CDS spreads were 0.1bp tighter and HY was 0.4bp tighter. EU main CDS spreads were 0.4bp tighter and crossover spreads tightened 2.8bp. Asian equity markets are down 0.5% and Asia ex-Japan CDS spreads were a massive 9bp wider. 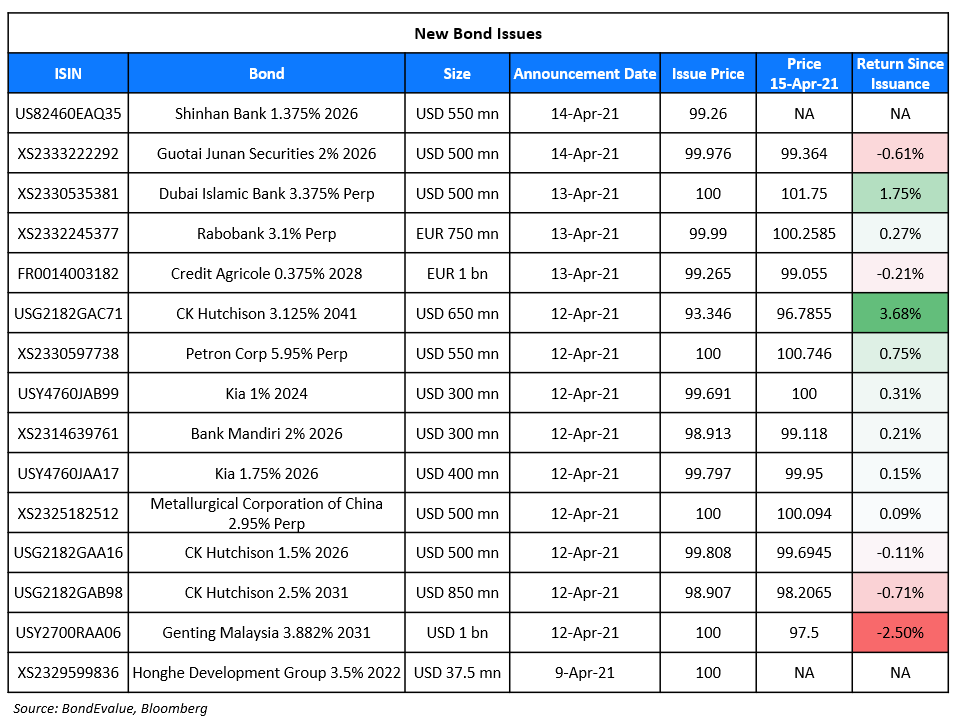 Shinhan Bank raised $mn via a 5.5Y sustainability bond at a yield of 1.514%, 25bp inside initial guidance of T+90bp area. The bonds have expected ratings of Aa3/A+/A, x issue size. Proceeds will be used to fund or refinance green and social projects under the bank’s sustainable development goals bond framework.

Z-Spread, also known as Zero-volatility spread is a fixed spread over the Treasury spot curve that makes the present value of the bond equal to its price. The Z-spread indicates the extra compensation or spread for credit, liquidity and optionality risk that investors would receive for buying that bond. The idea of calculating the spread is that a coupon paying bond can be valued as a series of zero-coupon bonds and the present value of these should be equal to the price of the bond. A simple approximate formula to understand Z-spread better is:

On the US entering faster growth even as virus spike remains a risk – Jerome Powell, Federal Reserve Chairman
“We will reach the time at which we will taper asset purchases when we’ve made substantial further progress toward our goals from last December, when we announced that guidance,” Powell said. “That would in all likelihood be before — well before — the time we consider raising interest rates. We haven’t voted on that order but that is the sense of the guidance.”
“When the purchases go to zero, the size of the balance sheet is constant, and when bonds mature you reinvest them,” Powell said. “And then another step — and we took this late in the day in the last cycle — was to allow bonds to start to runoff. And we haven’t decided whether to do that or not.”
On the Euro zone economy still on crutches – Christine Lagarde, European Central Bank president
“Think of a patient which is out of a deep crisis but still on two crutches,” Lagarde said. “You don’t want to remove either crutch, the fiscal or the monetary, until the patient can actually walk fine and to do that means support well into the recovery.”

Zhang Gang, strategist at Central China Securities Co
“The expectation in the market is that the central bank will gradually tighten its liquidity as it seeks policy normalization after the pandemic,” said Zhang.
Xing Zhaopeng, senior China strategist at Australia & New Zealand Banking Group Ltd
The operation “is a bit disappointing to the bond market and funding costs will rise,” said Xing.
On Zimbabwe finance minister’s roadshow to win over investors – Mthuli Ncube, Zimbabwean Finance Minister
“The objective of the pitch is to position Zimbabwe as an economy and investment destination in recovery,” Ncube said. “The positive outlook on economic performance for 2021, on the back of successful economic reforms and good rainfall season, among other factors, speaks strongly to recovery.” 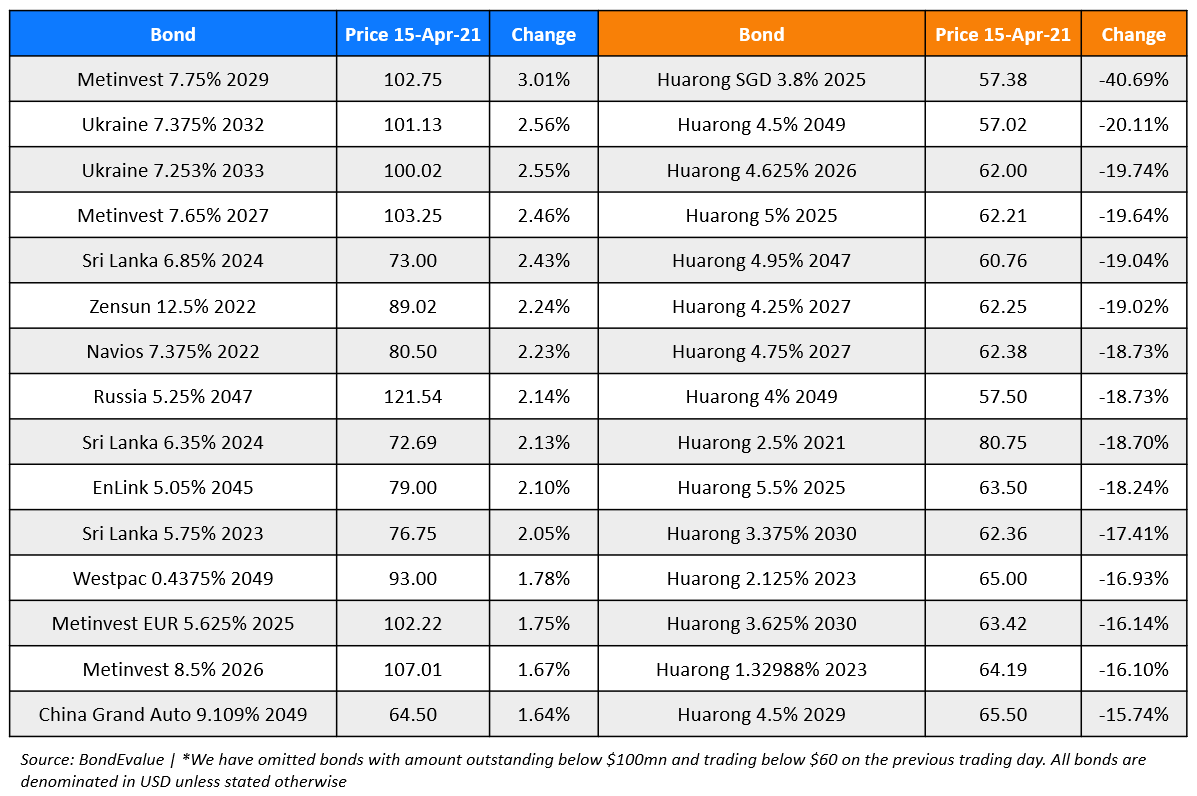