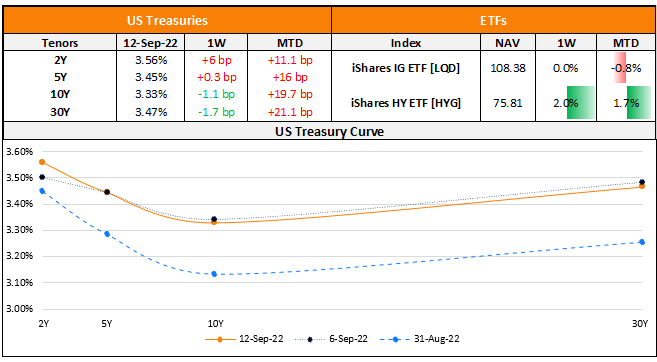 Primary market saw one its busiest weeks this year across all regions. US primary market issuances witnessed a sizable $38.8bn in issuances last week as compared to nil issuances in the week prior. Of this, IG issuances stood at $37.2bn where the largest deals included Walmart’s $5bn and Lowe’s $4.75bn four-tranchers each, followed by Nestle’s $4bn five-trancher and JPMorgan’s $3.5bn deal. HY issuances were at $1.5bn with Nortonlifelock raising the entire amount via a dual-trancher. In North America, there were a total of 28 upgrades and 23 downgrades across the three major rating agencies last week. As per Lipper data, US IG funds saw $866mn in outflows in the week ended 07 September, a third week of outflows after three consecutive weeks of inflows. HY funds saw even larger outflows at over $2.3bn. Bloomberg notes that junk-bond funds have seen 11 inflows and 24 outflows so far in 2022. In the LatAm region, there were no new issuances for a second consecutive week. In South America, there was 1 upgrade and 4 downgrades across the major rating agencies. EU Corporate G3 issuances were slightly higher at $25.2bn vs. $21.7bn one week prior – BFCM’s €2.25bn dual-trancher and BBVA’s $1.75bn two-tranche deals led the table. Across the European region, there were 13 upgrades and 18 downgrades. The GCC G3 primary bond market saw $500mn in issuances vs. $325mn in the week prior – Abu Dhabi Commercial Bank (ADCB) was the sole issuer last week. Across the Middle East/Africa region, there was 1 upgrade and no downgrades across the three major rating agencies. APAC ex-Japan G3 region issuances jumped to $6.7bn vs. $2.8bn in the week prior led by Indonesia’s $2.65bn three-trancher and KEXIM’s $2.5bn three-trancher. However, including Japanese issuances, the region saw about $17bn in deals priced as several Japanese issuers tapped the debt markets. In the APAC region, there were 20 upgrades and 25 downgrades combined across the three rating agencies last week. Looking at credit default swap (CDS) spreads over the last month, US IG CDS spreads are at its widest levels while Asia ex-Japan CDS spreads are at its tightest. This indicates a divergence in the broad credit markets across these two regions. 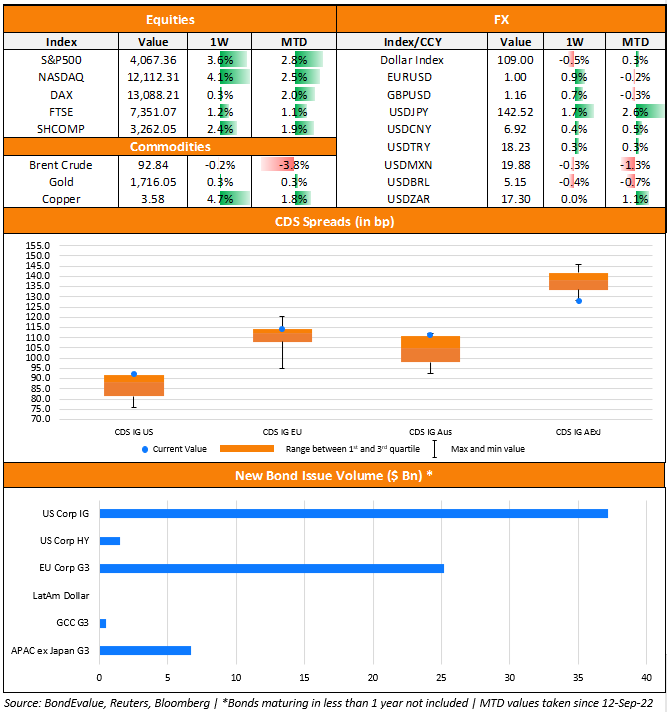