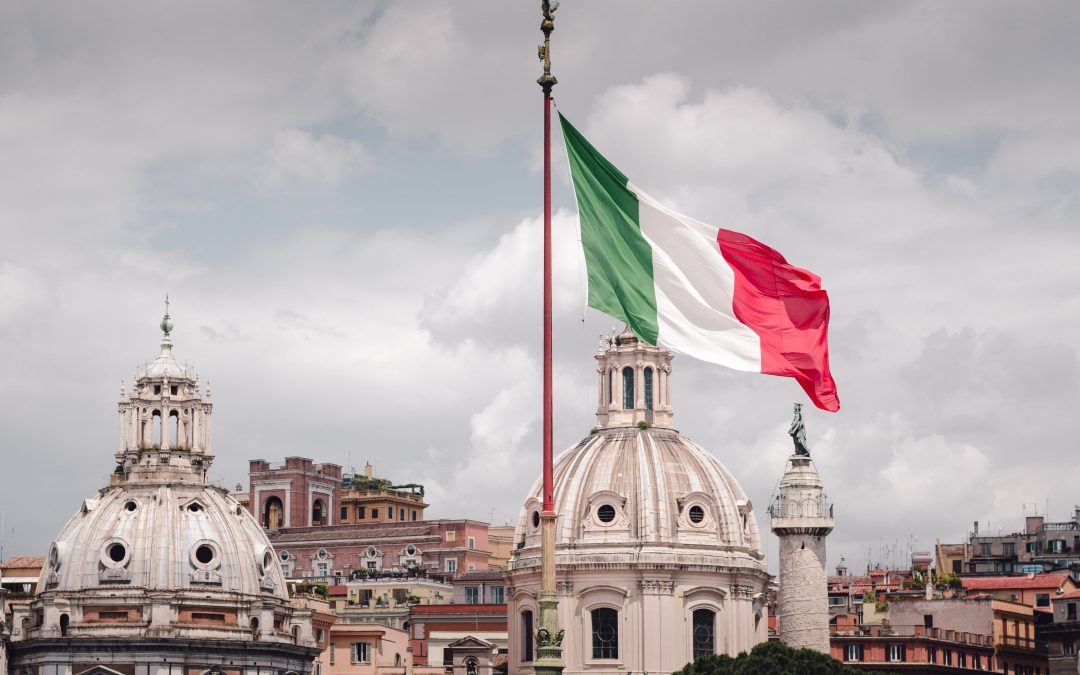 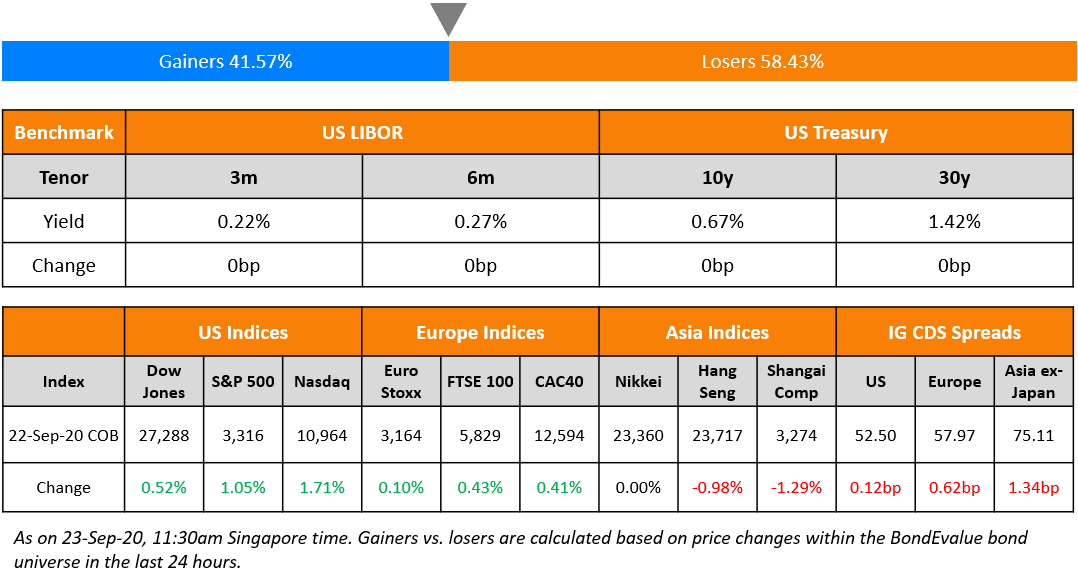 S&P ended 1.05% higher led by tech and most sectors barring financials and energy, which lagged ~1%. Amazon led big-name tech, up by 5.7% while Facebook and Microsoft closed higher by 2.7% and 2.4% respectively. The 10Y Treasury yield was relatively unchanged and the Dollar Index (DXY) rallied further to the 94 level, helped by some comments from Fed’s Evans (see Talking Heads). Asian equities are mixed in trade today with some indices flat and few others lower. US IG and HY CDS indexes were flat after markets stabilized somewhat yesterday even as the iShares HY ETF saw over $800mn in outflows yesterday. Asia ex-Japan IG CDS, which saw a spike up of 16bp on Monday eased a tad by ~1.5bp. 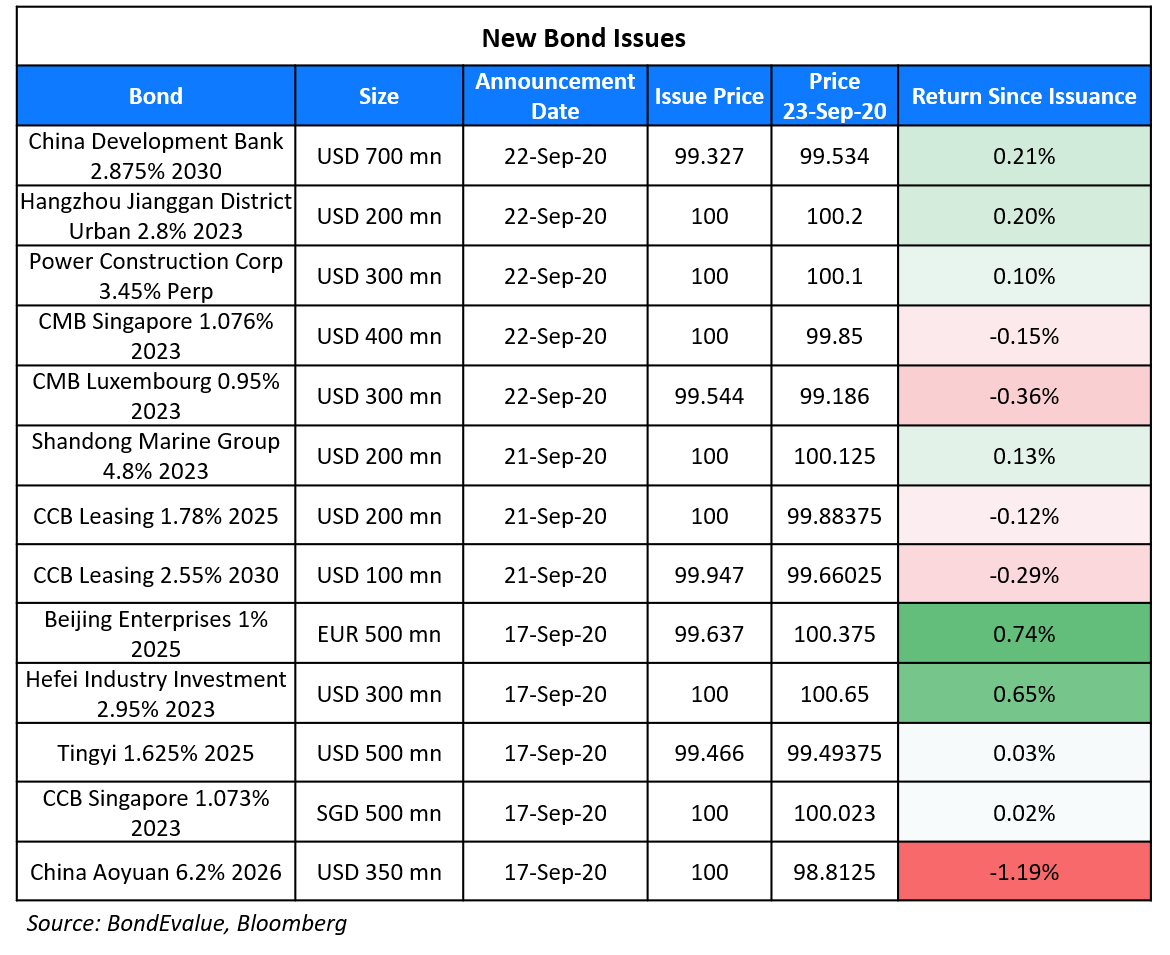 Power Construction Corp of China raised $300mn via Perpetual non-call 5Y (PerpNC5) bonds to yield 3.45%, 40bp inside initial price guidance of 3.85% area. The bond, with expected rating of BBB, received final orders exceeding $1.3bn, 4.33x issue size. The bonds are callable in 2025 and if not called, the coupon will reset to the initial spread of 318.9bp over 5Y Treasuries plus a 300bp step-up.

China Development Bank Financial Leasing (CDB Leasing) raised $700mn via 10Y non-call 5Y (10NC5) debut tier 2 offshore bonds to yield ~3.02%, 275bp over Treasuries and 30bp inside initial guidance of T+305bp area. The bonds have expected ratings of BBB+/A-. The bonds are callable in 2025 and if not called, the coupon will reset to the initial spread of 275bp over 5Y Treasuries with no step-ups.

China Merchants Bank (CMB) raised a total of $700mn via a dual-tranche bond offering. It raised $400mn via 3Y floaters from its Singapore branch to yield 1.076%, 85bp over 3-month LIBOR and 45bp inside initial guidance of 3mL+130bp area. It also raised $300mn via 3Y sustainability bonds from its Luxembourg branch to yield ~1.105%, 95bp over Treasuries and 45bp inside initial guidance of T+140bp area. The bonds, with expected ratings of A3, received total orders over $1.6bn when final guidance was announced, 2.29x issue size.

Moody’s upgrades Antero Resources’ CFR to B2, notes to B3

Moody’s downgrades Bolivia’s ratings to B2, changes outlook to stable

Italy’s regional election results (20-21 September) began coming out late Monday and Far-Right leader of the ‘League’, Matteo Salvini failed to win a stronghold in Tuscany, contrary to what was expected.This was seen as a strong positive by the markets pushing bond yields lower. The election “was something which we saw as probably one of the few risks to Italian spreads this year,” said Nick Sanders, portfolio manager at AllianceBernstein. Salvini has been known to take aggressive stances in the recent past, which have led to spikes in Italian sovereign bond yields and widened spreads. 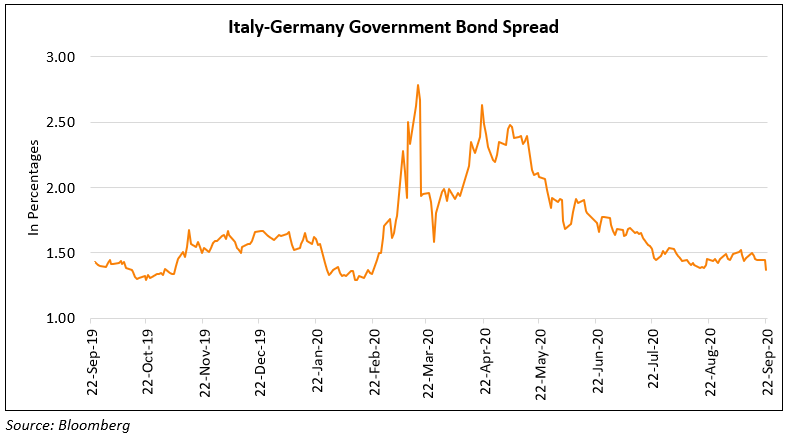 The cost of the new Petróleos Mexicanos (Pemex) refinery could rise by 20-35% due to the weakening peso as well as an increase in the cost of steel, according to an industry analyst. Pemex had started the construction of a 340,000 barrel/day (bbl/d) Dos Bocas refinery in June 2019 at an expected cost of $7.6bn with an aim to reduce its dependency on the US for petroleum imports. The ~$8bn Dos Bocas project has been a part of President Obrador’s rescue plan for Pemex as well as to ramp up domestic fuel production. However, according to independent energy analyst Ramsés Pech, “Pemex has given its budget in pesos; when the project was drawn up in 2018 it was with an exchange rate of 18 [pesos] to the dollar”. The Mexican Peso is currently trading at ~21.8 to the dollar. In addition to the extra cost, the timeline for completion of the project may also get stretched. According to Ixchel Castro, oil and refining markets manager for Latin America at Wood Mackenzie, “The key issue here is whether Dos Bocas is going to be operating in three years”. Due to the prevailing conditions, Pemex expects a drop in oil exports over the next three years. The state oil company has forecasted a drop of ~70% in exports of its flagship heavy crude called Maya. Due to the reduced demand for oil as well as the lower price of crude, Mexico is in the process of reducing its crude production. According to Finance Minister Arturo Herrera, oil exports will be budgeted at ~$40/barrel for 2021, ~22% lower than what was planned for 2020. Pemex’s dollar bonds were in yesterday’s top loser list falling ~4 points since Monday’s close. 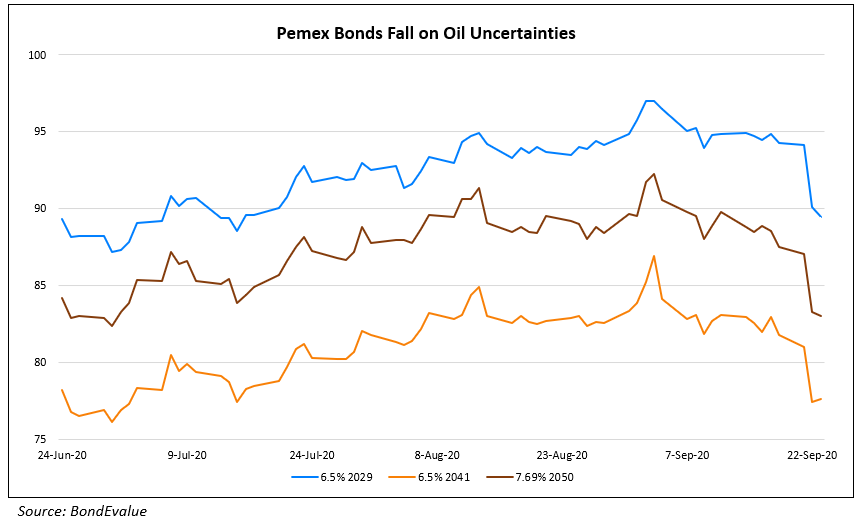 Sri Lanka’s ruling party is seeking unprecedented powers for President Gotabya Rajapaksa through a bill that proposes to remove the legal and legislative oversight of the President on human rights spending and awards the head of state the right to appoint Supreme Court judges. The bill also proposes to reinstate the power of the president to sack parliament after it completes just one year of its five-year term and reverses legislation ensuring the judiciary, police, civil service and election commission remain independent branches of the government. The proposed amendment, which has stoked protests in the parliament is likely to be passed as the ruling party has a two-thirds majority. Interestingly, the President’s elder brother Mahinda Rajapaksa was appointed as the Prime Minister recently in August when the People’s Front party won a majority. The Rajapaksa family holds a strong grip on Sri Lanka’s political landscape and the family has at least 5 members elected to the new parliament in the recently held elections. The brothers were instrumental in putting an end to a civil war in 2009 after months of conflict with the Tamil separatists, which attracted criticism from the international community on accusations of war crimes. Opposition Leader Sajith Premadasa said the amendment  would result in “an elected dictatorship in this country” and added that “The parliament will become a puppet… This is the darkest day for democracy in the country,”. The move received a thumbs down from international investors as Sri Lanka’s dollar bonds traded lower on the news. The bonds fell last Friday as well after the Minister of Money & Capital Market said the country did not have an urgent need for IMF support. 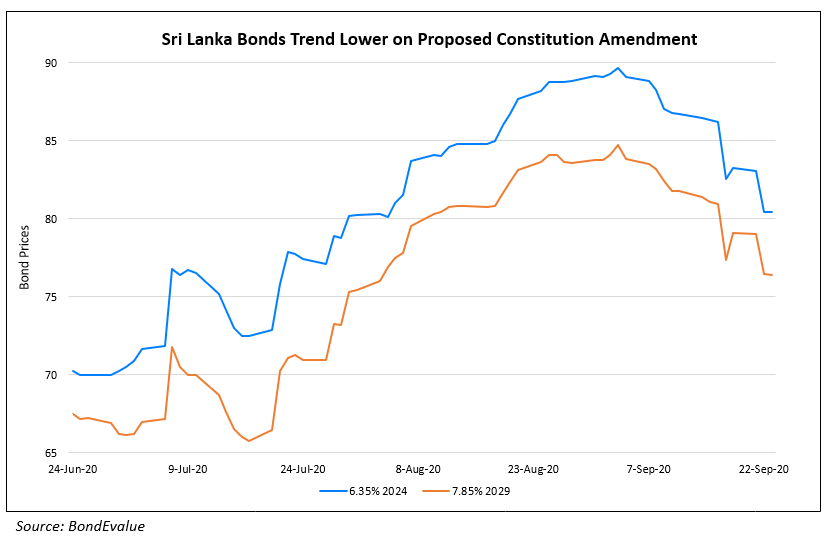 Zambia has asked for a meeting on October 20 with holders of three eurodollar bonds (Term of the day, explained below) worth $3bn to get consent to defer coupon payments till April next year. This would give the southern African country some leeway in its debt restructuring efforts. As per an email statement reported by Bloomberg, the government said, “Zambia is currently faced with unprecedented liquidity constraints that have been exacerbated by the Covid-19 pandemic, resulting in a substantial decline in revenues.” It’s $1bn 8.5% and $1.25bn 8.97% bonds due 2024 and 2027 fell ~3 points from Monday’s close to 53.5 and 53.7 cents on the dollar respectively. Mukuli Chikuba, permanent secretary at the finance ministry said, “What we are getting into is not a default per se, but consensus-building.” It is planning to offer bondholders $0.5 per $1,000 in principal for their consent to the coupon deferment. The results of this consent solicitation may set a precedent for other struggling African nations that have upcoming payments on their respective dollar bonds. In the table below, we have listed dollar bonds from African nations in our coverage – sorted by lowest-to-highest yield. 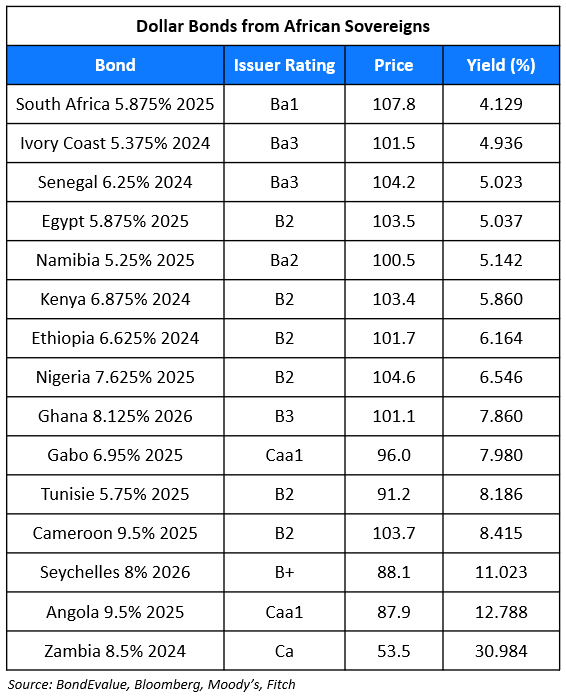 KBBO to Restructure Its Debt of $2bn

UAE’s private investment firm KBBO has hired a turnaround specialist with an aim to restructure a debt of $2bn. This massive restructure has the potential of adding to the bad loans of the country’s banks. KBBO has ~40 lenders including HSBC, Dubai Islamic Bank and Mashreqbank. According to the firm, its exposure to health operator NMC and the ongoing pandemic are the major causes for its bankruptcy. NMC faced an accounting scandal earlier this year due to which its market value had erroded by ~99% in August. It is currently being run by administrators Alvarez & Marsal Inc. The restructure for KBBO is being overseen by UAE’s Financial Restructuring Committee.

On the “highly uncertain” path ahead for US economy despite “marked improvement” – Jerome Powell, Federal Reserve chair

Mr Powell said “the path ahead continues to be highly uncertain … A full recovery is likely to come only when people are confident it is safe to reengage in a broad range of activities” with the coronavirus under control. Until then, Fed officials “remain committed to using our tools to do what we can, for as long as it takes, to ensure that the recovery will be as strong as possible, and to limit lasting damage to the economy,” Mr Powell said

On the risk of longer, slower US recovery and “recessionary dynamics” without fiscal aid – Chicago Federal Reserve President Charles Evans

“Fiscal support is just fundamental,” Evans said. “Every week and every month that we go without renewing additional fiscal support that we saw strongly sent out in the spring and summer, we risk a longer period of slow growth if not outright recessionary dynamics. The judgment has to be, what are we looking for in terms of further reductions in term premiums or portfolio balance effects if we were to engage in further asset purchases,” he said. “I am open-minded; we will have discussions about this.”

“The result of the election is a positive thing, overall it brings more support and solidity to the current government and reduces the chances of rising political uncertainty in the future,” said Cazzulani. “The market is reacting accordingly.” “In the short term this positive mood can continue, but over the medium-term perspective we remain more cautious.”

“The default volume of the US dollar debt of Chinese firms is rising mainly because of weaker corporate fundamentals, pressuring internal liquidity,” Zhang said. “We need to consider macroeconomic factors since the pandemic overseas has not been controlled, while US-China tensions will also affect Chinese US dollar debt.”

“US investment firms and fund managers have subsidiary offices in Europe, Hong Kong and Singapore,” he said. “They do not need approval from their headquarters to make their investment decisions. In the world of investing, whichever place can give you a return is the place that allows you to earn a profit.”

“After the liquidity crunch in March, investors generally have not been chasing high yield bonds despite their higher returns,” Chen said. “Market uncertainty about US-China relations can bring market volatility.”

“For companies that have not recovered, they are fundamentally distressed, and are probably not coming back to the market,” Veneau said. “[These] segments and names are under pressure and are going to default because they can’t service their debt as the market is essentially closed to them.”

“Default rates are rising no matter what,” said Ng. “Investors are pricing relatively high risk in Chinese [corporate debt], even though it’s much improved from March levels.”

“I would not put it past the ECB to do some form of green QE at some point. This is just snowballing downhill now, it’s not going to stop.” 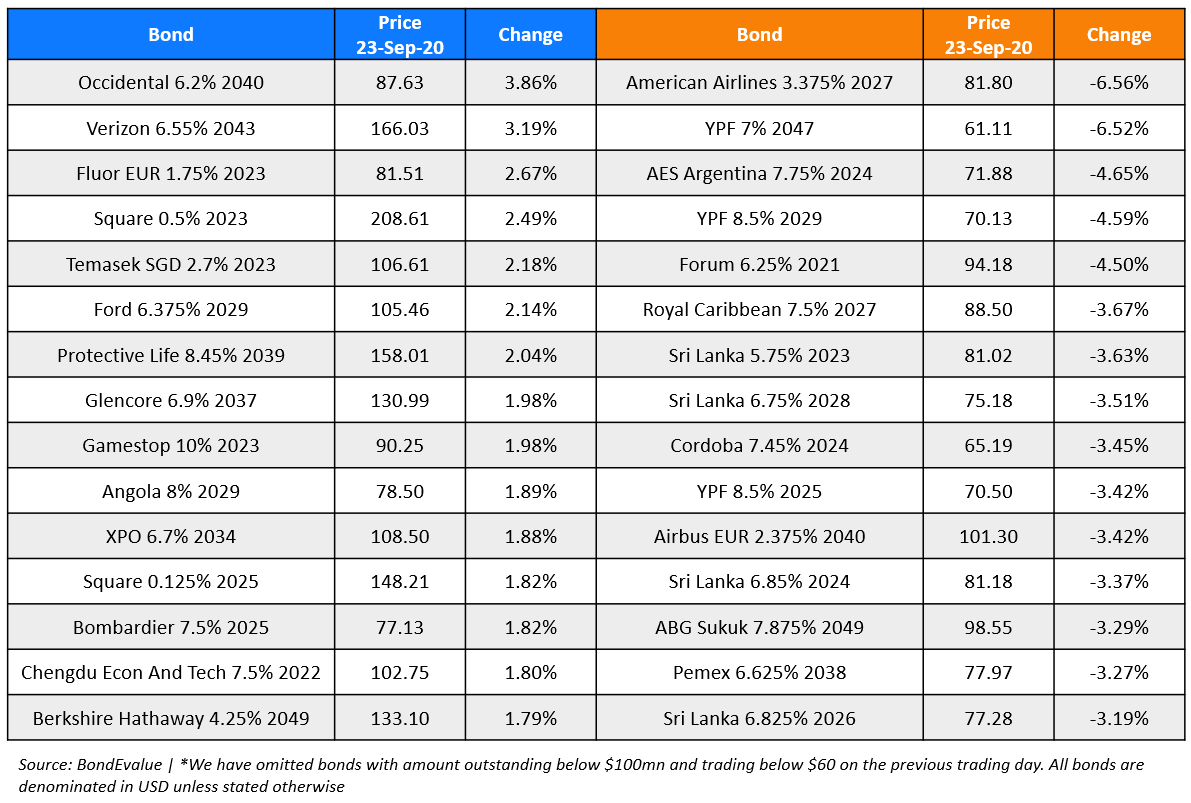