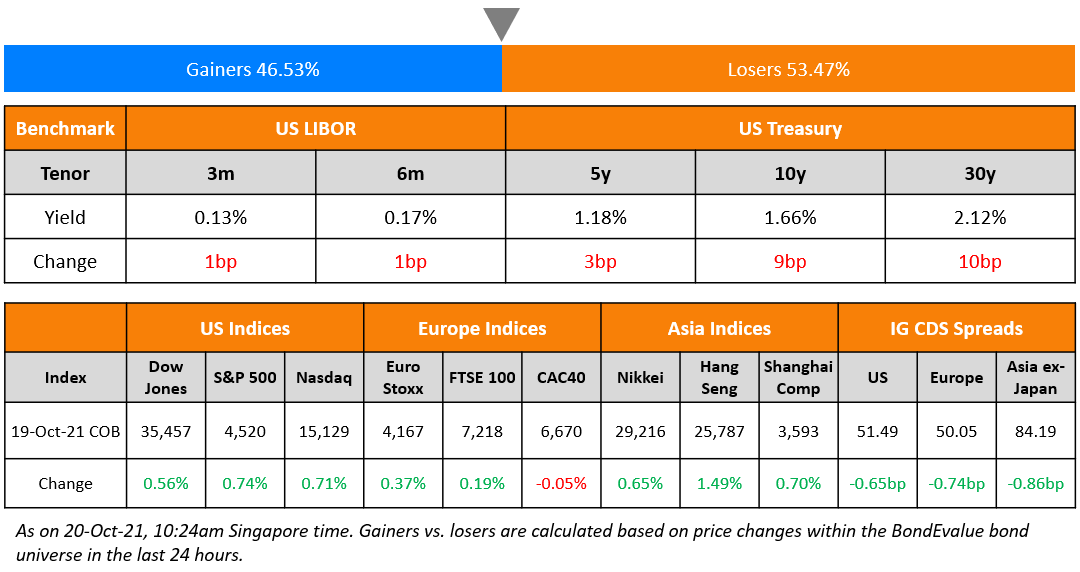 US equities moved higher again with the S&P and Nasdaq up 0.7% each as the risk-on sentiment continues. Barring Consumer Discretionary which was down 0.3% all sectors were in the green led by Healthcare, Utilities and Energy, up over 1.1-1.3%. US 10Y Treasury yields eased 1bp to 1.58%. European stocks were less buoyant with the DAX up 0.3%, CAC flat and FTSE up 0.2% respectively. Brazil’s Bovespa ended sharply lower by 3.3%. In the Middle East, UAE’s ADX was 0.1% lower and Saudi TASI was up 0.3%. Asian markets have started on a mixed footing – Shanghai was down 0.2%, HSI up 1.4%, while the Nikkei and STI were up 0.2% each. US IG and CDS spreads were 0.7bp tighter flat and HY CDS spreads were 3.9bp tighter. EU Main CDS spreads were 0.7bp tighter and Crossover CDS spreads were 4bp tighter. Asia ex-Japan CDS spreads tightened by 0.9bp.

Carnival raised $2bn via a 7.5NC3 bond at a yield of 6%, unchanged from initial guidance of 6% area, and upsized from an original planned size of $1.5bn. The bonds have expected ratings of B (S&P). Proceeds will be used to make scheduled principal payments on debt during 2022 and for general corporate purposes. The new bonds are priced 38bp wider to its existing 6.65% 2028s that currently yield 5.62%.

Chengdu Hi-Tech Investment Group raised $300mn via a 5Y bond at a yield of 2.7%, 30bp inside initial guidance of 3% area. The bonds have expected ratings of Baa3/BBB (Moody’s/Fitch), and received orders over $1.55bn, 5.2x issue size. According to Moody’s, the issuer is 90%-owned by the Chengdu Hi-tech Administrative Committee on behalf of China’s Chengdu government in August. The remaining 10% is owned by the Sichuan Provincial Finance Department.

Rudong County Jinxin Transportation Engineering raised $80mn via a 3Y bond at a yield of 2.68%, 7bp inside initial guidance of 2.75% area. The bonds are unrated. The bonds are supported by a letter of credit from Huishang Bank. The issuer is a local government financing vehicle in Rudong county, Nantong city in China’s Jiangsu province that focuses on infrastructure construction and land development.

There are different types of bankruptcies in the US. Chapter 11 is know as the “reorganization” bankruptcy and is available to individuals, sole proprietorship, partnerships and corporations. Corporations file for chapter 11 so that they can continue to operate while being protected from creditors claims to collection activities and property repossession. Petitions to file for chapter 11 can be voluntary or involuntary. In the case of a voluntary filing, the debtor must provide a schedule that provides details of its financial position. Upon filing a voluntary petition for relief under chapter 11 or, in an involuntary case, the entry of an order for relief, the debtor automatically assumes an additional identity as the “debtor in possession.” Once the petition is filed, there is an automatic stay order that suspends all judgments, foreclosures, collection activities, and property repossessions by creditors that arose before the petition. The bankruptcy court requires debtors to propose a restructuring plan within 120 days from the date of filing, which then grants the debtor another 180 days to obtain confirmation of the restructuring plan. The plan is deemed to have been accepted by courts if it is accepted by creditors with at least two-thirds in amount and at least half of the number of allowed claims.

“We want the government to see our disagreement and anger and pressure HNA . . . to adjust and redraft a fair proposal”

“This is a result that the CPC Central Committee and the State Council absolutely do not want to see!”

“Our dignity cannot be trampled on! We will never give up”

“The problem now is where is even the income in my fixed income?”

It’s still possible to find some value hidden in marketplaces with a global perspective, but investors need to be cautious in reaching for yield as “you may get your arm chopped off”. He added, “Markets have likely seen their secular, long term lows in interest rates,” and the outlook for rising yields is “likely to provide a negative sign in front of 2022 total returns for bond holders”.

“If rates spike between now and year-end, you have to buy the dip on bonds…We will have to live with easy monetary policy for the long term and this keeps me very confident that rates will not rise too high.”

“We expect that the combination of strong recovery prospects for CCC rated companies and less supportive governments and financing conditions would lead the strongest companies to be upgraded and the weakest to default”.

“While there is still room to improve on the employment leg of our mandate, I believe we have made enough progress such that tapering of our asset purchases should commence following our next FOMC meeting, which is in two weeks… I believe the pace of continued improvement in the labor market will be gradual, and I expect inflation will moderate, which means liftoff is still some time off 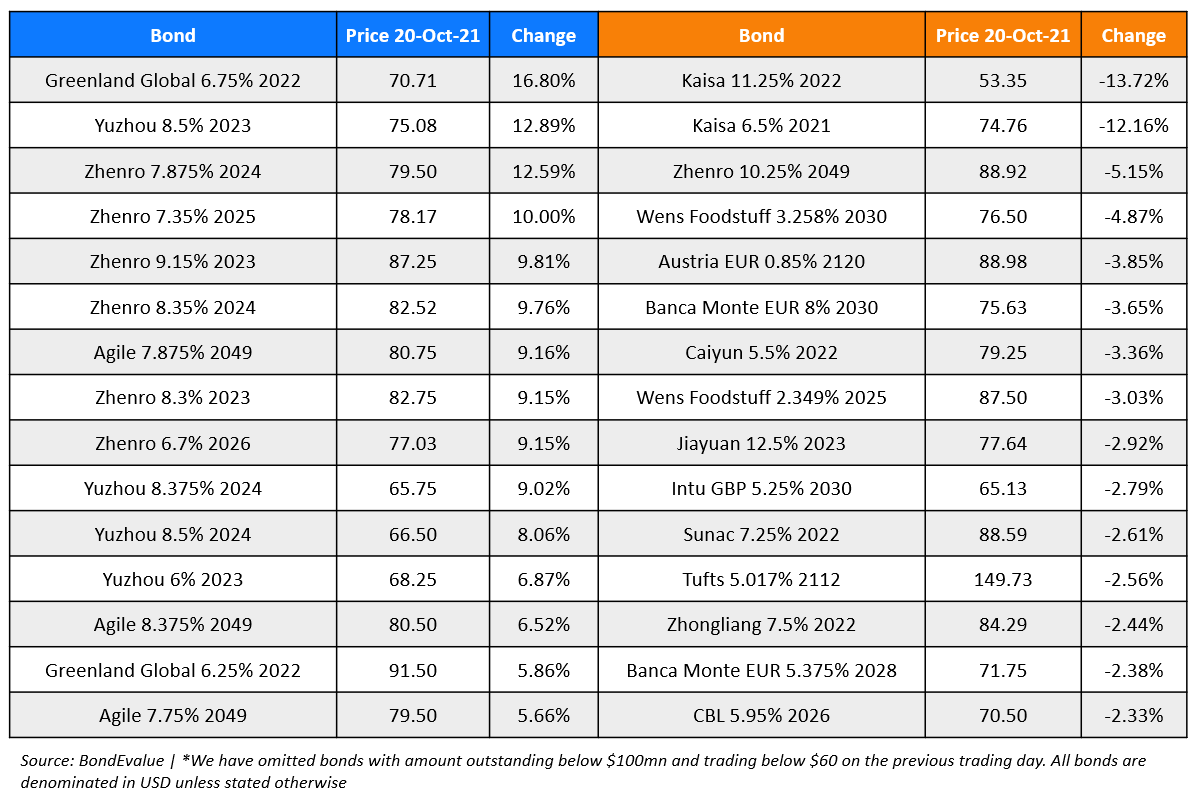