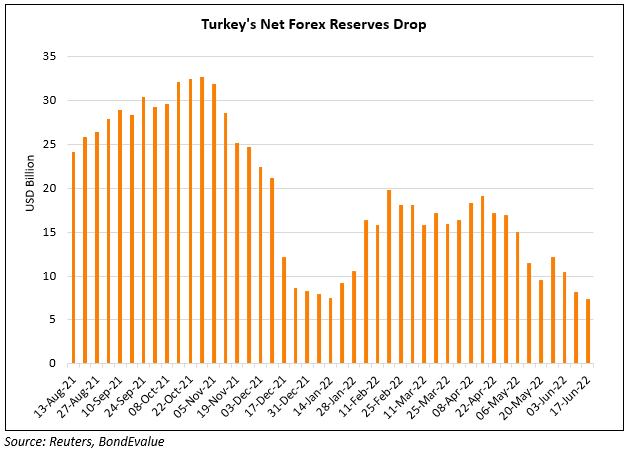 Turkey’s central bank net forex reserves fell from $8.15bn a week ago to $7.38bn, the lowest it has been in 20 years. The dwindling reserves are expected to raise investors’ concerns over the country’s ability to service its sovereign debt. Reuters notes that in recent years, Turkey’s forex reserves have dropped significantly, most recently due to considerable market intervention during its currency crisis in December 2021. The Turkish Central Bank has since sold $30bn of its forex reserves into the market since December, on top of $128bn in 2019-20, to support the lira. Despite selling reserves to keep the lira up, the Turkish currency still lost 44% of its value against the dollar last year and has further dropped 24% so far this year. While the central bank has been trying to curb the fall in the lira with reserves, the monetary policy on interest rates is divergent – cutting rates even as inflation has soared.