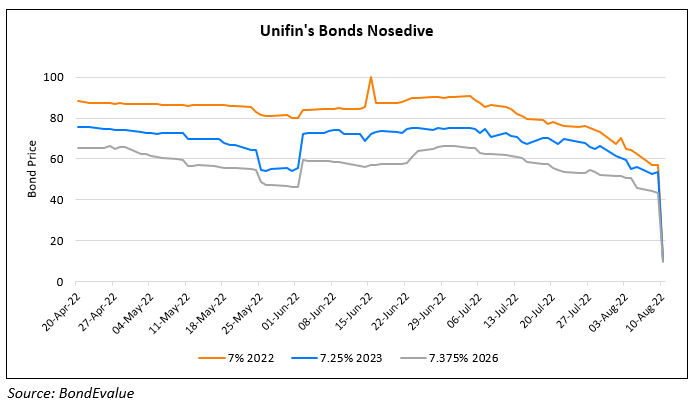 Mexico’s largest non-bank lender, Unifin has suspended all coupon and principal payments on its debt as it seeks to “negotiate definitive agreements with (Unifin’s) shareholders in relation to a strategic restructuring.” Reuters noted that earlier this year, Unifin had already agreed with bondholders of its $200mn dollar bond on a maturity extension, stretching the bonds’s due date from August 2022 to May 2024. Despite this early signal that Unifin was liquidity starved, the announcement of the repayment suspension still came as a shock to investors. Omar Zeolla, an analyst at Oppenheimer & Co Inc. said, “This doesn’t make sense unless the company’s liquidity and funding situation were much worse than management made it out to be…A better approach would be to present the situation as it really is and begin to work with creditors for a solution. Now I expect any confidence in the company’s management to be gone.” The surprise of Unifin’s limited financing is also heightened in light of a $500mn credit line that it received from Credit Suisse in June. The news of the debt pause sent Unifin’s bond prices tumbling with its shorter dated bonds plunging ~43-46 points and its medium term bonds falling ~31-24 points. All its dollar bonds maturing before 2029 are now trading at ~9-12 cents to the dollar.

Additionally, S&P downgraded Unifin by eight notches, from B+ to D calling the company’s debt freeze a general default because it does not expect Unifin to pay its principal or interest payments within the applicable grace periods. S&P also anticipates there will be no payment resumption until Unifin comes to a restructuring agreement, despite its expression of intent to comply with payment obligations. Based on its second-quarter earnings release, the Mexican firm has MXN 79bn ($3.94bn) in liabilities.