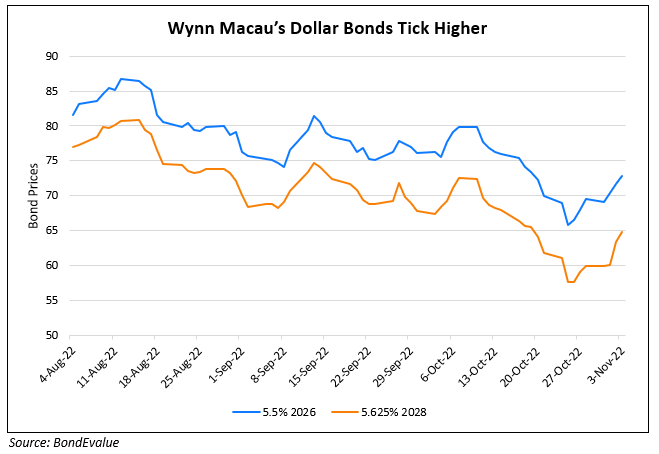 Dollar bonds of Wynn Macau were up 4-7% after it was reported that billionaire Tilman Fertitta acquired a 6.1% stake in the company, making him the second largest individual investor. As per Bloomberg, Fertitta is known to have a deep understanding of the gambling and hospitality industries and his stake is said to bode well for the company which has seen its revenues hit by China’s Covid restrictions.

Separately, MGM Resorts reported a net loss of $577mn compared to a net income of $1.4bn during the same quarter last year. Revenues stood at $3.4bn, up 25% YoY. It said that revenues improved thanks to increased business volume and travel activity primarily at its Las Vegas Strip Resorts. However, it reported an operating loss of $1bn as a result of a $1.2bn increase in its amortization expense for its Macau properties due to changes in laws in the region. MGM saw sales increase and profits at its US properties, however, its Macau business is unprofitable, due to China’s travel limitations to the region. MGM’s USD 5.875% 2026s were down 0.4 points to 78.75, yielding 13.68%.