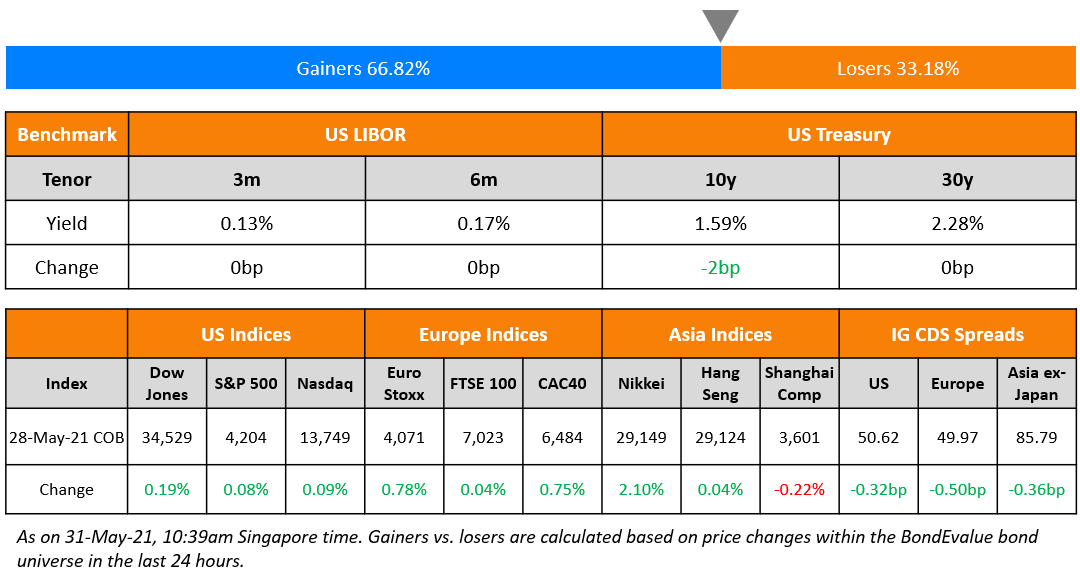 Both S&P and Nasdaq advanced 0.1% to conclude a fourth straight month of gains before the US closed for a long weekend to celebrate Memorial Day. Real Estate and Utilities led the gains while Media, Entertainment and Telecom dragged the indices lower. The markets will be keenly looking out for the May jobs report later this week. US 10Y Treasury yields fell 2bp to 1.59% with a higher month-end extension (Term of the day, explained below) even as inflation rose with Core PCE at 3.1% vs. 2.9% forecasted. European markets ended higher with DAX and CAC up ~0.7% while the FTSE was almost flat. US IG CDS spreads were 0.2bp tighter and HY spreads were 1.4bp tighter. EU main spreads were 0.5bp tighter and crossover spreads tightened 2.9bp. Asian equities are off to a soft start, down ~0.2% with Asia ex-Japan CDS spreads tightening 0.4bp.

3 Days to Go: Exclusive Masterclass on How to Analyze CoCo/AT1 bonds by Experts

Do you invest in CoCo/AT1s? If yes, do attend the upcoming masterclass conducted by debt capital market professionals Pramod Shenoi, Head of Research APAC at CreditSights and Rahul Banerjee, Founder and CEO at BondEvalue. The session will cover understanding the AT1 structure, common features & covenants, and how to pick the right AT1 bond(s) for you. Click on the banner below to register. 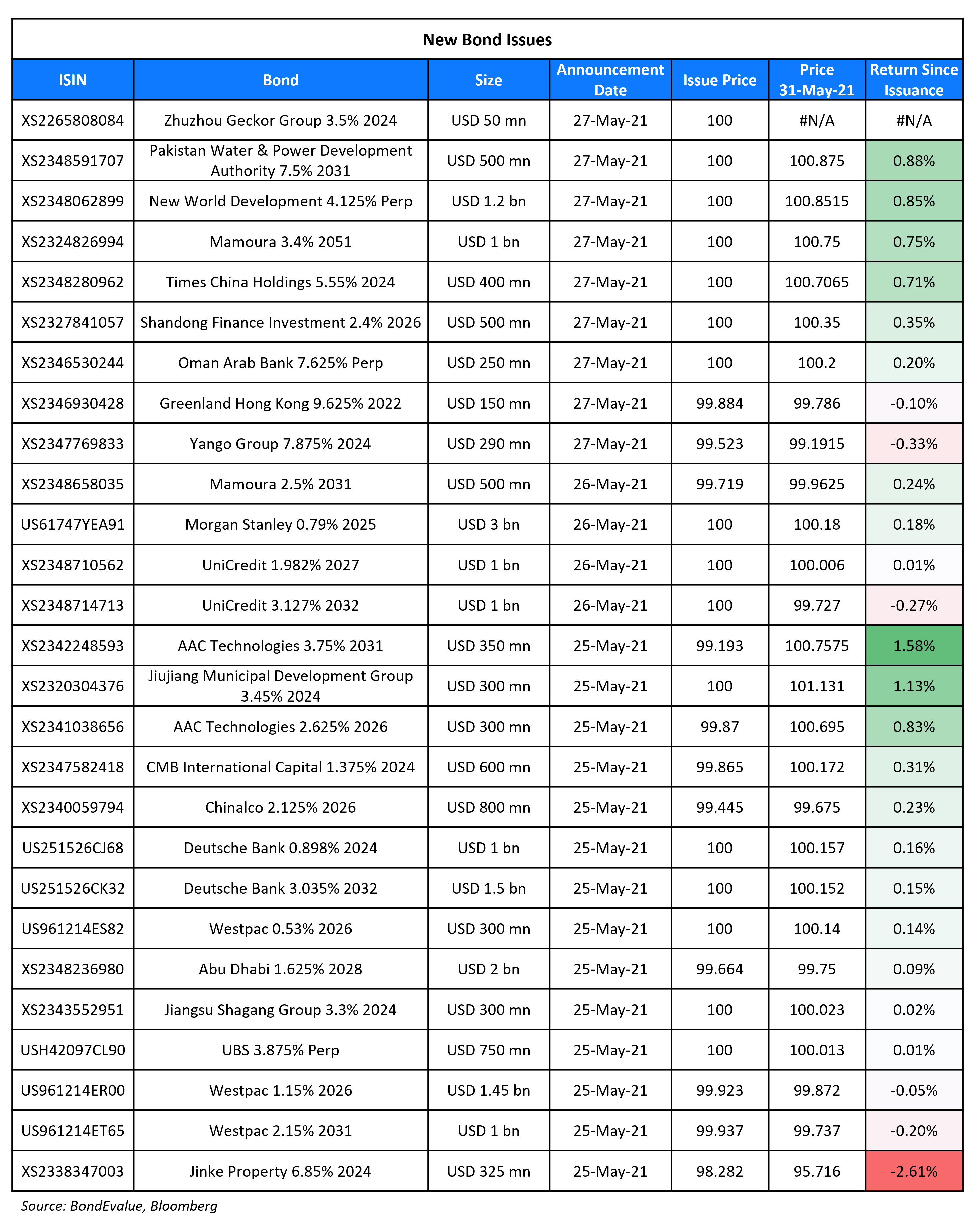 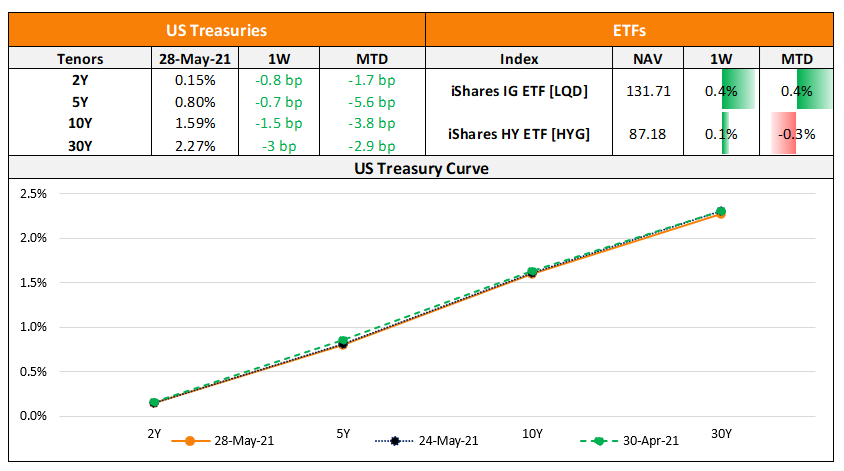 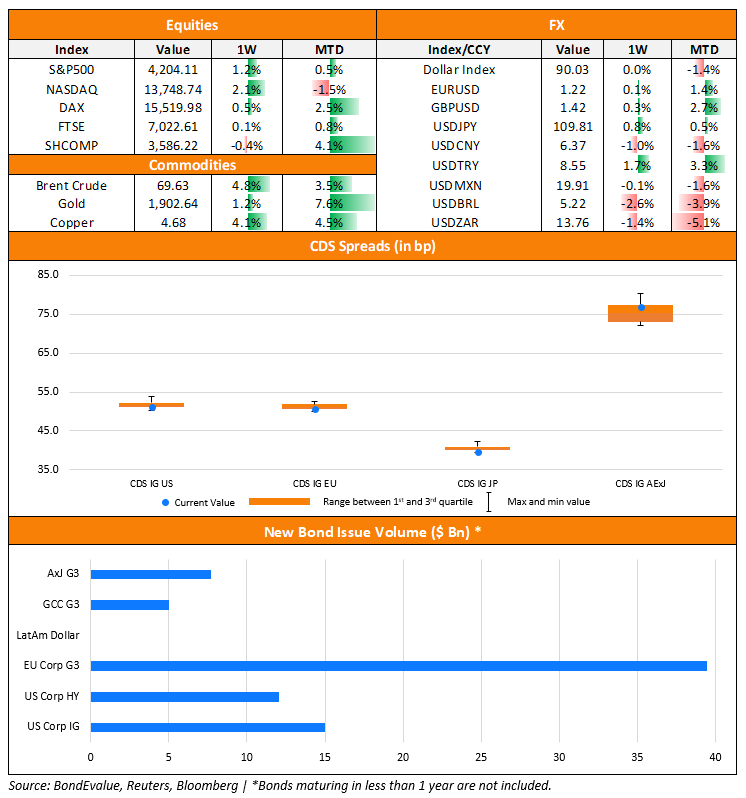 Month-end extensions are a rebalancing mechanism at the end of each month by fund managers to make sure that the portfolio tracks the benchmark index. These are sometimes also known as index extensions. Bond portfolios generally track an index and have mandates on the overall portfolio duration. But due to the sheer number and size of investments, the portfolio can have tracking errors. For example, if interest rates go higher, the portfolio’s duration falls. If the duration falls such that the portfolio doesn’t track the benchmark index’s duration, the fund manager would have to buy bonds to increase their portfolio’s duration. These purchases of bonds generally happen towards the end of the month leading to a month-end extension effect.  Reuters reports “Barclays estimating its duration index extending out 0.13 years, higher than the long-run average of 0.09 years which means asset managers need to buy Treasuries to hit that index.”

“Just because you care, doesn’t mean you don’t also have to count.” “I am worried in both the short- and the medium-term about overheating.” “I am concerned,” Summers said. “You do have to manage the macroeconomics right.”

On bond investors watching upcoming payroll report for clues on tapering
Credit Suisse Group AG strategist Jonathan Cohn
“Progress toward achieving the dual mandate should be the biggest factor” driving decisions about policy tightening, said Cohn.
John Briggs, global head of desk strategy at Natwest Markets
“The risks in the market are asymmetric toward higher yields.” “After last month’s payroll figure, economists are being conservative this time, so there’s a chance the actual figure is above consensus. And after that, people will then start to worry about the next consumer price report.”
On government bonds bringing calm to bond markets despite inflation fears
Matt King, global markets strategist at Citigroup
“The paradox is that the more successful central banks are in driving up valuations of risky assets using stimulus, the harder it becomes for them to exit.” “It is much more likely that rising yields prove destabilising as there is more debt outstanding.”
Steven Blitz, chief US economist at TS Lombard
“The Fed says it has the tools to fight inflation, and it does.” “Is it willing to accept the end of capital market pricing distortions that their policies have created?”
On the plan to reform the US debt funding process
Zoltan Pozsar, Global Head of Short-Term Interest Rate Strategy at Credit Suisse
“If the US financial system were a Boeing 747 flying through a fiscal storm, it’s been flying with three engines (JPMorgan, Citibank and Bank of America), and the fourth engine — Wells Fargo — has been offline.”
Manmohan Singh, senior economist at the International Monetary Fund
The imposition of a Treasury CCP would “cram more of the most important market in the world into already too-big-to-fail institutions ultimately puttable to the taxpayer.” “That would require greater scrutiny by the Fed and maybe the guarantee of further liquidity lines.”
On Turkey’s lira hitting an all-time low – Tatha Ghose, an FX strategist at Commerzbank
“Each burst of depreciation risks triggering a fresh lira crisis as it begins to feed back into higher inflation, which the central bank cannot fight off because it is unable to ‘credibly’ hike rates (due to Erdogan’s opposition).” “Because of its inability to hike rates properly, (the central bank) relies on inflation to cool off via external or other factors so that it can enjoy even a short period of stability.” 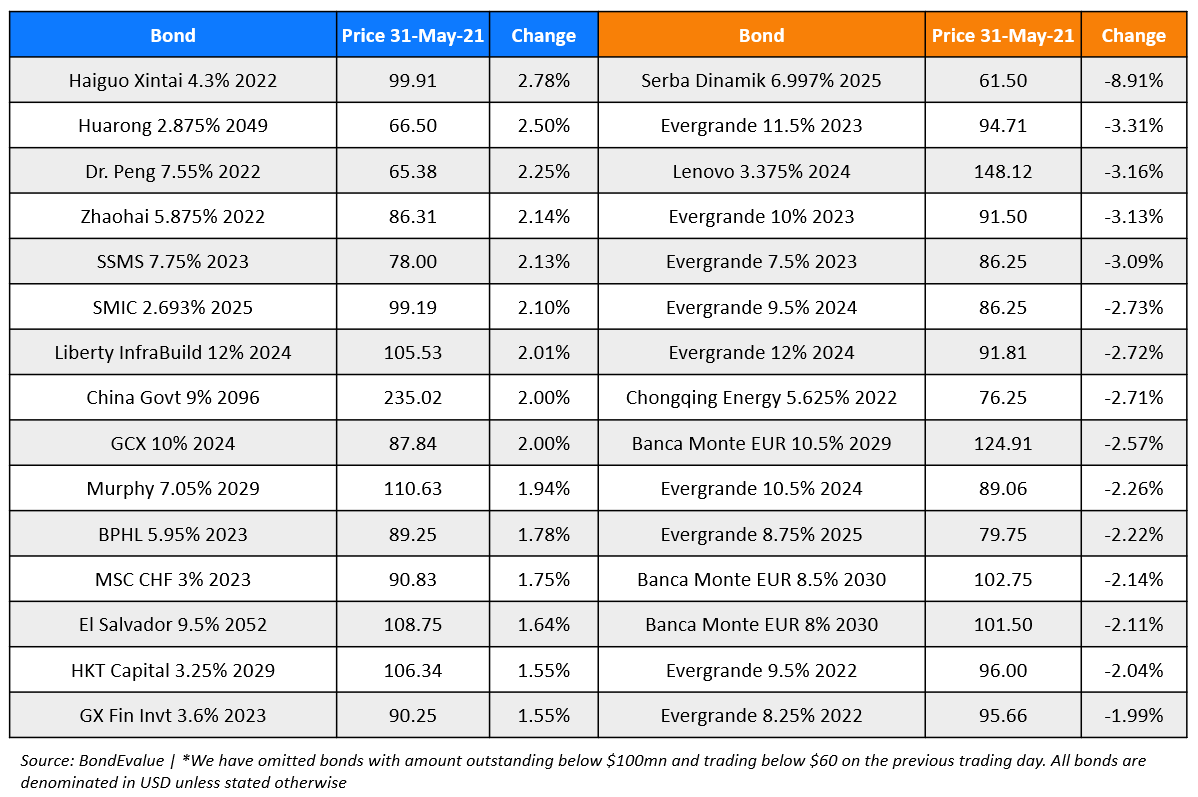