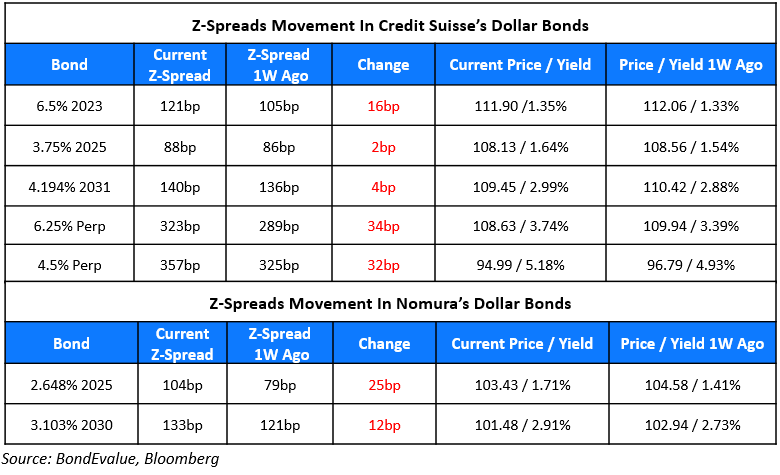 Banking majors Credit Suisse and Nomura warned of ‘significant’ losses due to forced position unwinding on account of Archegos Capital Management’s margin call defaults. Credit Suisse said that this could have a “highly significant and material” impact on its first-quarter results. To put a number to it, two sources said it could be at least $1bn with another saying it could go as high as $4bn. Similarly, Nomura also warned of a “significant” potential loss at its US subsidiary and cancelled its $3.25bn bond issue, which was priced last week. A source said Nomura’s losses from this could amount to $2bn.

Bill Hwang’s Archegos was at the center of a margin call over the last few days that led to the forced liquidation via block trades of more than $20bn in shares on Friday. Among the shares sold were those of ViacomCBS, GSX Techedu, Baidu and Discovery. Bloomberg reports that the leverage used by Archegos was provided by banks including Nomura and Credit Suisse through swaps and contracts-for-difference (CFDs). As the leveraged positions turned unfavorable, margin calls were triggered with banks like Goldman Sachs and Morgan Stanley forcing Archegos to sell billions in investments. JPMorgan analyst Kian Abouhossein said potential losses from Archegos could derail Credit Suisse’s $1.6bn share buyback program with this event following its Greensill episode. Morgan Stanley has not come out yet with any update while Goldman said it expects an immaterial impact from the Archegos event. Meanwhile Deutsche Bank avoided losses with their spokesman saying “We are managing down the immaterial remaining client positions, on which we do not expect to incur any loss.” Prices and Z-Spreads of Goldman, Morgan Stanley and Deutsche Bank bonds were little changed.

Credit Suisse’s stock is down 13% while Nomura’s stock is down 17% since Friday. Both companies’ bonds have fallen with Credit Suisse’s USD 4.5% Perp down 2.4 cents to 95 cents on the dollar since Friday while Z-Spreads of their Perps have widened over 30bps as seen in the table below. Similarly, Nomura’s USD 2.648% 2025s are down over 1.1 cents to 103.4 cents on the dollar with its Z-spread 25bp wider.