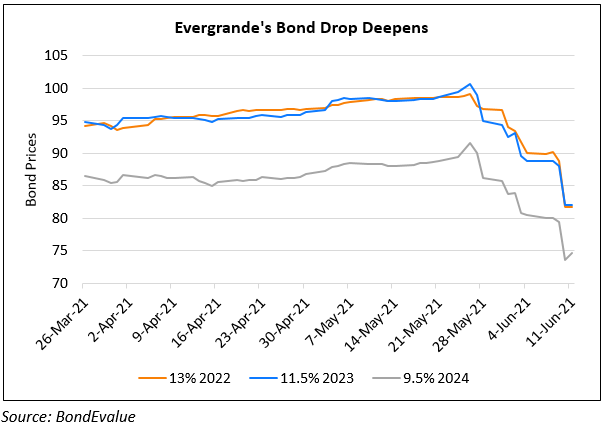 China Evergrande’s dollar bonds slipped 5-8% on Thursday as concerns grow over its financial position taking the total drop to more than 15% since the beginning of this month. Evergrande is the world’s most indebted property developer with $305bn in liabilities including over $20bn in outstanding dollar bonds. Evergrande’s bonds have been under pressure in recent weeks after Caixin’s WeNews reported that the regulator CBIRC was investigating over CNY 100bn ($15.7bn) of transactions between the company and Shengjing Bank Co. More recently, sources said that regulators asked banking creditors to perform stress tests with regard to their Evergrande exposure. Earlier this week, Evergrande confirmed that its business with Shengjing was in line with laws and denied that regulators had asked banks to perform stress tests. They added that they were planning to meet at least one of the three red-lines metrics by June after breaching all of them last year. Despite all the efforts of the company, investor confidence has dwindled as this is the third high profile name witnessing pressure after China Fortune Land Development and China Huarong.

As per SCMP, CBIRC’s chairman Guo Shuqing yesterday warned, “Those individual investors who participate in trading [of high-risk products] are indeed taking a gamble. They are set to suffer losses, just like those who believe property prices will never fall. At the end, they will pay a big price”.