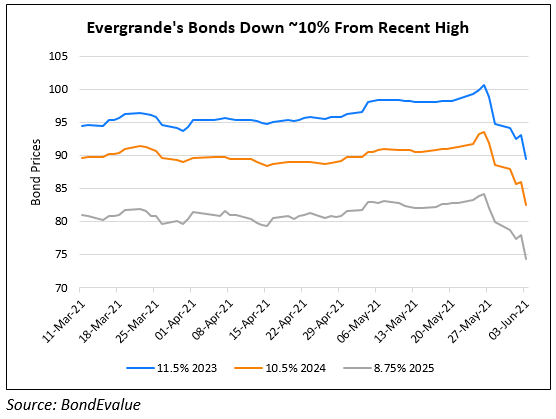 Dollar bonds of Evergrande fell further with many of its bonds falling a further ~4% on Thursday. This comes after a down move in its bonds through the past week on news that the CBIRC had launched a probe into its transactions with Shengjing Bank Co. Evergrande in a statement said that its interest-bearing liabilities are expected to fall below CNY 600bn ($94bn) by June end, from a high of CNY 874.3bn ($137bn) last year. They said that they were planning to meet at least one of the three red-lines metrics by June after breaching all of them last year. Evergrande’s cash covers only 0.47x of their short-term debt and their net-debt to equity stands at 158% as per its March-end numbers.