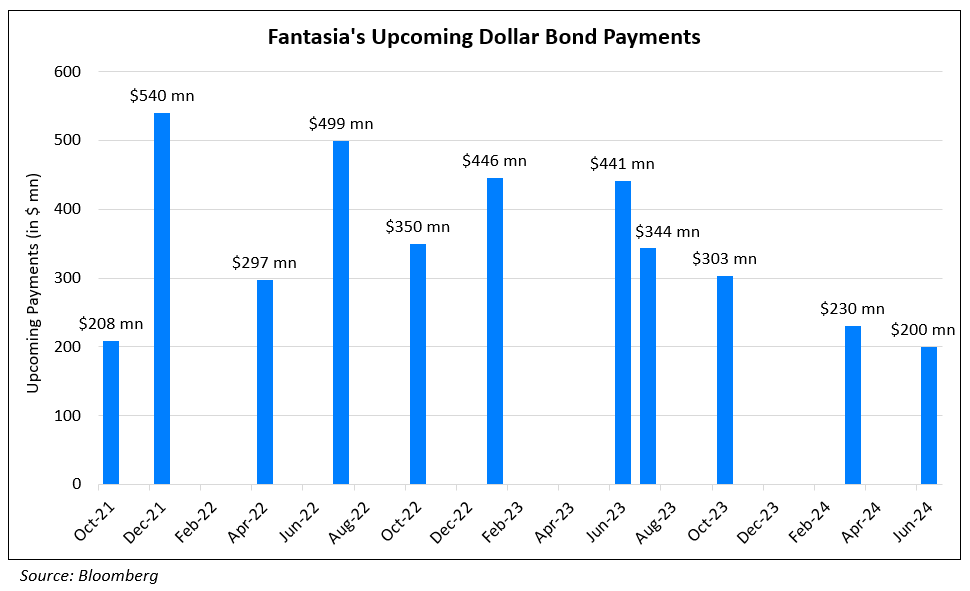 Chinese property developer Fantasia Holdings Group clarified via an exchange filing on Monday that there has been no delay in repaying its offshore senior bonds due, in response to market rumors. The company said, “Operating performance is good with sufficient working capital and no liquidity issue”. This comes just days after Fitch downgraded Fantasia to B from B+ with a negative outlook on September 16 citing lower than expected 1H2021 implied cash collection and uncertainty over refinancing of a significant amount of its dollar bonds maturing through 2022 on the back of market volatility. Before that, S&P on September 14 lowered its outlook on the developer to negative (ratings affirmed at B). Moody’s too has a negative outlook on Fantasia since July 16. The chart below shows the upcoming dollar bond maturities of the developer. It has about $752mn due this year with $208mn due on October 4 on its 7.375% 2021s that have fallen from ~98 on September 15 to 92.73 currently.
Its dollar bonds witnessed a sharp selloff earlier this month with its 10.875% bonds due 2023 dropping 21 cents to ~53 on September 6. Around the same time, there were reports of private banking units of Citi and Credit Suisse not accepting Fantasia bonds as collateral anymore over increased concerns of its financial position. In a bid to calm investors’ nerves, Fantasia has been repurchasing small quantities of its dollar bonds, buying back ~$6mn of five dollar bonds since mid-August, but the selloff in its bonds continues with the 10.875% 2023s now at 44.5 cents on the dollar.