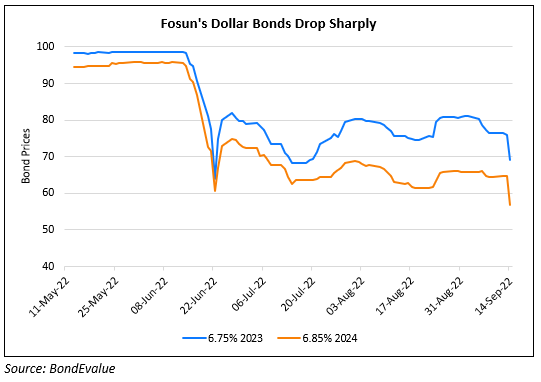 Fosun International’s dollar bonds fell as much as 10% after reports said that China’s regulators asked its biggest banks to examine their exposure to the conglomerate. It was also reported that state-owned enterprises (SOEs) were asked to begin a round of checks on their financial exposure to Fosun.

However, Fosun’s CFO Alex Gong Ping has denied the reports, saying that neither of the two regulators, the CBIRC and SBIRC “have asked commercial banks to find out about Fosun’s financial exposure, and those institutions have not received any notice of this”. Regarding the SOEs evaluating their exposure, he said, that it was a “routine information collection work by the Beijing Sasac system, without any specificity”. He further went on to say that the company is financially healthy and that the rumored news was targeted across Chinese enterprises and not just Fosun. As of end-June 2022, the Chinese conglomerate had total liabilities of RMB 651bn ($94bn) while its cash and cash equivalents stood at RMB 117.7bn ($16.9bn). The CFO said that while the company’s total debts were large, they were primarily under its listed or unlisted units while its “own debts” were much lower than that amount. Fosun’s dollar bonds have been under pressure in recent times since it launched a tender offer for its EUR and USD denominated bonds with caps. Besides, the company was later downgraded by Moody’s to B1 from Ba3 in August highlighting refinancing uncertainties and execution risks related to its asset sales.