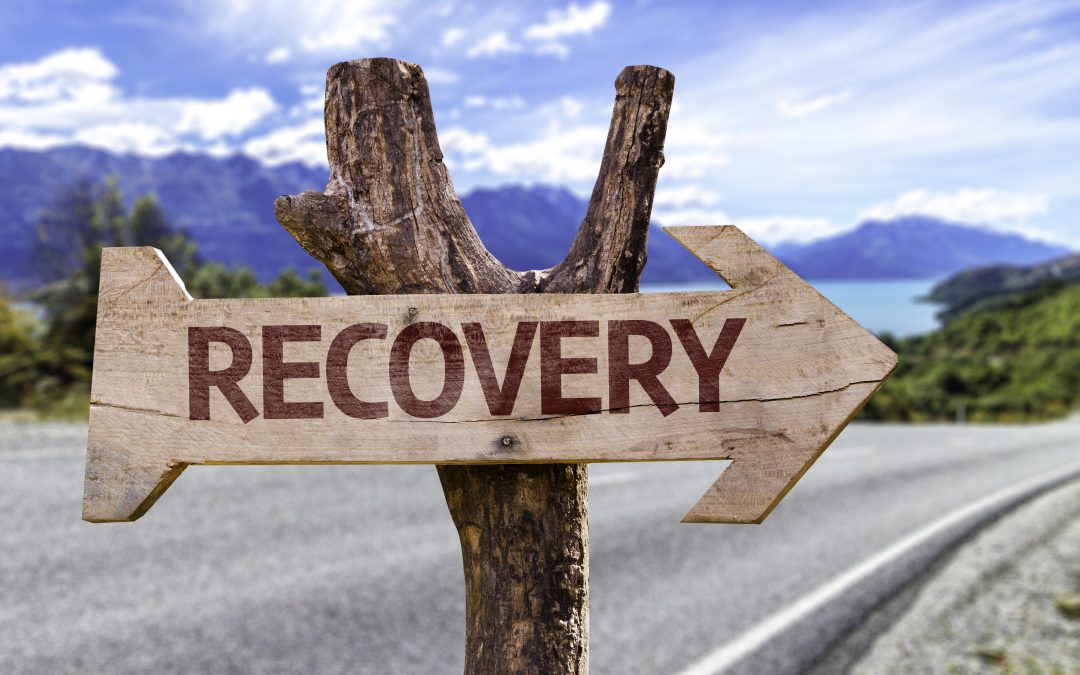 July has been a month of recovery for the bond market, with $ 10.1 billion added to the market value of all US dollar bonds in the BEV universe. This accounts for almost a quarter of the $ 45 billion lost in the first half of 2018, as reported in our previous newsletter. 53.5% of the bonds in the BEV universe increased in price in July, compared to 3.6% in the first six months of 2018. Of the $ 10.1 billion, $ 7.9 billion is attributable to high yield bonds, as compared to $ 2.1 billion attributable to investment grade bonds. 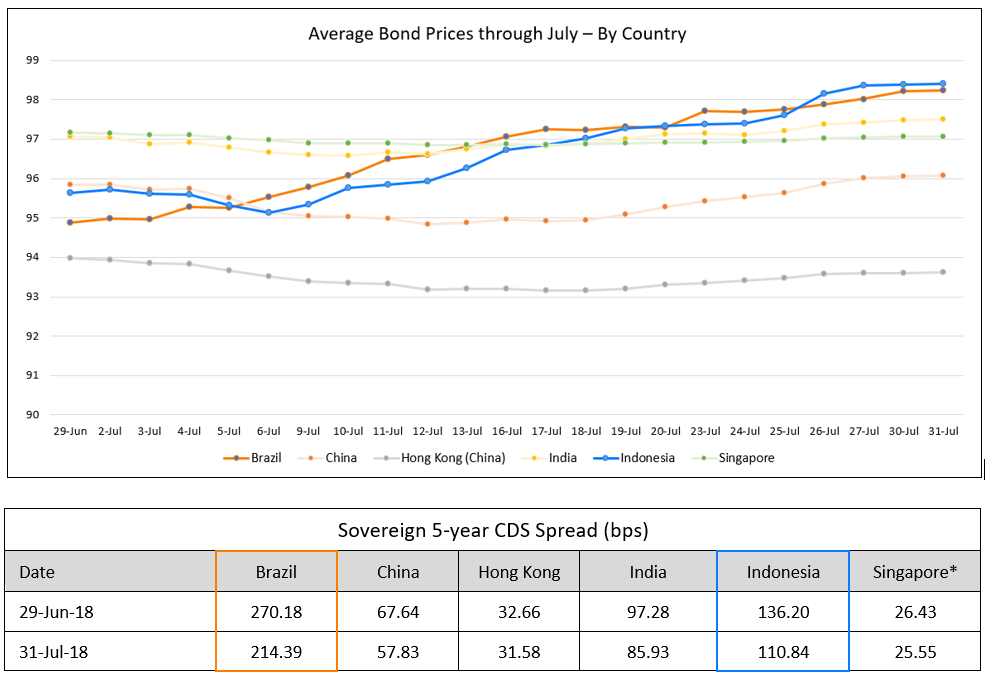 Source: BondEvalue, Bloomberg |*Temasek CDS as a proxy for Singapore

Another segment of the market that stood out in July was sovereign bonds. The 137 sovereign bonds in the BEV universe had a median return of 2.3% in July (price return excluding coupons). We used a boxplot to chart sovereign bond prices as on 29-Jun-18 and 31-Jul-18, classified by rating category. Each boxplot displays the range of bond prices within a category, with the mid 50% of values in the colored box and 25% of the values above and below the box. The horizontal line inside the box indicates the median price for that category (50% of bond prices above and below the line). 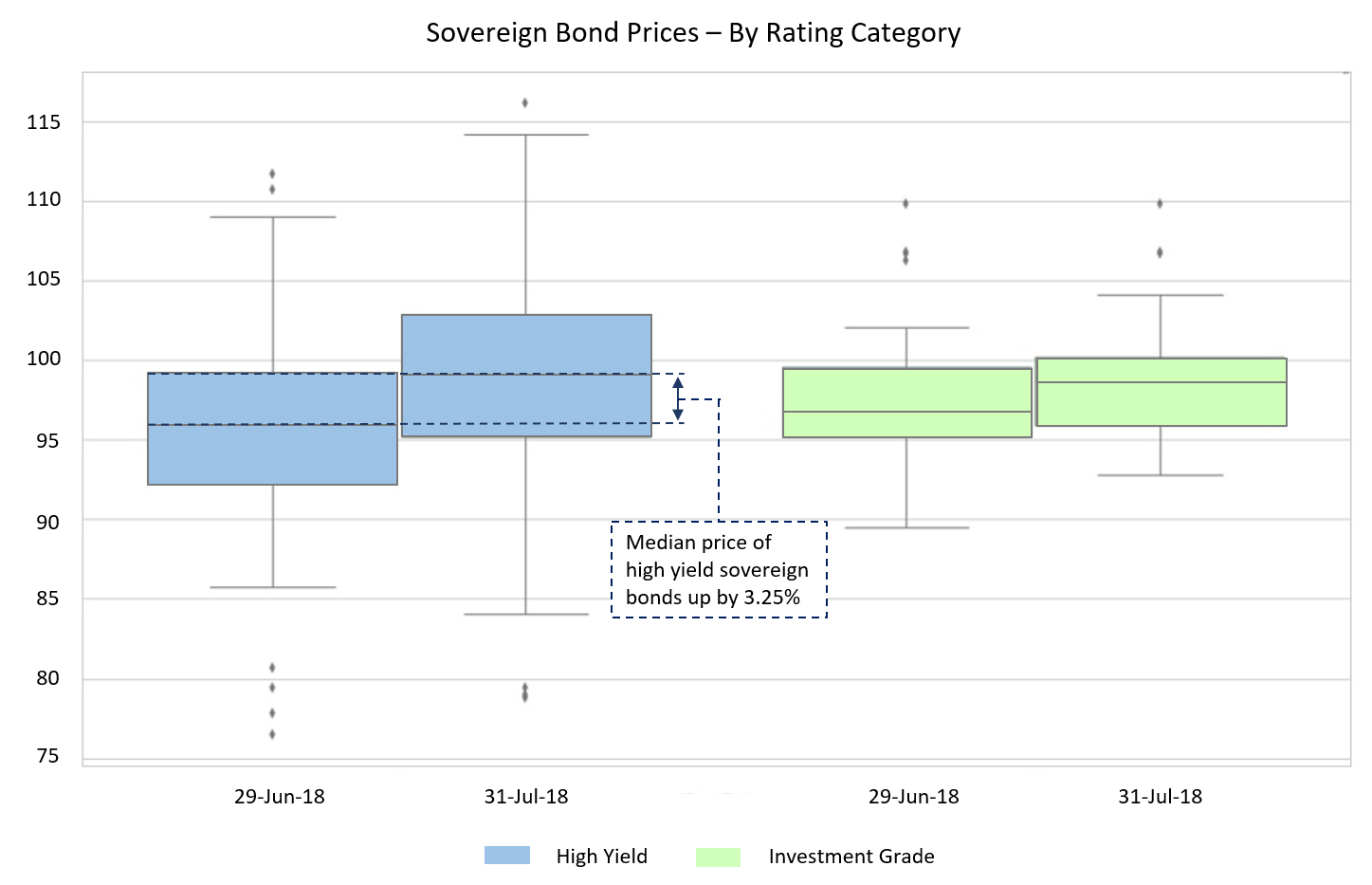 Source: BondEvalue |*We have omitted bonds trading below $70 as those bonds were distorting the boxplots

The jump in sovereigns was led by high-yield rated countries such as Pakistan, Ecuador, Brazil, Kenya, Ghana and Senegal, among others, underlining investors’ pursuit of yield.

We have plotted the spread between the 10-year and 2-year US Treasury yield against the Fed Funds Rate, covering the last three US recessions. The Fed Funds Rate has a direct impact on the short-end of the Treasury curve, given that both, the 2-year and the Fed Funds are competing investments in the money market. As seen from the chart below, inversions in the yield curve have historically taken place towards the end of the Fed rate hike cycle. This is evident from the (a) early 1990s recession (b) dot-com bubble of 1997-2001 and (c) global financial crisis of 2007-2008.

As per consensus estimates, the US Fed is slated to hike rates twice in the remaining five months of 2018 – with the next hike after its September meeting – followed by three hikes in 2019 as per consensus estimates. However, this trajectory would be contingent on the continued strengthening of the US economy, as gauged by economic data releases.

In its most recent Federal Open Market Committee meeting over 31 July – 1 August, the central bank left its benchmark overnight lending rate unchanged in a range of 1.75-2%, but characterized the economy as strong, reiterating the plan to gradually hike rates.

US economic growth has been rising strongly and the job market has continued to strengthen while inflation has remained near the Fed’s 2% target since its last policy meeting in June, when the central bank raised rates. Fed Chairman Jerome Powell gave a similar message in his semi-annual testimony to Congress in Mid-July, again confirming that the central bank is on track for further rate hikes in 2018 and 2019. A key data point to track will be the non-farm payrolls for July, which will be released on 3rd August after Singapore market hours.

In news from last week, the Bank of England also pushed interest rates above their financial crisis lows, but signaled it was in no hurry to raise them further as Britain heads for Brexit next year with no clear plan on leaving the European Union. The BoE’s nine rate-setters unexpectedly voted unanimously to raise rates to 0.75% from 0.50%, the level at which they have spent most of the past decade. Governor Mark Carney later said that one rate hike a year for the next few years was a good rule of thumb for the public, as long as there is no major Brexit shock for the economy.

Meanwhile, in Europe, the European Central Bank has stayed on course to end its bond purchases and reiterated its monthly policy to buybank assets until the end of 2018. The Frankfurt-based institution also pledged to keep interest rates unchanged until “at least through the summer of 2019”.  Surveyed economists predict a rate hike in September or October next year, with markets only pricing in a 10 basis points increase in rates at the end of 2019.

Japan’s central bank kept its monetary policy steady during iamid speculation that it would join the US, British and European central banks in tightening monetary policy. Yields on the 10-year Japanese government bond (JGB) jumped to an 18-month high of 0.145% before retreating to 0.120%.

Primary markets picked up steam in July after a subdued month in June, with Asia ex-Japan G3 currency issuance up 34% to USD 16.23 billion vs. USD 12.13 billion in June. Issuance was dominated by investment grade issuers from Japan, China, Korea and Singapore. The largest deal this month was the Credit Suisse 7.5% Perp (CoCo) at USD 2 billion, which is now trading a premium of 2.84 percentage points to yield 6.81%. 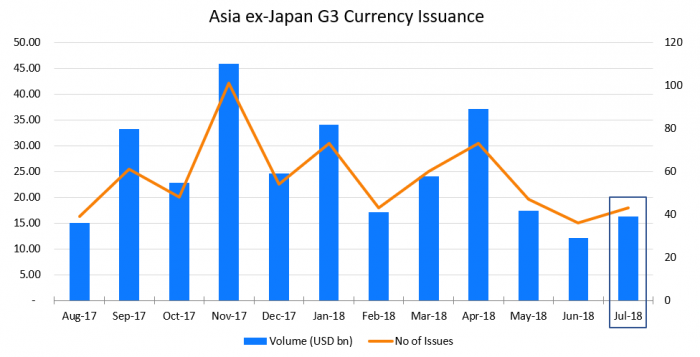 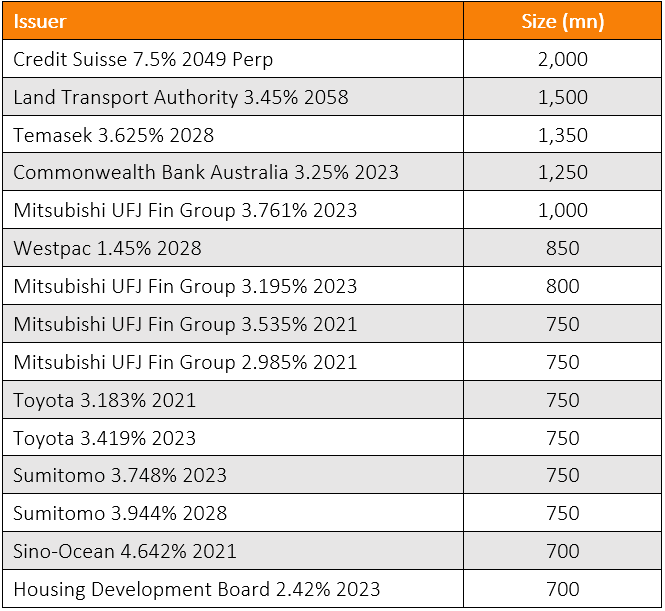 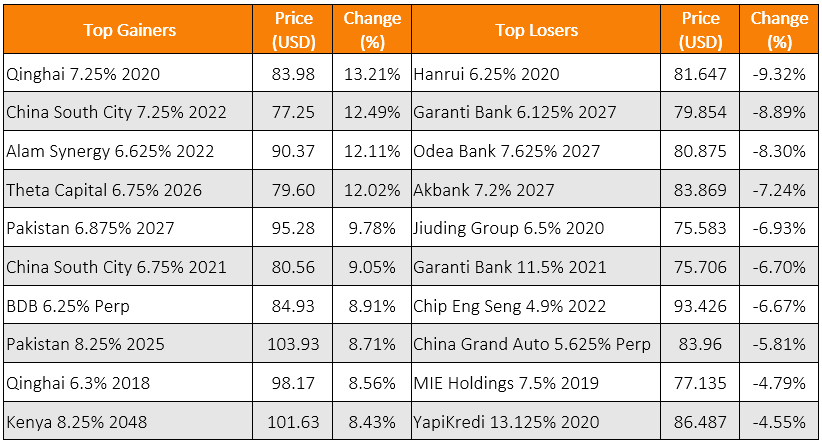 Source: BondEvalue | *We have omitted bonds trading below $75 as illiquidity distorts the change in prices

July has been a turbulent month for Turkey’s financial markets, given the freefalling currency. The lira has depreciated by 28% over the last 12 months on the back of mounting inflation (CPI for June at a 15-year high of 15.4%). This situation has been exacerbated by the political environment, with President Erdogan appointing his son-in-law to head Turkey’s finance ministry, and compounded by him expressing a desire for low interest rates.

All this led Fitch Ratings to downgrade Turkey’s credit rating to ‘BB’ with a negative outlook, pushing it further into junk rating from ‘BB+’. Fitch cited risks to macroeconomic stability on the back of Turkey’s widening current account deficit, rising inflation and heightened uncertainty with respect to economic policy as reasons for the downgrade. Fitch also placed 24 Turkish banks on Negative Rating Watch. Garanti Bank’s 6.125% bonds due 2027 have fallen by ~9% in July and are currently yielding over 10%.

It has been an eventful month for Pakistan as well, with former cricketer Imran Khan confirmed as the new Prime Minister. His political party emerged as the winner in the general election results last week, even though they fell short of an overall majority. Investors’ approval of Imran Khan was evident from the rally in the sovereign bonds, given that he has promised to tackle corruption and bring political reforms.

We are excited to announce that a new and improved version of the BondEvalue iOS App is now live on the App Store. Some of the new features are as follows: 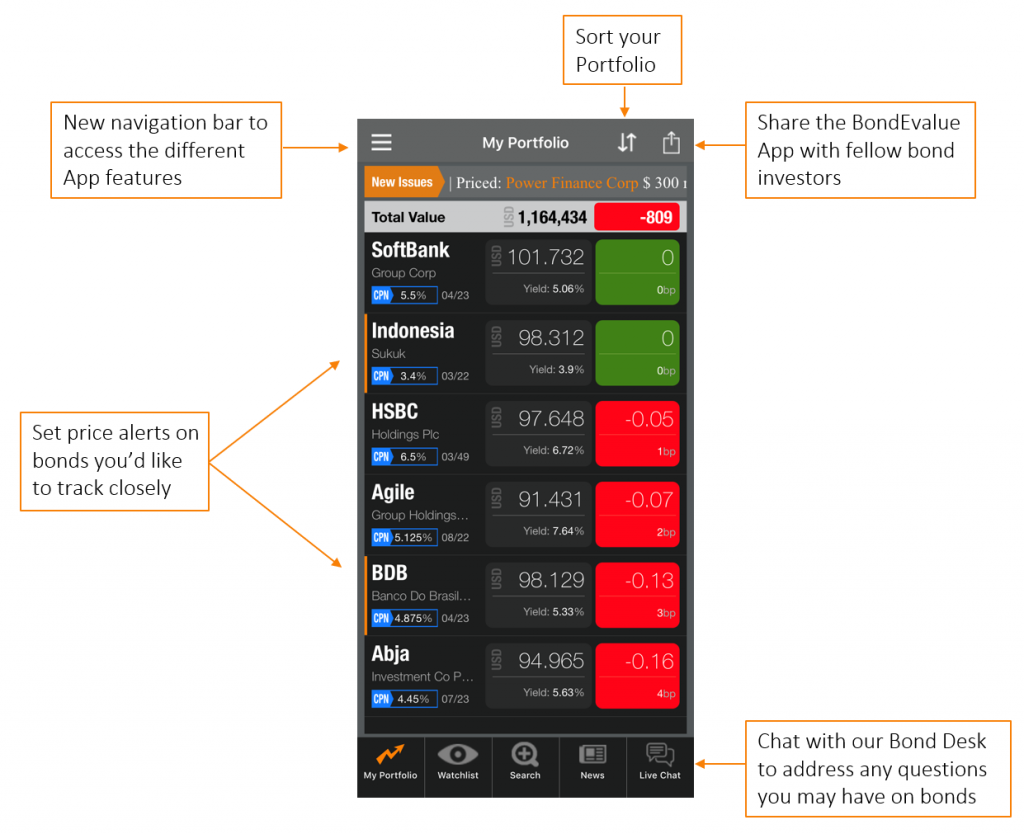 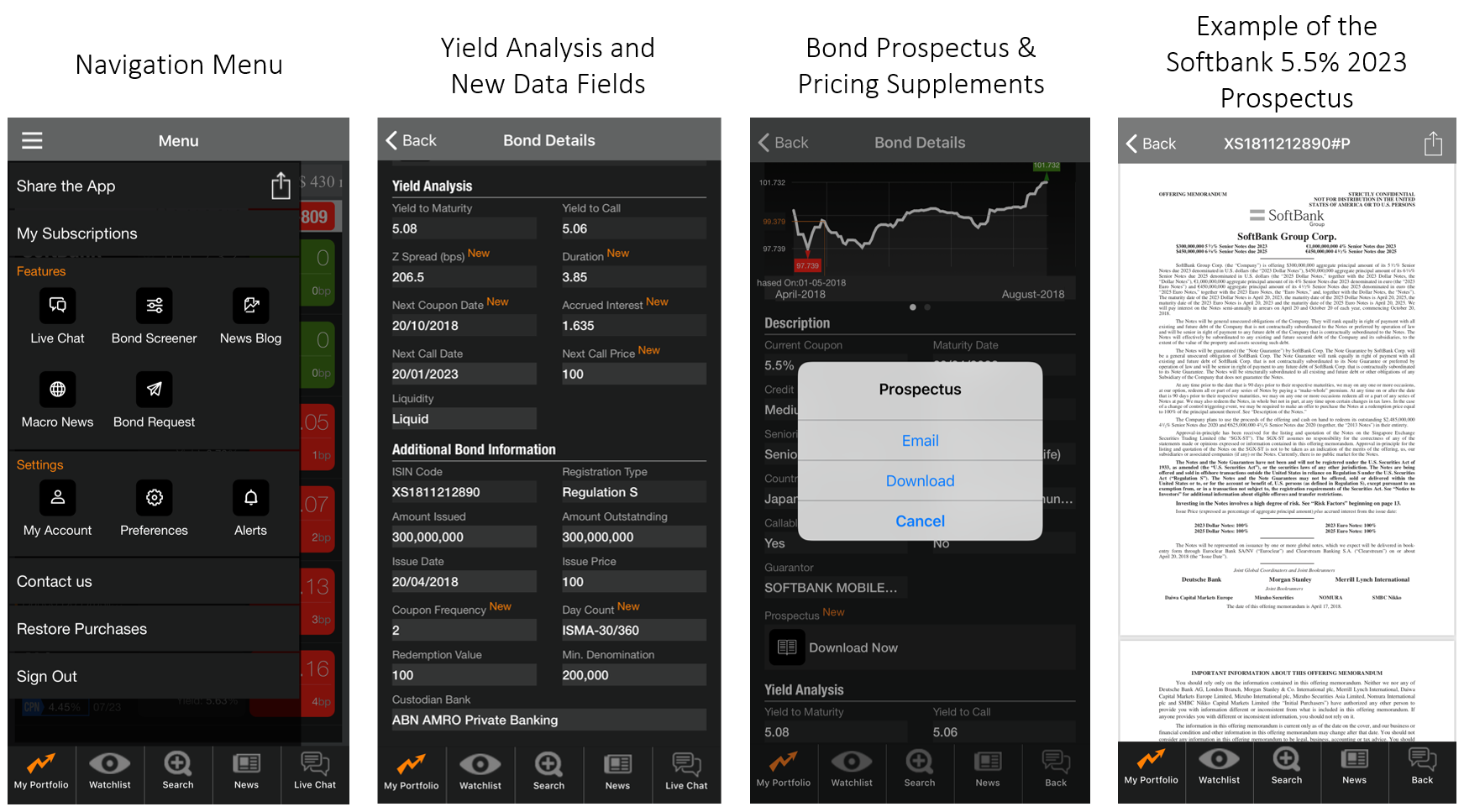 This Document (the “Document”) is being furnished solely for the benefit of the specified recipient for the purpose of providing information prepared by Bondevalue Pte Ltd. (the “Author”).

In considering any prior performance information contained in this Document, prospective investors should bear in mind that past performance is not necessarily indicative of future results.

Any projections or analyses provided in this Document to assist a recipient of this Document in evaluating the matters described herein may be based on subjective assessments and assumptions and may use one among alternative methodologies that produce different results. Accordingly, any projections or analyses should not be viewed as factual and should not be relied upon as an accurate prediction of future results.